Never Get the Kids to School Late Again 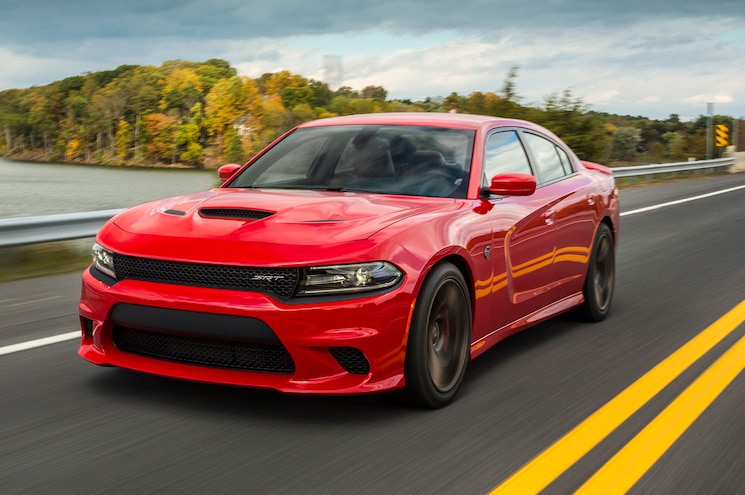 The world is full of numbers people, those who want to qualify the concept of "best" with cold, hard, irrefutable performance figures. For the numbers people among us, I present the Dodge Charger Hellcat. With the Charger Hellcat's supercharged 6.2-liter Hemi V-8 producing 707 hp, 650 lb-ft of torque, a claimed 0 to 60 mph time of 3.7 seconds, a quarter-mile run of 11.0 seconds flat, and a top speed of 204 mph, Dodge says you simply can't buy a faster, more powerful production four-door sedan. Nor have you ever been able to.
Dodge isn't lying. The current crop of super sedans is the fastest yet, but none can touch the Charger Hellcat's power output or top speed. The $181,295 Porsche Panamera Turbo S has "just" 570 hp and will "only" hit 192 mph, given enough road and bravery. The BMW Alpina B7? Roughly $130,000 to start, 540 hp, 194 mph. Mercedes-Benz' $224,625 S65 AMG super sedan is electronically limited to 186 mph, despite its 621 hp. The closest top speed rival is the $207,820, 552-hp Aston Martin Rapide S with a claimed 203-mph v-max. Of course top speed claims are really just bragging rights -- no one in the market for a four-door sedan is really running near double-century speeds -- but they're bragging rights nonetheless. 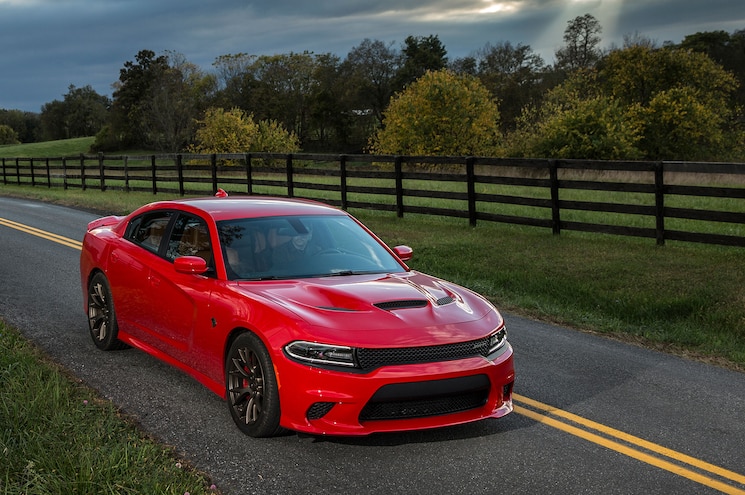 View Photo Gallery | 184 Photos
Photo 2/184   |   2015 Dodge Charger SRT Hellcat Front Three Quarter View 1
Besides bar boasts, the $64,990 base price you'll plunk down for a Charger Hellcat ($4,000 more than its Challenger sibling) will actually get you a pretty special car. Sure, there's a lot of novelty factor to the Hellcat -- many will be sold on the boasts alone -- but it's surprisingly drivable on real roads in real conditions. In fact, when I was invited to drive one on the strictly speed-enforced, 55-mph roads of West Virginia recently (in the pouring rain, I might add), the Charger Hellcat was perfectly docile. In fact, SRT vehicle dynamics chief Erich Heuschele told me a good amount of time was spent making sure the overall refinement of the Charger Hellcat was greater than that of the Challenger. To that end, the Charger version gets a bit more sound insulation than the Challenger does while also receiving slightly softer suspension tuning, thinner 32mm front/28mm rear hollow anti-roll bars, and active valves in the exhaust system that shut earlier to avoid freeway drone. Like in the Challenger Hellcat, the car comes with two keys: a red one that gives the full 707 hp and a black one that puts a cap at 500 hp when you loan your car to your idiot friend.
That means the Charger Hellcat has a real Dr. Jekyll/Mr. Hyde split personality. With the excellent new eight-speed TorqueFlite automatic transmission in "D" and the suspension and engine calibration in their Comfort settings, the Hellcat trundles around town with ease. On light throttle, the Hemi's V-8 burble is mellow and non-intrusive and shifting is handled quickly but with utter smoothness. Make no mistake, if temptation drives your throttle foot to the floor, all 707 horses are available in an instant, along with the manic roar that accompanies them. Cycle through Dodge's Performance Pages settings on the UConnect display, put the engine, transmission, and suspension in Sport mode, and the car comes to life, giving instant throttle response and 160ms paddle shifts, though the transmission is predictive enough that you won't often need to use them. 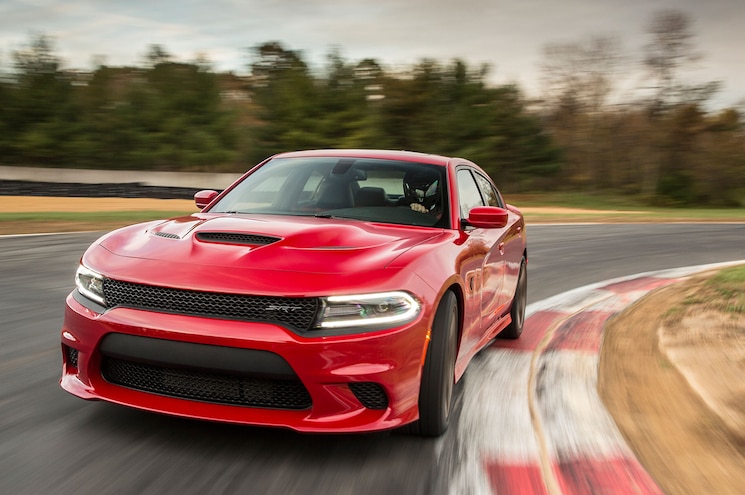 View Photo Gallery | 184 Photos
Photo 6/184   |   2015 Dodge Charger SRT Hellcat Front Three Quarter View In Motion 11
The winding West Virginian roads I drove, red key in pocket, led me to a very wet Summit Point Raceway, where a few laps in the rain showed not only how quickly the Hellcat's tail can swing wide with too much throttle on corner exit but also how quickly the stability control can rein in a yahoo driver with 707 horses to play with. Nevertheless, the Hellcat did a superb job of hustling around the small road course given the less-than-favorable conditions, and the Brembo brakes (six pistons in the front, four in the rear, two-piece rotors) did an admirable job, along with the three-season Pirelli P Zero tires, in hauling the car down from triple digits on the main straight.
You can love or hate the Charger's new styling (Dodge says the body stampings are all-new given how much has changed), but the new Dart-esque front end and tucked-in corners do wonders to shrink the Charger visually. Much attention was given to cooling that massive Hemi engine, so triple hood scoops can be found, along with extra venting in the front fascia. Overall, the Hellcat does appear as a bit of a sleeper, considering its capability.
From behind the wheel the Charger is clearly still a full-size sedan (it's tough to hide 4,600 pounds of curb weight), but behind the wheel is a nicer place to be, aesthetically. The contrasting black and red SRT-embossed upholstery and thin strips of real aluminum trim around the instrument panel and shift bezel are nice touches, but they might not quite be enough to rationalize the purchase of a Hellcat to your significant other. Should you be tempted to try anyway, the Dodge Charger Hellcat hits showrooms this spring. 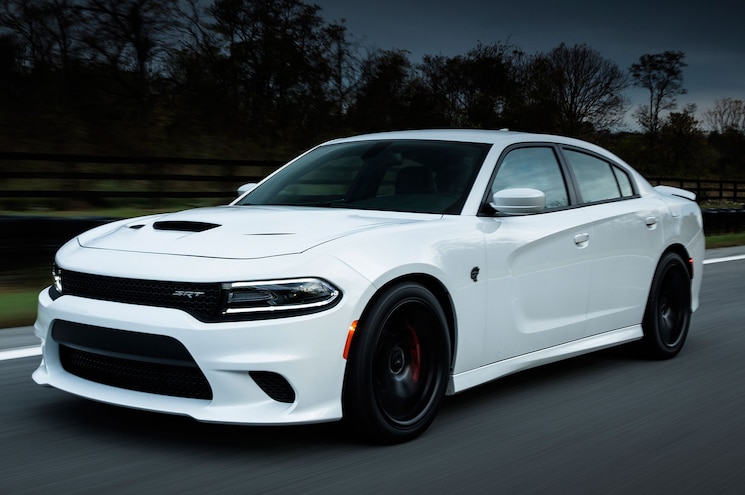 - OF
By Rory Jurnecka
266 Articles