Well, if Matthew McConaughey Drives One... 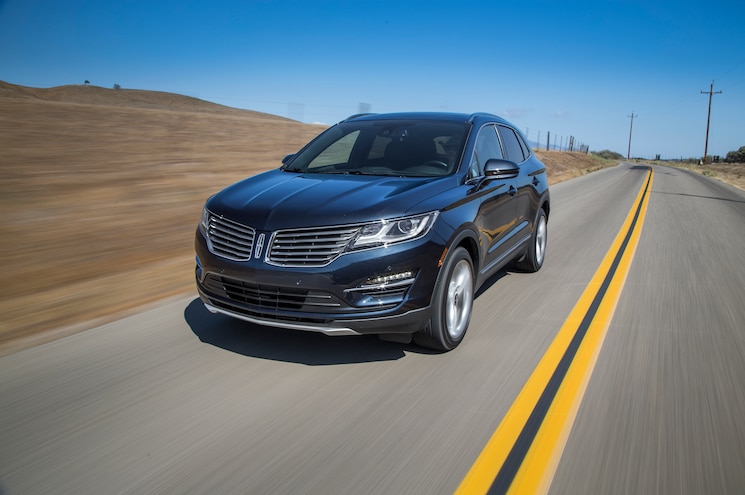 By now you’ve probably seen the TV spots of movie star Matthew McConaughey promoting the all-new Lincoln MKC crossover. (If you haven’t, view three here.) Whether you believe McConaughey would actually drive a Lincoln (he says he’s been driving one “long before anybody paid me to drive one”) or for that matter an MKC (it’s easier to envision the Longhorn alum in a Navigator, no?) is beside the point. Clearly, the newly dubbed “Lincoln Motor Company” is attempting to attract Gen X and Y buyers, those 30- and 40-somethings who not only relate to McConaughey and his films, but also have healthy incomes and, most likely, a family that necessitates a small luxury crossover, one of the fastest-growing segments in the auto biz. In other words, let’s get nontraditional Lincoln buyers into this nontraditional Lincoln.
I must admit, seeing McConaughey behind the wheel of a Lincoln crossover just feels weird. To me, he’ll always be Wooderson from “Dazed and Confused.” I mean, who can forget him talking about his prized Chevy Chevelle: “Let me tell you what Melba Toast is packing right here, all right. I've got 411 Posi-Trac out back, 750 Double Pumper, Edelbrock intakes, bored over 30, 11 to 1 pop-up pistons, turbo-jet 390 horsepower. We're talking some f#$%ing muscle.” (I recommend you YouTube this as well.) Good news for Lincoln is the MKC’s got some f#$%ing muscle of its own, thanks to the new EcoBoost borrowed from the 2015 Ford Mustang.
The Lincoln MKC is a 2015 Motor Trend SUV of the Year contender - find out whether the luxury crossover has what it takes to win later this month. 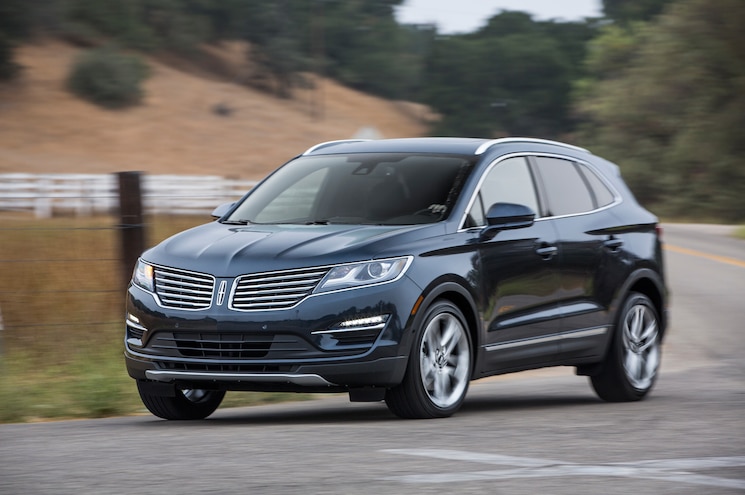 View Photo Gallery | 105 Photos
Photo 2/105   |   2015 Lincoln MKC 23 Front Three Quarter In Motion 02
Displacing 2.3 liters, the single turbo I-4 develops 285 horsepower and 305 lb-ft in the MKC, slight drops from the Mustang’s version of 310 horsepower and 320 lb-ft. Our all-wheel-drive MKC 2.3, weighing in at 4045 pounds, zipped from 0 to 60 mph in 6.5 seconds, on its way to a quarter-mile time of 15.0 seconds at 91.1 mph -- the same quarter-mile time put down by the BMW X4 xDrive28i. Wooderson’s ol’ 390-horsepower Melba Toast likely would have been about a second quicker to the quarter, given that a 450-horse Chevelle SS that Hot Rod magazine tested back in May 1970 needed 13.4 seconds at 108.2 mph. See, I told you the MKC had some f#$%ing muscle. Per associate editor Christian Seabaugh, “This 2.3 motor is potent as hell. The AWD MKC is really quick, really torquey, and real confidence-inspiring. Feels more Focus ST than Escape Titanium.” Alas, we found its six-speed automatic underwhelming, making us wish for a more intuitive gearbox with a couple more gears. Per senior features editor Jonny Lieberman, “The transmission feels lazy, which is too bad because the 2.3-liter with a great transmission could be a very compelling product.” 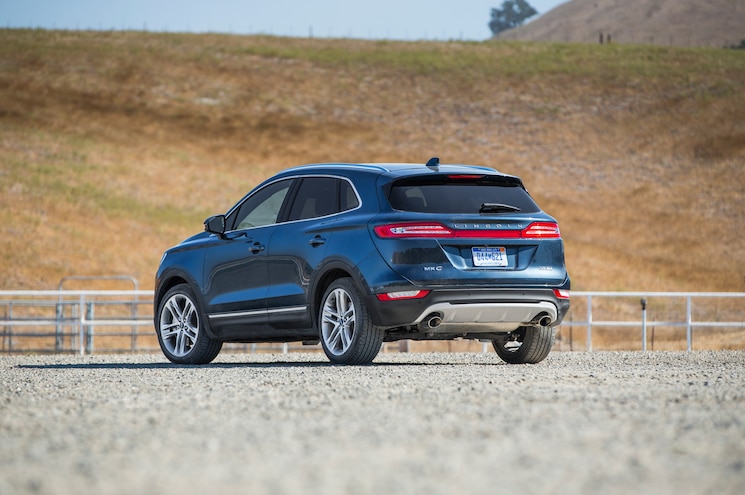 View Photo Gallery | 105 Photos
Photo 6/105   |   2015 Lincoln MKC 23 Rear Three Quarters
Speaking of compelling, the less powerful 2.0-liter MKC, which we tested in front-drive guise, proved less so. With 240 horsepower and 270 lb-ft motivating 3866 pounds, it returned runs of 7.6 seconds to 60 and 15.9 seconds at 87.4 mph in the quarter -- respectable but not nearly as engaging or fun as the 2.3. In our handling and braking tests, the 2.0 again proved respectable -- 0.80 g max lateral acceleration, a 27.9-second figure-eight run, and 60 to 0 in 123 feet -- but not as stout as the 2.3, which recorded 0.84 g, 26.7 seconds, and 118 feet, respectively. While editor-in-chief Ed Loh viewed the FWD 2.0 as “tight and well-damped, with a surprising mix of smooth and sporty,” the AWD 2.3 was rated higher and is the way to go if you’re looking for the utmost performance from your LiMoCo crossover, especially off pavement. As editor at large Angus MacKenzie noted, “The continuously variable torque split all-wheel-drive system works extremely well on the dirt. The AWD MKC strolled up the dirt hill from a standing start, and proved fast and flickable through the dusty turns.”
The MKC’s exterior design, a blend of Lincoln heritage up front, Audi Q5 in the back, and Ford Escape in profile, received mostly rave reviews. According to MacKenzie, “Exterior styling is mature and pleasant. The wing-grille stays the right side of parody, and the Audi Q5-style rear hatch (same style of cutlines to the side) gives the rear end graphic a broad, expansive stance.” Loh had this to add: “Exterior is stunning. Best modern Lincoln styling to date.” Still, in profile, the MKC’s A-pillar, wheelbase, and proportions suggest the down-market Escape. To that end, the radically penned Lexus NX does a better job concealing its fundamental roots (Toyota RAV4). 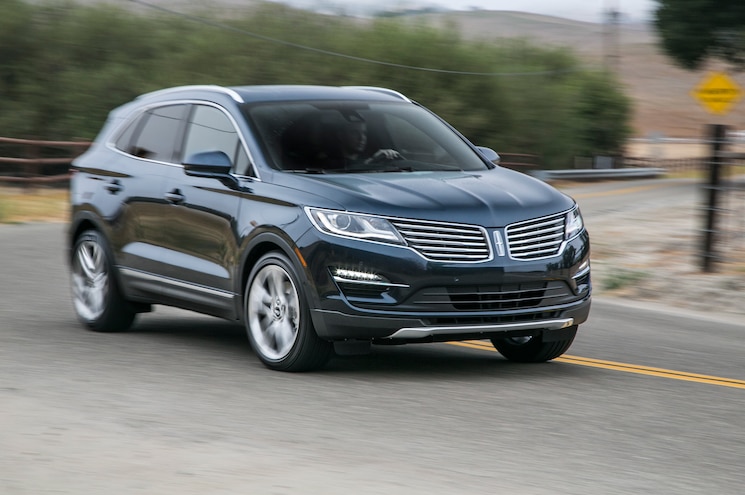 View Photo Gallery | 105 Photos
Photo 7/105   |   2015 Lincoln MKC 23 Front Three Quarter In Motion
From behind the wheel, the MKC was deemed a legitimate luxury player. Our editors were impressed with the quality of the wood, leather, and plastics as well as the clean, appealing, and uncluttered design. Per MacKenzie, “The interior is extremely well executed, with acres of soft-touch leather -- including a modern take on quilted door panels -- nicely restrained open-pore wood, and soft-sheen aluminum. It looks refined and upscale.” Still, some found the knobs lacking in quality and the infotainment screen too similar to that in a Fiesta. Associate editor Scott Evans observed, “Controls are a mixed bag. Some are good; some feel very cheap.” And all concluded the backseat too cramped for a four-door SUV wearing a Lincoln badge. “Back seats are about as useful as those in a Focus,” said Seabaugh.
In terms of value, our FWD 2.0 started at $33,995, but thanks to a $6935 Reserve 102A Package (leather/heated/cooled seats, 10-way power front passenger seat, auto-folding side-view mirrors, panoramic roof, navigation, hands-free liftgate, blind-spot system, and 18-inch polished wheels among other items), a $2235 Technology Package (adaptive cruise control, active park assist, forward sensing system, and lane-keep assist), a $995 THX audio system, and a few other options, the as-tested price swelled to $45,785. That’s a lot of dough for a fancy Escape, but there’s no denying that it includes a ton of kit, much of it useful and appreciated. Associate road test editor Carlos Lago observed, “I like the lane-keep assist philosophy: Doesn’t alert everyone in the car; it just vibrates the wheel and subtly pulls to the right direction.” Not surprisingly, the AWD 2.3 came with a steeper sticker price -- $37,630 to start and, with similar options as the 2.0, $49,265 as tested. For context, the 2015 Q5 3.0T starts at $45,825.
Whether McConaughey’s advertisements work magic for the MKC remains to be seen, certainly given the crossover just went on sale. But in August alone, the MKC found 1760 takers, not that far off the 2023 folks who bought a BMW X3. Clearly, the MKC is off to a good start. To that, I’ve got to think Wooderson would’ve said, “All right, all right, all right.” 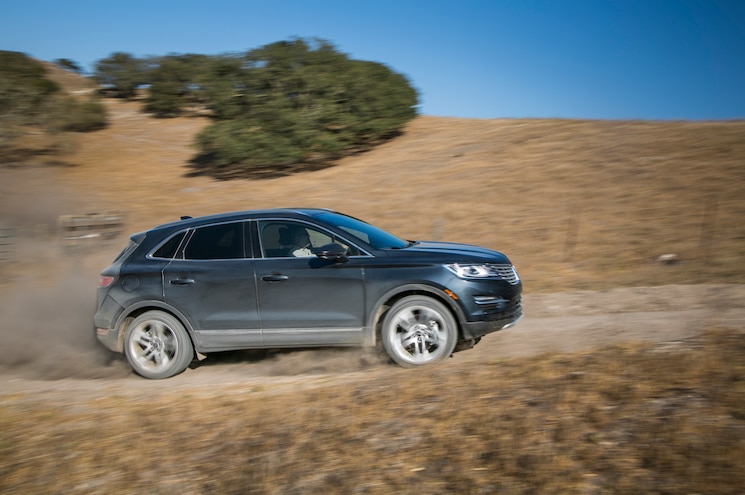