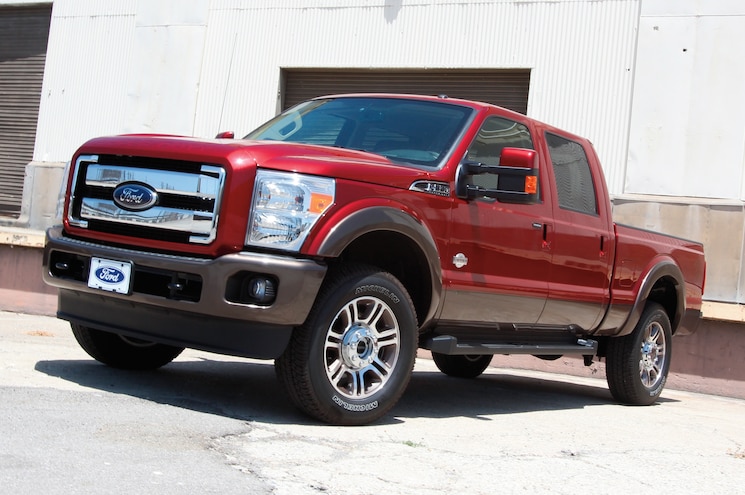 When you look at the shiny exterior of a 2015 Super Duty, you may not think that anything has changed. From the outside, it's the same truck that it has been since 2011. You'd be wrong. Under the hood now lives the heart and soul of the most powerful pickup on sale today.
In 2011, Ford introduced their first in-house diesel engine, the 6.7L Power Stroke. Now, four years later, we've been gifted the second generation of their creation. Thanks in part to a new turbocharger, fuel mapping, crankshaft, pistons, and oil cooling, this monster powerhouse now churns out an earth-shattering 440 hp and 860 lb-ft of torque. Lucky for us, but not for the rear tires, we were handed the keys and told to go have fun. 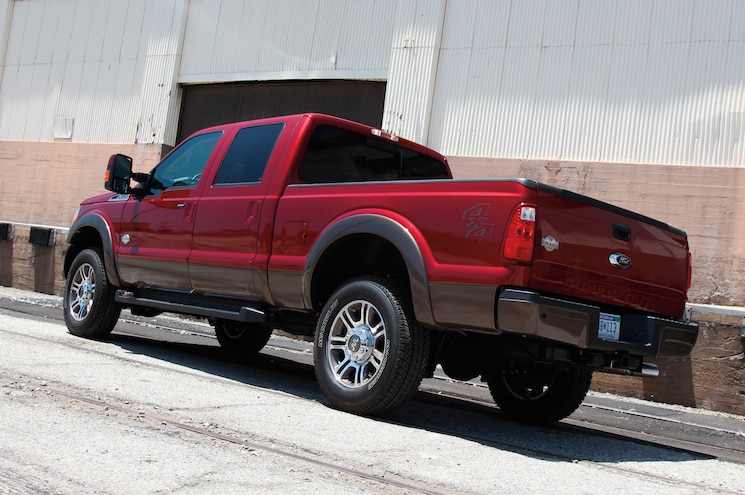 View Photo Gallery | 12 Photos
Photo 2/12   |   2015 Ford F 350 Super Duty Rear View
Having spent plenty of time behind the wheel of the previous generation Power Stroke, we were excited to see if it was going to live up to the hype. The first thing we noticed was an increase in off-the-line turbo lag. However, this was expected due to the larger single-compressor turbocharger that replaced the first generation's single-sequential unit. Once on it, the boost is subtle but noticeable. For an 8,000-pound truck, it moves quite briskly.
While the body and most interior trims have remained the same, the King Ranch model we were driving received new richer, more-premium leather, a redesigned King Ranch logo stitched onto the center console lid, and several new color options.
Our time with the 2015 Ford Super Duty was short lived and spent mostly unloaded. Where this truck really shines is hooked to a trailer, saddled with a load, or just plain doing work. Without a purpose, all the extra power is good for is shortening the lifespan of the rear tires.
Overall, the more powerful second-generation Power Stroke engine and the capabilities that it brings to the table excite us, and we can't wait to get our butts back on its premium leather. 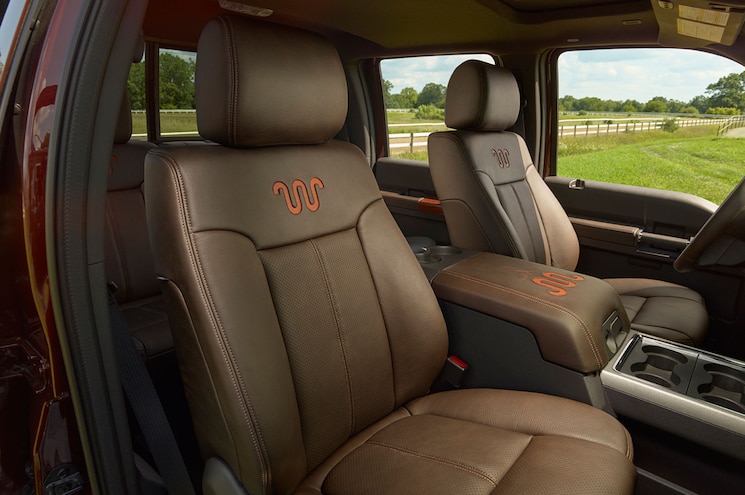 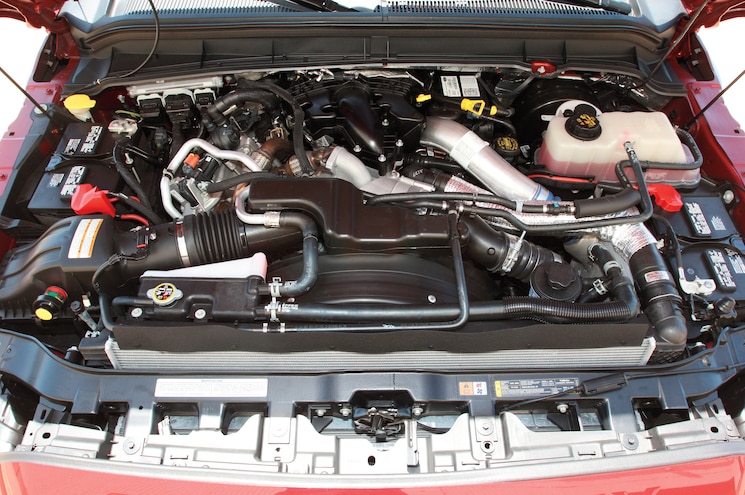 View Photo Gallery | 12 Photos
Photo 10/12   |   At the heart of the 2015 Ford F-350 is a second-generation 6.7L Power Stroke diesel engine. A class-leading 440 hp and 860 lb-ft of torque are churned out thanks in part to an all-new Garrett turbocharger and improved fueling system. 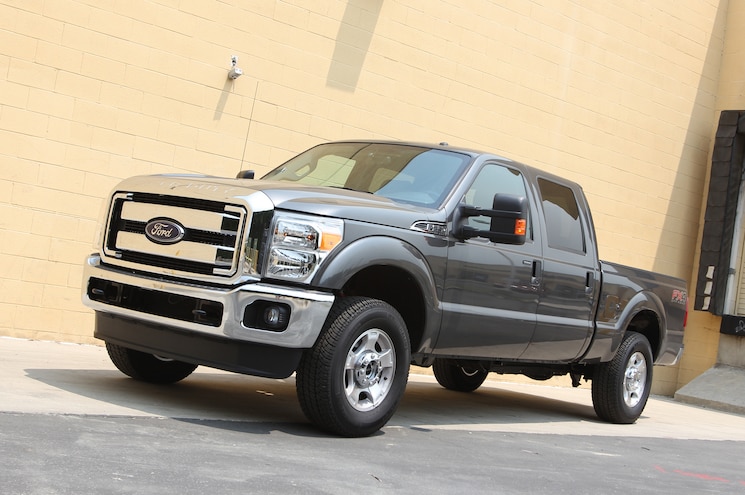 View Photo Gallery | 12 Photos
Photo 11/12   |   2015 Ford F 250 Super Duty Front
The Power Stroke diesel engine isn’t the only powertrain available in ’15 Super Duty trucks. For those looking to forgo the $8,000-plus option price of the oil-burner, there is the standard-issue 6.2L gasoline-powered V-8. This engine is no slouch, churning out 385 horsepower and 405 lb-ft of torque. Jumping between the diesel and gasoline mills, it’s noticeable that there is a power difference. However, if all that you drove was the gasoline-powered pickup, it wouldn’t leave you wanting.
Where the 6.2L shines is in the fleet application, where you’re hauling light loads or towing small trailers. The landscaping industry comes to mind first. It also makes a great choice for recreational use when toys being hauled are more than a ½-ton can handle but not quite into diesel territory. Going this route you will sacrifice fuel economy, to the tune of 2-3 mpg unloaded and nearly double that when loaded down. But at the end of the day, the $8,000 savings by not taking the diesel option will sure buy a lot of gasoline. 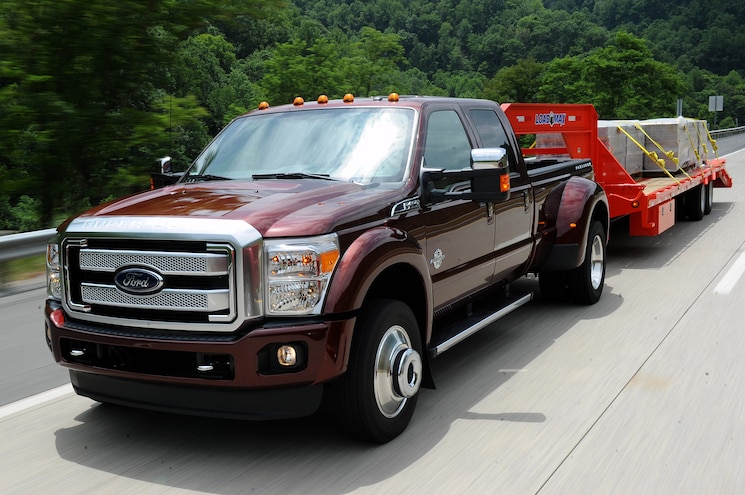 View Photo Gallery | 12 Photos
Photo 12/12   |   2015 Ford F 450 Super Duty Platinum Front Three Quarter 05
Towing with the F-450
When it comes to towing, the F-450 has its sights set on the crown. While the F-350 boasts a higher payload capacity, the F-450 comes in with a rated towing capacity of 31,200 pounds. That’s 1,190 pounds more than Ram 3500’s best and 8,000 pounds higher than GM’s.
Overall, the truck does what it claims to do. It tows a lot of weight and does it with relative ease. In our short time behind the wheel, the Ford out-accelerated both of the competitors, and the truck’s new exhaust brake did an excellent job keeping speeds in check on the downhill. Ford recognized the shortcomings of the previous generation and managed to improve upon all of them. The bar has certainly been raised.