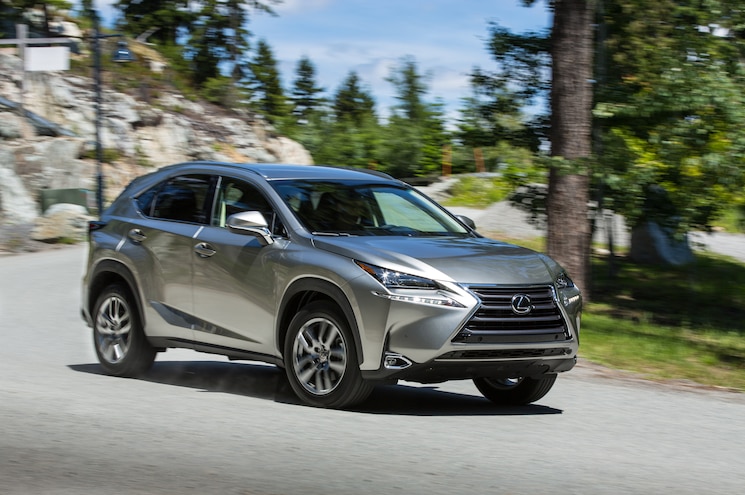 I'm up in Whistler, Canada, and driving with a Lexus representative through one of the many villages that make up the upscale Whistler Blackcomb enclave, frequently noted as the top skiing and snowboarding resort in North America. With stunning vistas and high peaks that retain their snow caps year-round, it’s no surprise this region has become a four-season playground.
As we serpentine through a number of trendy retail locales, I suddenly realize that we’re being gawked at and pointed out by small clutches of young adults; they are clearly enamored by the 2015 Lexus NX we're motoring. The F-Sport’s Ultrasonic Blue Mica paint is a definite attractor, and then there’s the ginormous black spindle grille and LED running lights, but it’s likely the uber-cool compact utility styling package has also caught the eye of the fit and active Millennials and Gen Xers that live and play here. That’s exactly what Lexus was focusing on with this all-new SUV that comes in turbo and hybrid models. Designed and engineered by a team with racing in their blood, Lexus set its sights on the entry-lux crossover market with young and active city dwellers in its cross hairs when pulling the trigger on the NX. 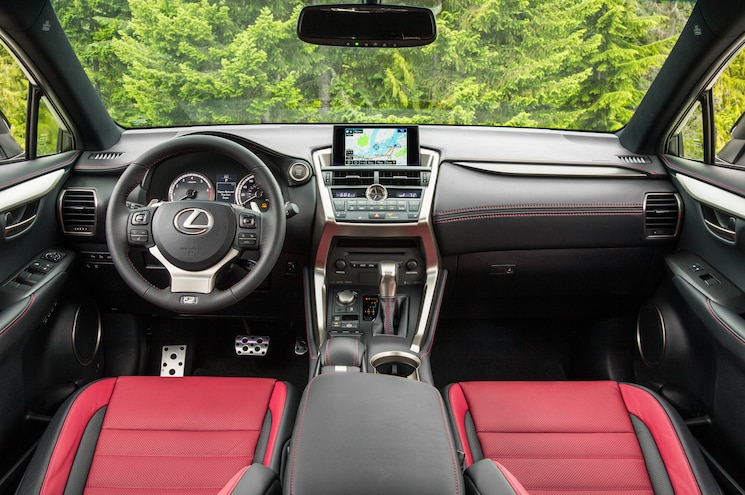 View Photo Gallery | 45 Photos
Photo 2/45   |   The NX’s cabin is clearly inspired by some of Lexus’ more recent youth-oriented models like the IS sedan and CT hybrid.
The beauty of the NX is its efficient, svelte package, calculated to “transport you to high adventure” -- You and three others, along with your premium sports gear, that is. “It’s the next wave of luxury inspired by passion,” explained Takeaki Kato, chief engineer of this new model that was engineered and designed not only to be safe, smart, and eco-friendly but also to tap into the market for “coolness” by imbuing it with unusual and distinct features and demeanors that Lexus hopes will stand out in the global compact SUV sea of sameness. Kato, a racing enthusiast and owner of the admired 1992 MR2 Spyder sports car, wanted the NX to be “not normal -- but 200tgets Lexus’ first-ever turbocharged gasoline engine, with an available unique.” The NX F-Sport performance package that boosts its looks and liveliness. The NX 300h hybrid is Lexus’ sixth hybrid offering. Both come in front- or all-wheel-drive versions. The 200t is pushed through the gears by a new six-speed automatic transmission, while the 300h receives constantly variable transmission.
From the front, the NX appears to be crouching, with a grille growl that has an almost menacing look. Softening that attitude is Lexus’ gem-like L-finesse LED lighting in both the front and back. The fascia wears sexy eyebrow lines that add curb appeal to the NX’s game face. The angular body has been sculpted as if from a single chunk of metal, with its peak toward the back of the roof. The CUV’s athletic, muscular stance is punctuated by wide, slanting C-pillars that speak to the breadth of internal stowage that has been crafted to swallow four golf bags longitudinally across the cargo bay. Door handles are trimmed with an LED light stream that illuminates the handle, while the side mirrors are detailed with a metal garnish that reduces sunlight reflection. The nucleus of the rear is the raked tailgate with an inte-grated spoiler. Back haunches are trimmed by Lexus’ signature L-shape light clusters, with seamless LEDs and an outer lens that gives the impression of crystal. The tailgate repeats the spindle-grille scheme on a smaller scale. The underbelly’s six aero panels and a roof-mounted spoiler are a nod to racing technology and help smooth the NX in the air currents, aiding fuel economy. A novel range of 17 - and 18 -inch alloy wheels gives a nod to exotic sports cars rather than SUVs. The more menacing-looking F-Sport is distinguished by special badging, a more aggressive grille and front lower bumper, special wheels, black outside mirrors, exclusive interior trim, and front sport seats 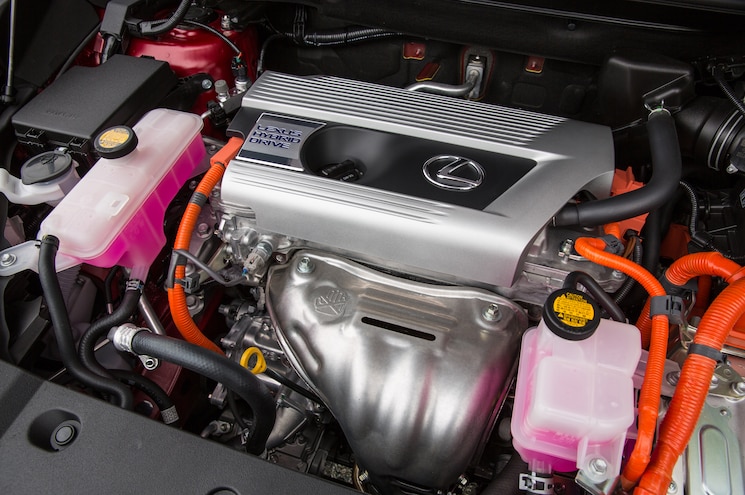 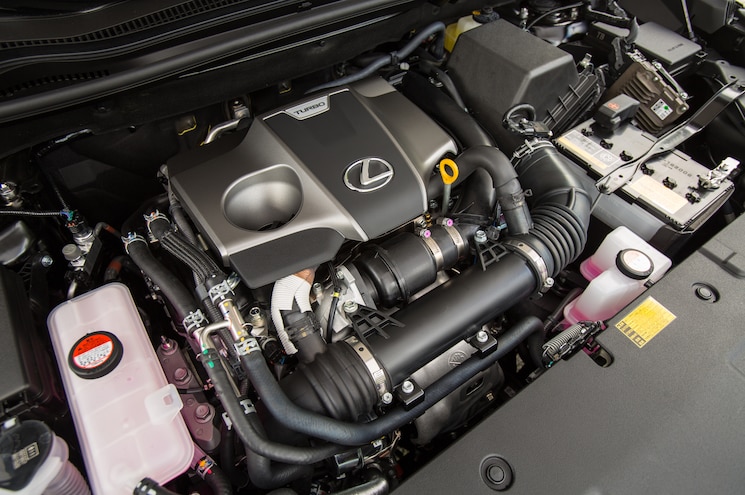 View Photo Gallery | 45 Photos
Photo 13/45   |   Stuffed under the hood of the NX200t is a 2.0L, turbocharged, 4-cylinder engine. Helping to build an impressive 235hp and 258 lb-ft of torque is a twin-scroll turbocharger that produces 17psi of boost at full-tilt.
In both models, a pre-loaded front differential controls torque (and yaw rate feedback control on AWD versions) to give optimum grip, control, and agility on traction-reduced surfaces and helps provide straight-line stability at high speeds. Fuel economy is rated at 22 mpg city and 28 mpg highway for FWD and 21 mpg city and 28 mpg highway AWD, with a 0-60mph time of 7.2 seconds for FWD; slightly slower for the AWD and the hybrid.
Front suspension is MacPherson struts, and while a newly designed trailing arm double wishbone sits under the back, it separates the coil springs and dampers to aid in handling and making a lower floor. Steering is crisp from an electronic power steering system, while disc brakes at all corners are set up with all the newest of brake technologies, including traction control, start/stop, and hill-start assist.
The NX 200t pleases with plenty of power and no turbo lag. In addition, the hybrid has more than enough power to move quickly and, although quiet inside, has a vehicle proximity notification speaker that alerts pedestrians and cyclists as it approaches. All versions are set up to smooth corners, bumps, and dips on the road, and all feature safety features that aid in handling unpredictable situations. 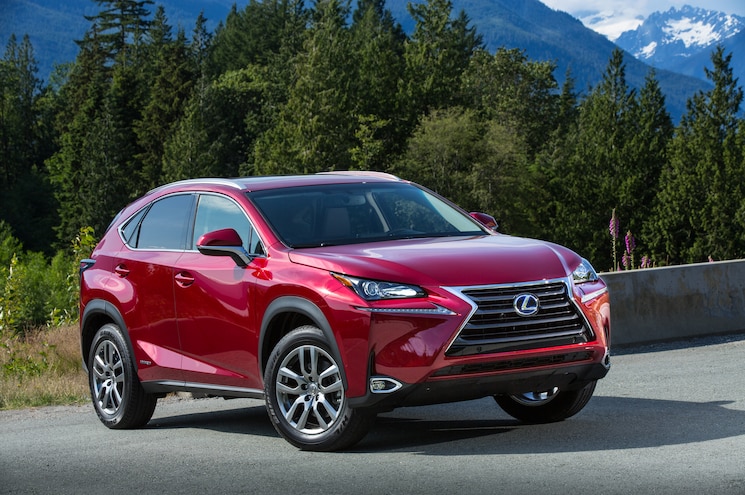 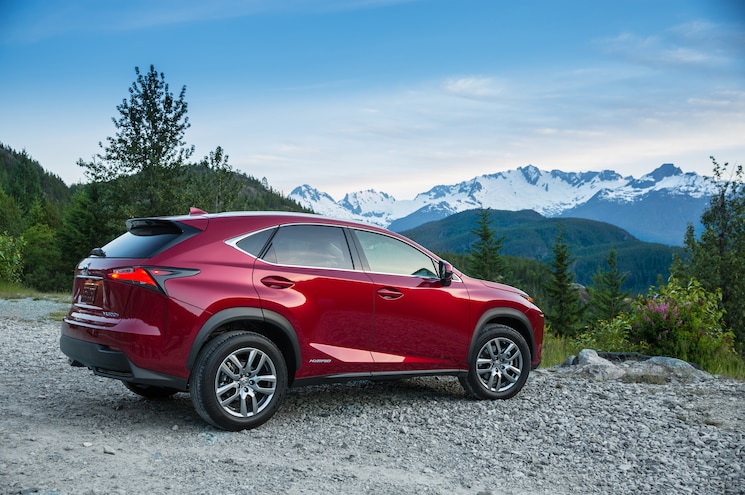