The C-Class that thinks it's an S-Class 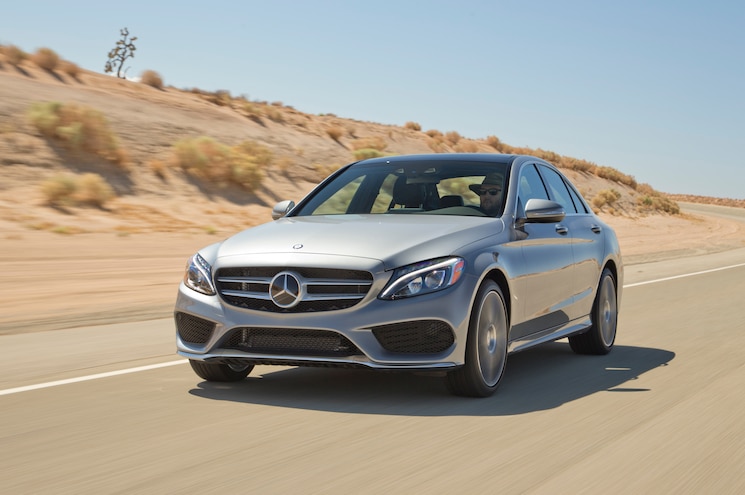 It's been more than 30 years since the world breathlessly welcomed the Mercedes-Benz 190E, the first "baby" Benz and the ancestor of today's C-Class range. Developed in an era when engineers absolutely ruled the roost at Daimler, the 190E featured a complex multi-link rear suspension and a high-tech windshield wiper with a cam-driven blade to ensure maximum screen coverage, and the car was built like a tank. For all that, though, the 190E was clearly an entry-level car, sparsely equipped with vinyl seats, lots of hard plastic interior parts, and a stick shift as standard equipment. The 2015 Mercedes-Benz C300, by contrast, thinks it's an S-Class.
Today's entry ticket into Mercedes-Benz world is the CLA sedan. The CLA's lower-cost front-drive platform, shared with the European A-Class and B-Class hatches, and the GLA SUV allow Mercedes to offer an appropriately come-hither base price. Mercedes-Benz USA will sell more than 25,000 CLAs this year, and current sales patterns suggest more than 75 percent of buyers will be new to the three-pointed star. The CLA gives permission to move the C-Class upmarket.
The Mercedes-Benz C-Class is a 2015 Motor Trend Car of the Year contender - find out soon whether it has what it takes to win. 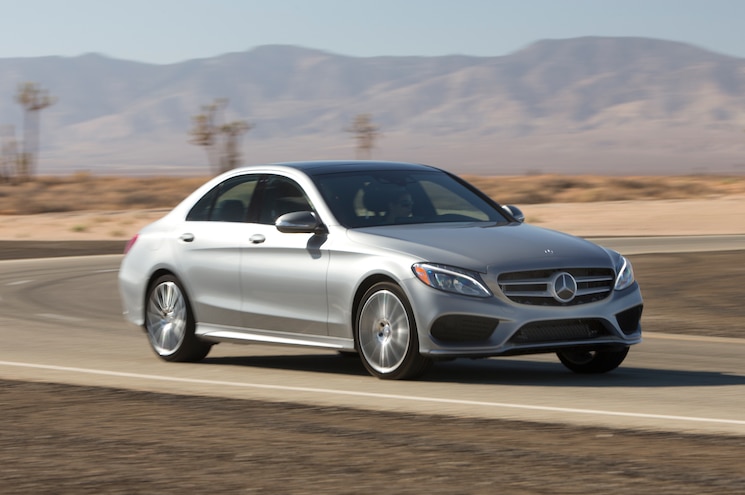 View Photo Gallery | 83 Photos
Photo 2/83   |   2015 Mercedes Benz C300 4Matic Front Three Quarter In Motion
And that's exactly what Daimler has done. You'll need to spend just over $40,000 for a base four-cylinder C300, the cheaper of the two C-Class models currently available in the U.S. And "base" is the operative word -- this is a $40,000 car in which sat-nav and leather seats cost extra. Our Palladium Silver tester, fitted with the above options plus a Sport Package that included bigger wheels and tires, stiffer suspension, and cross-drilled front discs; a Driver Assistance Package with adaptive cruise control and lane keeping assist; and a Burmester premium audio system, carried a sticker of -- deep breath -- $55,995. Ker-ching!
At first blush, the 2015 C300 carries its price tag well. Longer and wider overall than the car it replaces, it looks reassuringly expensive and more obviously upscale than either BMW's 3 Series or Audi's A4. The redesigned sheetmetal, from the prominent grille to the sculpted body sides to the softly rounded rear end, clearly channels the imperious new S-Class.
So does the beautifully executed interior. Even in base form it's awash with softly polished metal and sumptuous forms. Spend the money for the leather interior package ($2,300, which also gives you multi-adjustable vented seats and ambient lighting) and your choice of polished or open-pore wood trim ($325), and the new C-Class cabin absolutely nails the baby S-Class meme: BMW 3 Series interiors look positively Spartan by comparison, and word out of Ingolstadt is panicked Audi managers have delayed the launch of the next-generation A4 by 18 months while designers rework that car's interior. 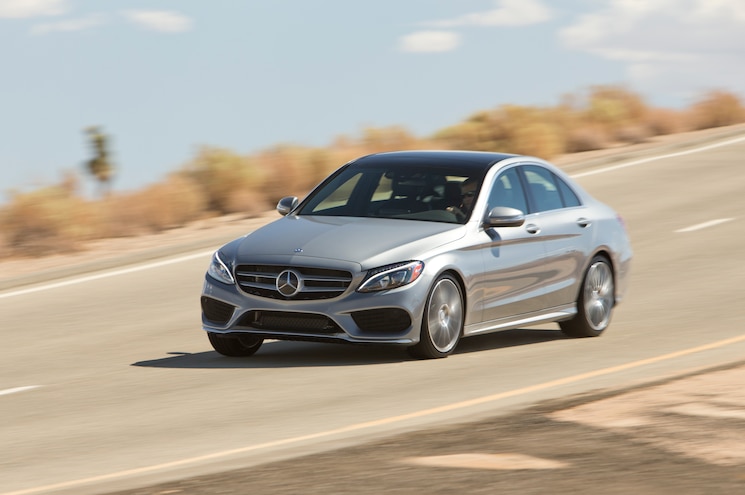 View Photo Gallery | 83 Photos
Photo 12/83   |   2015 Mercedes Benz C300 4Matic Front Three Quarter In Motion 03
Rear seat passengers are likely to be the only ones disappointed in the interior of the new C-Class. Despite a wheelbase 1.6 inches longer than a mid-'80s W124 E-Class sedan, rear seat legroom, though better than the outgoing model's, feels surprisingly tight. Blame those extravagant proportions because about two-thirds of the 3.1-inch wheelbase increase over the previous C-Class has gone to pushing the front wheels away from the cabin.
The 2015 C-Class' optics might be upsized, but the powertrains are downsized. The C300 is powered by Daimler's 2.0-liter turbocharged inline-four. (The C400 has a 3.0-liter twin-turbo V-6 under the hood, while the forthcoming C63 AMG forgoes the charismatic, naturally aspirated 6.2-liter V-8 that powered the previous model for a new 4.0-liter V-8 enhanced with a couple of turbos.) The C300's four-banger develops 241 hp at 5,550 rpm and an impressive 273 lb-ft of torque from 1,300 to 4,000 rpm with commendable levels of smoothness and refinement.
That wall of torque helps mask the slightly sluggish responses of the seven-speed automatic transmission and, along with the 4Matic all-wheel-drive system that is standard on all U.S.-spec 2015 C-Class models (for now -- 2WD versions are coming next year), enabled the C300 to accelerate to 60 mph in 6.4 seconds and record a quarter-mile time of 14.8 seconds at 93.4 mph. That puts the C300 midway between a BMW 320i and the surprisingly quick Cadillac ATS 2.0T in terms of straight-line performance. The MT figure-eight test took 26.3 seconds, which is just two-tenths of a second off the V-6-powered C350 Sport we tested in 2013. 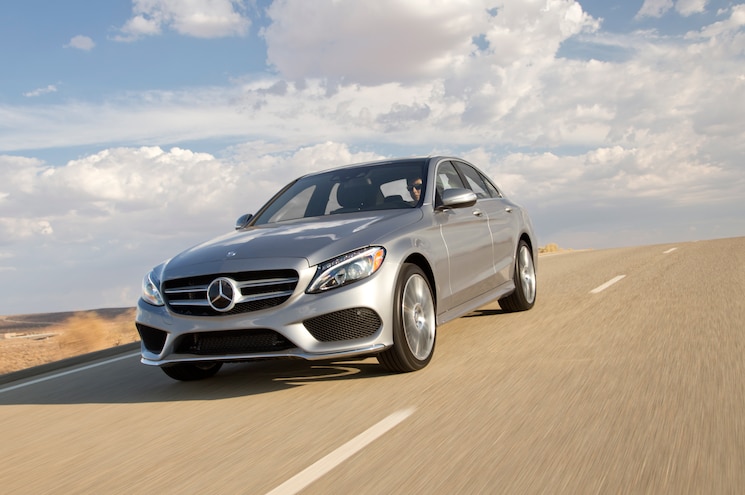 View Photo Gallery | 83 Photos
Photo 13/83   |   2015 Mercedes Benz C300 4Matic Front Three Quarter In Motion 02
The C300 might look like a luxury car, but our tester didn't ride like one. Fitted with the optional 19-inch wheels and low-profile performance tires (17-inch alloys and all-season rubber are standard), it felt brittle and jittery on less-than-perfect road surfaces. Five different drive settings can be accessed using the Agility Select switch on the console: Eco, Comfort, Sport, Sport+, and Individual, each offering different settings for transmission shift points, steering effort, and throttle response. (On cars fitted with the optional AirMatic suspension, it also allows a choice of three different suspension settings.) Selecting Sport or Sport+ modes sharpened up turn-in response on our conventionally sprung car thanks to the new rear-axle torque-vectoring system, but the chassis would always default to mild, benign mid-corner understeer when pressed harder.
The C-Class accounted for about a quarter of Mercedes-Benz's U.S. sales last year, so the decision to push the 2015 model upmarket with more equipment and technology, a more lavishly finished interior, plus, of course, a higher price tag represents a significant strategic shift for the company. It's a strategic shift with little risk, however. With the CLA covering its back, this C-Class will be a home run. It's not perfect -- there should be more legroom in the rear, and avoid the sporty wheels and tires if you value a decent ride -- but it clearly positions Mercedes-Benz as a luxury and technology leader in a segment where everyone else -- Audi, Jaguar, Cadillac, Lexus, Infiniti -- is desperately trying to build a better BMW 3 Series instead. 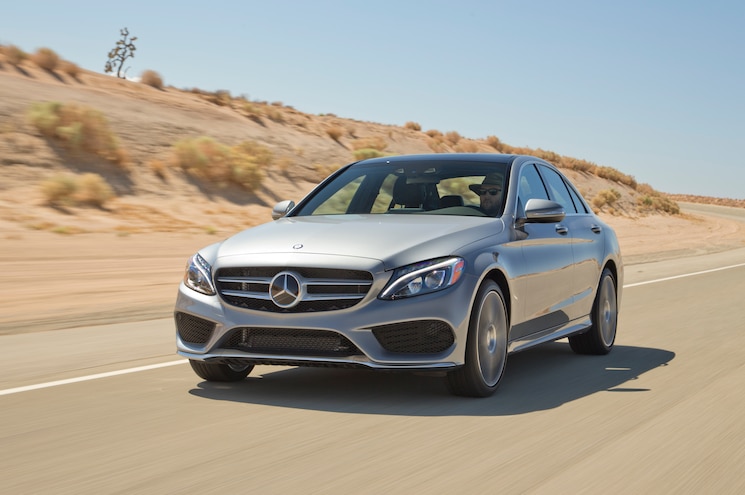 - OF
By Angus MacKenzie
190 Articles