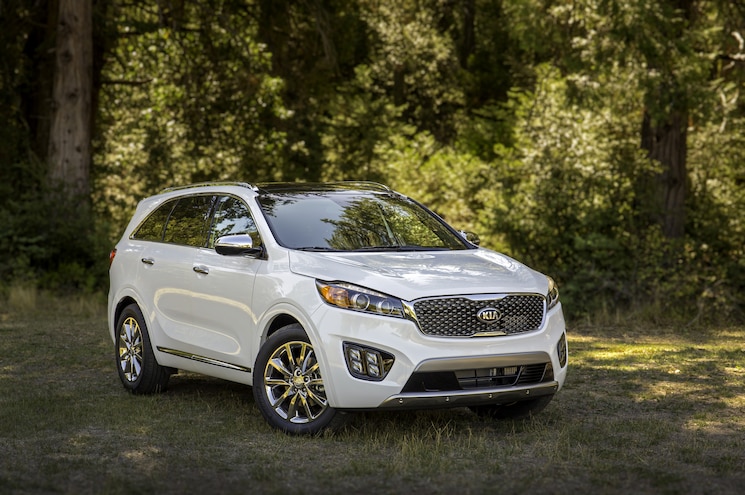 Even when Kia was just beginning to shed its bargain-basement image, the first-generation Sorento stood out as one of its more stylish offerings and has maintained its image of being a smartly styled, value-packed midsize SUV. The last significant redesign was slightly puzzling to us as significant engineering resources were put into a vehicle that, at a distance, was nearly indistinguishable from its predecessor, as well as being no larger, despite offering (nominally) three rows of seating. With the 2016 Kia Sorento, any of the perceived shortcomings of the last model are addressed with a larger, roomier, more stylish, yet instantly recognizable package that is sure to appeal to repeat Sorento buyers, as well as those new to the brand.
The new Sorento’s body consists of as much as 53 percent high-strength steel, a 115 percent increase over the outgoing model, resulting in a 14 percent increase in torsional rigidity. Being a family oriented vehicle, obviously safety is a big selling point, and the Sorento comes standard with anti-lock brakes, stability control, traction control, brake assist, and hill start assist. Forward collision warning, smart cruise control, blind spot detection, rear cross-traffic alert, and surround-view are optional.
Power of Choice
The 2015 Sorento offered buyers the choice of a base 2.4L naturally aspirated I-4 or a 3.3L V-6, both with gasoline direct injection. For 2016, buyers can also spec a 2.0L turbocharged I-4 producing 240 hp, splitting the difference between the 185 hp base engine and the 290 hp V-6. All are mated to a mandatory six-speed automatic. As before, front-wheel drive is standard, with all-wheel drive optional. The two four-cylinder models are offered with seating for five, with V-6 models getting seven-passenger capacity.
Although the wheelbase has been stretched 3.1 inches over last year’s model, it’s still shorter than that of the Hyundai Santa Fe, which is 0.8 inches longer. Also unlike Hyundai’s two-model strategy, both the five and seven-passenger version each share the same wheelbase and other key dimensions.
Kia has long been known for packing a lot of goodies into its models for a lower price than the competition. While we don’t yet know the official price of the 2016 Sorento, we can vouch that it has plenty of goodies to select from the options list. Heated and ventilated front seats and heated rear seats are available, as well as 14-way power driver and eight-way power passenger seats and an optional 12-speaker, 630-watt sound system. An additional feature for the Sorento’s premium audio system is Clari-Fi technology, which scans compressed audio files and intelligently removes any distortions or artifacts.
Naturally, technology plays a major part in the comfort and convenience feature story, and Kia’s UVO eServices deliver a cornucopia of features, including Geo-fencing, speed and curfew alert (for when teens are behind the wheel), and plenty of supported apps, including iHeart Radio, Pandora, and Yelp. The UVO system also supports Apple’s Siri Eyes-Free system, as well as Google Local Search.
The 2016 Sorento goes on sale in the first quarter of 2015. Pricing and fuel economy will be announced closer to the on-sale date.