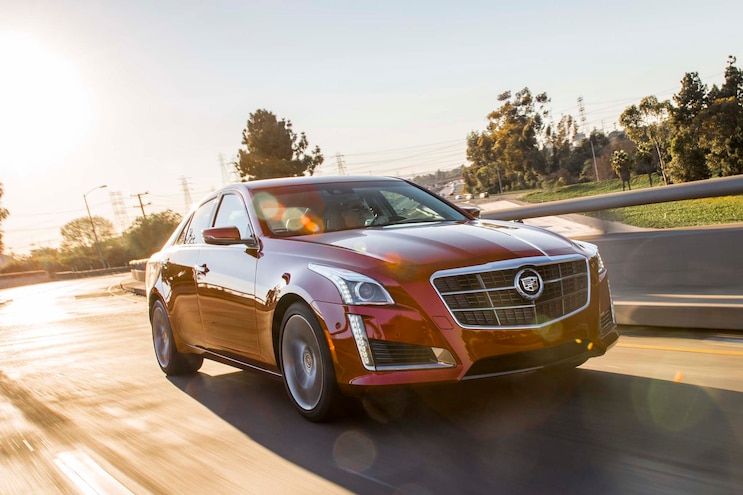 I always try to devote at least one long-term vehicle update to the information and entertainment system (infotainment in industry speak) because they've become so integral to operating the vehicle. More than that, frustrating infotainment systems have led to poor "quality" scores for new vehicles even if the system has no mechanical problems. When it comes to Cadillac's CUE (Cadillac User Experience) system, commenting on it is unavoidable.
I've defended CUE from the start as a great idea poorly executed and not nearly as bad as some of my peers have made it out to be. I won't stand here and apologize for it or claim it's free from error, because it has its problems. It's simply not the "Office Space" printer of infotainment systems some suggest.
When someone complains about CUE, they're usually complaining about the touch-sensitive control panel below the screen, not the screen itself. The black panel with brushed metal-looking accents and backlit icons looks sleek, but its functionality drives people crazy. There are two problems with it: People aren't sure where to touch, and when they do, they don't know how to touch it properly. 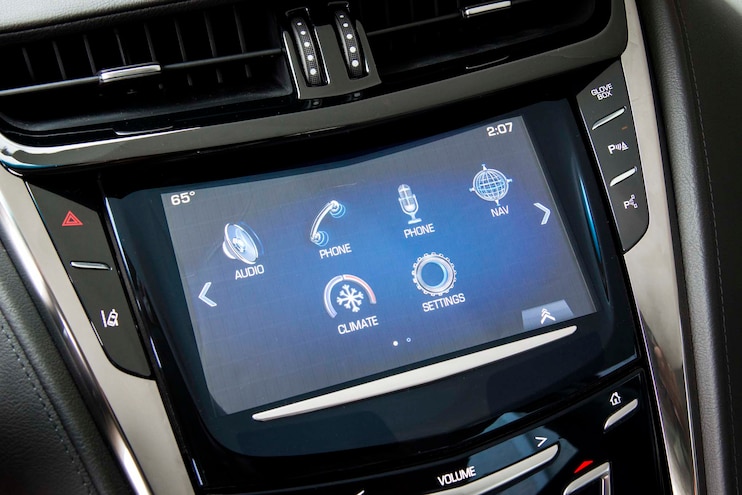 View Photo Gallery | 16 Photos
Photo 2/16   |   2014 Cadillac CTS Vsport Home Screen
The first problem is related to the metallic accents. They're meant to be guides, and you're supposed to touch the black panel just above the accents. Invariably, though, people touch the accents and are frustrated when nothing happens. Any competent Cadillac salesman can talk a new owner through this before it becomes a problem, but any time a friend, relative, coworker, etc., gets in the car, they're likely going to do the intuitive thing and touch the accents. Decades of raised, physical buttons have taught us to touch the part that sticks up, and the only ways I can see to avoid this confusion are to make the accents themselves touch-sensitive or get rid of them.
The second problem is that people touch CUE the way they touch their smartphones, tablets, or the touchscreen on the top of the dash. We're used to touching screens that react instantly to the slightest tap or brush of the finger. CUE doesn't work that way. To get its attention, you touch it like you touch the buttons on your microwave, with a slightly firmer press and a very slight delay before taking your hand away. If you tap it like you're texting on your phone, it probably won't register. You've got to slow down.
Although it's easy to attribute this problem to bad hardware, it's actually a programming issue. See, CUE's engineers were stuck between a rock and a hard place. Make the panel too sensitive, and every accidental brush of the panel could trigger unwanted changes. Imagine reaching for the volume and accidentally changing the temperature and the fan speed because more than one finger touched the panel. Make the panel too resistant, though, and you get frustrated users who feel like the system doesn't respond. CUE's engineers clearly erred on the side of caution, and it's driving people crazy.
The good news for owners and prospective buyers is that once you know how and where to touch it, CUE works fine. I can climb in the Vsport and immediately adjust all my controls without issue now that I'm comfortable with the system. But then, I work with infotainment systems every day, and I've met plenty of non-technophiles who don't; they find even the best infotainment systems maddeningly difficult to use. CUE's problem is its learning curve is steeper than most, even if it works well after (if) you get over that hurdle. 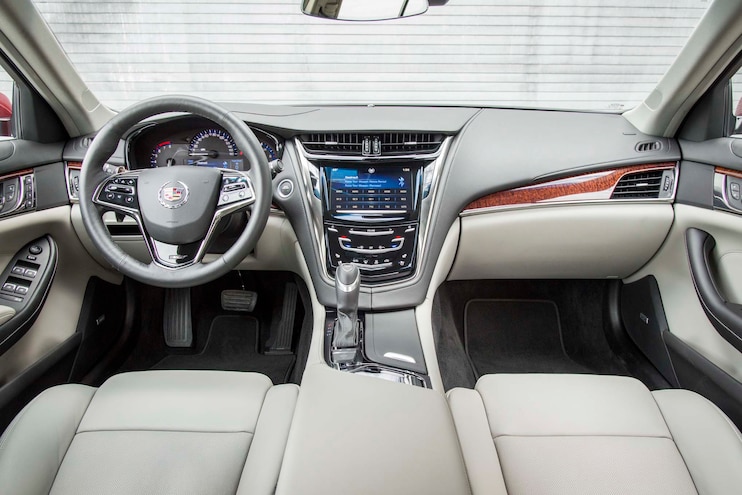 View Photo Gallery | 16 Photos
Photo 3/16   |   2014 Cadillac CTS Vsport Interior
As for the rest of the system, there isn't a whole lot to complain about. The biggest annoyance is the shifting Exit/Back button that not only changes names but also moves from one upper corner of the screen to the other depending which menu you're in. Pick a spot and stick with it. Otherwise, the menus can be a bit layered but are generally good.
On the positive side, I like CUE's strategy of de-cluttering the screen when you're not touching it. Proximity sensors just below the screen know whether your hand is near or not, and when you're not reaching for it, many of the buttons on the screen fade away to give you a better view of the map or whatever screen you're on. Bring your hand near, and your presets pop up on the bottom of the screen and the customizable direct access buttons (radio, navigation, climate control, phone, etc.) reappear at the top of the screen. The screen itself, less likely to be accidentally touched, is much more responsive to a light touch and does exactly what you want it to.
CUE also features a voice-control system activated by a steering wheel button, and it's got its own plusses and minuses. On the plus side, it generally understands conversational speaking and gets your command right. On the minus side, the delay between when the system beeps to acknowledge your command and it actually does something feels excruciatingly long. (It's a matter of seconds, but when you're used to Siri or Cortana, it feels like forever.) It's slower than just about any other voice-command system I've used, which is really frustrating when all you want to do is change the radio station without taking your hands off the wheel.
(This isn't specific to CUE, but rather to all voice control systems in cars, but I feel like I should use this opportunity to mention that Point of Interest searches don't work like Google or Siri. If you're not asking for something very generic and reasonably close by, the system isn't going to find it, and it will drive you crazy. Pull over and do it through the screen, which will have much more detailed results, or use your smartphone.) 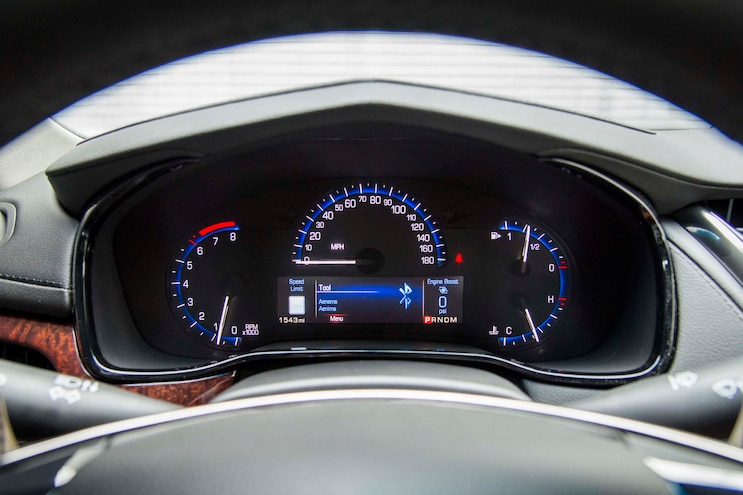 View Photo Gallery | 16 Photos
Photo 4/16   |   2014 Cadillac CTS Vsport Instrument Cluster
Being an all-encompassing moniker, CUE also covers the display in the instrument cluster. If you sprang for the full digital cluster, you'll have lots of displays and menus to play with. In our case, we've got the ugly base gauges with the little strip of a display screen at the bottom. It's divided into three columns, with narrower columns on the ends and a wider column in the center. The center has only four options: radio, navigation, phone, or settings. The two side columns are customizable and can each show more than a dozen scrollable information screens. (You can deselect screens you don't want in the list from the settings menu.) Scrolling through the screens is easily done with the rocker switch on the steering wheel. I prefer to keep a digital speedometer on the right and estimated fuel range on the left, but I'll scroll to other screens as needed.
On the whole, Cadillac's CUE system works pretty well if you know how to use it and are willing to be a little patient with it. If you want an iPhone in your dash, you're going to find it frustrating, and if you don't like touch-sensitive controls at all, you're really going to find reason to hate it. If you're willing to work with it, you'll find CUE fairly average in terms of user-friendliness when compared to systems from the rest of the industry. There are far worse infotainment systems on the market, and there are far better ones, as well. CUE has the bones to be a better system, and I hope Cadillac's programmers will work through these problems in future iterations.
More on our long-term 2014 Cadillac CTS Vsport: