The Original Premium Minivan is Showing Its Age 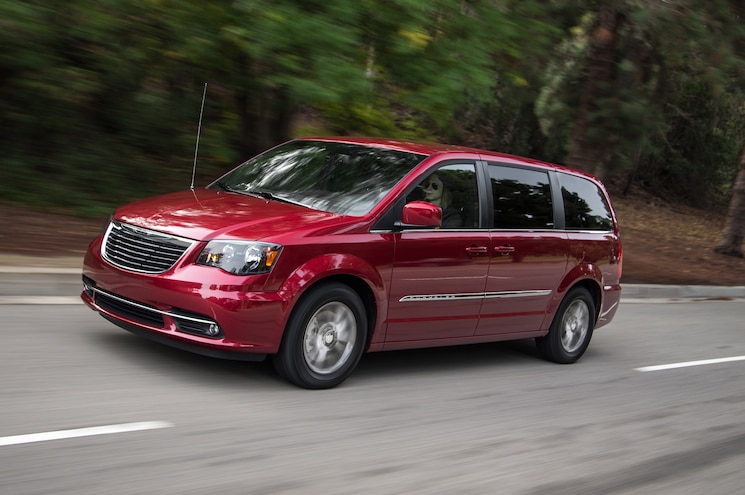 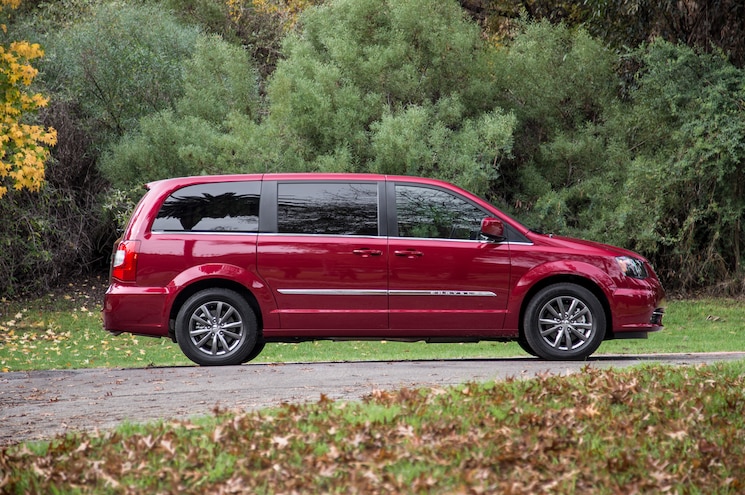 View Photo Gallery | 39 Photos
Photo 2/39   |   2014 Chrysler Town And Country Side Profile
Options include a $1,945 SafetyTec Package (automatic high beam control, blind-spot and cross-path detection, ParkSense rear park assist, rain-sensing wipers, tire pressure monitoring display), $100 second- and third-row window shades, and $995 Uconnect infotainment system with Garmin-based navigation system and SiriusXM satellite radio. With a base price of $33,990 (including $995 destination), our tester came to $37,030.
All Chrysler Town & Country models are powered by the automaker's 3.6-liter Pentastar V-6 rated 283 hp and 262 lb-ft of torque. Power is sent to the front wheels via a six-speed automatic transmission. Fuel economy is EPA-rated at 17/25/20 mpg city/highway/combined. The S model has stiffer suspension than other Town & Country models. In our testing, the Town & Country S took 7.8 seconds to reach 60 mph; the quarter mile arrives in 16.1 seconds at 86.4 mph. The S model lapped the figure eight in 28.5 seconds at 0.60g average and went around the skidpad in 0.76g average. It took 126 feet for the Town & Country to stop from 60 mph.
Although those numbers are consistent with many of its competitors, the 3.6-liter Pentastar and six-speed auto combination seem crude by comparison. The engine feels aggressive, but there is a noticeable (air intake?) whistle or (transmission?) whine as you pull away from a stop. "The accelerator seems spongy, and you really have to throw it all the way down to get it to wake up," noted Chris Clonts, Motor Trend digital director. Despite these criticisms, the Town & Country can peel out from a stop in the dry or wet; wheel hop and torque steer included. Around town, the handling feels confident, though the stiff suspension gives it a firm and bumpy ride, especially over rough pavement. Despite its light steering, the Town & Country S offers good initial turn-in response and tracks straight down the road. There is a notable amount of road and wind noise even at low speeds. 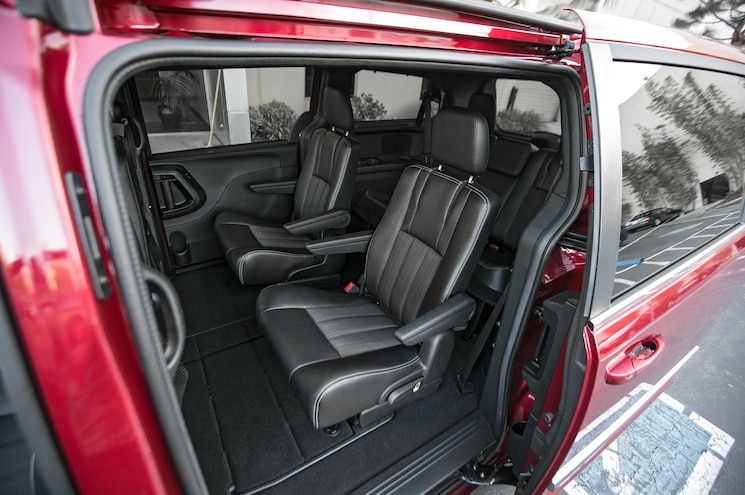 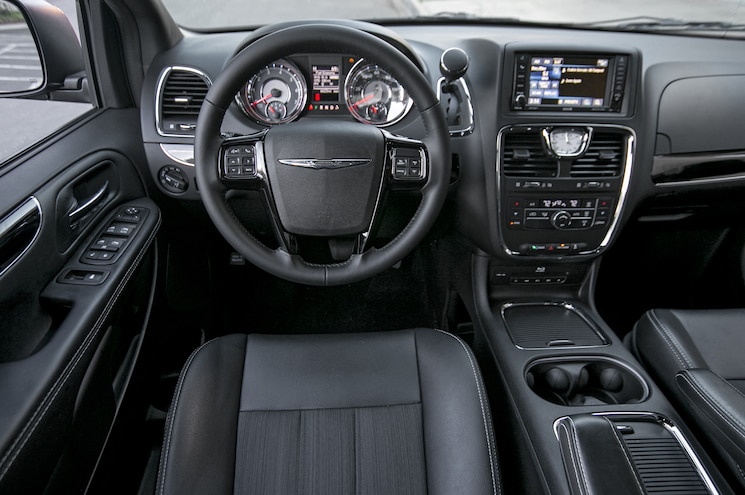 View Photo Gallery | 39 Photos
Photo 13/39   |   2014 Chrysler Town And Country Cockpit
The exterior's dark-trimmed theme carries over inside with the black leather seats with cloth inserts and gray stitching that carries over to the door armrests. The black leather-wrapped steering wheel features piano black trim on the spokes, as does the dashboard. Black is also used for the headliner, upper consoles, and center console. Another "S" logo is located in the instrument cluster. Although the dark interior initially gives the interior upscale feel, the cabin is filled with hard plastic, with the seats and door panels the exception. The gear shifter doesn't feel quite as premium as the leather-wrapped steering wheel. Some liked the high mount position of the gear shifter, which didn't block any of the infotainment or climate controls, but other (taller) drivers didn't like how it was "right there in your face." The Town & Country's second- and third-row Stow 'n Go seats and third-row tailgate seats were universally praised.
Chrysler's latest Uconnect infotainment system with an 8.4-inch touchscreen is one of the best systems in the business. Unfortunately, the Town & Country is only available with a dated Uconnect system with a 6.5-inch touchscreen and a Garmin-based navigation system.
The USB and auxiliary inputs are located on the head unit rather than the center console, which means there are iPhone/iPod cord(s) hanging down from the top of the center stack. The Bluetooth phone system paired easily, but the voice-activated connection process and the voice announcing who is calling (also displayed on nav screen) and when the phone call ended, both futuristic touches at one time, make the experience seem dated. The Bluetooth audio system failed to work, as did the voice-to-text feature for sending SMS/iMessages. Continually showing cross streets and speed limit info are welcome navigation features, but having vehicle speed displayed where passengers can see? Not so much. 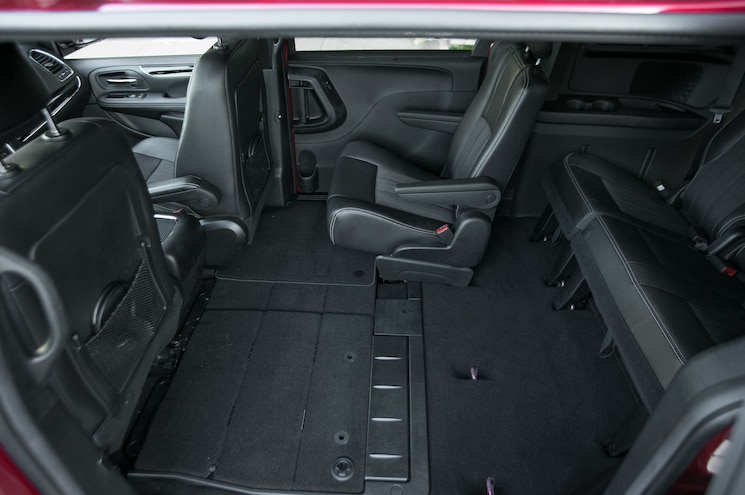 View Photo Gallery | 39 Photos
Photo 14/39   |   2014 Chrysler Town And Country Rear Interior
Additionally, the dual 12-volt outlets (one was key-on, the other always on) on the front of the center console were finicky, and the contact points didn't stay connected to my iPhone's car charger. Although the 12-volt outlets were less than successful charging my iPhone, the USB port can charge devices, albeit at a painfully slow rate. On the safety front, the Town & Country gets a four-star overall rating (out of five stars) from the NHTSA, but it's not considered a Top Safety Pick by the IIHS due to a poor rating in the small overlap front test. It did, however, receive a good rating in the moderate front overlap, side impact, and roof strength tests; good is the highest score.
In our Real MPG testing, the Town & Country more or less hit its EPA rating of 17/25/20 mpg city/highway/combined. The Chrysler minivan returned 16.9/24.9/19.8 mpg in our Real MPG tests in regular mode. Surprisingly, the city and combined numbers in regular mode were slightly higher than when tested in Eco mode. In Eco mode the Town & Country achieved 16.4/25.3/19.5 mpg.
As configured, our tester has a projected five-year cost of ownership of $44,692, which accounts for purchase price, state fees, depreciation, financing, insurance, fuel, maintenance, and repair costs. The Chrysler Town & Country S offers lots of content for the price -- if you can overlook its flaws and less than stellar safety rating. 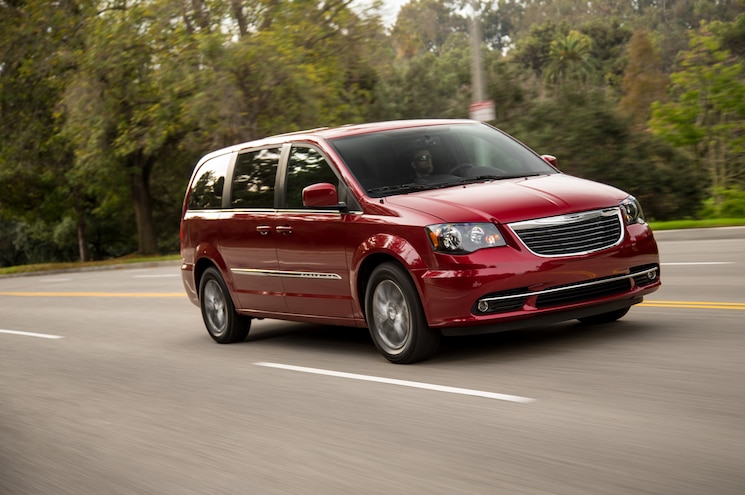