Witness the Efficiency and Reliability 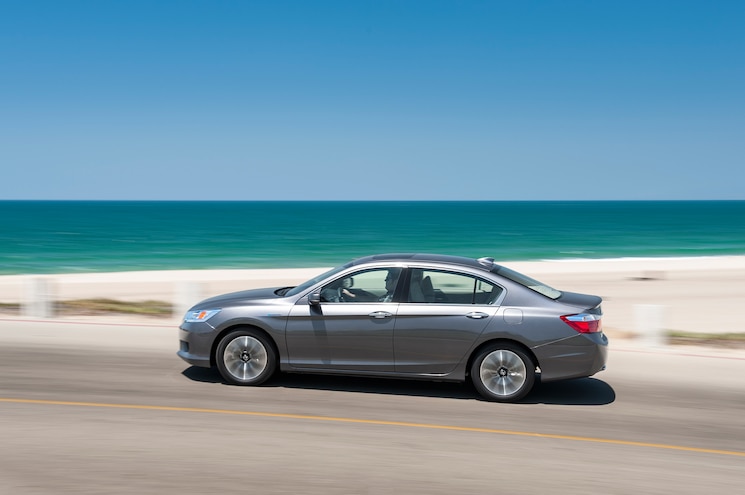 First order of business, the long-term Honda Accord Hybrid has been trundling along famously. Apart from the early hiccups noted in Update 1 with a loose strut mount bolt (now tightened) and a mystery noise in the steering wheel/column (a faint creak that's not always there), the car has demonstrated its reliability. With every push of the start button, there has been no extraneous drama.
After 20,000 miles, the stock Michelin Energy Saver A/S tread has been cut down from 9.5/32 of an inch to 6/32, yet the tire noise echoing into the cabin hasn't intensified greatly (not to my ears, anyway). The wear may be more advanced than the typical Accord Hybrid owner would experience. I seldom accelerate and brake hard, but I do corner enthusiastically -- though maybe not as enthusiastically as the guy in the Viper who spun out into the weeds near my place the other day.
If I were forced to protest something? The tan interior demands more frequent wipe-downs, particularly on the doors and center armrests. And the missus doesn't think the dual-zone climate control adequately warms her side of the chambers compared with other vehicles we've traveled in -- her beach girl upbringing clashes with my temperate taste to create at least a 15-degree difference on the climate control display (occasionally more). View Photo Gallery | 11 Photos
Photo 2/11   |   With less trunk space than the boilerplate Accord (contracted as much as 3.5 cubic feet due to the lithium-ion battery), the Hybrid is ill-suited for Costco runs. If only the Brawny Man still had his authoritative mustache.
That said, the Accord Hybrid is a remarkably effective collection of hardware and software. It's very efficient, and I'm not just talking about miles per gallon. Its 7.0-second 0-60 mph time is 0.6-second quicker than the average of four Accord I-4/CVT sedans we've tested despite the Hybrid weighing 231 pounds more and possessing 19-23 less peak hp. (The Sport model has the 4 extra ponies.) Praise be to the electric motor's power-delivery promptness. The car has an official 196-hp total system power rating, but that's the amount produced by the 2.0-liter engine and two-motor hybrid setup that allows the drive motor to send 166 hp to the front wheels (before transmission losses). It stops 7 feet sooner from 60 mph than the Accord normies. All while achieving a realistic 47/42/44 Real MPG city/highway/combined.
No Accord Hybrid update would be complete without a batch of new information from our fuel-economy partner Emissions Analytics. This round's request: How far can the car go before the engine fires up? EA carried out this experiment so you can be confident the test was impartial and not going downhill the whole distance at 3 a.m. to blow through stop signs and traffic lights with overinflated tires and with a pantsless driver (saves weight) at the wheel. Plus, their test results tell precisely how far they made it to the thousandth of a mile (or every 5.28 feet) and show the battery's state of charge second by second. And the answer computes to 1.487 miles expending the full battery range at an 18.5-mph average. (Curiously, A/C use had no noticeable impact.) Come to think of it, we should investigate again when the tires are closer to 2/32 of an inch.
More on our long-term 2014 Honda Accord Hybrid Touring: