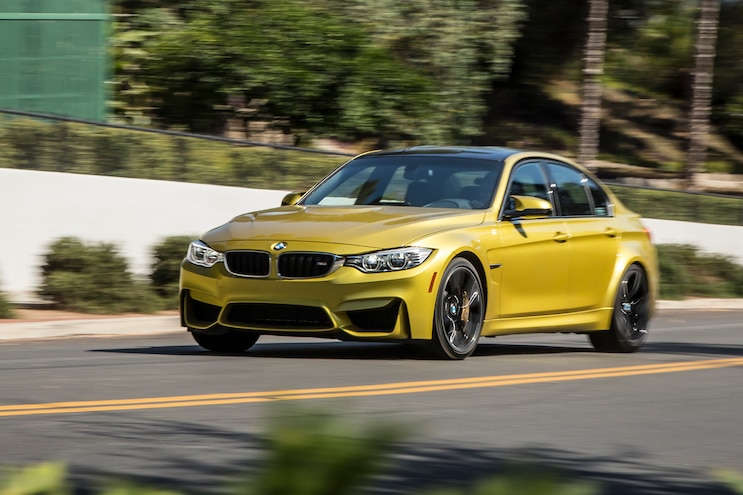 The two most popular questions I receive about our long-term BMW M3 are "What is that color called?" and "How do you like it?"
The first is easy to answer: Austin Yellow, produced by BASF and in line with BMW's habit of naming paint colors after cities that have famous racetracks. This one honors the Circuit of the Americas in Austin, Texas.
The second question is harder to answer. There are many things I like about the M3, but since I'm a bad-news-first kind of guy, let's talk about what has been driving me nuts: The car creaks, and has since I first took possession of it. It's an arthritic creak, a cross between insomnia on an old wooden bed frame and the slow crushing of individual Saltines. I hear it mostly over steep speed bumps and driveways, and it comes and goes.
BMW USA reps were indignant at first, which isn't surprising, as creaking suggests chassis flex, but then they suggested the rubber door seals be thoroughly cleaned and lightly coated with silicone grease. This would imply dust in the door seals is causing the noise, which stands to reason -- as fall has set in, I've noticed I don't hear it as much in the morning (when things are still a bit damp), but then it's often back by midday. It's just shy of maddening and will be left for the dealer to figure out at the first service. 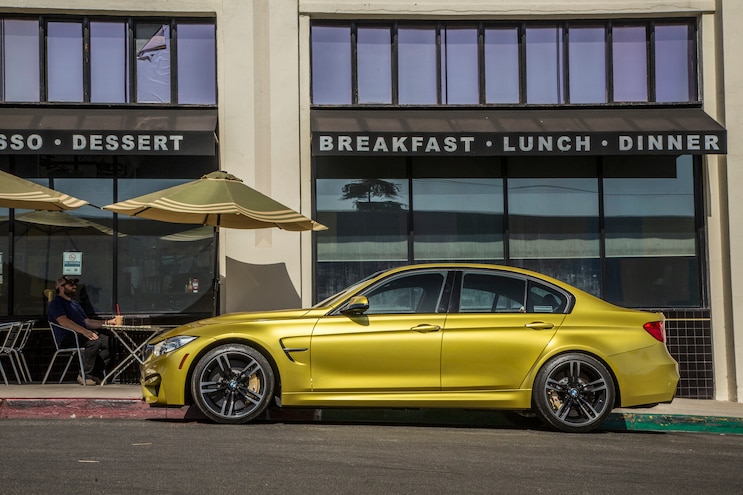 View Photo Gallery | 18 Photos
Photo 2/18   |   2015 BMW M3 Side Profile
The seven-speed dual clutch is another source of irritation. I love the performance at wide open throttle; shifts are quick and quiet, like snapping fingers in velvet gloves. In Sport Plus mode there's a wicked rev-matched zing with every downshift. When cold or at low speed, there isn't the same, consistent buttery smooth engagement or roll out of a traditional automatic transmission, but so far I can live with that.
Parking has been driving me a bit crazy. The M3's DCT has what looks to be a sporty manual shift knob but is actually a pivoting lever for the drive-by-wire transmission. It doesn't physically engage any gears, so there are no detents for PRNDL; from the straight up position, you toggle once to the right for drive, again to set it in sequential mode. For manual gear changes, a forward toggle downshifts, back upshifts, and gears can also be immediately selected with paddles positioned around the steering wheel. For neutral, toggle once to left. The gear lever always returns to the center position, except when pushed left and forward for reverse.
Anything missing? Ah yes, park. Here is where it gets tricky. There is no dedicated park button or lever position. To park the car, you leave it in drive, neutral, or reverse, put your foot on the brake, and push the ignition/off button. Once you do this, the gear indicator in the instrument panel will flash to P before fading as the car goes into accessory mode, politely leaving the audio system on and the power windows operational. To fully shut down the car, you either hit the ignition button again with your foot off the brake (at which time everything goes off) or exit the vehicle and hit lock on the key fob. Theoretically, this is a handy feature for people like me who enjoy listening to the radio as they grab their bags, coffee, iPhone, etc. upon exiting the vehicle. 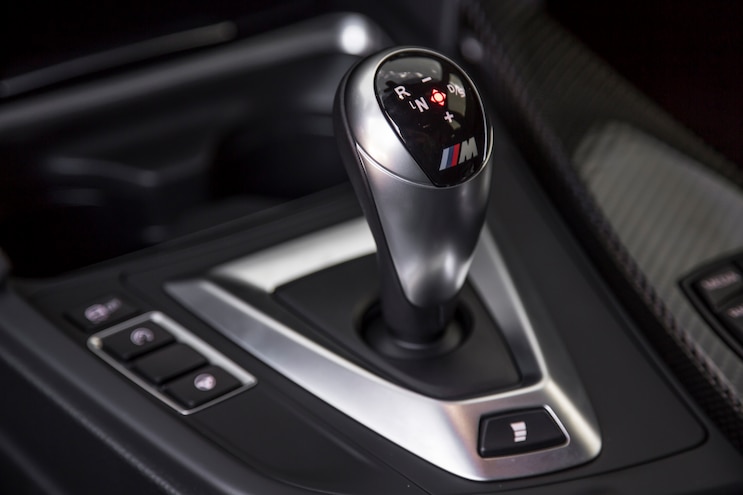 View Photo Gallery | 18 Photos
Photo 3/18   |   2015 BMW M3 .gear Knobjpg
Annoyance 1: Your foot must be on the brake when you initially shut down (go to accessory mode), even if you set the parking brake. The car will let you shut down the engine in D, N, or R, but if you don't have your foot on the brake, the transmission goes to neutral, not park. You can then exit the vehicle, but it honks loudly if you try to lock it and move on with your day. To rectify the situation, the vehicle must be set to park, which for me usually means putting down my phone/sunglasses/bag of In-N-Out, climbing back in, and hitting the ignition button again (without touching the brake pedal -- otherwise I'd start the car again).
Annoyance 2: As mentioned previously, the car is not equipped with a backup camera, parking radar, or even side mirrors that drop to show the curb when you hit reverse. I favor backing into parking spots, especially at work, and I often open the driver's side just before shutting down to check that I'm straight between the lines. But if I do this with my seatbelt off and foot off the brake, the car automatically pops into neutral, and the parking irritation begins again. Sure, this automatic neutral selection occurs with an audio chime and visual warning in the instrument cluster, but I'm often blasting Childish Gambino or shutting down the vehicle too quickly to notice.
For such blazing-fast vehicle, these are maddening pitlane penalties.
To be fair, let me repeat that the fastest/simplest way to shut down the car is to simply hit the ignition switch twice, with your feet of the brakes. No matter what gear you're in (D, R, or N) the transmission will go to neutral on the first ignition push, then to park on the second. If it sounds complicated, it is because it is. It's taken me a long time to instinctively double-tap at shutdown (I do love NPR in the mornings, aka "Driveway Moments") and visually check the gauge cluster for the magic P. I just don't see what is so hard about letting me shut the car down like I would in a regular stick shift -- in neutral with the parking brake set.
Next update, things I like about the M3.
More on our long-term 2015 BMW M3 here: