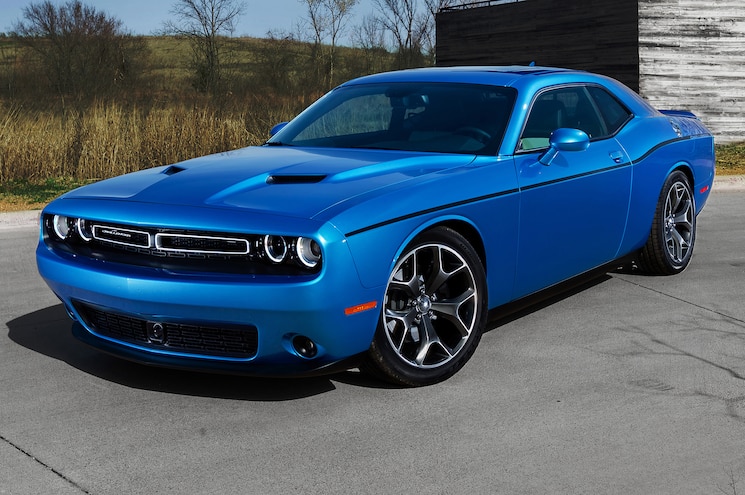 When you have something like the Dodge Challenger SRT Hellcat spewing out a mind-boggling 707 hp, you wonder who's going to care about the mild-mannered 2015 Challenger SXT Plus. The answer is lots of people, actually. While the Hellcat will most definitely coax people into the showroom, the SXT Plus will be the Challenger most drive away with. As much as they'll want the 6.4-liter supercharged Hemi V-8, they won't want everything else that comes with it, including the higher price tag, higher maintenance costs, and, of course, the higher insurance costs. So for those who want the go-fast looks without all that other stuff, the Challenger SXT Plus is the next-best thing.
For starters, it doesn't look soft compared to its more muscular siblings. Even with the weaker engine, the SXT Plus doesn't let its guard down with the aggressive-looking 1971-style split grille and furrowed eyebrows. While bright surrounds in the front grille hint there's a V-6 hiding underneath the hood (V-8 Challengers get black surrounds), other styling elements such as the front splitter and fully functional hood vents suggest there's something beefier under there. Even the hood bulge is more prominent compared to its predecessor. While 20-inch wheels come standard at the SXT Plus level, opting for the $695 Super Track Pak paints them black, in addition to adding "performance-oriented" tires, suspension, brakes, and paddle shifters. All in all, for a V-6-powered car, this thing looks pretty tough from the outside, but inside, the Challenger SXT Plus is a big softie. 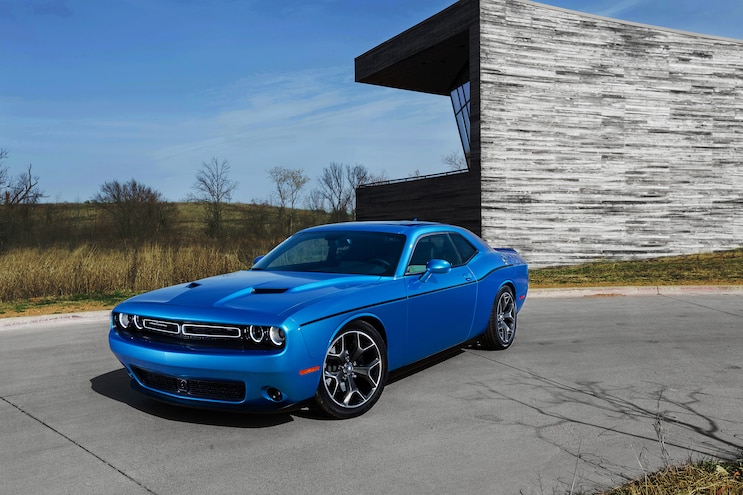 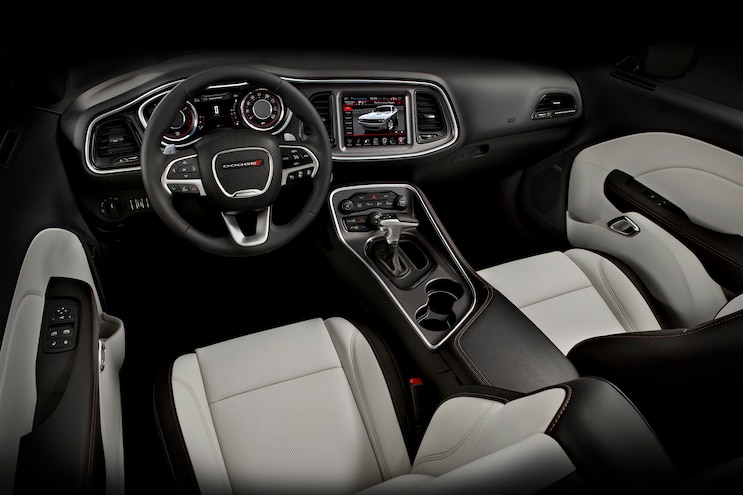 View Photo Gallery | 52 Photos
Photo 6/52   |   2015 Dodge Challenger SXT Interior
Step in to find a nicely updated cabin with high-quality materials the old Challenger lacked. There are more soft-touch points than you'd expect to find in a muscle car, with premium Nappa leather sport seats that you just melt into. A new steering wheel and the usual Chrysler switchgear further transform the cabin, and the center stack has been made even more driver-centric with an 8.1-inch touchscreen and Uconnect infotainment system that even a child could navigate. You'd be hard-pressed to believe you're driving a muscle car from behind the wheel, especially when you're taking advantage of amenities like the standard heated and ventilated front seats.
The only thing that really makes you feel like you're driving a ponycar rather than a luxury car is the Challenger's updated instrument panel, which harkens back to the 1971 car's gauges. While the rear section isn't ever the most comfortable place to be in a coupe, the back seats in the Challenger offer more legroom (37.1 inches) and headroom (33.1 inches) than the Ford Mustang and Chevrolet Camaro, making this muscle car more practical for everyday use. Heck, it would even make a great road-trip car, seeing as you can probably fit a ton of stuff into the gigantic trunk, which can swallow 16.2 cubic feet of stuff. Although the liftover height was a bit higher than I would've liked, the extra-wide opening made up for that. Blind spots are awful, so opting for the $795 Driver Convenience package would be a wise choice. It throws in blind-spot and rear cross-path detection systems along with the remote start system and HID headlights. 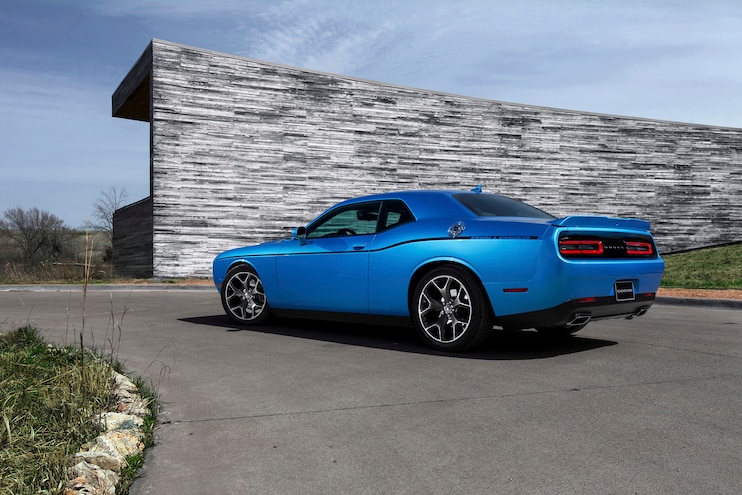 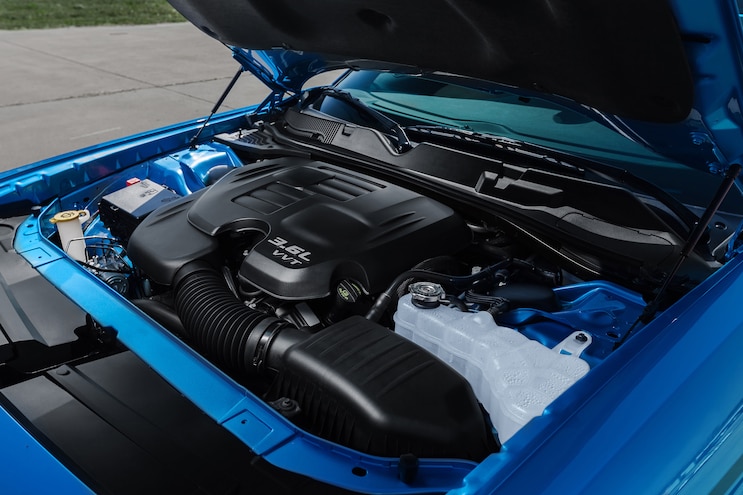 View Photo Gallery | 52 Photos
Photo 11/52   |   2015 Dodge Challenger SXT Engine
For people who don't necessarily want the Challenger for performance reasons and more so for the visual, the SXT Plus fits the bill. But that doesn't mean it lacks in the performance department. Equipped with the tried and true 3.6-liter V-6 Pentastar, the Challenger SXT Plus packs 305 hp and 268 lb-ft of torque. Although that might not sound like much next to the Hellcat, the numbers are comparable to the V-6-powered Camaro (323 hp) and the Mustang (305 hp). But the big news is that the archaic five-speed has been replaced by the eight-speed automatic. The switch-out bumps fuel economy up from 18/27 mpg city/highway to 19/30 mpg, but that's not even the best part. The new gearbox's smooth and seamless shifting makes the Challenger slightly faster.
Our tester went from 0-60 mph in 6 seconds flat, an improvement over the 2011 Challenger Rallye's 6.4-second run. In the quarter-mile, the Challenger whizzed through in 14.5 seconds with a trap speed of 96.9 mph; the Rallye did it in a slightly slower fashion in 14.8 seconds going 94.8 mph. It also performed much better in the figure-eight course with a 27.9-second run and 0.73g average versus the Rallye's 27.0 seconds and 0.62 g’s. It was during the figure-eight course that one editor pointed out that the Challenger SXT Plus seemed way too quiet, and it's true. When you see something like the Challenger hustle around a figure-eight, you'd expect to hear the V-8 roar. Alas, the SXT Plus completed the course much quieter than we anticipated. Off the track, the Challenger proved to be a smooth grand tourer, though its muscle-car roots really came out in corners. Although its performance suspension allowed it to remain rather stable, you can really feel the car's 3,900 pounds.
When viewing the entire Challenger lineup's performance numbers, the V-6-powered models might look like chopped liver. But when you consider all other things the SXT Plus has to offer — smoothness, comfort, sufficient fuel economy, and capability — it proves to be much tastier treat.

- OF
By Karla Sanchez
220 Articles