A Mid-Pack Performer in the Best Possible Way 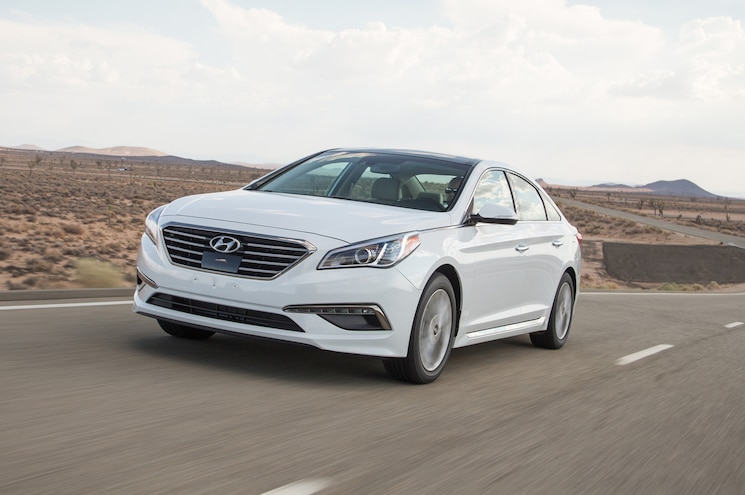 When even a mid-pack car such as the 2015 Hyundai Sonata is as good as it is, one thing's clear: It's a great time to be in the market for a midsize sedan. With an as-tested price of $32,510, our 2015 Sonata Limited 2.4 presented itself well, with a handful of features that are only available on engine-upgrade variants of competitors -- or not available at all. Once you get on the road, though, the competent 2015 Sonata 2.4 isn't a dynamically class-leading package, but at least it's not saddled with the expectations that come with the 245-hp 2.0T model's available Sport trim. Does the redesigned Hyundai Sonata have what it takes to continue climbing in sales toward the Ford Fusion and Nissan Altima?
Powered by a 2.4-liter I-4 that now makes 185 hp at 6,000 rpm and 178 lb-ft of torque at 4,000 rpm, the 2015 Hyundai Sonata, which has a six-speed automatic transmission, will serve most non-lead-footed drivers just fine, but push hard enough, and there are a couple flat spots in the powerband. We expect as much in the volume-oriented variant of a midsize sedan, but the car's 8.4-second 0-60 mph time would have been a mid-pack finish in our six-car Big Test comparison. (Track test numbers are taken from a Sonata Limited 2.4 at the 2015 Car of the Year competition.) That performance would have tied a 2014 Kia Optima and 2014 Chevrolet Malibu and come in slightly ahead of the 2015 Chrysler 200 (8.6 seconds) but behind the 2014 Honda Accord Sport (7.5 seconds, though non-Sports make 4 hp less), the 2014 Nissan Altima (7.9 seconds), and the 2014 Mazda6 (7.7 seconds). 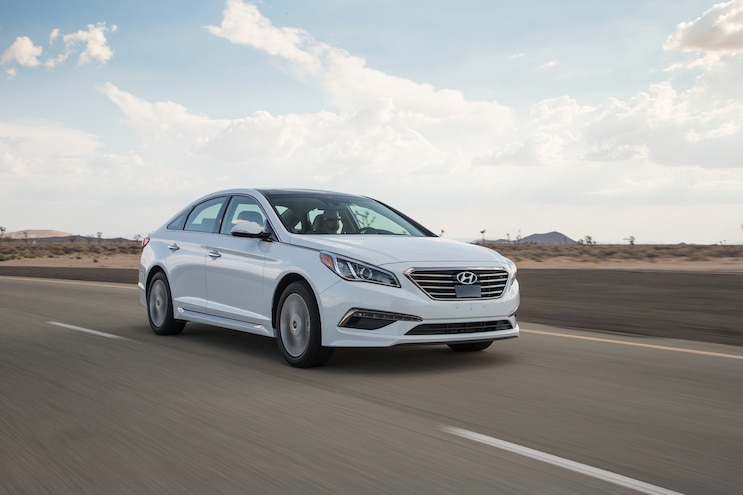 View Photo Gallery | 19 Photos
Photo 2/19   |   2015 Hyundai Sonata Limited Front Three Quarter In Motion
On the road, the 2015 Sonata's engine could be a bit quieter upon startup, and the throttle tip-in response is relaxed. Passing acceleration from 45-65 mph takes the Sonata 4.3 seconds, just slightly better than the Malibu, Optima, and 200 (at 4.4-4.5 seconds) but slower than the Mazda6, Altima (both 4.0 seconds), and the Accord Sport (3.7 seconds). The Sonata offers a Sport mode plus a manual gate for when you really want quicker responses from the transmission, even if it does auto-upshift for you. And as you'd expect, the sport mode adds heft to the steering while the eco mode loosens it -- the car will start in normal and eco modes but not sport.
So despite not being a driver's car like the 2014 comparison-test-winning Mazda6, the 2015 Sonata is competent at normal speeds in real-world driving. As Angus MacKenzie said at the 2015 Car of the Year competition where the Sonata was a contender and not a finalist, "Toyota and Honda should be very worried because at this rate of development, the next-gen Sonata is going to be a bona fide Camry and Accord killer." 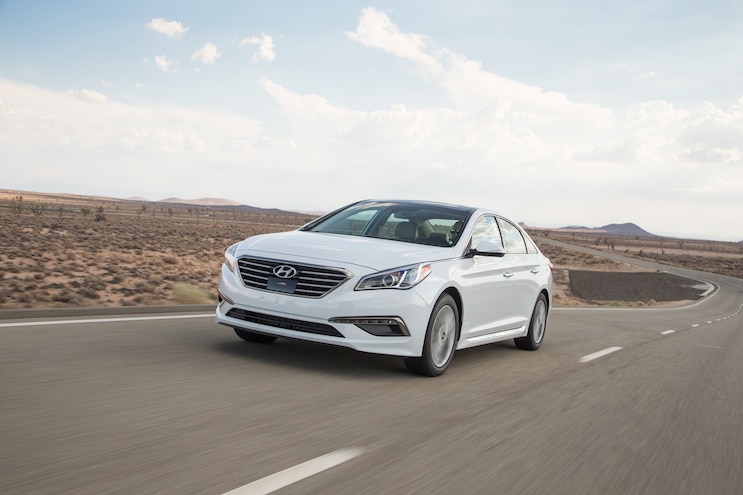 View Photo Gallery | 19 Photos
Photo 9/19   |   2015 Hyundai Sonata Limited Front Three Quarter In Motion 02
Where the 2015 Sonata continues to fight its way through the middle of a very competitive midsize-sedan field is fuel economy. The 2015 Sonata with the 2.4-liter engine most buyers will get earns as high as an EPA-rated 25/37 mpg city/highway, but that's only in base SE trim. Step up to the Sport or Limited 2.4 trims, and fuel economy drops to 24/35 mpg, below many in the segment. The same is true with the 2015 Sonata Limited 2.4's performance in the Motor Trend Real MPG test, which is designed to give buyers another idea of what real drivers can expect from their cars. With 21.1/32.2 Real MPG, the 2015 Sonata 2.4 falls below the 200, Optima, and Altima from that 2014 Big Test comparison of midsize sedans in city and highway mileage, though it's possible a Sonata SE, with its slightly better EPA ratings, would perform better in our instrumented Real MPG test. On the lower half of that Big Test comparison, the Mazda6 got 24/32 Real MPG, the Accord Sport 23/31 Real MPG, and the Malibu 19/31 Real MPG.
The 2015 Sonata Eco, with its seven-speed dual-clutch transmission and a turbocharged 1.6-liter I-4, offers impressive EPA-rated fuel economy of 28/38 mpg with 25.9/34.8 Real MPG and is actually quicker than the Sonata 2.0T. Still, when we drove the Eco model at 2015 Car of the Year testing, editors noted significant turbo lag and a transmission in need of a little more refinement. 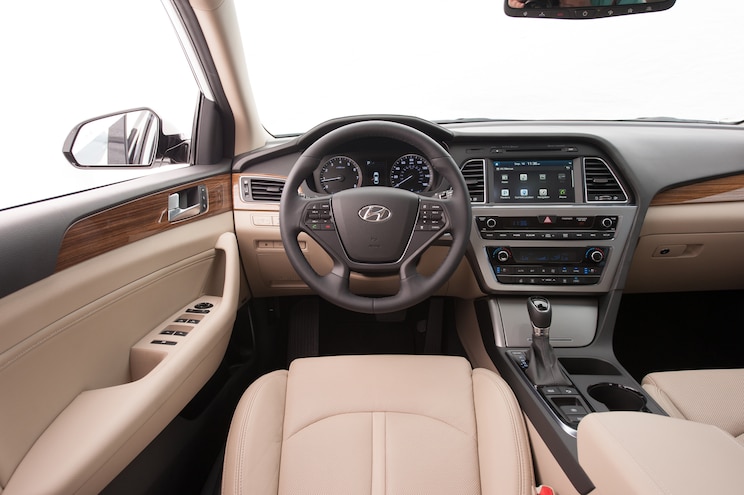 View Photo Gallery | 19 Photos
Photo 10/19   |   2015 Hyundai Sonata Limited Cockpit
The 2015 Sonata Limited 2.4 wins back some points with its interior. The center-stack layout is easy to use and looks good, plus the 8-inch touchscreen -- available on the Sport and Limited models -- really adds to the car's appeal, as do the clear, bright instrument-cluster gauges. Navigate through a couple menus on that 8-inch screen and you'll find a neat Driving Info display that shows how smoothly you're decelerating and accelerating in mph/sec, the speed distribution of your current trip, and even how much time you've spent idling. There's also lots of storage inside the Sonata, from a comfortably sized and covered storage area at the bottom of the center stack to a cubby that could function as a cell phone holder, and rear-seat legroom is impressive. If there's one area we'd like the 2016 or 2017 Sonata to update, it's the too-hard front-seat armrests. Spend some time feeling the armrests of a Nissan Altima or Subaru Legacy and you'll see how something so trivial can become a much-appreciated detail owners will notice all the time.
Hyundai and Kia have carved out a niche over the last few years by offering upscale features on higher-end trims. The same is true for the 2015 Sonata Limited -- our $32,510 tester included Limited-specific 17-inch alloy wheels, LED taillights, chrome-tipped dual exhaust outlets, heated and cooled front seats, heated rear seats, leather, manually operated rear side-window sunshades (a cool feature on a midsize sedan), hands-free keyless access, an electronic parking brake with a brake auto-hold feature, adaptive cruise control, a forward collision warning system, navigation on an 8-inch touchscreen, HID headlights, and a panoramic sunroof. Although it's true you can get many of these features on other loaded midsize sedans, the Toyota Camry, Honda Accord, and Nissan Altima make you pay for a V-6 engine to get HID or LED headlights.
The panoramic sunroof remains a great Hyundai and Kia option. Contrasting the black roof with silver or white paint adds to the Sonata's curb appeal despite the overdone LED daytime running lights, and having that much natural light inside the cabin is a great feature. What we could do without is the smart trunk -- when the car senses the key fob is within three feet of the trunk, it will open automatically. It makes sense on the Hyundai Genesis sedan, which has a power-operated trunk, but is mostly useless on the Sonata, which still requires you to lift the trunk lid all the way open -- something you'd have to do anyway without the feature.
When it comes to safety, the 2015 Hyundai Sonata has it covered with a five-star overall safety rating from the NHTSA (out of five stars) and a 2014 Top Safety Pick+ designation from the IIHS. Put the entire package together and you're left with a decent alternative to non-sporty variants of the Camry, Accord, Altima, and Fusion. Unless too many buyers become attached to the Hyundai's bright instrument cluster gauges, panoramic sunroof, or HID headlights on a base-engine model, though, it's tough to see the Sonata overtaking the Fusion and Altima in the sales race anytime soon. Still, the Limited 2.4 is a good option for when upscale options and rear-seat legroom are more important than class-leading efficiency or acceleration, and the car shows how good a mid-pack performance in this segment has become.