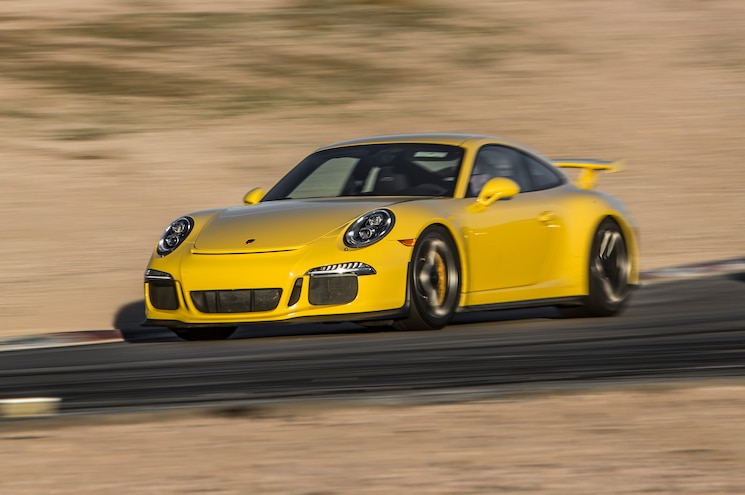 It’s often pointed out that today’s sports cars make more power than yesterday’s supercars, but in a world where Cadillacs make 640 hp, it’s worth saying again. In such crazy times, 475 hp doesn’t sound all that impressive comparatively, but as the saying goes, it’s not how much you’ve got; it’s how you use it. The 2015 Porsche 911 GT3 uses it extremely well.
There are plenty of empirical examples to support this. Take acceleration, for instance. In our possession, the GT3 hit 60 mph from a stop in just 3.1 seconds, which is 0.1 second faster than the also rear-wheel-drive 2015 Chevrolet Corvette Z06 we tested (with manual transmission), which does weigh 266 pounds more but produces 650 hp and 650 lb-ft. The GT3 goes on to lay down an 11.3-second elapsed time in the quarter mile at 122.9 mph, matching the Corvette’s E/T but 3.3 mph slower. Not bad for “only” 475 hp and 324 lb-ft. 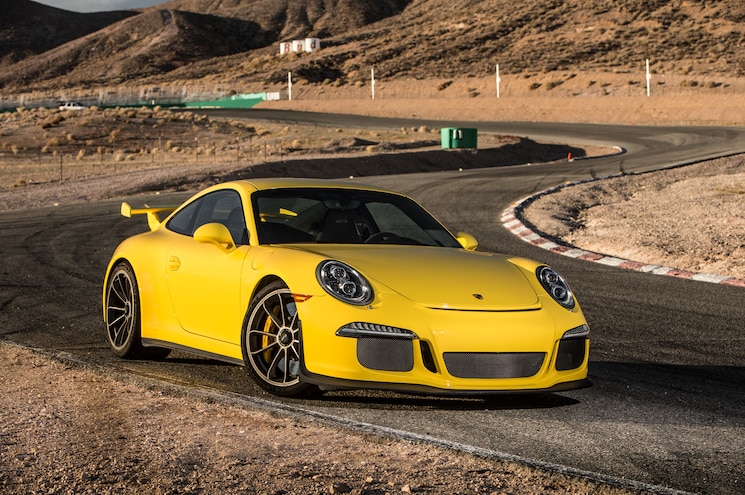 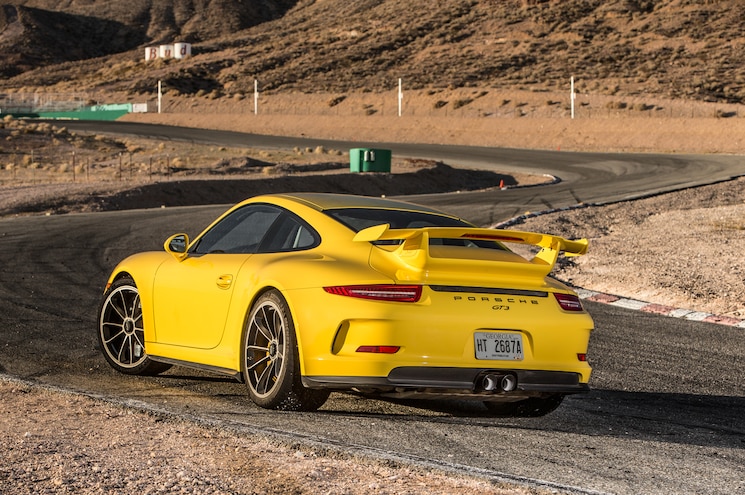 View Photo Gallery | 18 Photos
Photo 6/18   |   2015 Porsche 911 GT3 Rear Three Quarter
More than that, though, our testing team is convinced the GT3 still has more in it. Porsche’s launch control system is among the best on the market, but although it returns quicker results than any human we’ve put against it (partly because of how it’s designed), it’s inconsistent. The more times you run it, the faster it’ll get as the computer learns the surface you’re launching on. At some point, it’ll begin to plateau, and you’ll begin to fear for the lives of the clutches, but it always leaves the nagging doubt that it might just be a little bit faster. Some problem to have.
Of course, the GT3 isn’t about going fast in a straight line, no matter how good it may be at the task. That’s the 911 Turbo’s job. The GT3 is built for corners, and its performance there is even more astounding. On our skidpad, it pulled an eye-straining 1.11g average, the fourth-best performance we’ve ever recorded, tied with the Mercedes-Benz SLS Black Series and trailing the Porsche 918 Spyder, 2012 Corvette Z06, and 2015 Corvette Z06 (first). Out on our figure eight test, it slayed giants. Lapping in just 22.8 seconds at 0.96g average, it’s tied as the third-fastest car ever around our figure eight. Next to it on the podium is the 2012 Corvette Z06. Ahead of it are the 2015 Corvette Z06 and the 918 Spyder (first). The GT3 is far and away the least powerful of the group.
But wait, there’s more. As at the dragstrip, the GT3 feels like it’s got more in it on the skidpad, as well. Hoping for a balance between straight-line speed and cornering performance, Porsche delivered the car’s manually adjustable suspension and wing setup rather conservatively. As such, the GT3 had a tendency to lift-throttle oversteer on the figure eight, foot-wide Cup tires be damned. Although it was great fun to drift the car around, it was obvious that, tuned for more grip and less oversteer, the GT3 would be noticeably quicker around the track and likely perform even better on the skidpad. 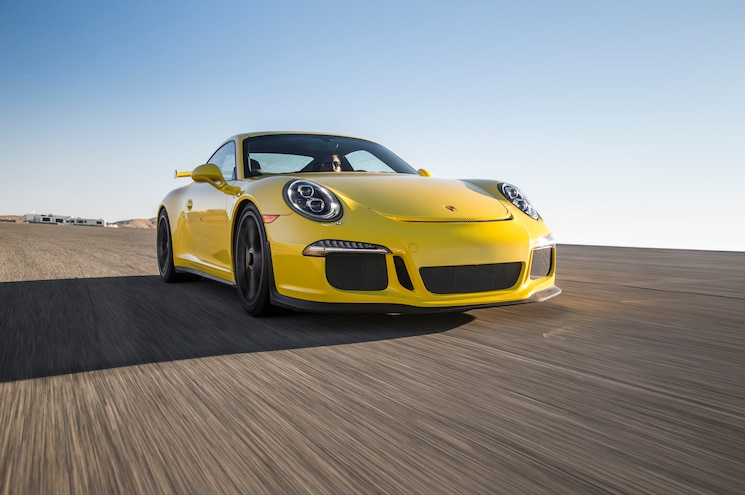 View Photo Gallery | 18 Photos
Photo 7/18   |   2015 Porsche 911 GT3 In Motion
The only data point on which the GT3 did not podium is 60-0 mph braking. At a scant 98 feet, though, it’s hardly something to complain about even if it isn’t the best we’ve ever tested (90 feet, 2014 Corvette Convertible). The GT3 is tied with the BMW M4, which is still good company.
Of course, our instrumented testing really just provides maximum numbers. To make sure the GT3 delivers where it’s supposed to — on the racetrack — we took it out to Willow Springs International Raceway, and not the tight little Streets of Willow track, but the big track. There it laid down a 1:27.28 lap time, which, per online resources, makes it the third-fastest street car on that track, behind the 918 Spyder and a Dodge Viper ACR (which strains the definition of “street legal”). But was it any fun? Ask Randy Pobst. 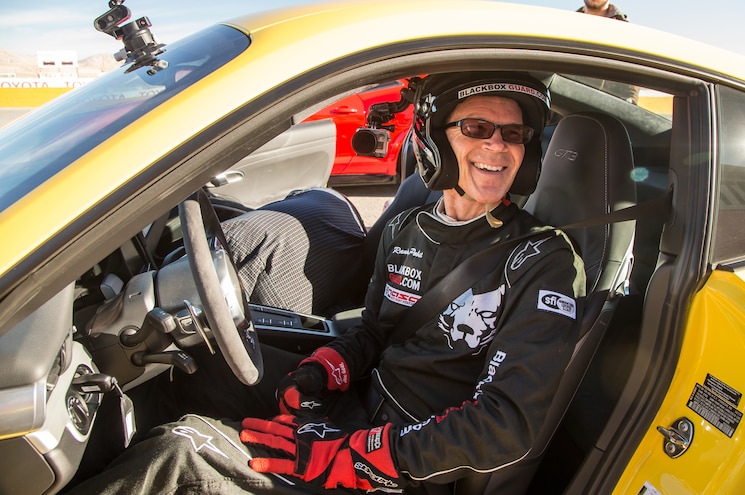 View Photo Gallery | 18 Photos
Photo 11/18   |   2015 Porsche 911 GT3 Randy Pobst
“The turn-in is so accurate,” Pobst said. “Could be the best I’ve ever felt in a 911. The rear will let go in the middle of a corner. It’s drifty; it’s alive. It still has a lot of personality. There’s a lot of race car in this street GT3. It is very much, in many ways, a race car for the street.”
High praise from a man who’s raced 911 GT3s and driven every generation of the street GT3. As we found during instrumented testing, Pobst agreed the car could do more with a bit less oversteer, something a test-and-tune could dial out. Pobst was also impressed with how well the dampers handled Willow’s bumpy pavement, something we noticed on the street, as well.
In fact, short of those trifling legal matters, there’s not a whole lot of difference between how the GT3 drives on the track and on the street. On a real-world road, where there aren’t run-off areas and less-hard tire walls to save you, the GT3 feels almost unchallenged. The car’s limit of adhesion is so high that you can simply drive as fast as you want to without worrying too much about exceeding them unless you do something exceedingly stupid. Of course, those exceedingly stupid moments are why finding this car’s limits are best left to the track, but it isn’t any less fun on the road. There’s no worrying about brake fade or tire limits or upsetting the chassis. At anything less than suicidal speeds on public roads, it just works.
Bemoan the lack of a manual transmission all you want. Porsche set out to make this car the fastest it can be around a racetrack, and it succeeded. Yes, it’s expensive, yes, it’s complex, and yes, the transmission shifts for you in a near-telepathic fashion, but if you want to leave supercars in the dust, this car will do it. 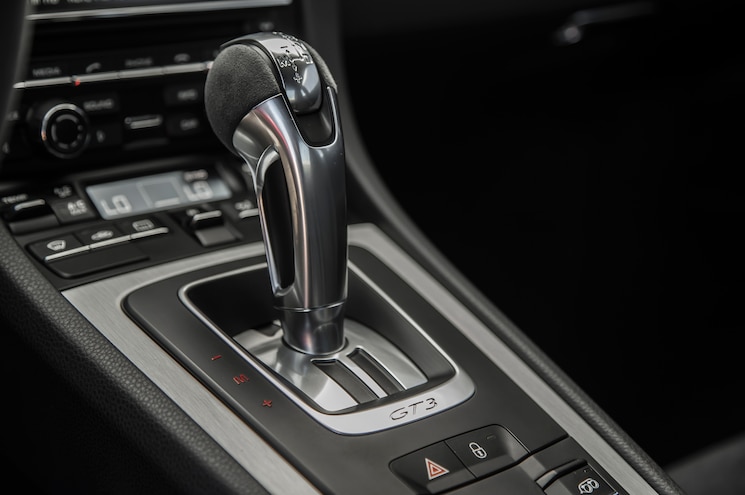