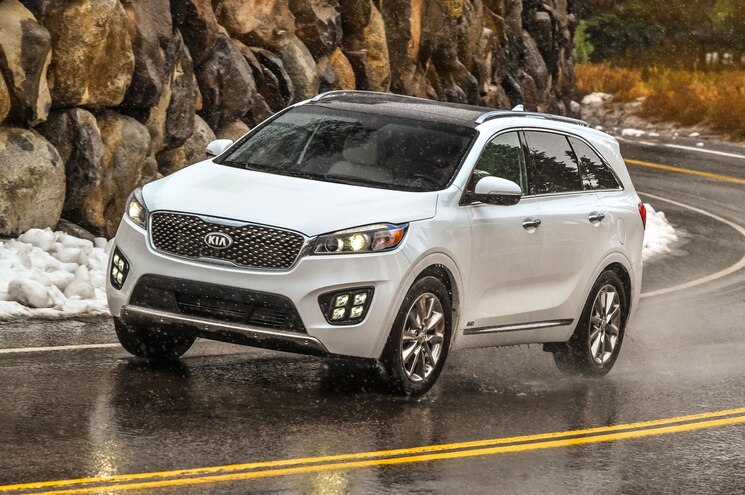 It's tough to overstate the significance of the Sorento to the Kia brand. It was the first Kia to be produced in the U.S.; the first Kia to break 100,000 annual sales; and as Kia itself says, the model is a "core pillar of our brand." That means it's important not to screw up the new 2016 Sorento. Fortunately, Kia has only made it better.
Although there is much on the Sorento carried over from the previous year, Kia has brought significant improvements that are easy to appreciate. For example, overall length and wheelbase are up 3 inches on the outgoing version. We're normally against automobiles growing in size, but the previous Sorento seemed to be stuck in a no-man's-land between compact and midsize SUV options. The dimensions increase gives the 2016 Sorento the ability to compete better with models such as the Jeep Cherokee and allows more room for the vehicle's optional seven-seat, three-row configuration (five seats and two rows are standard). 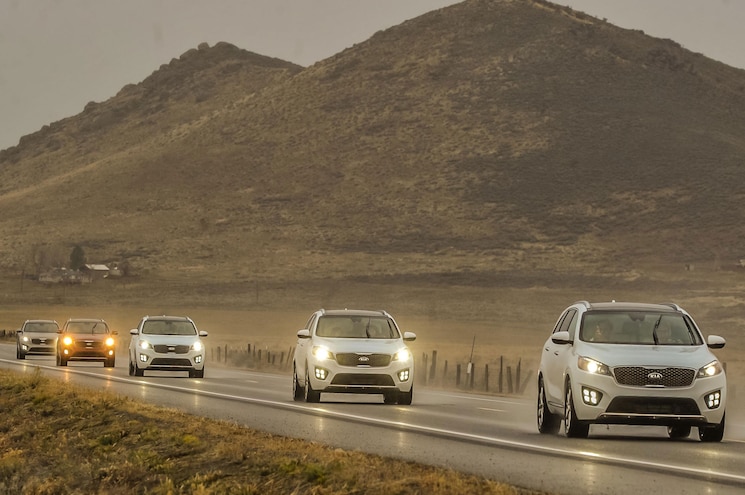 View Photo Gallery | 40 Photos
Photo 2/40   |   2016 Kia Sorento SX Limited Lineup In Motion
The length increase boosts cargo capacity behind that third row by nearly 2.0 cubic feet, and overall cargo volume is up 1.5 cubic feet. Rear passenger space gets a 0.5-inch increase, and the second row feels especially roomy, excelling in leg, head and shoulder room. The third row will always be cramped in a vehicle of this class, but the ability to slide the second row forward helps a little. Still, the third row will be best suited for small children.
The Sorento has also been given a new engine -- the 2.0-liter turbocharged four that serves duty in several other Kia/Hyundai models, including Kia's Sportage. In the Sorento, the mill produces 240 hp and 260 lb-ft of torque and is paired to the same six-speed transmission as the existing engines. Those engines include the naturally aspirated base 2.4-liter I-4, which allows 185 hp and 178 lb-ft, and the familiar 3.3-liter V-6, making 290 hp and 250 lb-ft of torque. It's worth noting that towing capacity with the V-6 is up to 5,000 pounds from a previous rating of 3,500 pounds. All engines are available with front-wheel drive or Kia's all-wheel-drive system with a locking mode that keeps torque split evenly between front and rear wheels. Torque vectoring between front and rear wheels is also used in all-wheel-drive models for stability purposes.
The Sorento's styling has benefited from an overhaul, the lines looking sharper and more upscale than before with the advantage of a slightly lower drag coefficient. Narrower headlights, a more aggressive-looking front valance, and more sculpted fenders are all positive changes. The interior has seen the most notable upgrades, with a total redesign that makes the Kia feel closer to a premium option. The optional UVO infotainment display with its 8-inch screen and vibrant, sharp graphics continues to impress. Hard buttons for regularly accessed features run alongside and make all the difference in system maneuverability. New soft-touch materials fill the cabin, and the color schemes of the upper-end SX trim vehicles we saw are nicely coordinated, though we found the gray-tone dash to look a little dour compared to the black option. 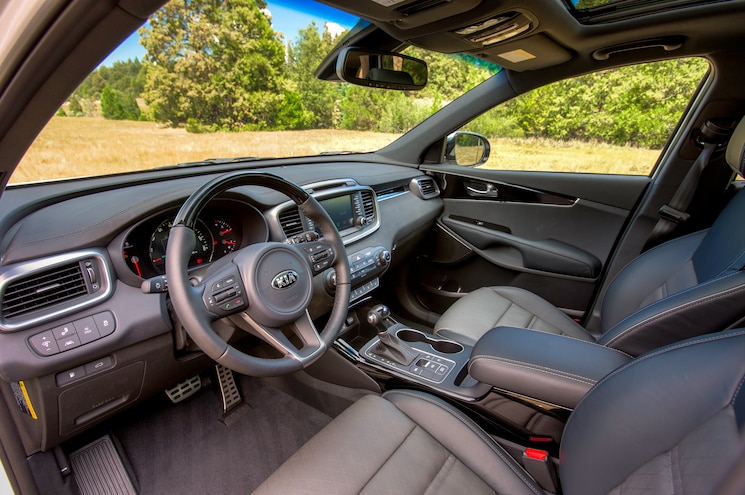 View Photo Gallery | 40 Photos
Photo 6/40   |   2016 Kia Sorento SXL Interior
Upper-level options include Nappa leather interior surfaces similar to those used in Kia's flagship K900 sedan, heated and ventilated front seats, and a host of safety technology that includes forward collision warning, smart cruise control, blind spot detection, rear cross traffic alert, and a surround view parking monitor. All models offer switchable drive modes, which change steering weighting and transmission shift points.
Our drive experience was limited to all-wheel-drive models: an SX version with the V-6 and an SX Limited version with the 2.0-liter turbo. We found a lot to like about each. The cabin in both vehicles is extremely quiet at virtually all speeds. Even in the stormy conditions that affected our drive program in Lake Tahoe, California, it was remarkably easy to carry on a conversation at freeway speeds in the midst of a near-torrential downpour. Ride comfort is also good; damping is on par with the more supple options in this class. Thanks for this goes in part to the new Sorento's increased torsional rigidity (increased 14 percent) and revised suspension bushings, subframe, and geometry. Meanwhile, the all-wheel-drive system never put a foot wrong, even when contending with the minor ice and snow we experienced on our wintery route.
We haven't always been tremendous fans of the 2.0-turbo engine, generally feeling like it rarely provides the instrumented performance that its output should be capable of on paper. Although we still haven't had a chance to take the Sorento to the track, the general character of the turbo engine was preferable to the V-6. A hint of turbo lag didn't give it the immediate thrust off the line of the V-6, but at freeway speeds the turbo engine seemed less strained to pass slower traffic and was much smoother and quieter in the upper reaches of its rev range. The six-speed automatic was reasonably capable in both applications, though it seemed a little more eager to downshift with the 2.0-liter turbo. The optional rack-mounted electric power steering gave more direct feeling than in previous Kia products.
The 2016 Kia Sorento is in dealer showrooms now and appears to represent good value in its class with a starting price of $25,795 for a front-wheel drive, 2.4-liter L-trim car. How it stacks up against such rivals as the Jeep Cherokee and Toyota Highlander, we look forward to investigating soon.