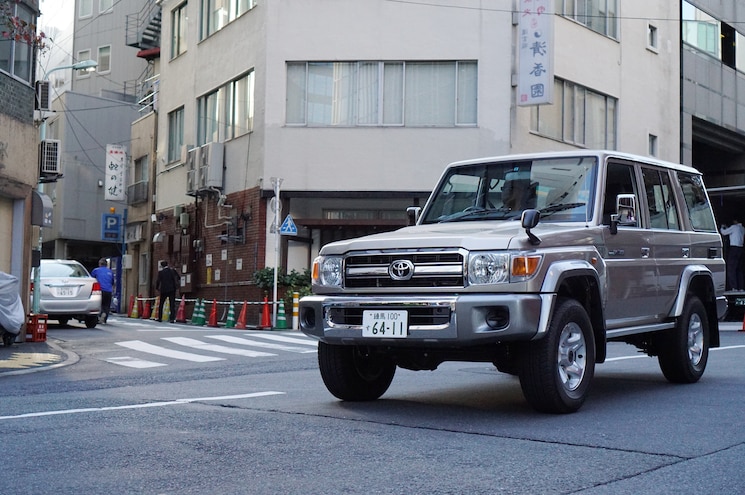 You know that cool Toyota utility vehicle you see on the National Geographic channel, roaming among rhinos and lions in Kenya? Or the one on CNN, navigating sand dunes in Saudi Arabia? A little more than 30 years ago, Toyota debuted that vehicle: the Land Cruiser 70, a no-nonsense SUV that earned legendary status for its go-anywhere capabilities and unrivaled durability and reliability. From Africa to Australia to Asia to the Middle East -- but sadly never to the U.S. -- the 70 has traversed virtually every topography known to man. And rest assured that most of those old 70s are still traversing as you read this.
To celebrate the 70's big 3-0 -- and to satiate demand from the Japan market after the LC 70 went bye-bye in 2004 -- Toyota has launched a modernized version, dubbed the 30th Anniversary Commemorative Edition, just for JDM consumption. And lucky for me, given my current digs in Tokyo, I got the chance to sample the neoclassic LC (along with associate editor and 3-0 birthday boy himself Nate Martinez, who was celebrating with a trip to the Land of the Rising Sun).
Read about our time exploring East Africa in a modified 70-Series Land Cruiser RIGHT HERE. 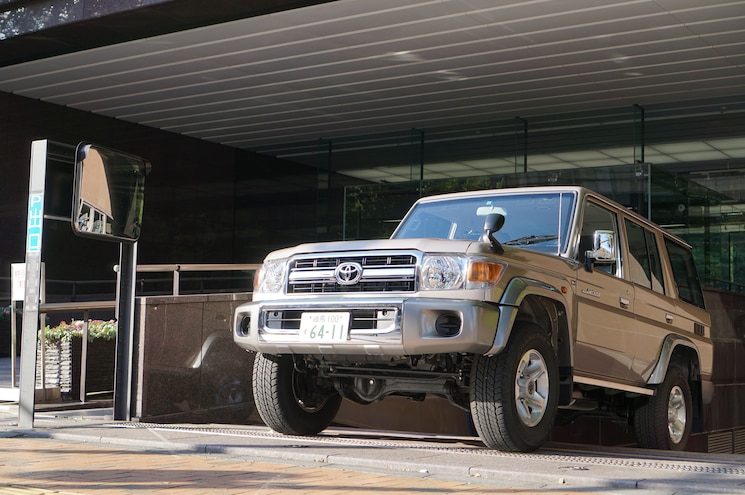 View Photo Gallery | 43 Photos
Photo 2/43   |   2015 Toyota Land Cruiser 70 30th Anniversary Commemorative Edition Front End
Toyota is offering the commemorative LC as a van (aka SUV) and a pickup, the latter fitted with four doors and a utilitarian-looking 5-foot bed that can handle more than 1,300 pounds of cargo. The van's cargo hold is voluminous, as well, measuring 54 inches deep (with the seats stowed), 57 inches wide, and 44 inches tall -- that's around 80 cubic feet of space.
Similar to the LC 70 that continues to be sold in Australia and Africa, and bearing a strong resemblance to the original, the anniversary editions read like an adventurer's fantasy come true: a minimum of 7.9 inches of ground clearance (van) with up to 8.9 (pickup), a robust ladder frame with rigid axles, an available built-in electric winch, part-time 4WD with dual-mode auto-locking hubs, and optional front and rear locking differentials. Further, the pickup's approach/departure angles of 35/25 degrees are better than the Ford Raptor's 30/23, and the van's 33/23 are close to the new 4Runner TRD Pro's 33/26 -- but not quite as aggressive as the FJ Cruiser Trail Teams Ultimate Edition's 34/31. Ralphie's buddy Flick might have screamed "Stuuuuck!" when he put his tongue to the flagpole in the dead of winter, but that's not a word you'll likely utter in an LC 70.
Power for the anniversary edition comes from a source familiar to Americans -- the 1GR-FE 4.0-liter V-6 found in various forms in the 4Runner, FJ Cruiser, and Tacoma -- but not necessarily to Aussies and Africans, whose 70s are mostly had with I-6 or V-8 turbodiesels. In the JDM 70, the 1GR-FE puts out 228 horsepower and 266 lb-ft, and despite pushing curb weights ranging from 4,650 pounds (van) to 4,800 (pickup), it feels up to the task. In reality, the LC 70 is somewhat sluggish -- think 0-60 in around 9 seconds -- but its standard five-speed manual ratchets up the engagement factor, making it seem quicker than it is. Even with longish throws, the H55 gearbox is easy and delightful to operate. Ditto for the clutch, which is about as forgiving as a puppy. And, go figure, the pedal placement is ideal for heel-and-toe downshifts -- an odd but welcome maneuver in a truck. 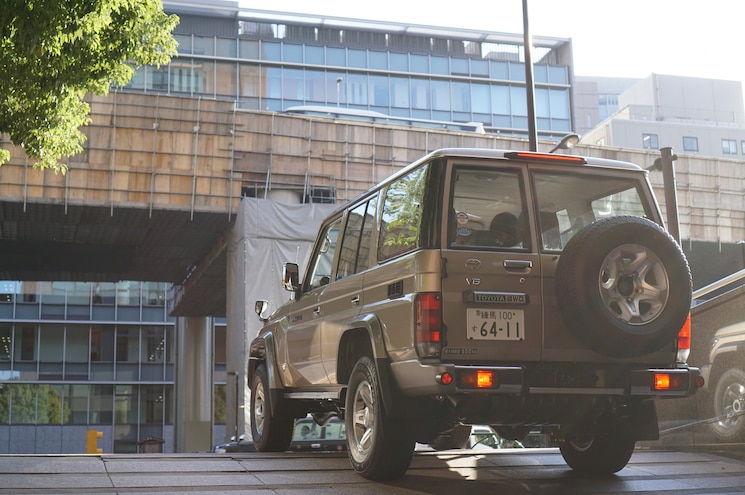 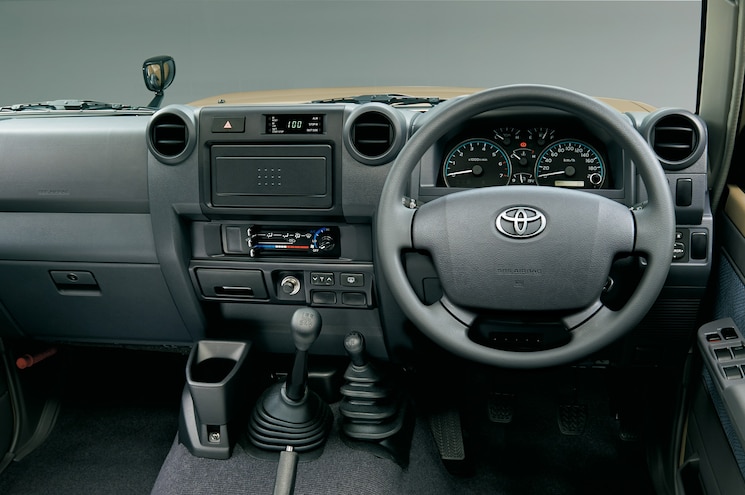 View Photo Gallery | 43 Photos
Photo 10/43   |   Toyota Land Cruiser 70 Re Release 13 Dash
Driving the LC 70 is reminiscent of spending time in a modern V-6 4x4 Tacoma, only with better brake feel (the LC uses larger front discs as well as rear discs in place of the Taco's drums) and a cabin that screams "Back to the Future," as in it resembles the interior in Marty McFly's 1980s Toyota truck. Switchgear, gauges, door handles, lock pulls, and HVAC controls (with sliders!) all appear and feel old-school, like Toyota found them in a time capsule with Wham! and Spandau Ballet albums. Speaking of a time capsule, the LC's list of safety features isn't exactly a model of modernity, unless you define ABS, dual front airbags, headrests, and seatbelts as state of the art.
The ride from the solid front (coil springs) and rear (leaf springs) suspension is bouncy over the bumps but feels relatively cushy otherwise. The boxy styling means there's some moderate wind noise on the highway, but all in all, the LC is a relatively quiet place to motor along, even with the 1GR spinning at 3,000 rpm at 75 mph. The van wears 265/70R16 Dunlop Grandtrek AT20 rubber wrapped around 7.0-inch-wide alloys, and the pickup uses slimmer, more rugged Dunlop SP Qualifier TG21 tires, size 7.50R16LT. Mounted on skinny 5.5-inch-wide steel rims, these TG21s are ideal for slinging mud and pounding dirt.
My limited time in the LC 70s meant no off-pavement excursions, just gallivanting through Tokyo's urban jungle. I got plenty of long looks, certainly from drivers of Nissan Patrols and Mitsubishi Pajeros -- folks who know a thing or two about legendary off-roaders. Toyota has already taken 3,600 orders (2,700 vans, 900 pickups) for the first and only year of sale, far greater demand than the initial 200 per month it had forecast. For those lucky few, I wish them (and their kids and grandkids) many years of joyful cruising. I know I won't soon forget my few days. 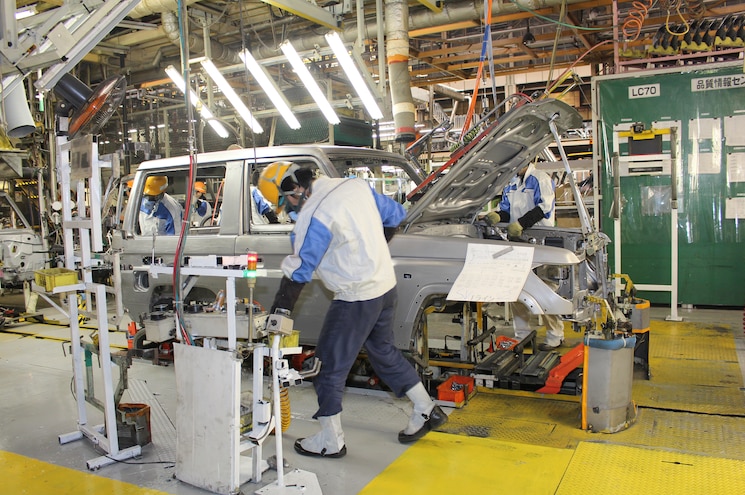