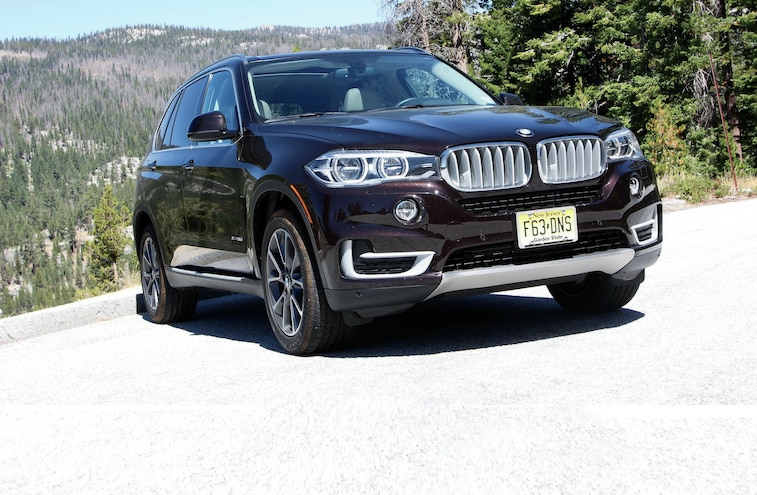 When Americans think of diesel-powered vehicles, the first thing that likely comes to mind are heavy-duty pickups. It’s quite unfortunate that we’ve been trained to think this way. However, thanks to the latest influx of small-displacement diesel-powered cars and SUVs, we’re slowly starting to see the light, and we have Europe to thank for it.
Now, before you go sending angry letters, we’ll address what’s likely question number one. Yes, the American-made Jeep Grand Cherokee is offered with the 3.0L EcoDiesel. And yes, it is fantastic! However, we already looked at that engine as installed in the Ram 1500. So in an effort to not repeat ourselves, we slid behind the wheel of the BMW X5, which is offered with a 3.0L inline six-cylinder in both gasoline and diesel configurations.
Luxury Accommodations
Interestingly enough, when researching diesel-powered SUVs available for purchase in the U.S., most are available from luxury brands. Audi offers up the Q5 and Q7, Mercedes drops an oil-burner in the GLK and ML, Porsche fit a 3.0L V-6 in the Cayenne, Volkswagen gets it done with the Touareg, BMW brings to the table a diesel offering in both the X3 and X5, and lastly, the Grand Cherokee EcoDiesel will give any of these a decent run for their money. What are missing from the list are the entry-level and compact-size SUVs. Jeep had a go of it for a short bit when they offered a 2.8L inline-four diesel in the Liberty, but that experiment was ultimately short lived. Unfortunately, this means getting into a diesel SUV is going to require one to open their wallet just a bit wider than normal. 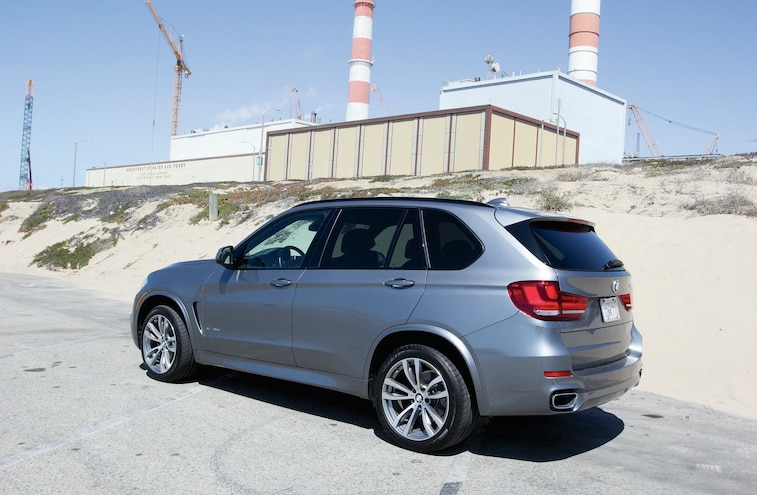 View Photo Gallery | 7 Photos
Photo 2/7   |   2015 Bmw X5 Xdrive 35d Side Shot
The Power Difference
Back in the BMW, we chose the X5 platform for our test largely because of its similar engine options. The X5 is available with a 3.0L inline-six engine for both the 35i and 35d. However, don’t be confused, as aside from obvious, these two engines are completely different animals.
The 35i comes equipped with a turbocharged gasoline direct-injection engine that cranks out 300 hp and 300 lb-ft of torque. It does this through the use of a twin-scroll turbocharger with variable valve control (BMW calls it Double-VANOS and Valvetronic). Tucked under the hood of the 35d is a diesel engine that churns out 255 hp and 413 lb-ft of torque. This engine uses a variable geometry turbocharger, high-pressure common-rail direct fuel injection, and a 24-valve dual overhead cam valvetrain. Keeping weight down for the diesel is an aluminum engine block.
When it comes down to seat-of-the-pants feel, the 35d takes the win hands down. While it comes up 45 hp short to its gasoline sibling, the 113 lb-ft torque advantage sends the portly SUV off the line with a bit more fervor. That kick is short-lived, however, as on paper, the 35i will beat the 35d from 0-60 mph.
Fuel Economy
This is where things start to get a little weird. On paper and in reality, the diesel wins— there’s no question about that. The 35i comes in with an EPA rating of 18 mpg in the city and 27 mpg on the highway, while the 35d enjoys a slight bump to 23 mpg city and 31 mpg highway. Unfortunately, we never got anywhere near those numbers in our real-world testing. 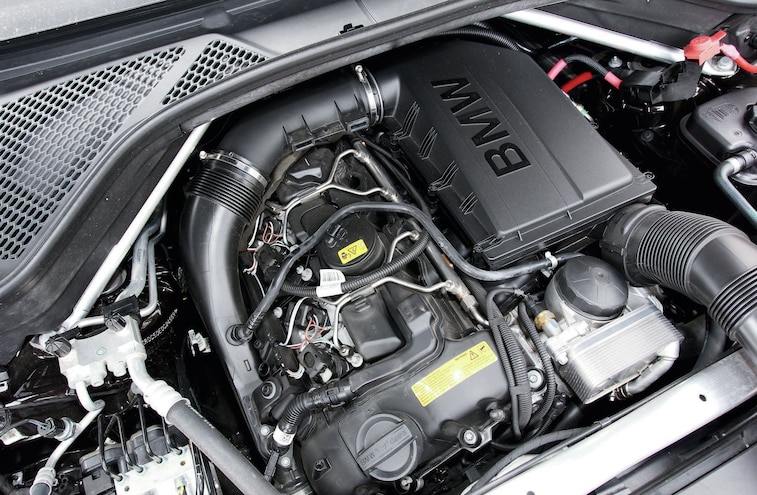 View Photo Gallery | 7 Photos
Photo 3/7   |   BMW has offered inline-six engines for decades and has perfected the art. The 3.0L turbocharged gasoline direct-injection mill in the 35i cranks out an impressive 300 hp and 300 lb-ft of torque.
With our test drivers behind the wheel of both SUVs driving in an urban environment, both vehicles returned fuel economy numbers in the high teens. On a straight, flat, desolate highway run the 35i produced a best tank of 23 mpg, falling short of its 27-mpg rating. Unfortunately, time constraints kept us from making the same trek with the 35d, but we can surmise that it too would have left us scratching our heads.
If we had a bit more time and patience, we could likely reproduce the EPA estimates, but it’s our feeling that we shouldn’t have to “try,” as driving normally should produce these results. While we were disappointed with the fuel economy overall, the diesel still has a healthy advantage over gasoline. And with the 35i’s thirst for premium fuel, the cost difference between the two fuels is negligible. 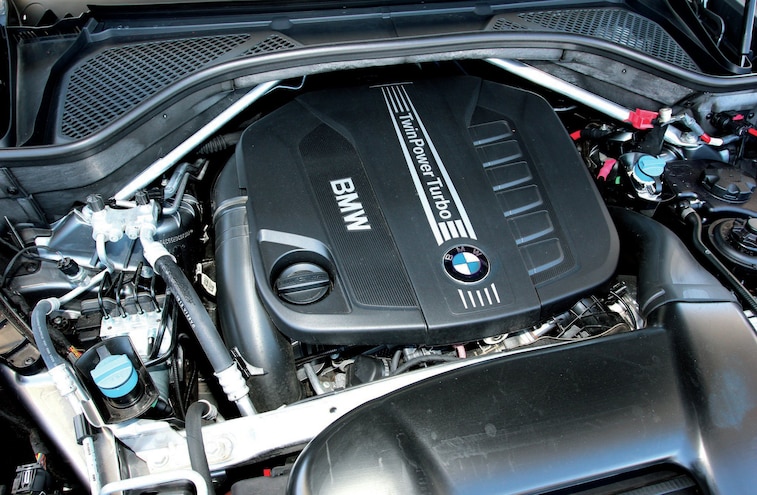 View Photo Gallery | 7 Photos
Photo 4/7   |   2015 Bmw X5 Xdrive 35d Diesel Engine
Driving Technology
We would be remiss if we didn’t at least touch on some of the technology that the BMW X5 has to offer. While available on both gas and diesel variants, it’s these features that make the BMW what it is. Both engines are equipped with stop-start technology, which allows the engine to shut off when appropriate, such as while sitting at a red light, to help save fuel. On the 35i, this process was nearly seamless. However, the 35d seemed to take an extra second or two of cranking to fire back up.
Both vehicles were also equipped with xDrive all-wheel-drive system. The xDrive system works in conjunction with the eight-speed Steptronic automatic transmission to provide a more dynamic driving experience when placed into Sport mode by firming up the suspension, changing torque allocation, and altering shift points. Both the 35i and 35d also have EcoPro mode, which works in the same manner as Sport, but is designed to maximize fuel economy. EcoPro saps all the fun out of the driving experience, but the reward comes in the form of more miles per gallon. 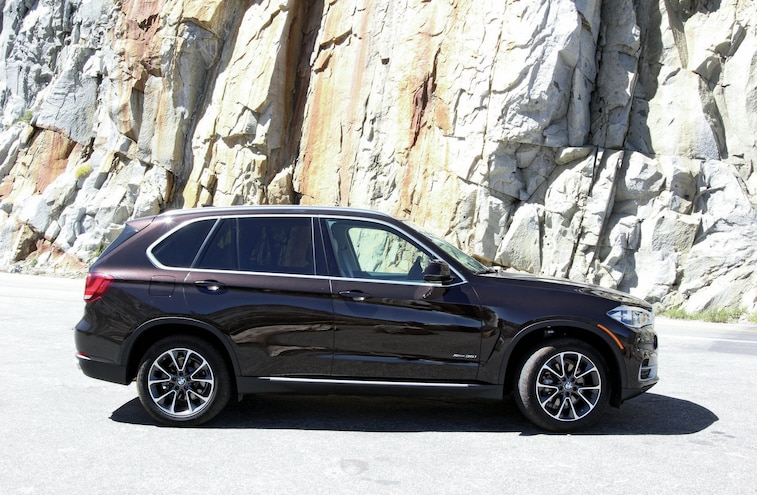 View Photo Gallery | 7 Photos
Photo 5/7   |   2015 Bmw X5 Xdrive 35i Side Shot
Bottom Line
The simple reality is this: If you were sat blindfolded in the passenger seat of both X5 variants and asked to guess which one is powered by gas and which one is diesel, you wouldn’t be able to tell. Both are so highly refined that from inside of the vehicle there’s really no way to tell one from the other besides looking at the fuel gauge. From a cost perspective, the diesel engine will set you back about $1,500 over the cost of a 35i. If and when the cost of diesel fuel swaps back to being cheaper than regular unleaded, the low buy-in will be quickly repaid in fuel economy savings. So if you’re in the market for an SUV, we implore you to give the diesel variant a try. You won’t be disappointed. 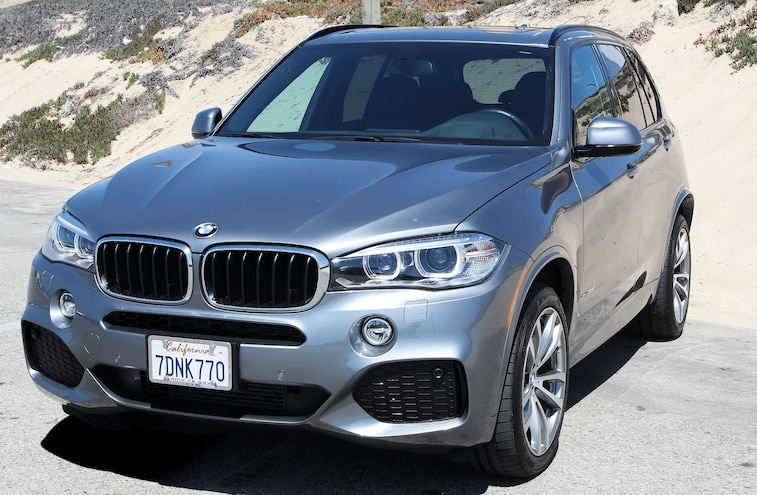 - OF
By Jason Gonderman
691 Articles