GM Returns To The Midsize Market 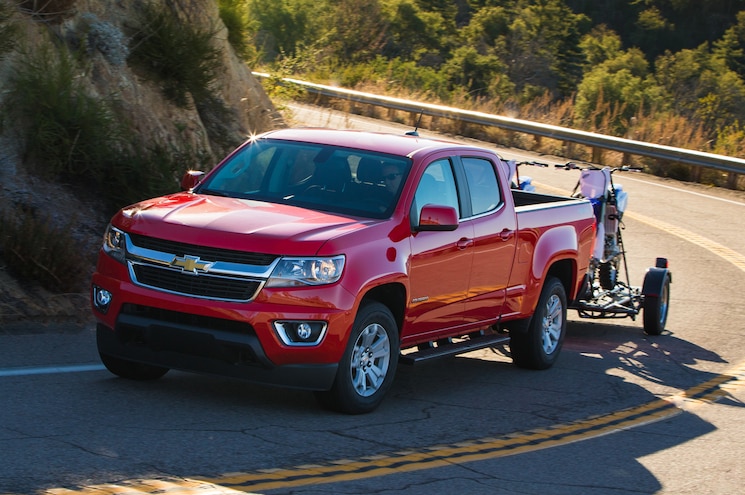 They are two of the most anticipated new trucks of the year, and they are finally here. We recently had the opportunity to get behind the wheel of the 2015 Chevrolet Colorado and 2015 GMC Canyon, and all we have to say is GM has hit it out of the park once again.
The original Colorado and Canyon were introduced in 2004 as a replacement for the outgoing S-10 platform and lived on until 2012. GM’s truck lineup was left void of a midsize offering for three years, during which Ford and Ram both exited the game as well, leaving only the Nissan Frontier and Toyota Tacoma to fill the space. 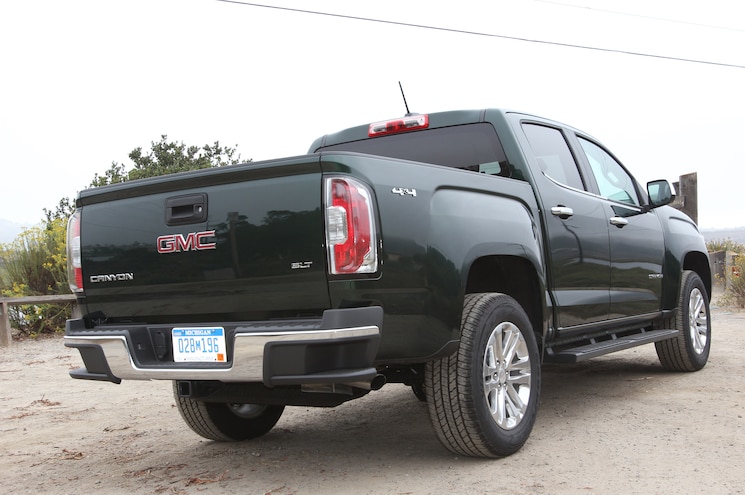 View Photo Gallery | 100 Photos
Photo 2/100   |   All Canyon and Colorado models come standard with the rear step bumper introduced on their 1/2-ton brothers.
With their eyes set on the future, while learning from the past, GM set out to build a class-leading midsize pickup yet again. Starting from the ground up, the Colorado and Canyon are brand-new vehicles and carry many of the features that their older 1/2- and 3/4-ton brethren have been known for, such as a fully boxed frame, fuel efficient engines, and extremely quite and comfortable cabin space. Recently, GM invited us out to San Diego, California, to drive their new baby and handed us keys to practically every different shape, size, and color offered.
From the outside, the Colorado and Canyon appear different, thanks to their distinct front clip, however under the skin they are mechanically identical. We bring that up to preface the fact that both trucks drive the same, so we won’t be differentiating between the two. The first thing that we picked up on once behind the wheel was how small the truck felt. On paper they aren’t much different than a previous generation 1/2-ton, but driving them we noticed that they have the maneuverability of a much smaller pickup. Power and responsiveness was great from both available engines. The V-6 has enough power to tackle any task or load you might throw at it, and the four-cylinder was a real treat to drive, never once leaving us wishing for more in normal, unloaded, city, and highway driving.
Inside the cabin, we found ourselves staring at the same style of instrument panel and center stack as the larger fullsize trucks. Both trucks come loaded with tons of available technology, including an available 8-inch touchscreen display, Bluetooth, Siri Eyes Free, 4G LTE WiFi, OnStar, and lane departure warning, just to name a few. Interior appointments range from simple cloth seats in the base model, up to the rich leather you would expect to find in a Cadillac. Interior space is great and doesn’t by any means feel cramped. That is, of course, unless you’re a fullsize adult attempting to sit in the back of the extended cab, then things get a bit tight. 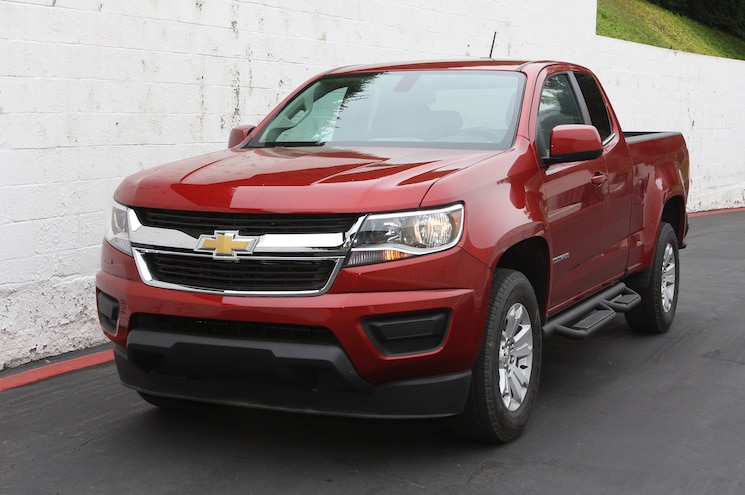 View Photo Gallery | 100 Photos
Photo 6/100   |   Extended-cab models come equipped with a 6 foot 2 inch bed, and this particular two-wheel-drive specimen was stuffed with the 200hp 2.5L four-cylinder engine. We found this combination to be the perfect truck for anyone not needing the seating capacity of a Crew Cab or towing capacity of the six-cylinder engine.
Speaking of space, the trucks are available with two cab and two bed options. There’s an extended cab and Crew Cab, along with 5 foot 2 inch and 6 foot 2 inch beds. Extended cab models are only available with the 6-foot 2-inch box, while Crew Cab models get either. Each of the beds are equipped to accept GM’s new GearOn accessory system and feature two-tier loading, four permanent tie-down locations, 13 additional adjustable cargo tie-down locations, and utility rack stanchions. The EZ Lift and Lower tailgate is both lockable and removable; a factory spray-in bedliner is optional; and the CornerStep rear bumper makes getting into the cargo box a breeze.
Overall, we are extremely pleased with the new ’15 Colorado and Canyon. Our time with the trucks was quick but quality. We were never once left looking for or wanting more. The trucks met or beat our expectations time and time again. These are the trucks that the midsize buyer has been waiting for, and we can’t wait to spend time in one again in the future. 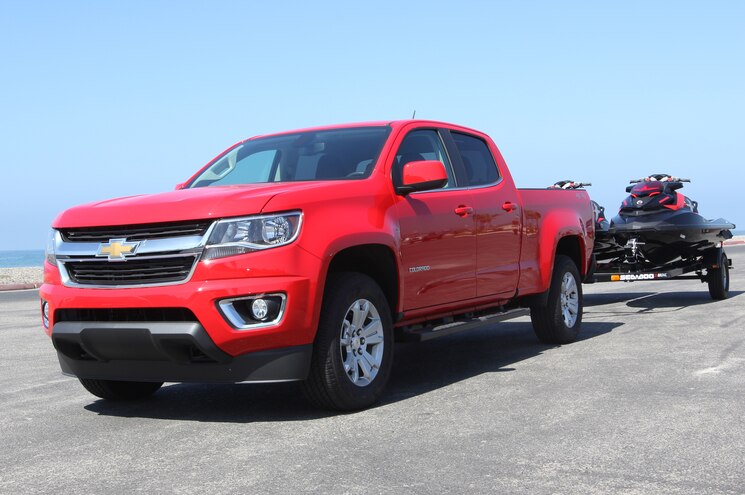 View Photo Gallery | 100 Photos
Photo 10/100   |   When equipped with the 3.6L engine and Z82 trailering package, both Colorado and Canyon are rated to tow 7,000 pounds. The truck barely broke a sweat when hitched to a pair of jet skies, making it perfect for people who occasionally tow a boat, motorcycles, or UTVs. 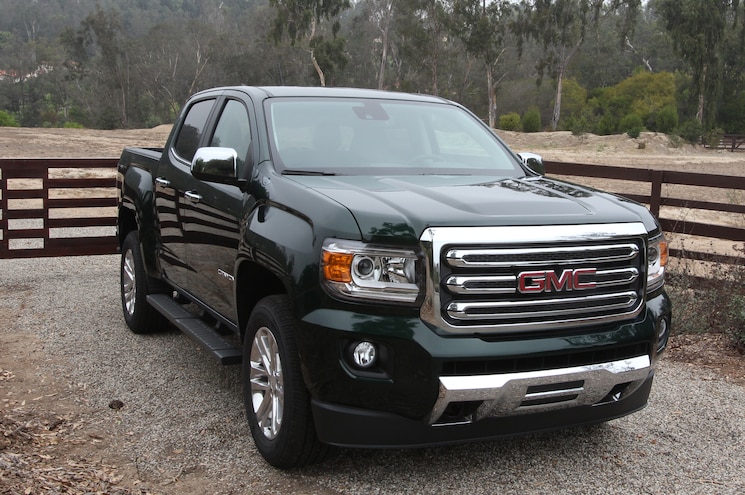 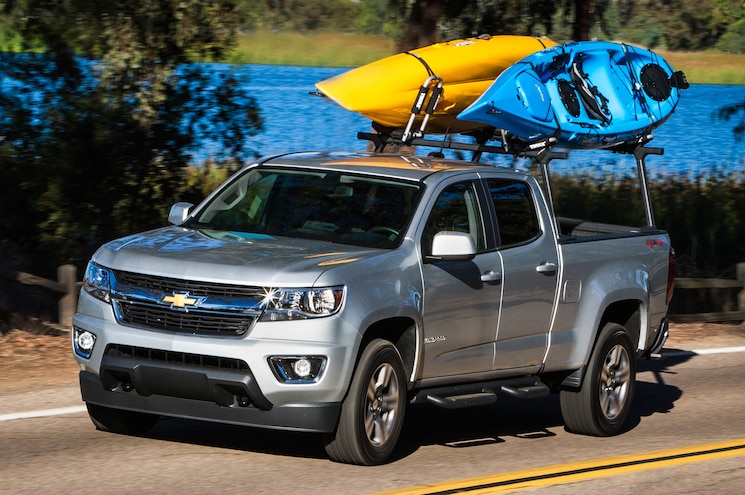 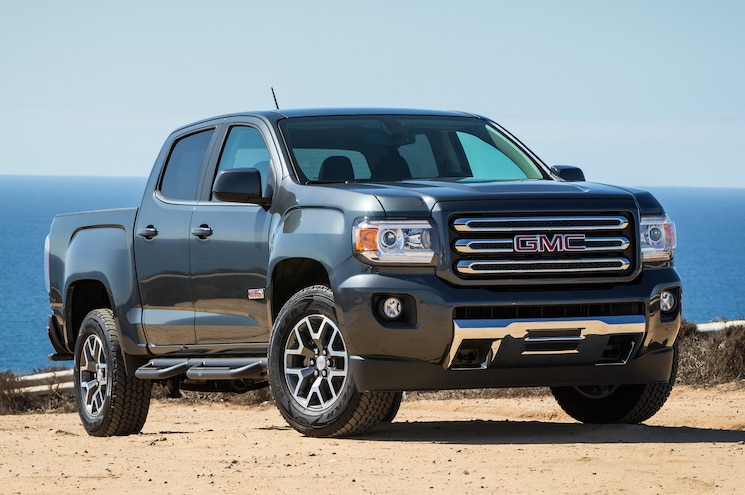 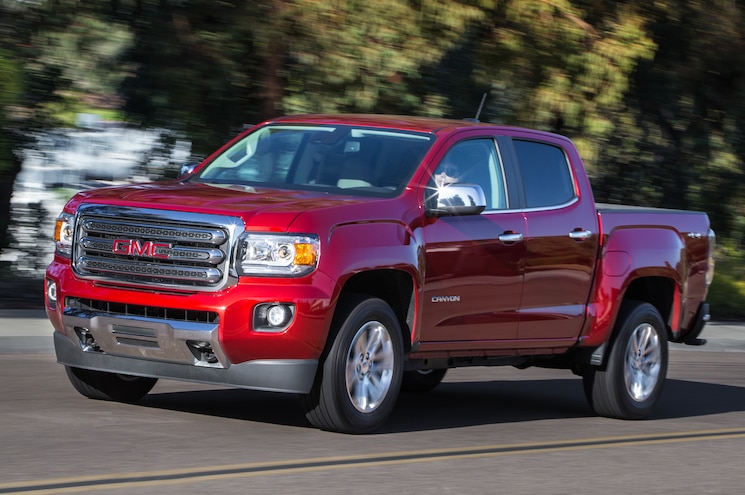 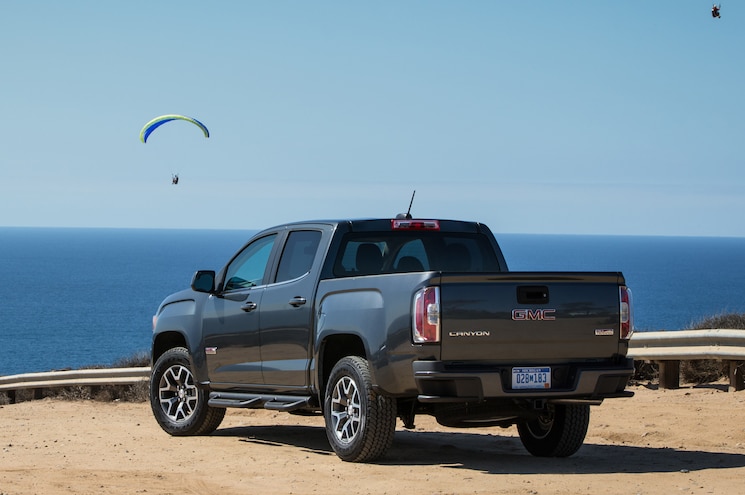 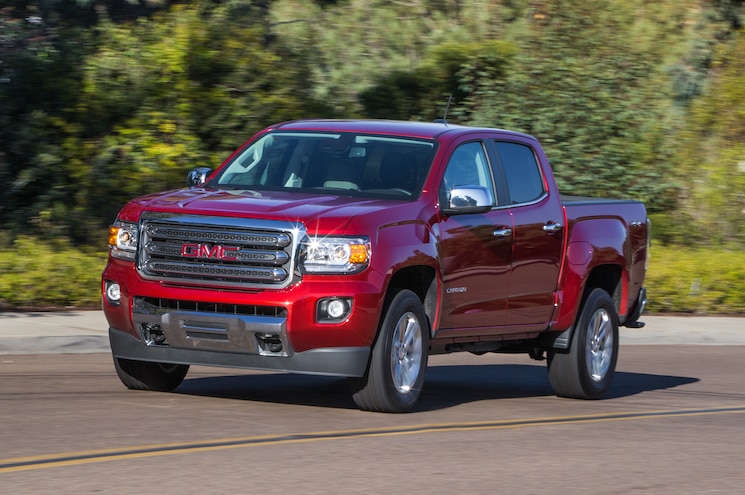 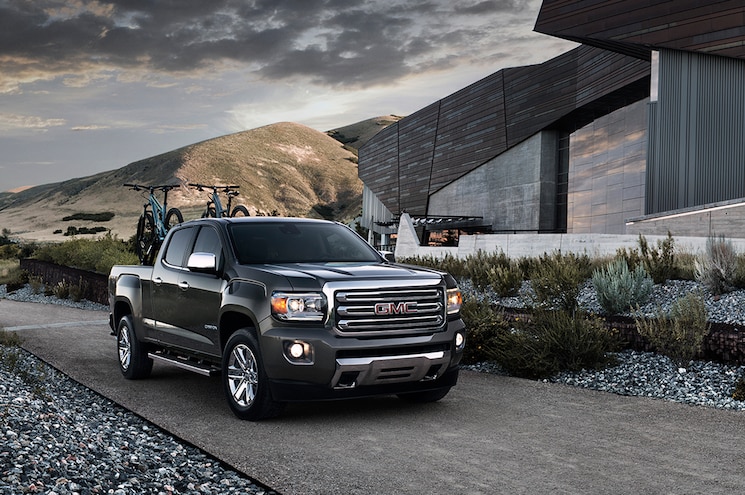 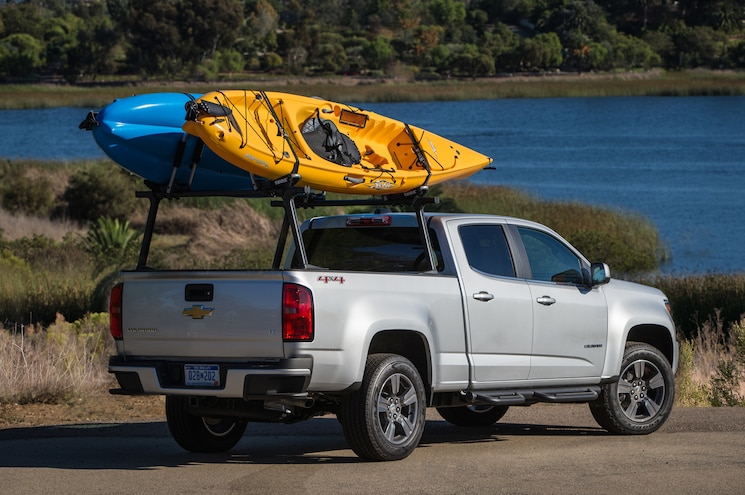