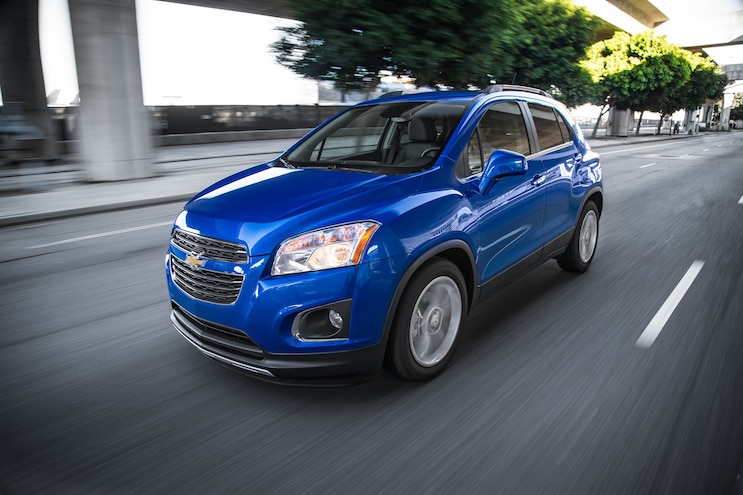 Well, this is intriguing. Really intriguing. Because for extent of my week behind the wheel of the 2015 Chevrolet Trax, I had no express desire to drive something else, something of same milieu. You know, that small-in-size, tidy-in-packaging, cute-in-style, high-in-fuel-efficiency sort of crossover. I had been, in other words, abundantly content.
The Chevrolet Trax is new, but not really. It has traced Korean streets for the past two years. Its story in America indubitably began with Chevrolet noticing the explosive popularity of the compact crossover. Sales of the Nissan Juke and Mitsubishi Outlander Sport were too overwhelming -- and too valuable -- to ignore. 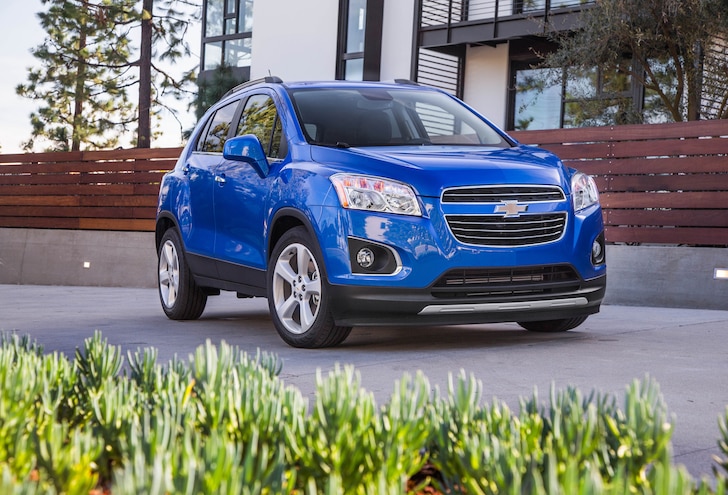 View Photo Gallery | 62 Photos
Photo 2/62   |   2015 Chevrolet Trax LTZ Front Three Quarter
It was, however, in its tardiness to this burgeoning segment that brilliance resided. Let the existing lot figure out what works and what fails, one could imagine product planners reasoning. Let’s see what trendy, city-dwelling consumers love and what they despise, the idea might have been. If that was the gist of their discussions, capitalization on that strategy could pan out to be quite a success.
They sufficiently grasped the eminence of cuteness and quirkiness. Chevrolet’s designers in Seoul, led by Hwasup Lee, implemented simple character lines to craft an anodyne physique. Its overhangs barely exist -- a trait that is said to emphasize a bolder stance. It wears GM’s unbecoming black plastic underbelly. A spoiler atop the hatch cuts wind turbulence. Nearly 400 hours of wind-tunnel testing made sure the exterior was as aerodynamically efficient as it could be. Save for its “I’m a Chevy’’ split grille, it’s downright cute. 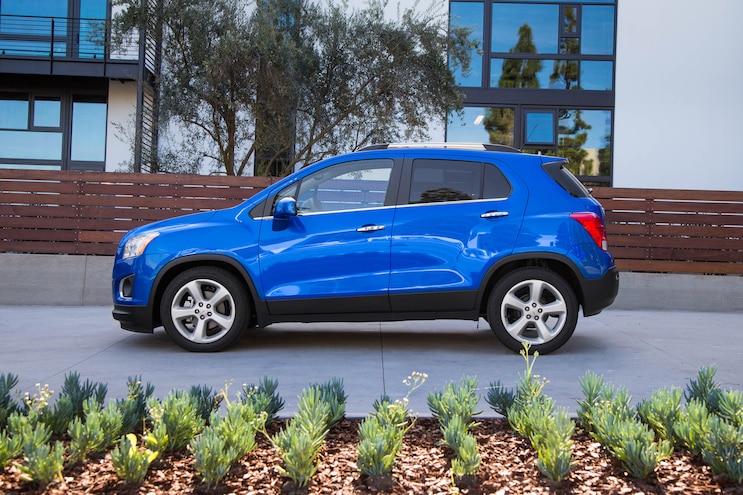 View Photo Gallery | 62 Photos
Photo 6/62   |   2015 Chevrolet Trax LTZ Side Profile
Few bystanders will crick their necks to have a look, as many do when a Juke passes. The Trax has neither the sportiness nor the ruggedness of a Mitsubishi Outlander Sport or the evocativeness of the forthcoming Mazda CX-3. But within its body, that unpretentious, modest body, the Trax ignores few, if any, of the core ingredients appreciated by urbanites. Flashiness isn't a priority. Something that emulsifies coolness, nice looks, and generous miles-per-gallon is -- even better if it can be jockeyed painlessly in messy metropolises.
Mini measurements are requisite. Its 100.6-inch wheelbase, 168.5-inch length, and reconfigured-for-the-U.S. electric power steering give the Trax a tight 36.7-foot turning circle. Committing U-turns and squeezing into downtown L.A.’s cramped spaces were a nonissue. It fit in spots -- crevices, really -- that other CUVs would need to bypass. The standard rearview camera and rear park assist are a godsend in this regard.
Buyers appreciate features. Buckets of features. That’s why at the base LS level there’s a long list: a responsive Chevrolet MyLink-enabled 7-inch touchscreen, OnStar with 4G LTE connectivity (with a free three-month/3-gigabyte trial), Bluetooth audio streaming, Siri Eyes Free, BringGo navigation support, rearview camera, a sole USB input. Higher LS and LTZ trims add leatherette, heated and power seats, a Bose audio system, and a sunroof. 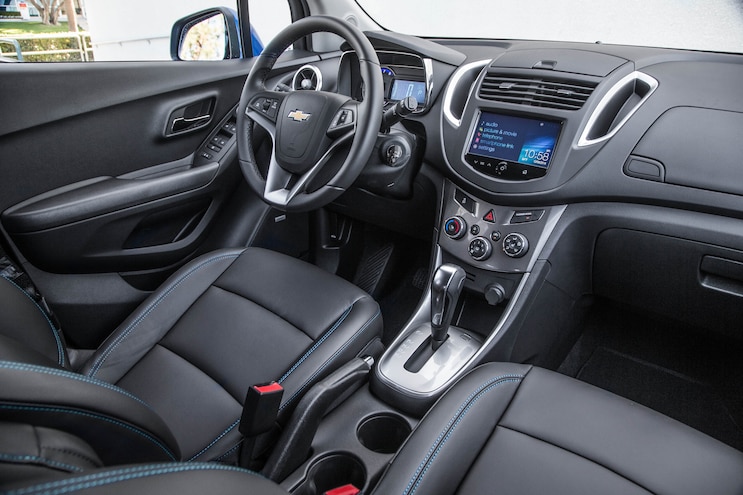 View Photo Gallery | 62 Photos
Photo 7/62   |   2015 Chevrolet Trax LTZ Interior View
Connecting a device via Bluetooth was a no-brainer. If wielding a smartphone is routine, you’ll find wiping and poking the menus intuitive. Fine-tuning infotainment and Wi-Fi settings was smoother than activating some other cars’ climate controls. As in its Sonic sibling, the seven-speaker Bose system’s head unit does away with a CD slot. Hallelujah.
Fifteen cubbies occupy the cabin. Yes, 15. Below the front passenger seat -- which also folds flat to accommodate extra-long items like an 8-foot surfboard -- is a hidden pop-out compartment. Another can be found below the rear passengers’ floorboard, which is great for temporarily hiding small valuables.
The 60/40 rear bench, together with the front passenger seat, can be configured in eight ways. There’s a generous 18.7 cubic feet behind an upright second row. (The Juke has 10.5 cubic feet.) Fold it flat to utilize 48.4 cubic feet of space (compared with 35.9 cubic feet in the Juke). The latter configuration effortlessly gobbled up a set of mounted wheels and tires destined for our long-term Subaru STI Launch Edition. Two colleagues even came along for that delivery run.
External noises barely pierced the 5-mm-thick acoustic glass cocooning passengers. Soft and hard plastics compose the all-black landscape ahead of driver and co-pilot. The environment isn’t gorgeous, but it isn’t detestable either. It occupies a middle ground that’s about right in look, feel, and usefulness. A two-tone dash is available, providing the Trax with a luxurious touch if desired.
An all-digital instrument cluster sits behind the three-pronged steering wheel. Like the Sonic’s, it was inspired by a sport motorcycle’s binnacle. Its simplicity and clarity are standout attributes. (A few staffers commented that it looked awkward.) Standard LTZ-issued heated front seats cushioned and supported backsides for miles on end. Forward visibility was excellent, though side and rear views were obstructed by the B- and C-pillars. Headroom in all seats felt borderline Suburban-esque.
Traversing downtown L.A.’s cracked and pitted paths highlighted a ride that’s damped well enough to put passengers to sleep. The LTZ-only 18-inch wheels look great, and after sampling an LS trim with base 16-inchers aboard, they do little to disrupt the ride quality. Hours could be spent inside these quarters; it is a comfortable, airy, nicely stylized, uncomplicated environment that happens to also be stuffed in functionality.
For the most part, the 1.4-liter Ecotec turbo and six-speed automatic smoothly channel a maximum 138 horsepower and 148 pound-feet to the front wheels. (All-wheel drive carries a $1,500 premium.) Yet, there was a small learning curve to accomplish this; get on the throttle too quickly and boost tends to build then surge, resulting in unwanted lunging at inopportune moments. 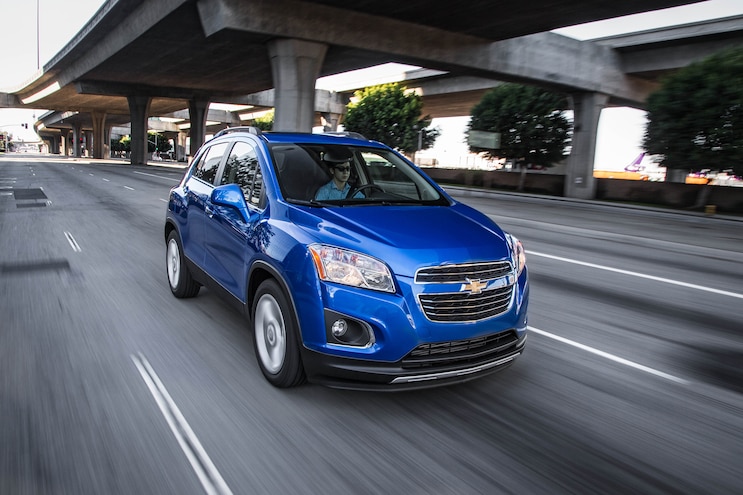 View Photo Gallery | 62 Photos
Photo 17/62   |   2015 Chevrolet Trax LTZ Front Three Quarter In Motion 03
Granted, with such a modest power supply, the nearly 3,200-pound CUV is no rocket. Count off 9.0 seconds for it to arrive at 60 mph from a stoplight; a quarter-mile comes in 16.8 seconds at 80.9 mph. On mildly curvaceous roads, the Trax is predictable and largely fun, albeit not as entertaining and sporty as a Juke or CX-5. The bigger news relates to fuel economy. In both front-wheel or all-wheel drive, the Trax is EPA-rated 26/34/29 mpg city/highway/combined. Those figures trump the Juke’s highway rating (28/32/30) and make it more fuel-efficient than the Outlander Sport (25/32/28).
The value-focused 2015 Chevrolet Trax arrives at a critical time. Many new or redesigned compact crossovers are on the cusp of market introduction, and seducing new buyers won’t be easy. Even so, take it from this humble scribe who spent a year each in our long-term Nissan Juke and Mazda CX-5 testers: With its repertoire of packaging, amenities, styling, and fuel efficiency, the tiny Chevy Trax makes a convincing case for itself. So much, in fact, that you might even forget about the competition. 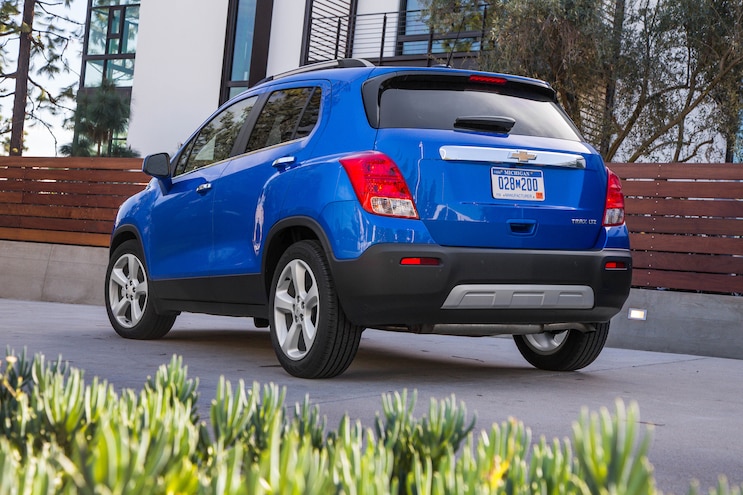