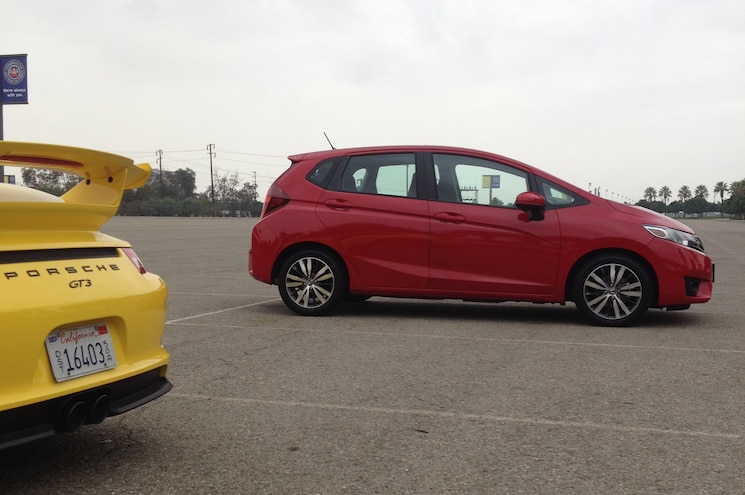 Seeing our 2015 Honda Fit sitting next to a Porsche 911 GT3 at the track was yet another reminder that we really do test everything. So how did the 911 do? Take a look at the Fit's numbers below and cut them by more than half.
That, of course, isn't a knock on the Fit. Remember, this is a budget-conscious subcompact that fits way more cargo than it should while returning decent fuel economy. So with that out of the way, our long-term Fit EX with the continuously variable transmission needed 8.9 seconds to run to 60 mph and 16.8 seconds to complete the quarter mile.
Those numbers are better than the Versa Note SV, which posted a 0-60 mph time of 10.4 seconds and a quarter-mile time of 17.8 seconds. Our recently departed long-term Kia Rio SX was a few ticks quicker to 60 mph at 8.2 seconds, though we should note that car had the six-speed manual. A more fair comparison with the Rio would be the 2015 Fit EX with the six-speed manual that we tested during our 2015 Car of the Year event -- it ran to 60 mph in 7.9 seconds. 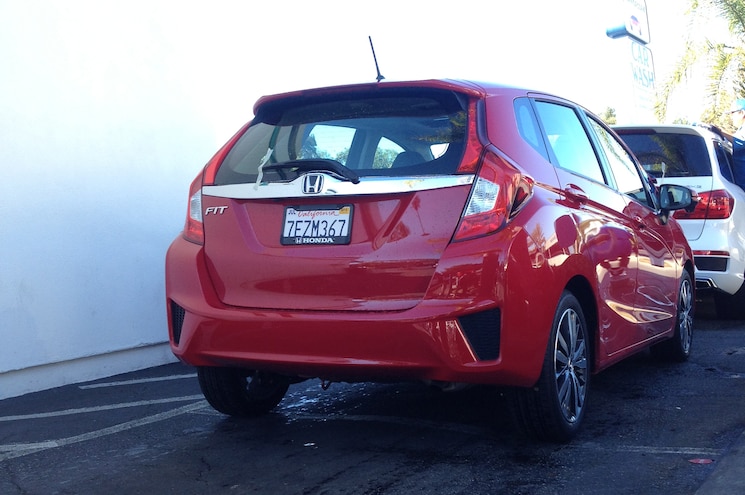 View Photo Gallery | 14 Photos
Photo 2/14   |   2015 Honda Fit LT At Car Wash
As we've repeated numerous times, most Fit buyers aren't interested in at-the-limit performance. What's important is that the Fit feels plenty quick off the line. More grunt during freeway passing maneuvers would be nice, but I've adjusted by mashing the gas pedal sooner than usual.
Moving on to the figure eight, our Fit needed 28.3 seconds to complete the course, which again was quicker than the Versa and on par with the Rio. That number, however, doesn't convey the Fit's athleticism. Honda's small hatch is surprisingly fun to toss around. Steering is responsive, and the suspension set up keeps things settled, whether it's a long, sweeping turn or attacking a sharp corner.
I also took the Fit on its second road trip, covering more than 600 miles on a trip from Los Angeles to Las Vegas and back. The Fit averaged 40 mpg, which was an improvement over my first road trip to Santa Cruz when it returned 37 mpg. The Vegas trip was less of a strain than the NorCal trip -- milder temps meant the AC was rarely used, and a detour to Pahrump, Nevada, took me through more relaxed and slower roads on the southern edge of Death Valley National Park. The Fit's next big test will come when I hand over the keys to the folks at Real MPG for a more official fuel economy test.
More on our long-term 2015 Honda Fit EX here:

- OF
By Erick Ayapana
254 Articles