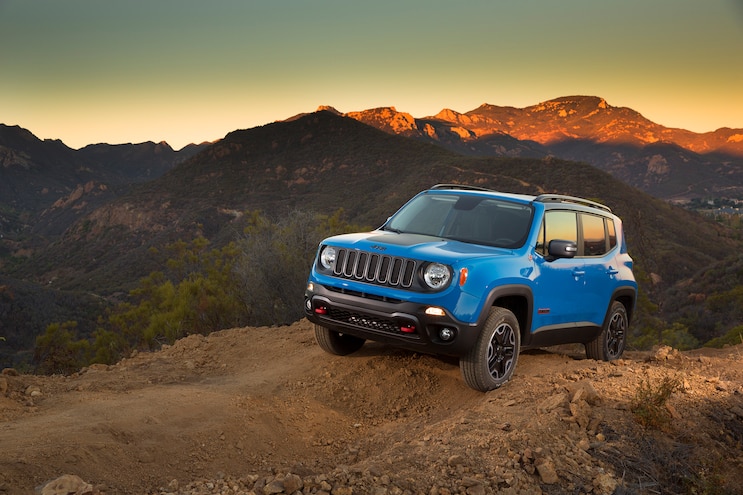 At first glance, there's no vehicle in the Jeep lineup more fitting of the Renegade name than the 2015 Jeep Renegade. A Renegade is defined by my Google machine as "a person who deserts and betrays an organization, country, or set of principles." As the first Jeep to be built outside of North America (in an Axis country, at that!) the Italian Renegade may appear to be traitorous to some of the brand's diehard fan base, but as a first drive of the new baby Jeep proves, the Renegade's still got all the hardware needed to appeal to both the Jeep faithful and those just looking for a rugged little ride.
The Renegade may be built from the ground up in Melfi, Italy, on Fiat Chrysler Automobiles' new small-wide 4x4 architecture, but it still oozes Jeep DNA. About the same wheelbase, height, length, and width as the legendary XJ Cherokee, the new Renegade ticks all the boxes Jeep buyers look for. With its design inspired by the current Wrangler, the original Willys MB, and military jerry cans, the Renegade sports a refreshingly familiar boxy shape complete with Jeep design cues that are both obvious -- like its seven-slot grille and searchlight-sized headlights -- and subtle, like its drooping door line and X-shaped taillamps. 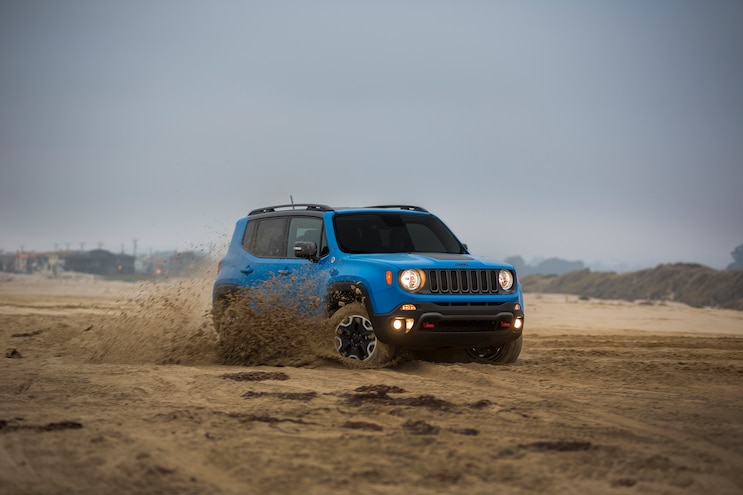 View Photo Gallery | 122 Photos
Photo 2/122   |   2015 Jeep Renegade Trailhawk Front Three Quarters 03
Though the Renegade will share its platform and assembly line with the Fiat 500X, Jeep engineers are keen to point out that they're the ones who did all the heavy lifting on the Renegade here in the U.S. With Jeep's legendary off-road abilities in mind, Jeep engineers spent as much time developing the Renegade on the trails in Moab, Utah, as it did on suburban roads outside its Chelsea Proving Grounds. With the competing demands of both hardcore off-roading and urban commuting in mind, the Renegade's unibody platform is made up of more high-strength steel than any other Jeep in the lineup. According to Jeep, this not only reduces chassis flex on the trail but also makes the Renegade a better drive out on the roads.
Powering the new baby Jeep is a range of familiar engines. Standard is FCA's 1.4-liter MultiAir turbo I-4, which makes the same 160 hp and 184 lb-ft of torque in the Renegade as it does in the Dodge Dart. Unlike its corporate sibling, the Renegade's MultiAir engine comes in both front- and all-wheel drive, and, much to our delight, with a six-speed manual the only available transmission. Available across the board and standard on higher-trim Renegade Limited and Trailhawk models is the Jeep Cherokee's 2.4-liter Tigershark I-4, good for 180 hp and 175 lb-ft of twist, mated to Chrysler's new nine-speed automatic. Two all-wheel-drive systems are available on the Renegade: Jeep Active Drive, which routes power to the rear wheels via a quick-connecting power transfer unit, and the Renegade Trailhawk's Jeep Active Drive Low, which uses a unique final drive ratio that allows first gear to double as a low-range with a 20:1 ratio.

View Photo Gallery | 122 Photos
Photo 9/122   |   2015 Jeep Renegade Limited Front Three Quarter
From a packaging perspective, the Renegade is a pretty neat little Jeep. The cabin is bigger than expected, the materials all feel high-quality, and all the controls in the center stack, including the all-wheel-drive lock and Selec-Terrain switches, are within easy reach. The seats are comfortable up front and in back, and the 40/20/40 rear seats are plenty roomy for adult passengers. The only odd thing about the Renegade's cabin is the view out front -- that accentuated Jeep greenhouse means its designers were forced to push the windshield cowl far forward, with the driver and passengers sitting far back in the cabin. That said, that big greenhouse gives the Renegade a massive amount of headroom -- room that only grows if the removable My Sky roof panels are spec'd. Those roof panels stow under the floor in the Renegade's 18.5 cubic inch cargo area.
The two powertrains, sampled in a near-base Renegade Sport and near-loaded Renegade Limited, are both solid. With so few automakers offering up manual-equipped all-wheel-drive vehicles these days, I started my drive off behind the wheel of a Renegade Sport before Jeep wised up, realized no one would buy one, and took it away. Aptly named, the Renegade Sport may serve as the base model in the Renegade range, but it certainly doesn't feel it. The MultiAir isn't fast, but it does feel quick thanks to the short first through third gears. The shifter is pretty slick too, encouraging the driver to perform quick shifts. The powertrain actively encourages the driver to ring the little Jeep out, and the Renegade mostly delivers, with solid brakes and slow but good steering, so long as you're not driving on tight switchback canyon roads.
While less sporty in character, the Renegade Limited's 2.4-liter engine and nine-speed auto combination is an equally engaging powertrain. Destined to be the volume engine and transmission, the little four-banger offers up good power and performance roughly equal to the MultiAir. The nine-speed transmission continues to improve as Chrysler shoehorns it into more of its models, and the Renegade is its best application yet, with the transmission rattling off quick, smart shifts. The rest of the Renegade Limited package delivers too, with a quiet, upscale cabin, and a compliant, well-sorted ride. 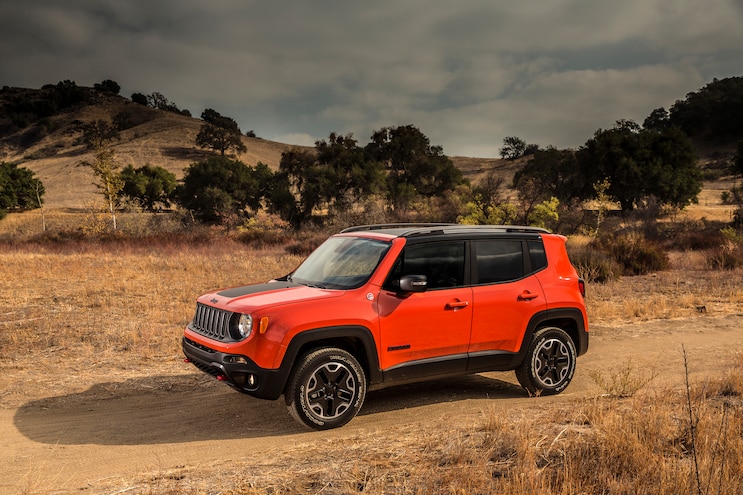 View Photo Gallery | 122 Photos
Photo 16/122   |   2015 Jeep Renegade Trailhawk Front Three Quarters Red 03
While the new Renegade performs well on the road, the burning question most have about the littlest Jeep is how it handles the rough stuff. Pretty well, as it turns out.
Sitting on top of the Renegade lineup is the new Renegade Trailhawk. As is the case on its Cherokee big brother, the Renegade Trailhawk is more than just a badge and trim job. The Renegade Trailhawk gets some unique hardware, including Jeep's Active Drive Low all-wheel-drive system, an 0.8-inch suspension lift (for 8.7 inches of ground clearance), Goodyear Wrangler tires on 17-inch wheels, and front and rear tow hooks rated for twice the Renegade's weight. Thanks to the suspension lift and off-road tires, the Renegade Trailhawk is able to boast better approach, breakover, and departure angles than its Cherokee Trailhawk big brother. On the software front, the Renegade Trailhawk gets Rock mode on the Selec-Terrain system, what Jeep calls an electronic "Brake Lock Differential," and a 4-Low mode, which uses the nine-speed's 4.71 first gear ratio combined with the Trailhawk's 4.33 final drive ratio to effectively take the place of a traditional two-speed transfer case. With first gear functioning as a low-range on the Trailhawk, the Renegade's programmed for second-gear starts, though Jeep says the transmission will kick down into first if the throttle is depressed more than 80 percent.
While many might be understandably apprehensive about the Renegade's Trail Rated off-road chops, a short, technical off-road course proves that the Renegade is infused with plenty of the DNA that's made the brand a legend off-road. The course included dirt roads, simulated river beds, steep rock climbs and descents, and frame-twisting trenches. Per my guide's recommendations, I went through the course the first time in Rock mode, which minimizes the slip allowed by the electronic differentials and locks the Renegade in 4-Low. Not that I expected Jeep to set up a course the Renegade wouldn't be able to handle, but the Trailhawk proved shockingly capable. The first set of soccer-ball-sized rocks was no problem, nor was the incredibly steep, rocky hill following it -- that hill even saw the Renegade pick up its inside front and rear tires as I navigated the course. Those obstacles were soon followed by frame-punishing dirt troughs that the Renegade took to like a billy goat, its underside seeing plenty of sunlight as it pushed and dragged itself through. Instilled with confidence after another go, I spent my last go-around of the course switching back and forth between the Selec-Terrain's modes. While Rock proved most suitable for the particular course, Sand was fun over some of the loose dirt on the course, allowing the Renegade to hang its tail out a bit like a rally car. 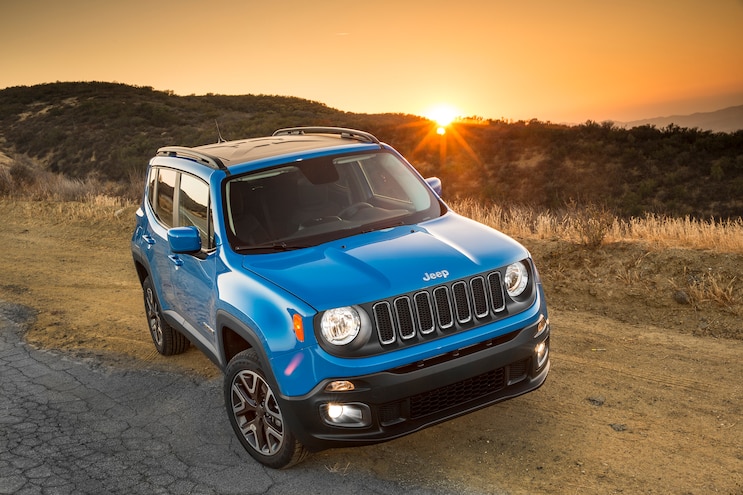 View Photo Gallery | 122 Photos
Photo 23/122   |   2015 Jeep Renegade Latitude Front End 02
While plenty capable off the beaten path, it is possible to get the little Jeep stuck. I found this out rather embarrassingly with the Trailhawk in Auto mode by slowly climbing a steep, gravely hill the tires dug themselves into. Embarrassing, sure, but not the end of the world -- locking on all-wheel drive and getting a little running start got the Renegade to the top of the hill, no problem.
With the Nissan Juke, Kia Soul, Chevrolet Trax, and Mini Countryman targeted as its chief rivals, the Jeep Renegade is priced to compete. Prices start at $18,990 for a base front-drive Renegade Sport and top out at $26,990 for a Renegade Trailhawk. The volume Renegade Latitude will start at $22,990 for a front-drive MultiAir model, and the luxury-aimed Renegade Limited will go for $25,790 for a front-drive Tigershark model. The as-tested price for our Renegade trio ranged from $24,075 for our lightly optioned Renegade Sport 4x4, $33,335 for our loaded Renegade Trailhawk, and $34,175 for our fully optioned Renegade Limited 4x4.
The Renegade may have a name and origin befitting of an alleged traitor, but if our encounter with the new little Jeep has proven anything, it's that the Renegade still manages to stay true to Jeep's roots while appealing to a wider audience. With the Renegade, Jeep has managed to make a world vehicle equally appealing to those doing the mall crawl as those who rock crawl. With the Renegade already off to a flying start in parts of Europe, Jeep is hoping the Renegade will be welcomed with open arms in its home market when it hits dealers here in January.

- OF
By Christian Seabaugh
238 Articles