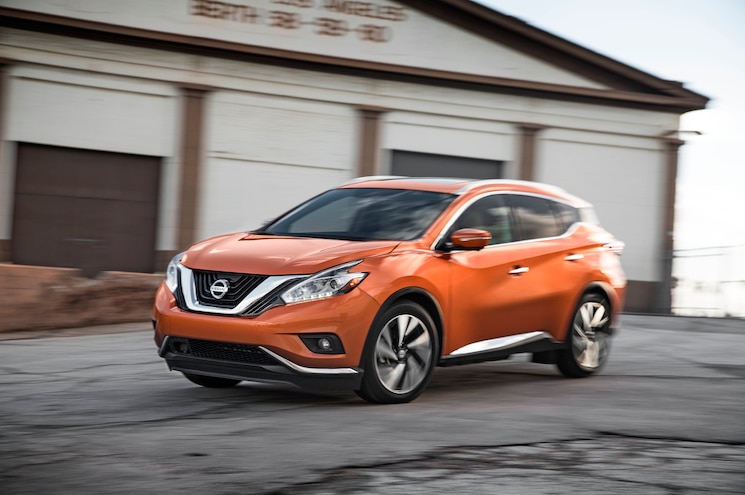 The 2015 Nissan Murano has regained its edge, and we're not just talking about the midsize crossover's unique styling. The Ford Edge-fighter is back in its third generation sporting a design that will never, ever get lost in a shopping-mall parking lot, but independent of that design the Murano is also just plain good. Carrying a base price $50 more than the larger seven-passenger Pathfinder (before regional incentives enter the picture), the 2015 Nissan Murano is a high-quality five-passenger crossover for those who aren't afraid of atrocious rear visibility. We track-tested a front-drive 2015 Nissan Murano Platinum to get a better idea of where it fits dynamically in the segment. So how did it perform in the real world and on the test track?
Let's first address the 2015 Murano's rear visibility. Few of today’s crossovers are devoid of huge blind spots, and the 2015 Murano’s rear visibility is not that much worse than that of the first-gen model. Even so, the tradeoff is a special -- some might say overwrought -- profile view that's a tasteful update from the past two generations. The upswept window behind the rear side doors remains, but by making the D-pillar black instead of body-colored, the crossover's roof has a floating effect. Add in the chrome window trim and the character line along the side of the doors, and you've got a very bold vehicle, even when it's not painted in Pacific Sunset orange. 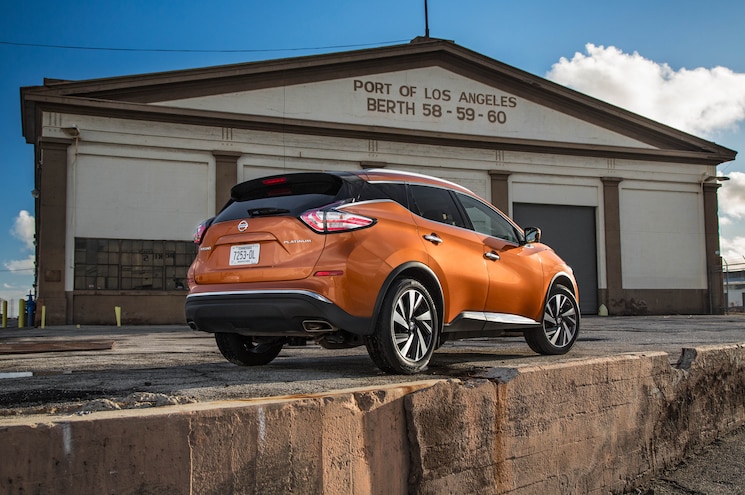 View Photo Gallery | 128 Photos
Photo 2/128   |   2015 Nissan Murano Platinum FWD Rear Three Quarter 02
Not much has changed mechanically on the redesigned 2015 Nissan Murano, which isn't necessarily a bad thing. All Muranos are powered by a 3.5-liter V-6 producing 260 hp at 6,000 rpm and 240 lb-ft of torque at 4,400 rpm. Unlike the Ford Edge, Toyota Venza, and Hyundai Santa Fe Sport, the Murano doesn't offer a lower-volume four-cylinder powertrain to bring the base price including destination below $30,000, but the Rogue should fill that need for most crossover buyers who want to remain in the Nissan family. EPA-rated fuel economy is 21/28 mpg city/highway on the 2015 Murano in front- or all-wheel-drive forms. That's a notable improvement over the outgoing Murano yet still leaves room in Nissan's crossover lineup for the less powerful Rogue, which comes in at 25-26/32-33 mpg.
Mated to an updated CVT, the 2015 Murano never feels underpowered, especially with the somewhat sensitive accelerator pedal. The CVT provides smooth acceleration, but you won't find any Eco or Sport modes that alter steering or suspension tuning. The shifter does have a manual gate for a bit more control, though.
At the track, our front-drive 2015 Murano Platinum tester accelerated from 0-60 mph in 7.1 seconds, a respectable performance for a vehicle with an as-tested 3,920-pound curb weight. That acceleration keeps the 2015 Murano on par with the competition. We've tested a front-drive 2012 Crosstour V-6 at 6.9 seconds, a 2009 Murano SL AWD at 7.2 seconds, a 2014 Toyota Venza V-6 AWD at 6.7 seconds, and an all-wheel-drive 2013 Hyundai Santa Fe Sport 2.0T at 9.1 seconds. The Murano’s raking performance proved strong, with a 117-foot braking distance from 60-0 mph, matching the Venza V-6 AWD and beating the 2013 Santa Fe Sport by 5 feet, the 2009 Murano by 11 feet, and the 2012 Crosstour V-6 by 12 feet. 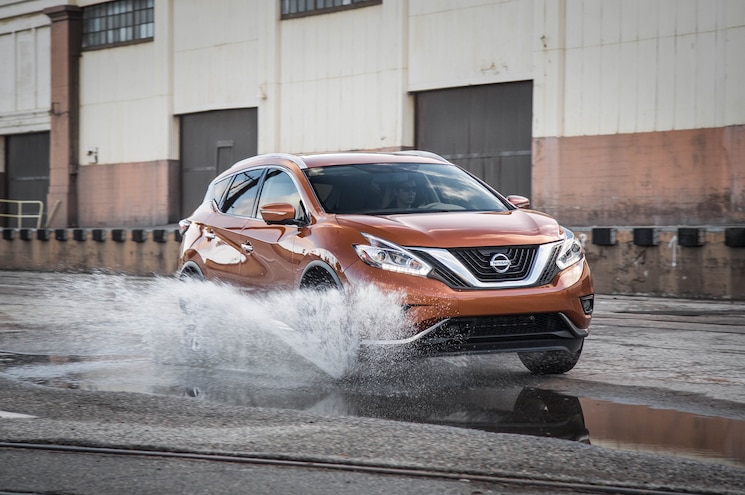 View Photo Gallery | 128 Photos
Photo 6/128   |   2015 Nissan Murano Platinum FWD Front Three Quarter In Motion 02
Around the Motor Trend figure-eight course, the front-drive 2015 Nissan Murano finished in 28.1 seconds at 0.71 g (avg). With 59 percent of its weight over the front axle, the 2015 Murano Platinum is responsive for a crossover and very quiet. Towing capacity on front- or all-wheel-drive models is rated 1,500 pounds, compared to the similarly priced three-row Pathfinder's 5,000 pounds, when properly equipped.
Inside, the 2015 Murano is a fine place to spend your commute. Unique Jasper Pearlescent white trim appears on the doors, in a strip across the dash, and even down the middle of the central armrest for the driver and front passenger. (Brushed silver trim is also available.) Ambient lighting is well-executed, with some adjustable-intensity LED light appearing from beneath a panel on either side of the center console, on the front doors, and, for rear-seat passengers, at the back of the front-seat center armrest.
The ambient lighting is only available on the SL and Platinum trims, but Nissan makes the 8-inch touchscreen and navigation standard on three of the four trims and optional on the base S model. Although I always prefer center-stack screens mounted as high as possible for optimal visibility, the 2015 Murano's infotainment system is easy to use, and there are rotating knobs for temperature, volume, and audio tuning. The front USB outlet is positioned just ahead of the deep center-console storage compartment instead of at the base of the center stack as in many vehicles; this makes room for the heated/cooled seat controls. Because those heated/cooled seat rotary knobs automatically heat/cool to the most recently used setting before the vehicle was last shut off, they will either cause front passengers to wonder why their seat is so hot or be the Best Feature Ever for those who are always cold and immediately turn on their heated seat when they get into a vehicle. 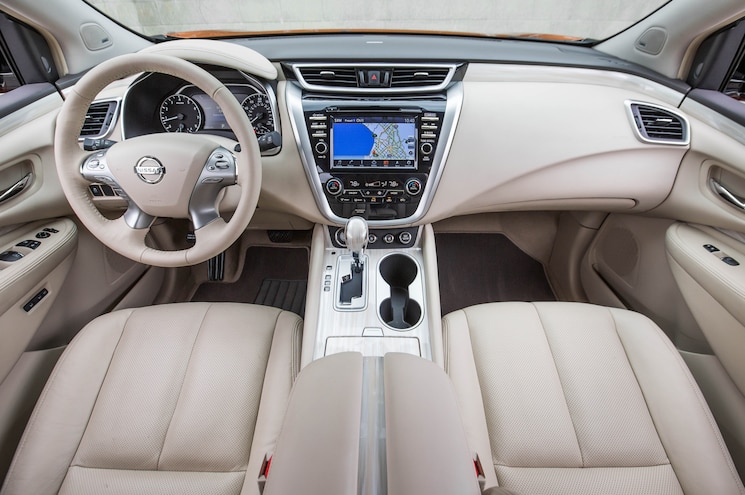 View Photo Gallery | 128 Photos
Photo 7/128   |   2015 Nissan Murano Platinum FWD Interior 03
With an as-tested price of $42,145 including the destination charge, our front-drive 2015 Murano Platinum tester had almost every feature buyers could want, including a power-operated liftgate, 20-inch wheels (most Muranos will ride on 18s), navigation on an 8-inch screen, LED headlights, leather seats, heated/cooled front seats, heated rear outboard seats, a panoramic moonroof, adaptive cruise control, a power-operated steering column, and a Forward Emergency Braking system. All-wheel drive is a $1,600 option on any trim. Our Platinum-trim Murano also had power-return rear seatbacks -- hold down one of two buttons in the cargo area (or redundant buttons to the left of the steering wheel), and one part of the 60/40 reclining rear seats will move back to its upright position.
What you won't find on the new Murano are power-folding side view mirrors, a multi-mode driving system that alters steering and suspension settings, or something similar to the Ford Edge's "let the car control the steering wheel" parking assist systems. Not offering either of those last two features is no big loss, but at some point before the current-generation Murano is retired, we'd love to see Nissan's Smart rearview mirror. The system, which might start appearing on Nissans later this year or in 2016, can replace the rearview mirror's normal display with an LCD screen that projects what a camera is seeing behind the vehicle, minimizing rear visibility issues caused by people sitting in the rear seats or by the swoopy sheetmetal.
Fancy sheetmetal isn't something you'll find on the decently sized Nissan Rogue, which is a little smaller inside than the Murano, but not by too much. Where the six-cylinder Murano really pulls ahead of the less expensive four-cylinder Rogue (besides design and upscale feel) is in cargo space behind the rear seats: 39.6 cubic feet in the Murano versus 32.0 cubic feet in the Rogue, though both have about 70.0 cubic feet of space with the rear seats folded down.
If you like or don't mind the 2015 Nissan Murano's bold exterior styling, the rest of the crossover is a well-rounded package. It's not as cheap as a Nissan Rogue or Ford Escape, but neither is the Ford Edge when equipped with a few options. When you're ready for a midsize crossover with a few upscale touches, consider the 2015 Murano before you sign on the dotted line for that Edge. 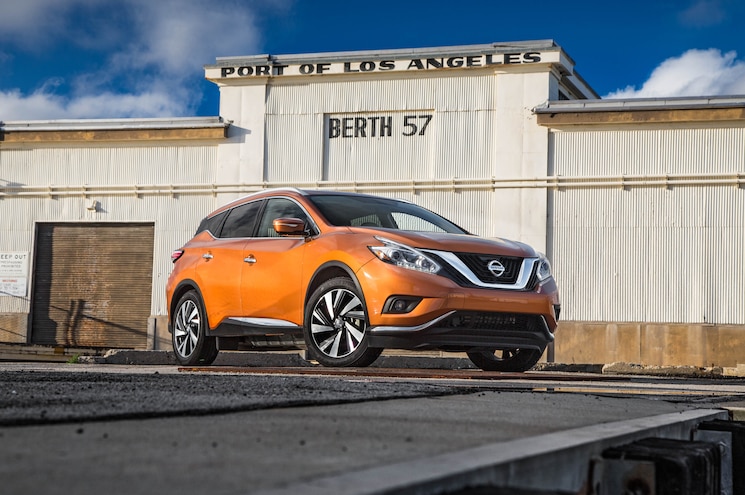