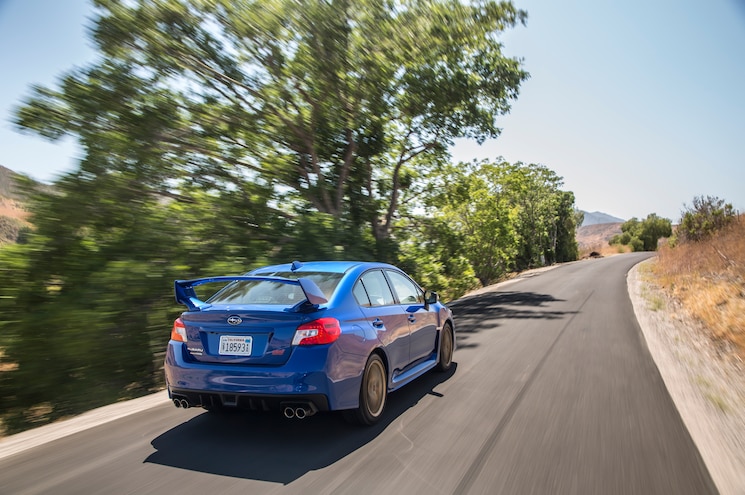 Editor-in-chief Ed Loh and I recently did what the collective staff frequently does: We swapped rides for the weekend. Exchanging has its benefits, among them the broadening our knowledge bases and refreshing senses. And more often than not, the swap is of an apples-to-oranges variety.
Let me begin by stating this is not a traditional MT comparison. I test cars for living -- I automatically size up shiny metal things with four affixed wheels. There are glaring differences between my STI and Ed’s BMW M3, the most significant of which is their $40,000 price discrepancy. One engine’s cylinders stand straight up. The other’s make power lying flat. One is all-wheel drive. The other sends power only to its rear axle. 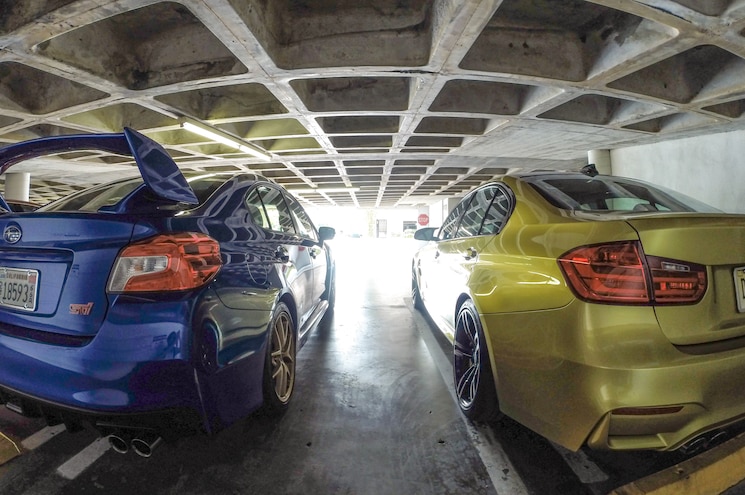 View Photo Gallery | 21 Photos
Photo 2/21   |   2015 BMW M3 2015 Subaru WRX STI Launch Edition
There are similarities. These are some of the most powerful (305/425 hp), pricey ($38K/$78K), and sporty loaners in our current fleet. They are the top dogs of their respective model lines. They look mean. They strut atop fancy footwear. They’re turbocharged. They have four doors and big trunks. And, yes, they are crazy fun.
The STI, though speedy, isn’t M3 speedy. The Bavarian puts down numbers that would make any 3-year-old supercar sweat. Power from its 3.0-liter turbo arrives early, smoothly, evenly over the entire rev band. Zealous first gear launches have the Michelins struggling to connect. Lights blink across the instrument cluster, as if saying, “Eaaaaasy, buddy.”
The STI’s 2.5-liter boxer prefers to punch you. Full force jabs come at 3500 rpm. Their potency peters off as revs approach a 6600 rpm redline. Properly tapping the meaty reserve takes time to learn. There’s nothing really to learn in the BMW, other than you’ll get to your destination absurdly quickly. 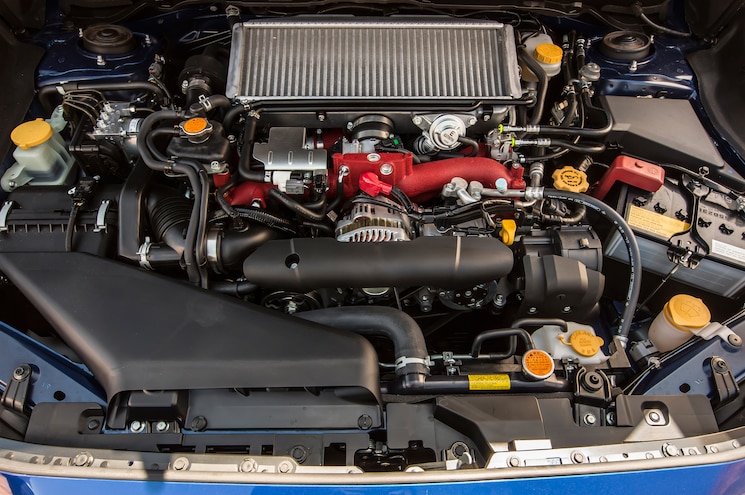 View Photo Gallery | 21 Photos
Photo 3/21   |   2015 Subaru WRX STI Launch Edition Engine
The M3 is poised. The STI is brutish. The M3 is a hunkered corner-hunter donning forged aluminum shoes and $8,150 carbon-ceramic brakes (which are amazing, by the way). The STI is nearly as balanced, but with its tallish stature, skinnier rubber, and smaller Brembos, it will never match the BMW in precision and tenacity. Its Dunlops, though, hold surprisingly well, and its revised-for-2015 dampers counteract its intrinsic top-heaviness like an NFL lineman’s sturdy legs.
The M3, though boisterous, isn’t STI boisterous. Its exhaust note is artificially inflected. It’s creakier, too; the cabin assemblies groan as I navigate driveways, for instance. The STI’s seats are cushier; the M3’s cloth buckets hold tighter (they like to pull your hair, though). The M3’s DCT tends to stumble in traffic. The STI’s hand-built manual gearbox gives crisp shifts time and again, and its hydraulically assisted helm drips with communicativeness.
See? Apples to oranges. I can’t help but to think the STI gives roughly 84.1029% of the M3’s performance for $40,000 less, and matches its entertainment quotient entirely. They’re two different paths leading toward the same destination: fun. Let me not forget the fact that the Subaru has a glorious rear wing and a helpful standard-issue reverse camera aboard. Our $80,000 German has neither. Just saying…
More on our 2015 Subaru WRX STI Launch Edition:
More on Ed Loh's long-term 2015 BMW M3 here: