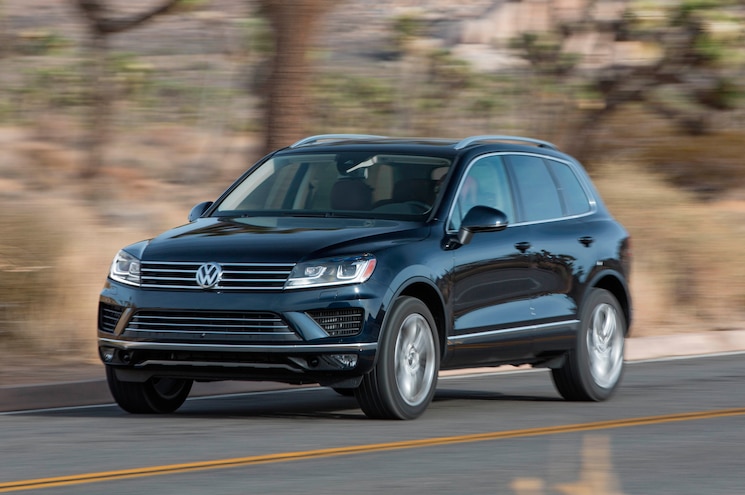 Until Volkswagen's SUV lineup expands in a few years, brand loyalists who want an SUV have only two options: the Tiguan and the Touareg. Sporting squint-and-you'll-miss-it changes for the 2015 model year, the refreshed Touareg carries a semi-premium price tag but might not have what it takes to convince many Acura MDX or Mercedes ML-Class (soon to be GLE-Class) intenders to look past its non-luxury Volkswagen badge.
Still, the 2015 Volkswagen Touareg really is a decent five-passenger luxury SUV. It boasts conservative yet premium styling that provides surprisingly good rear visibility -- not something an MDX owner can say. And the 2015 Touareg's interior is solid. Cover up the Volkswagen badge on the steering wheel and you could fool plenty of folks into thinking the SUV belongs to a luxury brand. For 2015, the Touareg offers new tech, including adaptive cruise control with three settings, a front assist system that (up to 19 mph) can slow the SUV if an obstacle is detected, a lane assist system that can vibrate the steering wheel at various levels of intensity, and a side assist system with side mirror-mounted lights that can be adjusted for brightness. The adjustable nature of these available systems is appreciated; all are available on mid-level trims for the TDI diesel and gas-powered V-6 models. They're standard on the supercharged hybrid model, a low-volume Touareg that will only be sold at select dealerships in one fully loaded form. 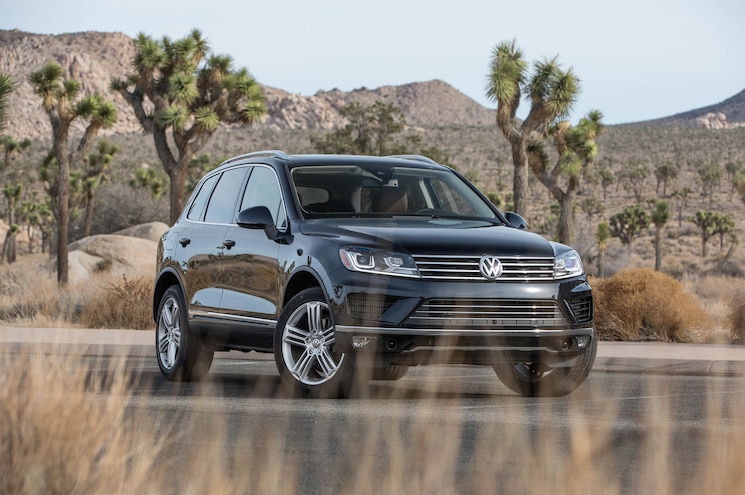 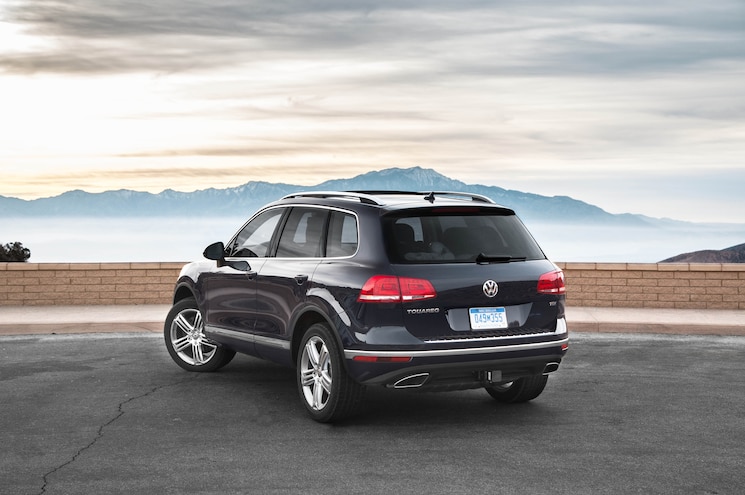 View Photo Gallery | 33 Photos
Photo 6/33   |   2015 Volkswagen Touareg TDI Rear Three Quarter
On the road, the 2015 Touareg feels substantial -- you'll never confuse the Volkswagen's deliberate responses for those of a smaller vehicle. Though the Touareg TDI is always ready for a full-throttle blast, its accelerator pedal doesn't feel as jumpy as that of the gas V-6 model, which has a strong yet muted exhaust note. All Touaregs are quiet, but if you go with the high-end Executive model with its 20-inch wheels (18s and 19s are also available), you'll feel a bit more of the road on some highways.
A commanding view of the road should make up for the body roll expected with most SUVs of this size and heft, though we could do with less rebound from the body when lifting off the brakes after coming to a stop. Once you get moving again, there's a helpful Sport mode for the transmission that holds gears longer for a quicker getaway. All Touaregs have an eight-speed automatic that in gas V-6 and TDI diesel forms was well-behaved, though ultra-sensitive drivers might notice minor shift shock in moderate to aggressive acceleration.
Fuel economy and overall driving range are 2015 Touareg TDI strengths, but the same can be said for the Jeep Grand Cherokee EcoDiesel, Mercedes-Benz ML 250 Bluetec, and BMW X5 xDrive35d. With a 26.4-gallon fuel tank and an EPA-rated 29 mpg on the highway, the 2015 Touareg TDI will last a bladder-bursting 766 miles before needing to refuel with more diesel, a fuel that as this is being written is trending at around $0.91 above the cost of regular gas, according to the U.S. Energy Information Administration. (Go here for current national prices or here for cheap fuel prices near you.) The Touareg gas V-6 and hybrid V-6 models sip premium -- the Acura MDX does, as well, with an EPA-rated 18/27 mpg in all-wheel-drive form and 20/28 mpg with front-wheel drive. (The VW has standard all-wheel drive.) For those few drivers who will actually take the Volkswagen off-road, after driving a 2013 Touareg TDI on some trails, we said that "the Touareg's off-road squad has done an admirable job." 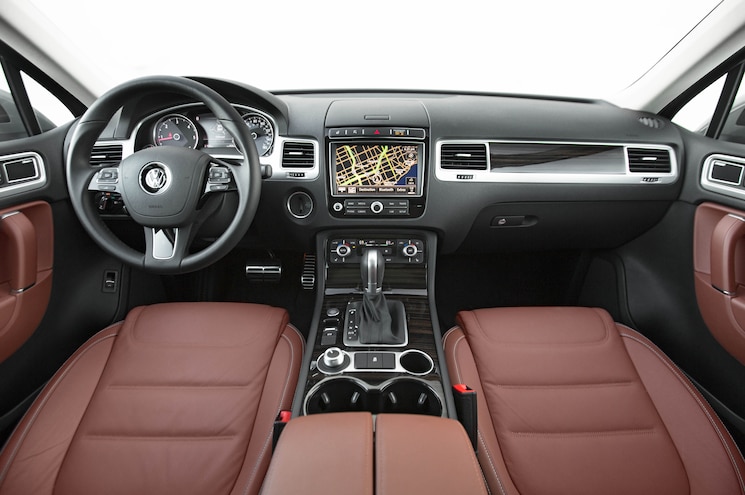 View Photo Gallery | 33 Photos
Photo 17/33   |   NewImage
Inside, the 2015 Touareg's interior befits a vehicle of this price. Our $65,610 tester was loaded with a great panoramic sunroof, 20-inch wheels, all the adaptive safety systems mentioned above, real wood trim, stainless steel pedals, heated front and rear seats, a heated steering wheel, an upgraded sound system, and a multi-camera parking system -- the diesel engine is a $3,500 option on the top three trim levels. We would like the next-generation Touareg to make less obvious to lower-trim SUV owners that they didn't pay for every option in the form of blank and non-functional buttons. Other minor interior niggles include a lack of cooled front seats on any trim level, and there's no brake auto-hold feature -- some vehicles with electronic parking brakes can keep the brakes applied at a long stoplight, automatically disengaging once the accelerator pedal is touched.
Otherwise, we're fans of the high-quality door pulls and the info screen that shows an altimeter, a 360-degree compass, and the angle of the front wheels at any given moment. Also, we're impressed not by the easy-open liftgate but by the power-operated door's quietness — as the door opens, you hear two short beeps and that's it. The easy-open feature requires the person carrying the key fob to wave their foot toward the bumper twice, and, like magic, the liftgate opens. 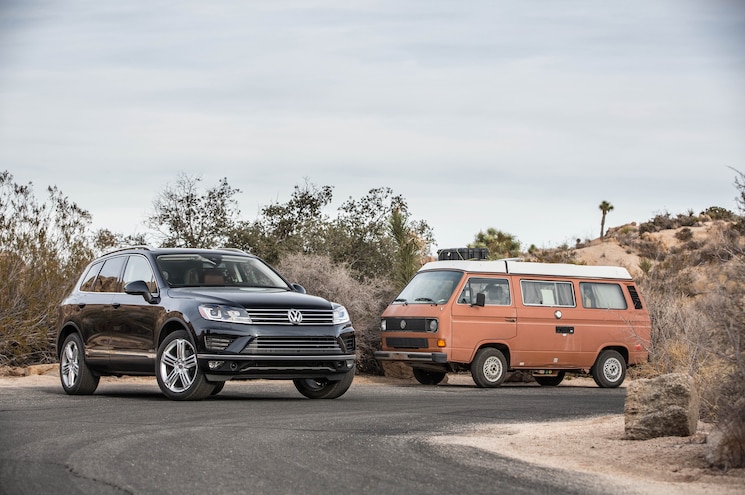 View Photo Gallery | 33 Photos
Photo 18/33   |   2015 Volkswagen Touareg TDI Front Three Quarter VW Van
Assessing value on the 2015 Volkswagen Touareg is a tricky question. At its base or as-tested price, the non-luxury-branded premium-ish SUV is more expensive than the Jeep Grand Cherokee, an SUV that won a comparison in 2013 with three other diesels: a pre-refresh Volkswagen Touareg TDI that placed last, a Porsche Cayenne Diesel, and a Mercedes-Benz ML 350 Bluetec. (Mercedes now offers an ML 250 Bluetec diesel I-4 instead of the discontinued ML 350 Bluetec diesel V-6.). Compared to the BMW X5 xDrive35d, the Volkswagen could be considered a bargain, allowing buyers to splurge on more options for less money, but unlike the Acura MDX and Mercedes-Benz ML, the Volkswagen's basic warranty is for three years/36,000 miles instead of the more pricey luxury brands' four years/50,000 miles.
A few years from now, Volkswagen will likely fill out its SUV lineup with competitors for the less expensive Ford Edge, plus an already-confirmed three-row SUV. Until those arrive, Volkswagen brand loyalists have a respectable premium SUV in the form of the Touareg. It won't send Acura, Mercedes-Benz, or Jeep engineers running, but it should please those who value its balance of available features, conservative luxury styling, and the brand's reputation for diesel-powered vehicles.