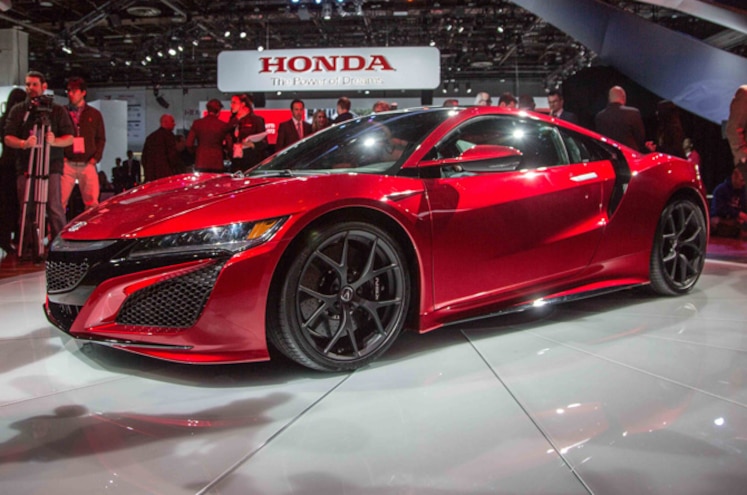 The new Acura NSX isn't a "numbers" car. Yet. That is to say, at this point we don't have many numbers for it. We know it will have six cylinders arranged longitudinally in a V configuration, two turbochargers, three electric motors (two front, one rear), four driven wheels, and nine forward gears in its dual-clutch transmission, but even now, as the near-production version of the car sits in front of us on a clinically clean white floor somewhere in Honda's Southern California R&D facility, there's much we don't know. Engine displacement, horsepower (said to be north of 550 hp), torque, curb weight, and performance figures are undisclosed, even as the car's lead engineer, the affable Ted Klaus, stands next to it, beaming. "Wait until you drive it," Klaus says. "We'll tell you everything then."
We're told the first media drives will be in July, and that's really not too much of a wait, especially considering we've been waiting nearly a decade since the original NSX left the market at the end of 2005. But now that we've seen the second coming of Acura's NSX in all of its composite and aluminum glory close enough to touch -- we've failed to resist that urge several times now -- to say we can't wait is like saying Formula 1 cars are fast. True, but oh, such an understatement. As sexy as the new NSX looks in this article, believe us when we say it's even better in real life.
The road to this point has been a rocky one, filled with fits and starts, hopes and disappointments. When Klaus was assigned the NSX project several years ago, there had already been ideas on what a new NSX could look like. Klaus' first step was to do some research and meet the chief engineer on the original NSX project, Shigeru Uehara. "We met with the original NSX team and just discussed how that project really represented Acura's formative DNA," Klaus says. "We talked a lot about making a vehicle that really respects the driver. Acura was a brand that was formed on the value of making performance accessible to the driver."
Read about the Acura NSX's history RIGHT HERE. 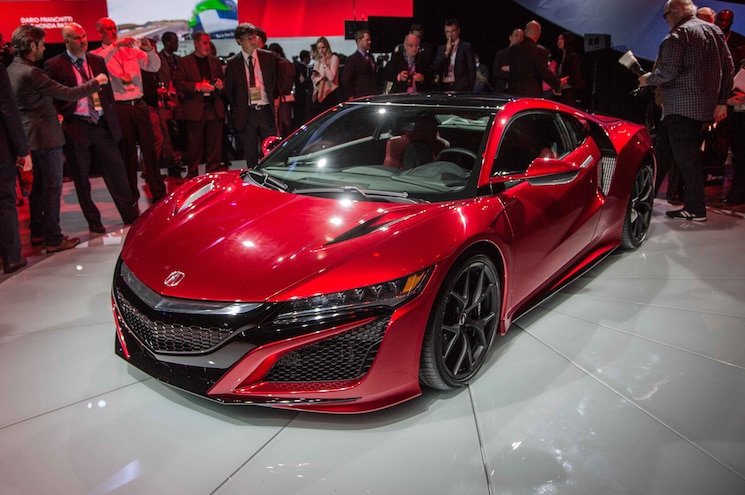 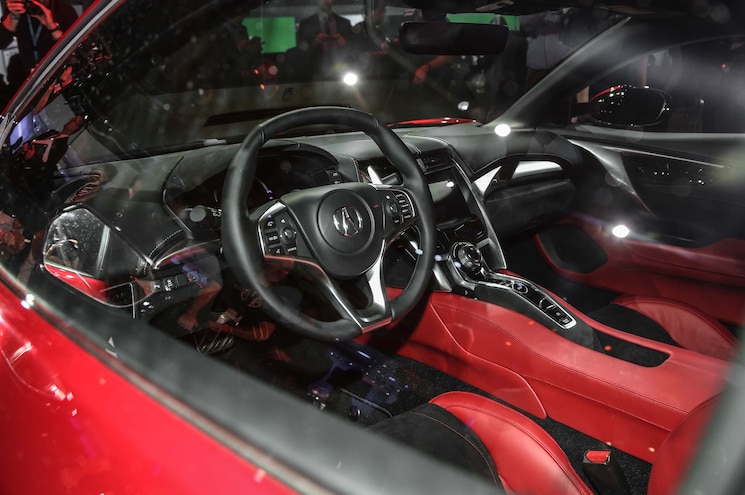 View Photo Gallery | 36 Photos
Photo 15/36   |   2016 Acura NSX Interior
Finally, in 2012 the world saw its first glimpse of the new NSX concept at the 2012 Detroit auto show. Purists were less than impressed, but the future of the car was clearly staked. The future of performance cars was already being laid out by the hybrid prototypes that would become the LaFerrari, McLaren P1, and Porsche 918. "At the Detroit show we launched a hybrid, and there was some consternation about that," Klaus says. "And then it was very interesting to see how rapidly and dynamically things evolved from that point.
"So then we move forward to 2013, and we strongly had our concept in place. Most important was styling, but also we have to lay out the components so that we can lower the center of gravity and bring the mass closer to the driver. We understood we could lay out the battery, the power electronics, the motors, and we could actually move the engine and improve the vehicle dynamics."
A final major adjustment was made, from a transversely mounted, naturally aspirated 60-degree V-6 to a longitudinally arranged, twin-turbocharged, dry-sumped 75-degree V-6. That engine was placed in an aluminum-intensive space frame with a carbon-fiber floor. "We looked at a carbon tub and various materials," Klaus says. "In the end we wanted to be able to evolve the design in the future. That was a big consideration." Two electric motors in the front along with one in the rear allow for torque vectoring and a significant amount of instantaneous torque to supplement the internal combustion engine's output.
Klaus is especially proud of the aluminum nodes that extend from the frame and form the suspension mounting points. These are created in a brand-new casting process (a world first, according to Acura) that combines strength, light weight, and a malleable nature that allows them to deform instead of cracking and breaking in a crash. Klaus expects this tech will trickle down to mainstream Acuras. 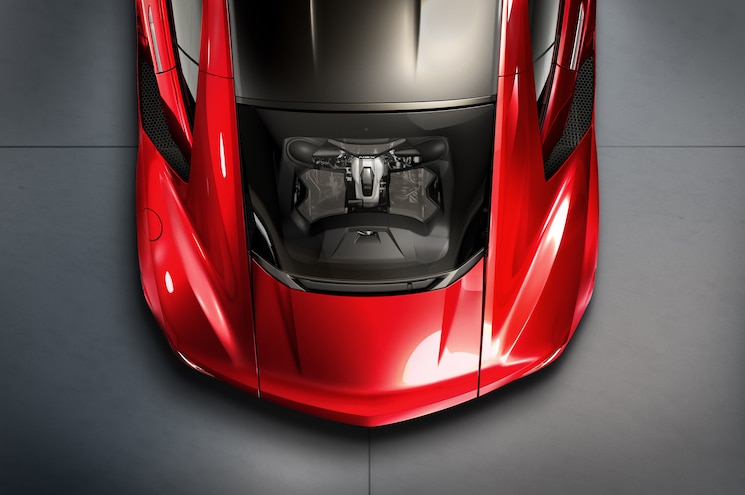 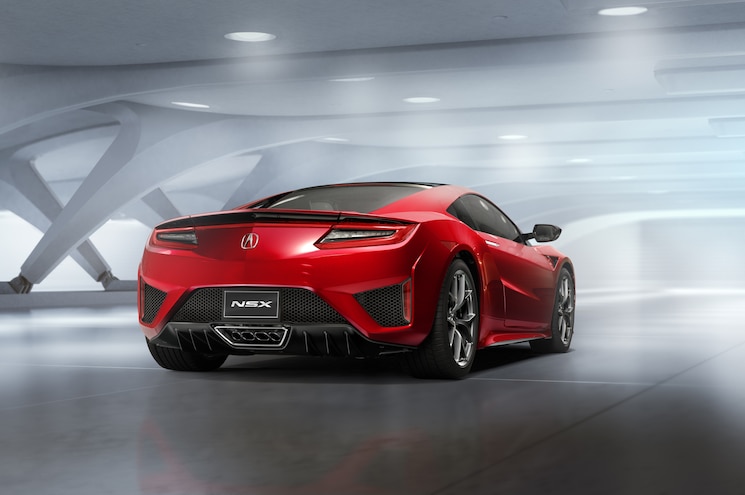 View Photo Gallery | 36 Photos
Photo 29/36   |   There’s no active aerodynamics on the new NSX, just well-thought-out fixed pieces. This diffuser works with the upturned rear deck lid to provide downforce on the rear of the car.
"Because of the powertrain and layout change, that was our pivotal moment from an exterior styling standpoint," says NSX exterior design project leader Michelle Christensen. "We wanted to keep the promise that Acura started with the show car.
"From the original show car, we added four new vents per side, and two of them became significantly larger. Most notable is the rear fender intakes, and design-wise it's my favorite part of the car. It's very exotic looking, which really elevates the car to a more prestigious level. We wanted to maintain authenticity, too. We didn't want anything on the NSX that was fluff or just extra garnish for the sake of looking cool. Every surface has been tuned to interact with the various cooling and aero components. All of them work together."

"“We didn’t want anything on the NSX that was fluff or just extra garnish for the sake of looking cool.”"

Christensen worked with the aerodynamics team in the wind tunnel to achieve enough downforce on the rear end with an upturned trailing edge and rear diffuser -- no active aerodynamics here. Airflow through the pass-through rear pillars above the fender vents contributes to this effect.
Although the original NSX featured all-aluminum bodywork, the new version uses a mix of aluminum doors, roof (carbon is still being investigated here), and engine lid with composite fenders to keep weight to a minimum. The wide taillight with upright ends is one of the few concessions made to carrying features over from the original car.
The aluminum-intensive suspension is fully independent at both ends, and Brembo carbon-ceramic brakes -- six-piston calipers fore and four-piston units aft -- are found all around. The staggered 19-/20-inch wheel setup is wrapped in Continental ContiSportContact 235/35ZR19 front and 295/30ZR20 rear. 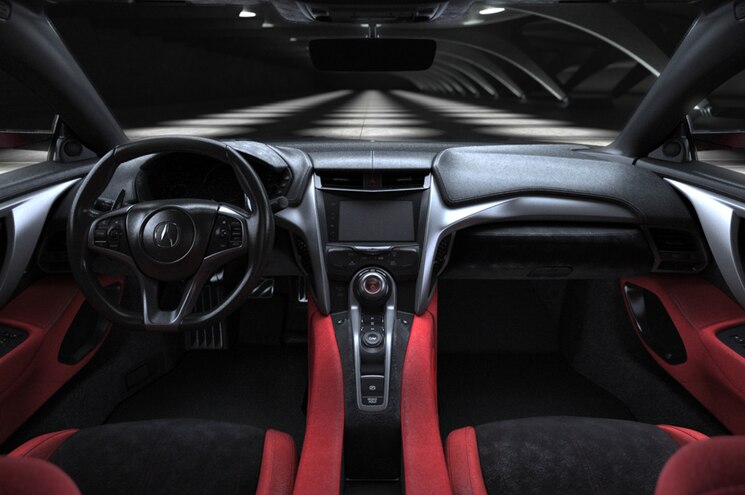 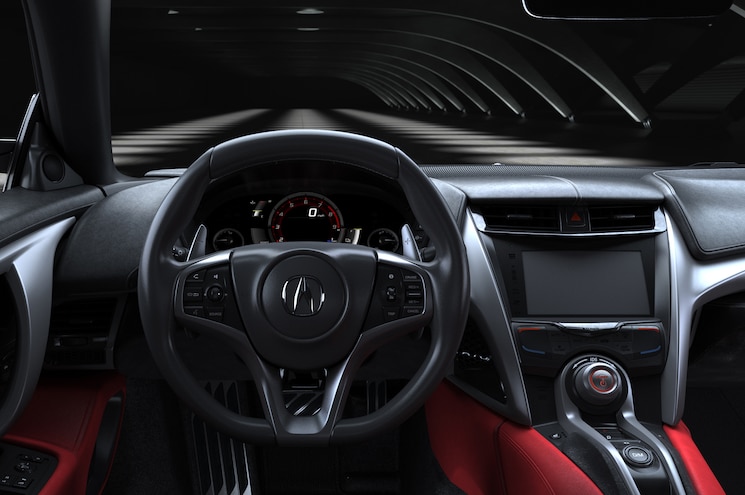 View Photo Gallery | 36 Photos
Photo 34/36   |   The NSX’s interior was designed to conform to—not constrain—the driver. Strong outward vision and ergonomics were key goals.
Much emphasis was placed on molding the NSX's cabin into a place where the driver immediately feels at home. To that end, interior design lead John Norman examined everything from the view through the windshield to the finer touch points.
"The original NSX revolutionized the packaging for the sports car industry," Norman says. "We had to make sure to keep that. We tried as hard as we could to keep the instrument panel low, to keep the cowl low. We worked on how to get the view out of the car as good as possible. We were able to shrink the A-pillars and still get airbags in them."
A central TFT display in the instrument panel is the focal point with just two actual analog gauges flanking the display on either side. A knob "large enough so it can be operated with gloved hands," Norman says, sits on the center stack and toggles between four Integrated Dynamics System driving behavior modes: Quiet (EV), Sport, Sport Plus, and Track. As the modes change, so does the layout of the central display, emphasizing various functions over others. The view through the windshield reveals a low hood with more prominent fenders to either side -- not unlike the original -- and excellent forward visibility.
The steering wheel is more square than round, with the primary hand positions at 3 and 9 o'clock. Chassis engineers are said to have integrated a quick enough rack that it's rare a driver's hands will have to deviate much from that position. External stitching at these areas is minimal to prevent chafing, and even the knee bracing points on the doors and center console are padded to prevent bruising. Thoughtful touches.
Significantly, not only was the NSX's development U.S.-based, but global production will also be based at Acura's new Performance Manufacturing Center in Marysville, Ohio. Acura will begin taking orders this summer at an estimated base price of $150,000. As for anticipated performance? Klaus says the car is a different animal than, say, a Ferrari 458 which, as he says, "is always on; it's hot and exotic 1,000 percent of the time." Think more of an Audi R8 V10 with an E-thrust element. We can't wait to find out. 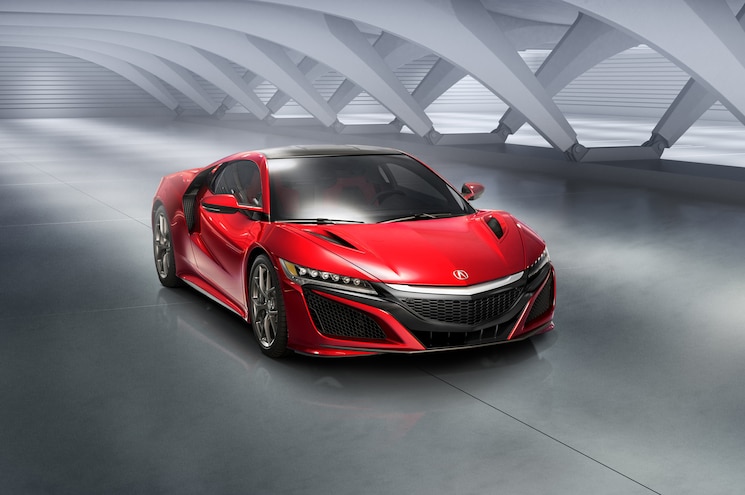 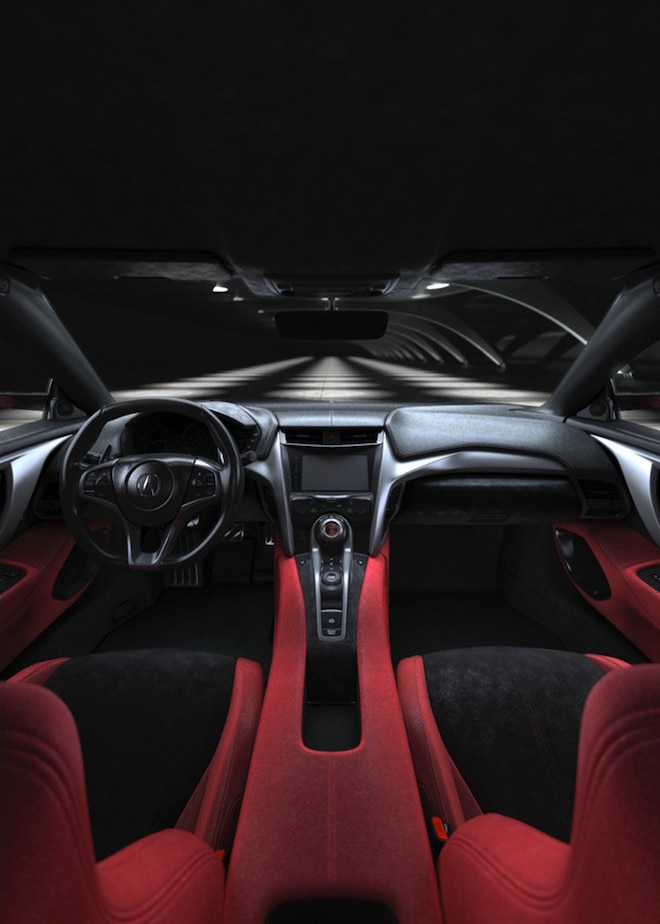