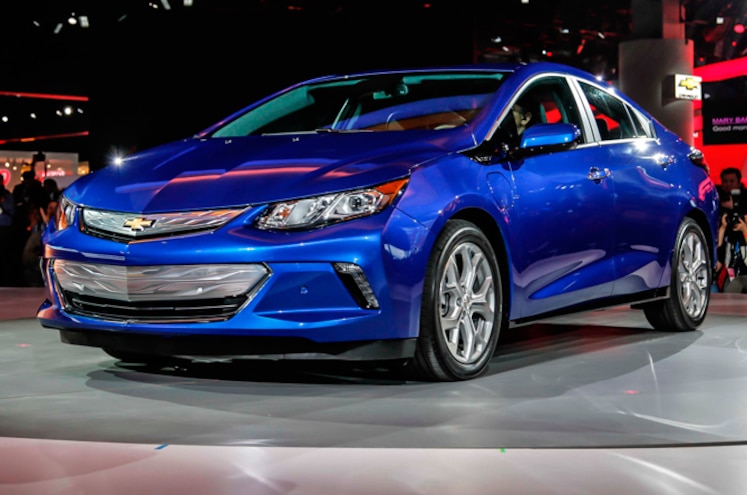 Some 73,000 of what marketing director Steve Majoros describes as "the happiest owners on Earth" have already racked up 650 million electric miles on their Chevy Volts, and the 2011 model currently ranks tops in class on J.D. Power's Dependability index. One might therefore expect a steady-as-she-goes evolutionary redesign for the 2016 Volt. But instead the Gen II Volt is far more radically redesigned than was the Gen II Prius. All-new styling looks sleeker and more sporting, and the entire drivetrain, power controller, battery, and virtually everything connecting the above has been re-engineered. (The only carryover powertrain part is a little yellow shipping cap used to cover the attachment point for the shift linkage -- and it gets thrown away at the factory). These new bits are getting bolted into sleeker-looking and more aerodynamic bodywork, too.
The second-gen Delta platform provides a 0.4-inch longer wheelbase. The body grows 3.3 inches longer and 0.8 inch wider, and the roofline drops 0.2 inch, but an aluminum hood and hatch plus additional use of high-strength steel help reduce weight. Aero considerations stretched the tail, just preserving the same 10.6 cubic feet of luggage space under the more swooping hatch. Interior dimensions are all identical, except for a 0.1-inch increase in rear legroom. A third rear seatbelt now allows someone to straddle the T-shaped battery pack for short trips. 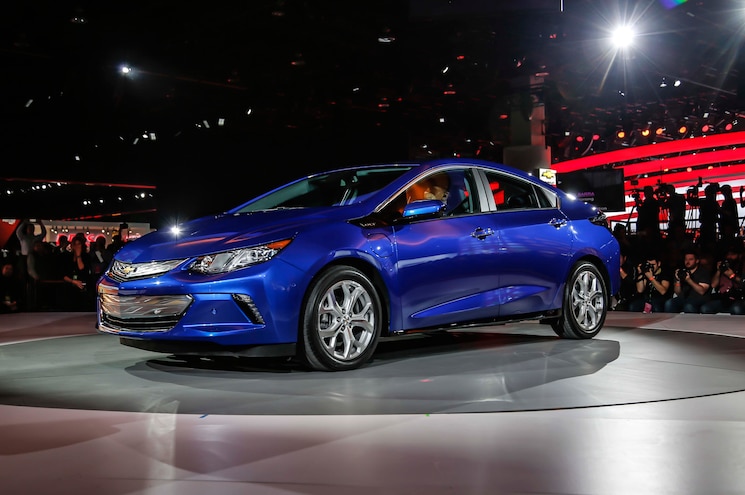 View Photo Gallery | 45 Photos
Photo 2/45   |   2016 Chevrolet Volt Front Three Quarters 02
The interior looks more upscale, featuring two-tone color schemes; larger, higher-resolution 8.0-inch instrument cluster and infotainment screens (both of which are reconfigurable for myriad eco-coaching displays); and optional heating for the steering wheel and rear seats. Ergonomics are improved by moving HVAC controls out of the touchscreen to dedicated buttons. But providing more content at similar pricing prompted some cost cutting, and most of the plastic is rock-hard.
The basic suspension setup carries over except for the addition of electric parking brake actuators to each rear caliper. We're also promised the transition from regenerative to hydraulic braking will feel less noticeable than before. New Michelin Energy Saver tires are slightly lower profile, too (215/50R17 down from 215/55R17).
Powertrain revisions are aimed at increasing performance and range at reduced cost. Despite the fact that most customers do their level dangdest to never fire the current iron-block 1.4-liter engine, it's replaced by an all-aluminum Atkinson-cycle 1.5-liter I-4 EcoTec engine featuring direct injection, 12.5:1 compression, and cooled exhaust-gas recirculation. This more powerful and torquier engine is refined enough to run at up to 5,600 rpm. (The old one was capped at 4,800 rpm for noise abatement.) Peak power output in the Volt's driving cycle is listed at 101 hp at 5,600 rpm. Torque is still not quoted, but it's listed as 104 lb-ft in other applications of this engine (up from the old one's 84 hp and guesstimated 92 lb-ft), and the engine now runs on regular gas. Oh, and it will be built in Flint, Michigan. 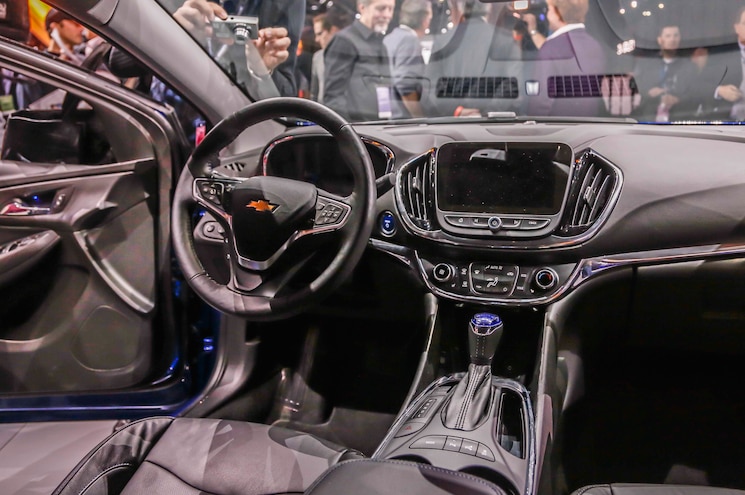 View Photo Gallery | 45 Photos
Photo 9/45   |   2016 Chevrolet Volt Interior
But the real kicker is the complete redesign of this transmission's guts. Instead of having one big honking electric machine propelling the car through a single planetary gearset, there are now two separate motors of slightly different designs with different peak operating ranges. This allows them to work alone or together depending on the driver's demands in different modes to better optimize efficiency. They combine to produce the same 149 hp with 21 lb-ft of additional twist (294 total). The smaller motor uses a ferrite material in lieu of pricey and scarce rare-earth metals, and the other one uses 60-percent less rare-earth metals than did the old single motor. There's 10-percent less steel in the two motors for a 33-pound weight savings.
Two planetary gearsets now manage five operating modes, up from four (as reflected by the transmission's official nomenclature, 5ET50, replacing 4ET50), though only four modes are driver selectable -- Normal, Sport, Mountain, and Hold. Mountain builds up some additional battery capacity in anticipation of a long grade, and Hold preserves the current battery state of charge to allow EV motoring later in a journey. 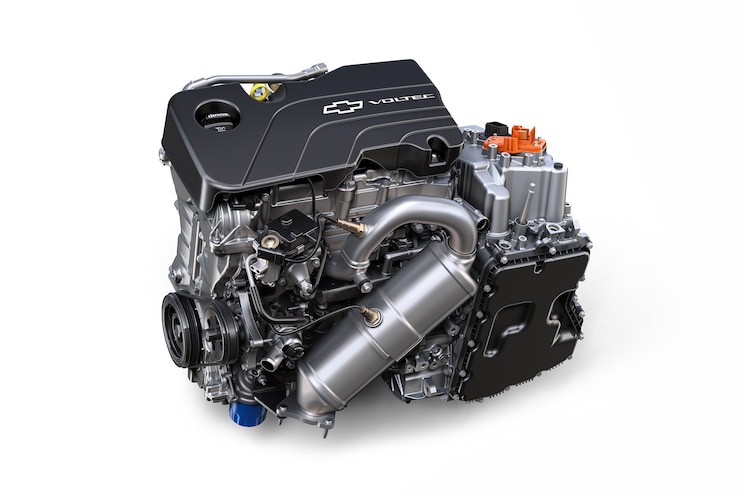 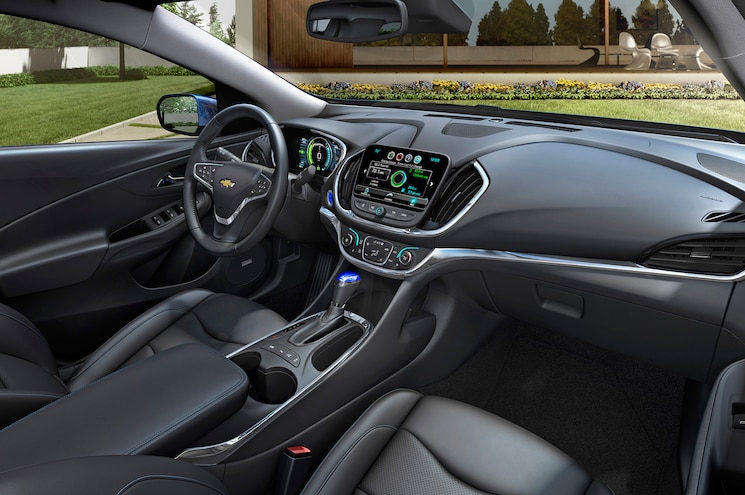 View Photo Gallery | 45 Photos
Photo 20/45   |   2016 Chevrolet Volt Interior
The battery shares only nine parts with its predecessor and still uses prismatic pouch-style cells and similar lithium-ion chemistry, but the various binders, separators, anode coatings, and such are altered, tipping the power/energy balance more toward the energy side. A total of 192 cells now do the work of 288, system efficiency is up 20 percent on a volume basis, and the normal operating range now utilizes more of the total battery capacity than even the Cadillac ELR's battery does (no percentages were offered), resulting in a total usable capacity of 18.4 kW-hrs (up from 17.1). That's good for a claimed EV range of 50 miles on the EPA city cycle, up from 38. Best of all, the pack weighs 30 pounds less, it has lower internal resistance, and its direct liquid cooling system is configured with about a third fewer seals (403 versus 602) for improved reliability.
Further packaging improvements and mass reductions are being achieved by integrating the traction power inverter module and controller electronics onto the housing for the electric motors and transmission. This eliminates the big orange cables that used to connect the body-mounted controller to the transmission. This change, combined with the nature of ever-shrinking microelectronics, brings a 60-percent volume reduction in the power electronics and helps the powertrain shed an impressive 100 pounds.
Altogether, this radical redesign of the 2016 Volt results in a weight savings of nearly 250 pounds, and Chevy claims it'll sprint to 60 mph a half-second quicker, in just 8.4 seconds. Of course jack-rabbiting around like that would only erode the 50-mile EV range and typical 1,000-mile commuting distance between fill-ups -- two bragging points that bring immeasurable joy to all drivers who've paid the hefty premium for a car that plugs in. 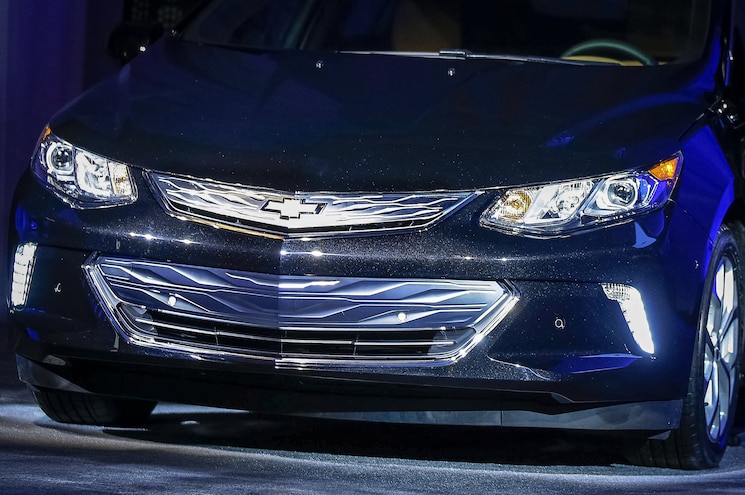