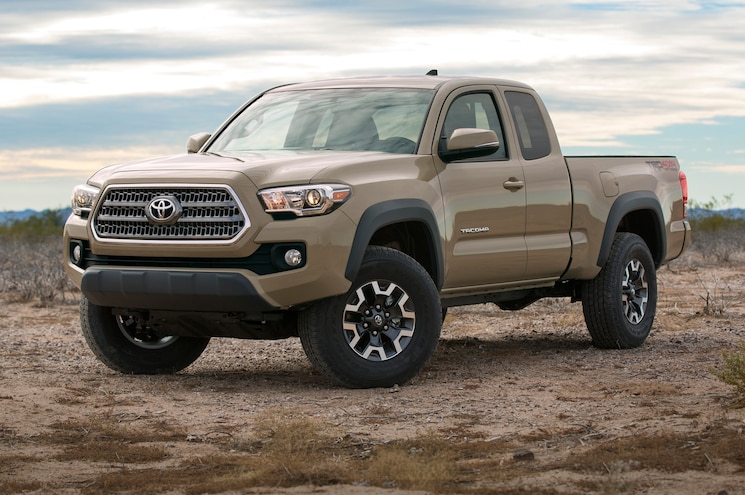 To put it gently, the current Toyota Tacoma is a bit long in the tooth. For years, it and the Nissan Frontier were the only trucks battling in the midsize segment, so without much competition, the Tacoma rested on its laurels.
That all changed with the introduction of the 2015 Chevrolet Colorado and GMC Canyon pickups. Those midsizers brought new comfort, power, and efficiency to the game, leapfrogging the contemporary Tacoma. However, with a new Tacoma for 2016, Toyota is seeking to reclaim the critics’ praise while continuing its streak as the bestselling midsize pickup. 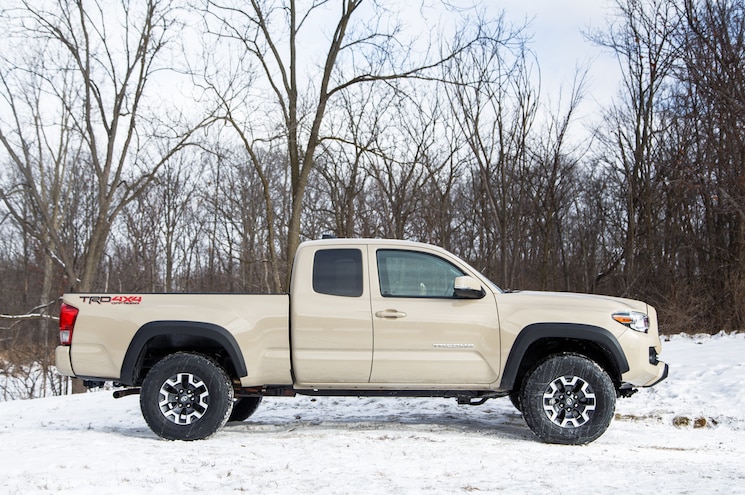 We first got a look at the new Taco last week and came away generally impressed with the truck’s appearance and styling. It gets off to a decent start up front, with an aggressive hexagonal grille treatment that establishes some family resemblance with the Tundra. Smaller headlights (with integrated air inlets) make space for a full-width lower grille opening that houses round foglights. With the air dam removed, the reshaped bumper also looks like it enables an impressive approach angle.
The side of the truck features very obvious resculpting. The fenders have been reshaped to bulge a bit more from the bodysides, and the asymmetrical wheel arches of the current Tacoma have been eliminated. Although we’re fairly sure the bodyshell between the A- and C-pillars is carryover from 2015, the door skins have a bit more surface detailing, helping the truck look fresh. The new bed is completely different from the current truck, featuring a cool carved-out tailgate with “TACOMA” script stamped into the sheetmetal. We admit, it’s a bit disappointing to see the cab stay the same, but if the truck works well as it is, then we won’t complain. 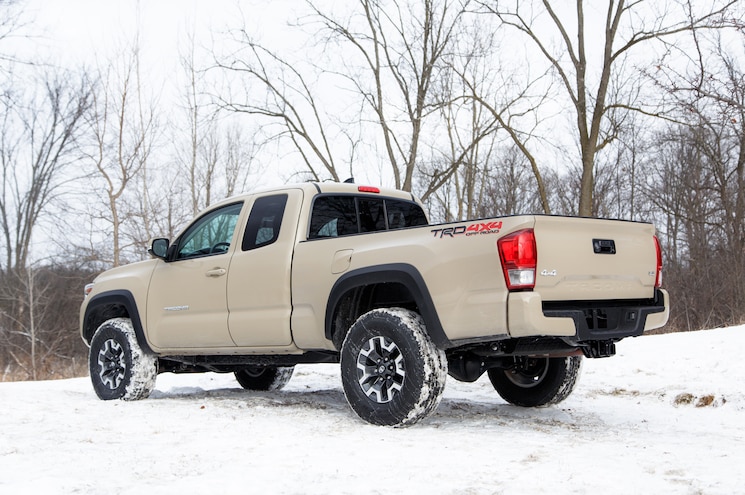 Many of the 2016 Tacoma’s updates appear under the sheetmetal. The frame has been enhanced with strategically placed high-strength steel. This will hopefully improve rigidity, as the current Tacoma’s backbone flexes noticeably more over rough roads than the Canyon or Colorado. The engineers at Toyota also incorporated ultra-high-strength steel into the new Tacoma’s body structure as well, using a new hot-stamping process the company says reduces weight. Toyota says that the suspension was fine-tuned for more on-road ride comfort while adding off-road capability. We can’t wait to test those claims.
Possibly the biggest technological advance of the new Tacoma is its drivetrain. The base engine is still a 2.7L I-4 (mated to a six-speed automatic transmission), but the aging 4.0L V-6 has been replaced with an Atkinson-cycle 3.5L V-6 that features both port and direct fuel injection. The so-named D4-S injection system helps prevent detonation and maintain the correct air-fuel mixture, while improving efficiency and power. The system has been used reliably on other Toyota models in the past, and while power output for either engine hasn’t been released yet, Toyota says the new engines will make the Tacoma more powerful and efficient than ever before. Enthusiasts will bow before the gods of the clutch pedal when they learn that the V-6 will be available with a six-speed manual in addition to a new six-speed automatic (replacing the current five-speed auto, like we predicted). 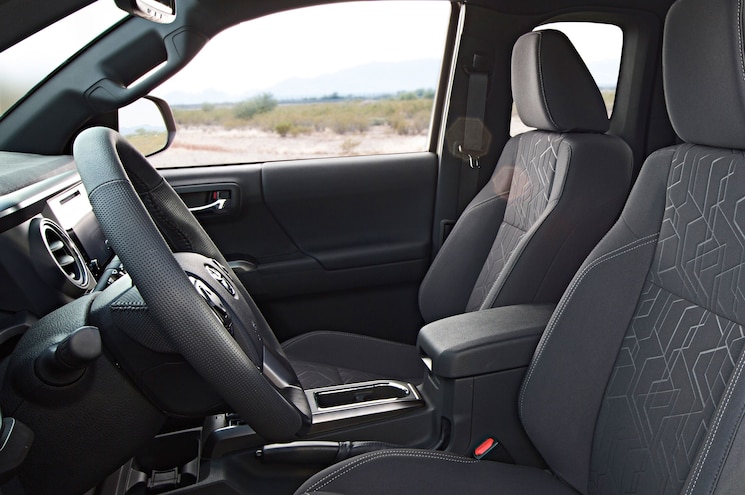 A New Interior: Is it Good Enough?

The outgoing Tacoma needed the most help on its dated interior; an issue that should be addressed with this generation. Toyota enhanced the cockpit of the 2016 with additional sound deadening in the headliner and floor, soft-touch interior plastics (including a padded dash and door panels), and available features like a blind-spot monitor, wireless inductive charging for mobile devices, dual-zone automatic climate control, and new touchscreen audio controls. From what we can tell, the dashboard looks to follow the same styling theme set out by other Toyota products. The floating infotainment screen calls the current 4Runner to mind, especially.
We hope to see the interior up close soon so that we can verify whether these changes are enough to make it competitive, but it all looks promising on paper. We also hope Toyota hasn’t alienated some of its fanbase by making the interior too soft, as it’s a challenging balance pleasing traditional truck buyers with rugged materials while still catering to those who want a gentler interior environment. 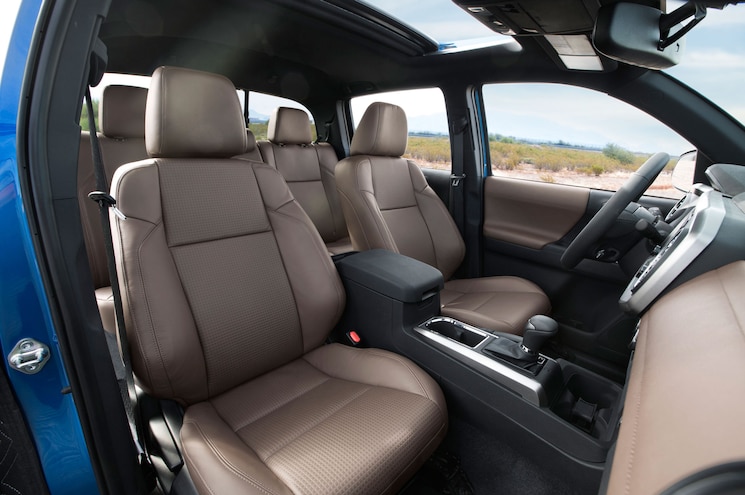 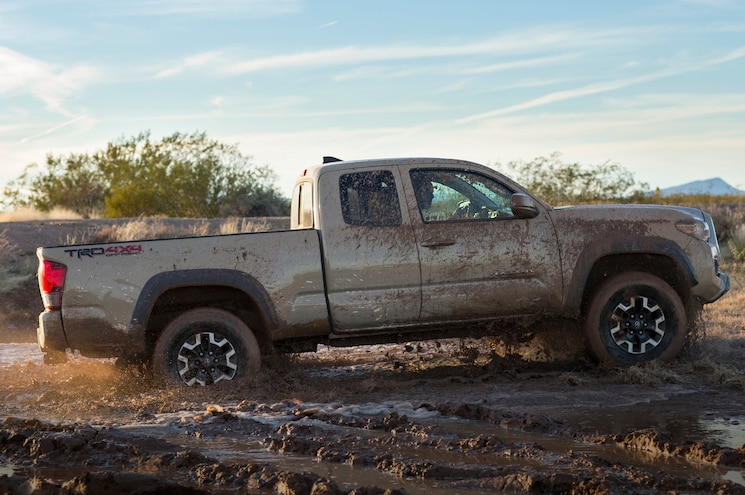 The Tacoma will be offered in five different trim levels: base SR, SR5, TRD Sport, TRD Off-Road, and top-line Limited. The blue Double Cab you see in these images is a Limited, while the tan Access Cab is a TRD Off-Road. We’re very attracted to the TRD’s large tires, mesh grille, and high-clearance front bumper.
That trim level comes prepared for the trail, with a limited-slip and locking rear differential, low-speed crawl control, and Toyota’s fun-to-use clutch start cancel. In addition, the TRD Off Road comes with Multi-Terrain Select, allowing the driver to choose from predefined settings for mud, sand, and loose rock. Once the correct mode has been engaged, Multi Terrain Select adjusts throttle and brake pressure to help maintain maximum traction. It’s the first time that kind of terrain-management system has been available on a midsize pickup, and it should only add to the truck’s reputation as one of the best available pickups for off-roading. 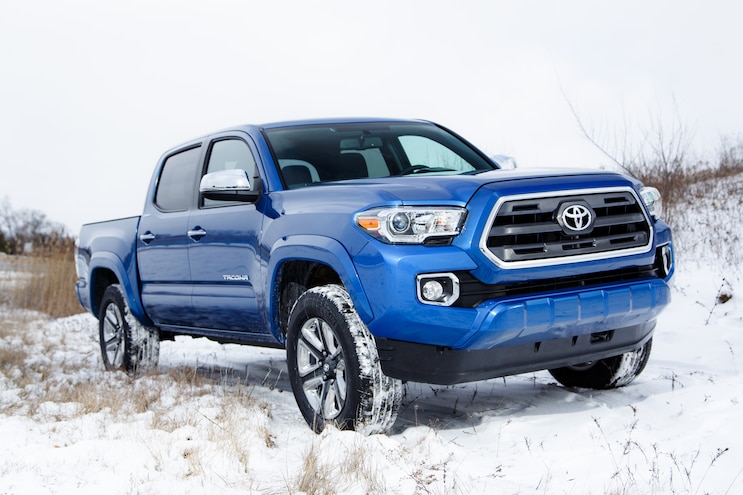 In spite of its empirical shortcomings, the current Tacoma’s low price, loyal enthusiast following, and traditional truck personality have helped it maintain strong sales. Through the last few months of 2014, it outsold the Colorado and Canyon combined, making the Tacoma the bestselling midsize truck for the year. However, as word of mouth gets out about the GM cousins (and their production capacity and dealer inventory increase), they no doubt will start putting the hurt on the Tacoma’s sales. Additionally, with a new midsize Nissan Frontier on the way within the next couple years, Toyota’s competition could be stronger than ever.
Even so, we think the new Tacoma’s significant mechanical updates, new styling, strengthened body and frame construction, and refined interior should help it find more than a few homes. We won’t go so far as to say that it’s better than its competitors without driving it first, but if the Tacoma keeps its unique personality while adding comfort and capability, then we think it’ll be a success.
Source: Toyota 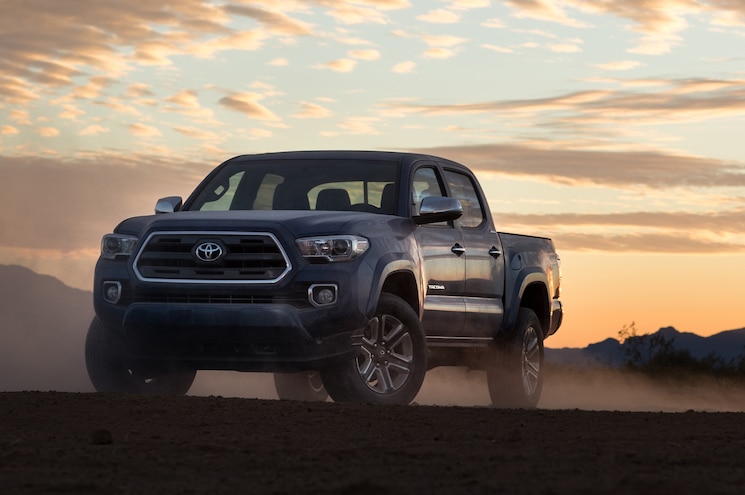 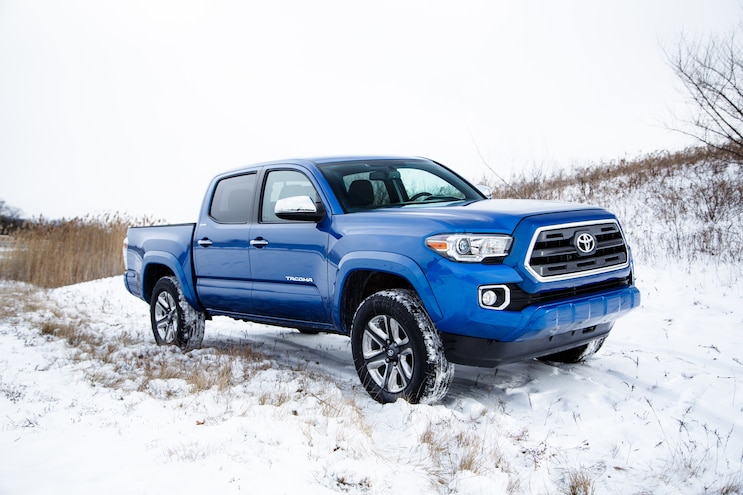