Which is the Better Engine for You? 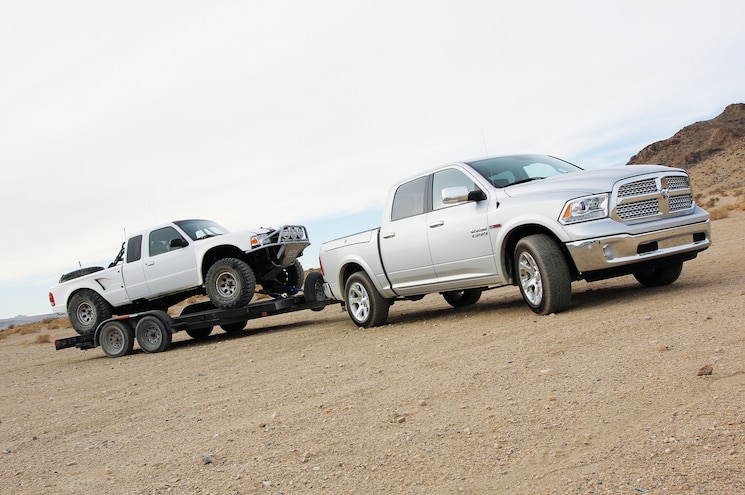 In the earlier days of fullsize trucks, the decision of which engine option to get was a pretty easy one. There was almost always an entry-level, low-cost six cylinder and one or two optional V-8s. Today, the options are a lot more varied, including turbocharged gas V-6s, and with the advent of the 2014 Ram 1500 EcoDiesel, the first light-duty diesel in the segment in more than two decades.
For many of you reading this, your mind is already made up. Some automatically gravitate to the traditional throaty rumble of a naturally aspirated V-8, and others instinctively go for the more economical option. We’re going to take a look at two of the Ram 1500’s engine options and shed a little more light on the relative merits and trade-offs of each. 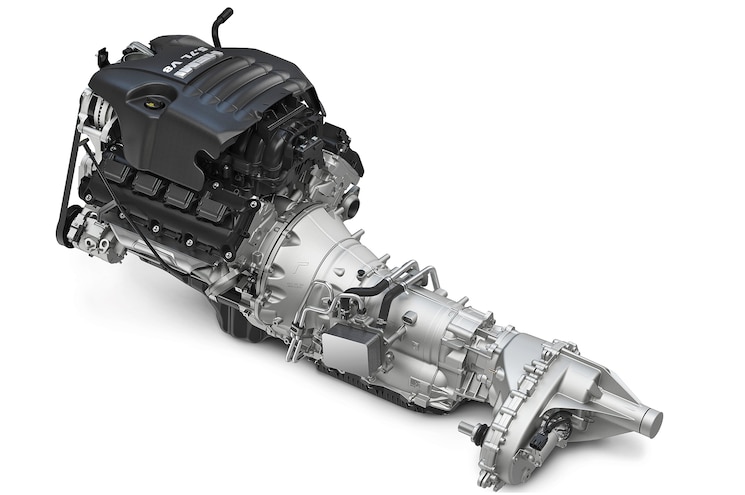 View Photo Gallery | 19 Photos
Photo 2/19   |   2013 Ram 1500 V8
Overall Power: Hemi
Yes, it’s true the EcoDiesel does put out 10 more lb-ft of torque than the 5.7L Hemi on paper, but the Hemi has a decisive edge in horsepower, with 155 more ponies than the Italian-built diesel. It also has a slightly higher maximum towing capacity at 10,400 pounds, a 1,200-pound edge. In our testing, it’s also been about 2 seconds quicker from 0 to 60 mph, as well as being quicker through the quarter-mile. And while you can feel the EcoDiesel’s torque, and yes, it is possible to chirp the tires, there’s no denying the Hemi’s advantage in outright speed. It will put the EcoDiesel on the trailer, no contest.
Noise, Vibration and Harshness: Draw
The differences in this category are more qualitative than quantitative. Both engines are reasonably civilized and smooth, although with the multitude of aftermarket exhaust options for the Hemi, it’s not hard to get one to speak loudly. Although there are some that are suckers for diesels’ gravelly groan, most ears will probably find the Hemi’s baritone burble much more aurally appealing. The EcoDiesel seems to be a little better-isolated in the Ram than in the Grand Cherokee, and from a quantitative noise standpoint, the EcoDiesel is probably marginally quieter at most speeds. This one largely comes down to personal taste. 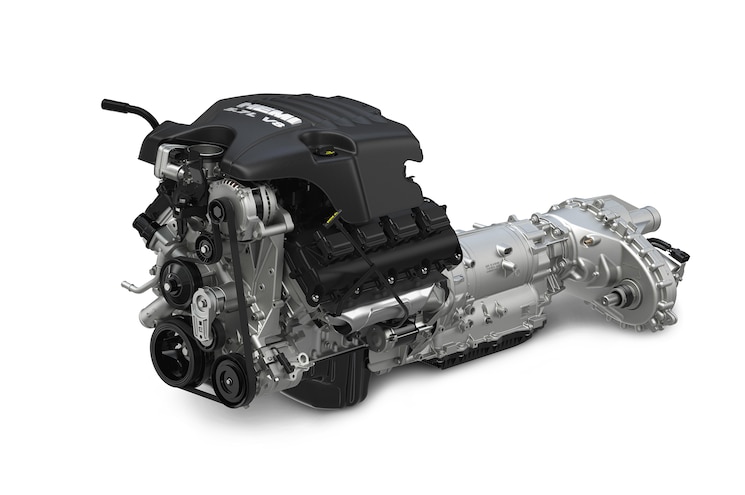 View Photo Gallery | 19 Photos
Photo 6/19   |   2015 Ram 1500 Hemi Engine
Economy: EcoDiesel
This is the one area where the EcoDiesel shows a considerable advantage over the Hemi. In two-wheel-drive form, the EcoDiesel has a decisive 5 mpg city and 6 mpg highway advantage and a 4 mpg city and 6 mpg advantage on four-wheel-drive models. That’s a big difference, and that difference gets even wider when towing, where diesels tend to be much more efficient than gas engines. In Motor Trend’s 2014 Truck of the Year test, in a week of pedal-to-the-metal testing, the EcoDiesel’s average MPG was in some cases double that of its gasoline V-8 counterparts at the test. If getting maximum MPG out of your truck is a priority, the EcoDiesel is the easy choice.
Maintenance and Cost of Operation: Draw
Traditionally, cost of operation and maintenance would solidly fall in diesel’s favor. However, there are more variables on today’s models that weren’t the case in decades past. The first wild variable is fuel prices. Depending on the region of the country, or even down to the neighborhood you’re in, diesel can be either cheaper than 87-octane unleaded or more expensive than premium. Diesel also tends to see a lot larger seasonal variations in price than gasoline.
In terms of engine maintenance, diesels have the advantage of not having spark plugs, but newer diesels almost all require urea DEF aftertreatment, a $10 to $20 cost approximately every oil-change interval to top off the reservoir. The EcoDiesel also has an oil capacity of 10.5 quarts compared to the Hemi’s 7 quarts, so plan on spending a little more on oil changes.
All diesel models currently sold in the U.S. are also turbocharged, an extra item that’s not a factor on the Hemi. Although today’s turbochargers are significantly more reliable than those nightmares in the 1980s that were as effective at burning oil as creating power, in the longer-term, it is a potential expense if you plan on keeping your truck for more than 150,000 miles. 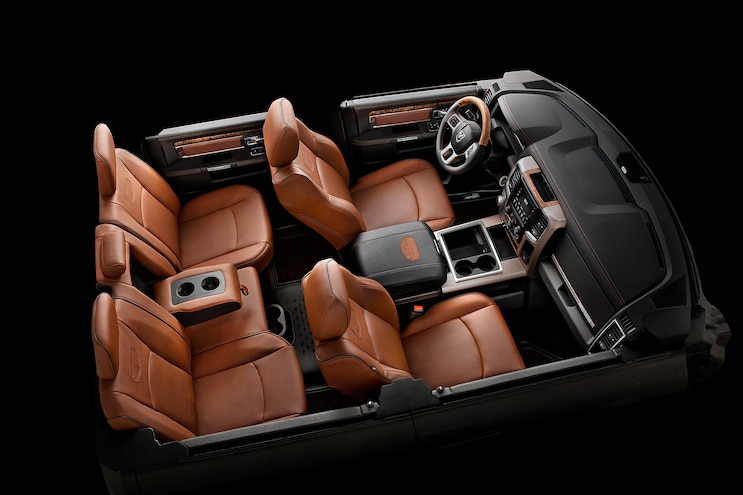 View Photo Gallery | 19 Photos
Photo 10/19   |   2013 Ram 1500 Interior Detail Above Full View
Towing and Hauling: EcoDiesel
Yes, we know what you gas fans are thinking: “What the hell! You say the Hemi has a higher towing capacity, but you pick the EcoDiesel as the better choice for towing?” Yes. Bear with us here. It’s true the Hemi has a higher overall tow rating than the EcoDiesel. However, when you factor in the performance variable between loaded and unloaded, as well as the economy difference, the EcoDiesel starts looking like the better choice. Although the Hemi is a perfectly acceptable tow companion, from the seat-of-the-pants view, it feels like there’s less degradation of performance when towing or hauling with the EcoDiesel than with the Hemi. The EcoDiesel feels happy hauling a load, whereas the Hemi is happier hauling ass. And as noted earlier, the diesel’s efficiency margin widens under load, making your likely towing mpg significantly higher than that of the gasoline powered truck.
Frankly, if you regularly tow more than 6,000 or 7,000 pounds, or haul a payload more than 2,000 pounds on a routine basis, you’re probably better off with a 3/4 or 1-ton truck. Yes, on-paper, 1/2-tons can handle loads this heavy, but it’s much less of a burden on the larger models and gives you a lot more wiggle room if you find yourself having to tow or haul heavier loads. 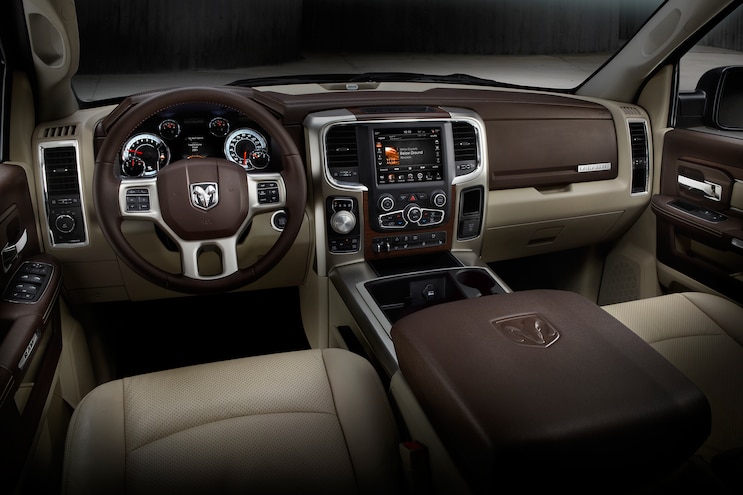 View Photo Gallery | 19 Photos
Photo 11/19   |   2013 Ram 1500 Dash Drivers Side View
Verdict: Something for Everyone
So which truck is best for you? You’re going to have to make that decision for yourself. Both the Hemi and the EcoDiesel are great engine options but have distinctly different personalities. The Hemi is the red-blooded, all-American choice, with robust, confident V-8 power and sound and is fully capable of truck duty. The EcoDiesel has an almost foreign sound in the Ram, with steady, confident, but not overwhelming, power and acceleration. Its reward is outstanding fuel economy in both real-world driving, as well as towing or hauling. Considering the $8,000-plus price premium the HD diesel powertrains carry over their gasoline counterparts, the EcoDiesel’s $2,850 premium over the Hemi looks like a relative bargain. Whether you like traditional V-8 power and sound or modern-day diesel efficiency, the Ram 1500 offers an excellent engine for either preference.
Break Even Point: 142,600 miles
Based on AAA’s current national fuel price averages of $3.43 per gallon of gasoline and $3.80 per gallon of diesel. Ram 1500 Hemi V-8 has an average EPA fuel economy of 18 mpg combined, and the Ram 1500 EcoDiesel V-6 has an average EPA fuel economy of 23 mpg combined. 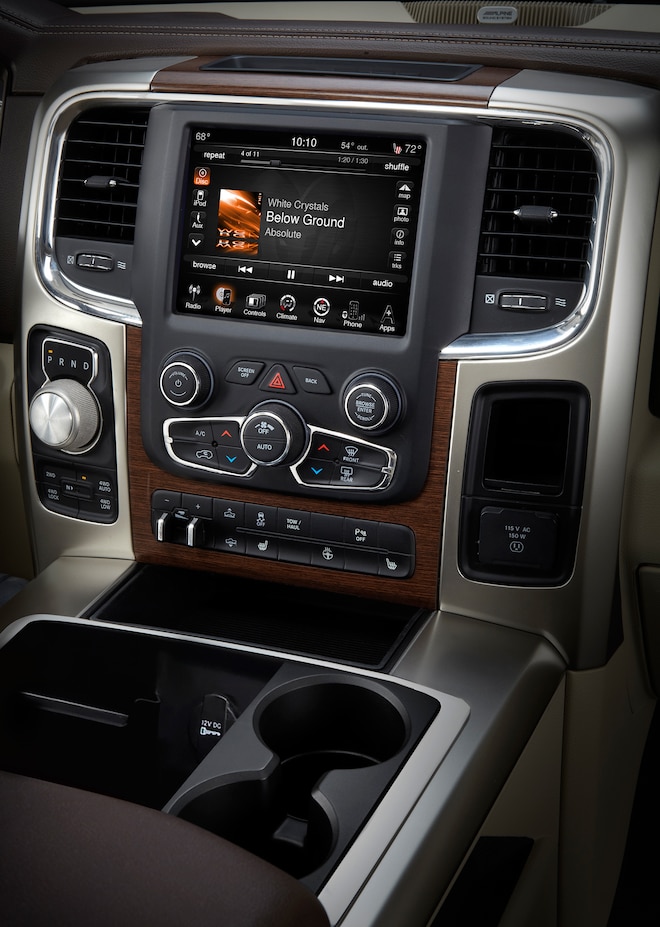 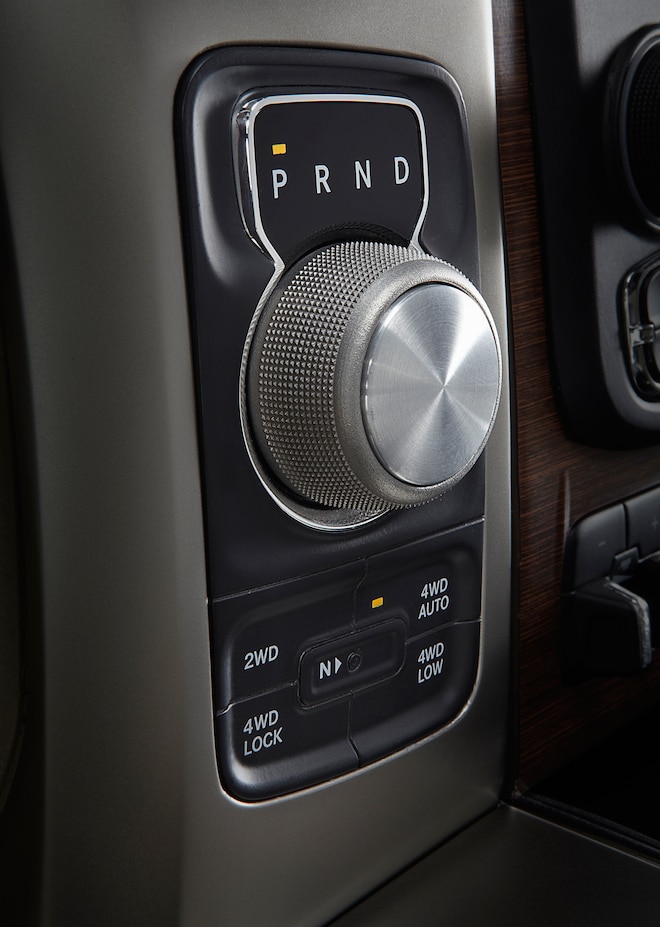