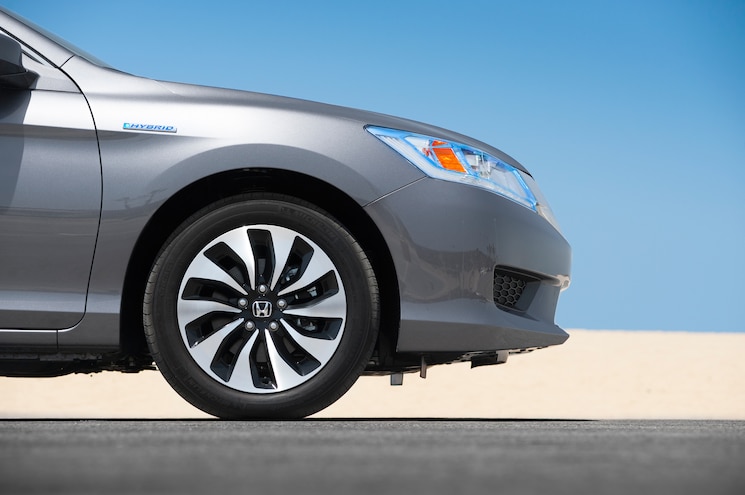 Since our last installment, I've learned and confirmed a couple qualities about the Honda Accord Hybrid.
Predictably, fuel economy suffers in colder weather when the heater is pressed into service. Unlike the car's electric air-conditioning, the heater can't rely on battery energy to warm up the car's occupants. Instead, the heat source is -- you guessed it -- the engine. And with a powertrain that earns its keep by being able to turn off the emissions maker while driving, fuel consumption increases if the engine can't lie dormant. Instead of 40-60 mpg on my commute (the 20-mpg spread is almost entirely traffic-dependent), 30-35 becomes the norm. Lest we forget, Real MPG is 46.8/41.6/44.3 mpg city/highway/combined. 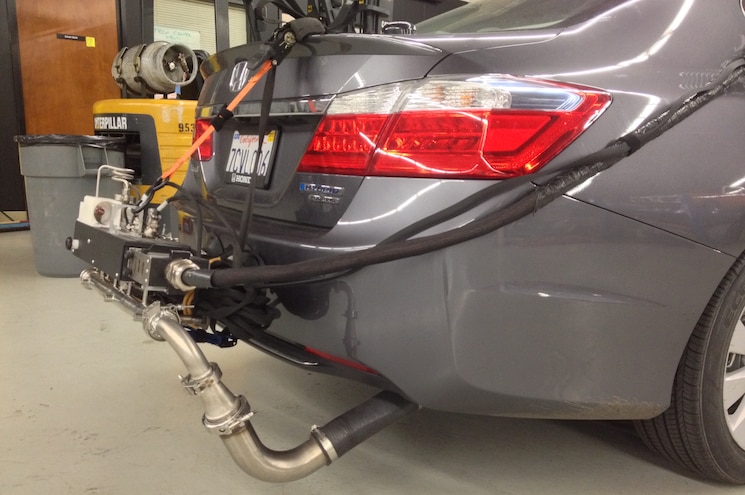 View Photo Gallery | 14 Photos
Photo 2/14   |   This is part of Emissions Analytics' kit (the exhaust stream is fully contained) that allows me to obsess over fuel economy.
More surprising was the aggressive driving penalty bestowed on the car. Although it's generally accepted that gas-electric hybrids are more susceptible to wide fuel-economy swings (note the variance in my commuting above), our Real MPG test has determined the Accord is minimally penalized by bouts of aggression. At least, it's minimal when compared to other vehicles we've tested. Excavated from the test, the aggression penalty studies the change in CO2 emissions with severer-than-average acceleration rates. The Toyota Prius, the most common hybrid in the world, earned an average penalty.
How, what, when, why? As each mile per gallon carries more sway on thirstier vehicles -- 3 mpg difference on a 40-mpg car is worth 7.5 percent; it's 12 percent for a 25-mpg vehicle -- the Emissions Analytics equipment needs to inhale more carbon dioxide burped out of the car to warrant a greater penalty. Of course, the fuel economy could nosedive if I floored it everywhere, though that's realistically not the way an "average" Accord Hybrid customer drives. Unless … 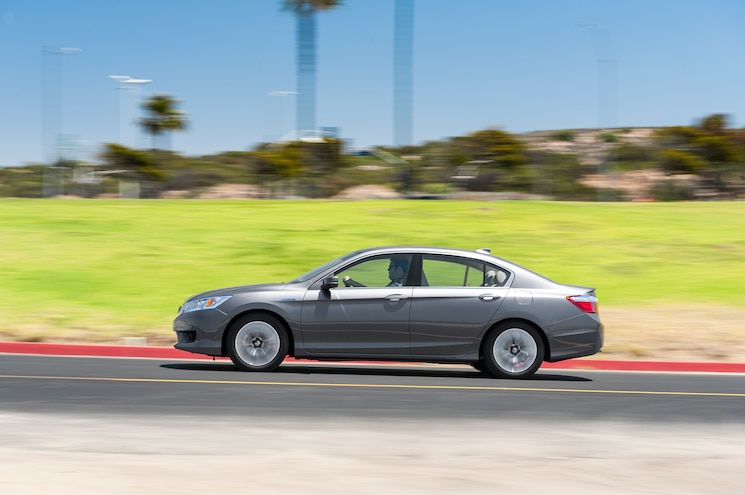 View Photo Gallery | 14 Photos
Photo 3/14   |   2014 Honda Accord Hybrid Touring Side In Motion
To see what would happen under my watchful eyes, I let the missus take the wheel for a few trips around town. The trips varied in distance (as short as 3 miles and as long as 30), but traffic moved quickly. Perfect. The missus self-describes her driving style as "aggressive" and "impatient," yet (somehow) "safe." Anyway, after seven different drives on a nice, cool day and the stomaching of uncountable gas and brake pedal stabbings and herky-jerky steering motions, the onboard trip mpg readout spit out a low of 37.0 and a high of 43.7. Not bad, right? I think I could have improved each of the seven results, knowing my less, err, demonstrative driving style. But probably not by much more than 10 percent, because it's the very short trips that are most challenging to achieve exceptional fuel economy. Unless you're willing to tiptoe along much slower than the flow of traffic -- then we could get 60 mpg all day long.
When the missus isn't trying to take me out for thrill rides, I've continued finding the Accord Hybrid a pleasure to drive. Its acceleration response is much better than the standard Accord's, and the highway ride (the car spends a lot of time on the highway) is more relaxed, too. But it's not as lazy-riding as a Camry. Thank goodness.
More on our long-term 2014 Honda Accord Hybrid Touring: