Rainbow Warrior: It's Time to Stop Mourning the 6.2's Demise 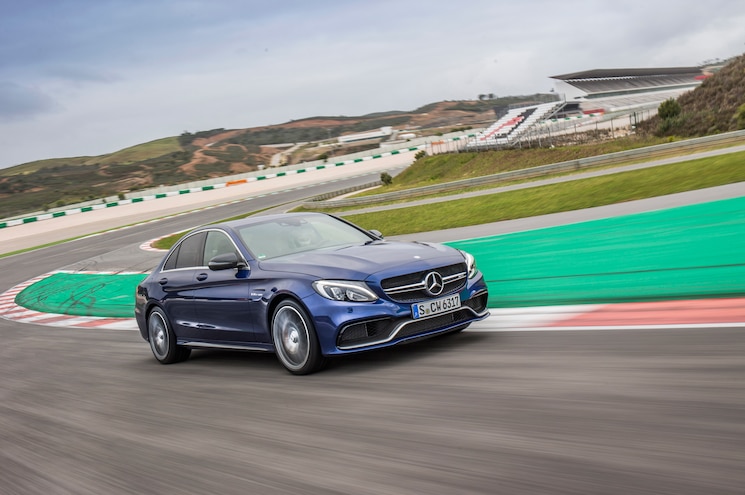 The recent death of AMG's legendary, big-lunged, free-breathing 6.2 liter V-8 has inspired its own "black series" of epitaphs and obituaries marking the end of an era. Road tests of the final round of Edition 507 and Black Series models heaped praise on that M156 engine's linear power delivery and free-revving nature, implying that such virtues might not be shared by its smaller-displacement successor and that turbos would inevitably stifle the new engine's song. Well it's time to doff those widow's weeds and lighten up. Regard this new Mercedes-AMG C63 like the rainbow in Genesis -- a sign of the horsepower gods' covenant that no flood of CO2 regs, CAFE standards, or guzzler taxes shall ever smite mankind's quest for linear torque delivery, ever-improving lap times, and soul-stirring sounds.
This new direct-injected, 4.0-liter, "hot-vee" twin-turbo V-8, code numbered M177, is a wet-sump riff on the dry-sump M178 that will power the new Mercedes-AMG GT and GT S. Like the M156, it was completely designed and developed in Affalterbach (unlike the E63's 5.5-liter twin-turbo, which began life on a Mercedes-Benz drawing board in Stuttgart), and each one is assembled and autographed by a single technician there. The block is smaller and just enough lighter to offset the added weight of the turbos and charge cooler so that a fully dressed M177 weighs about what an M156 did. And as another tenuous hook to that headline, the M177 kind of shares the Rainbow Warrior Greenpeace ship's mission of radical environmentalism, in that it aims to deliver even more fearsome power while greatly reducing CO2 emissions. Indeed, AMG promises this will be the most efficiently performing V-8 money can buy, with consumption said to drop by 32 percent on the easy-breezy Euro NEDC fuel economy test (EPA results are pending) and claimed 0-60 time improved by a tenth. 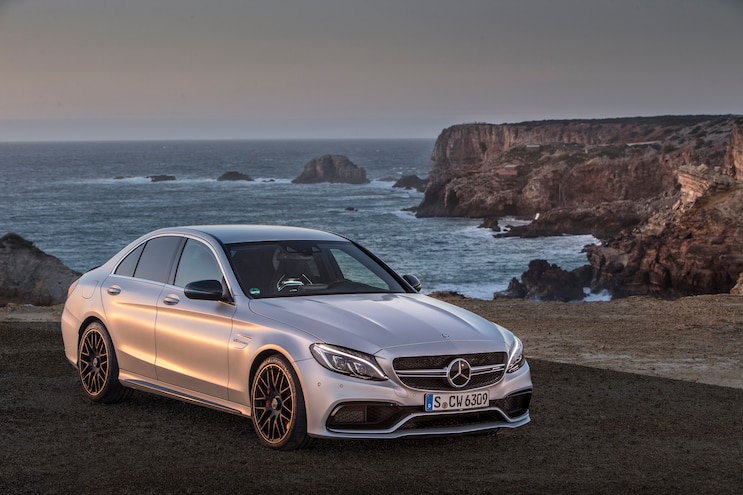 View Photo Gallery | 180 Photos
Photo 2/180   |   2015 Mercedes AMG C63 S Front Three Quarter Static 03
As in the GT, the engine will be offered in two states of tune. Base C63s develop 16.0 psi of boost to produce a peak of 469 hp at 5,500 rpm and 479 lb-ft of torque from 1,750-4,500 rpm. The S model huffs up 17.4 psi of boost, which elevates the peak output figures to 503 hp and 516 lb-ft at the same rpm ranges. Alas, the redline drops by 1,000 rpm to 7,000, but the new engine feels no less eager to reach it.
A huge amount of effort went into crafting an exhaust system that would coax a stirring note out of what remains of the engine's roar after the turbos are done with it. Three valves work magic. One connects the left and right pipes way up near the engine, and it stays open in Comfort mode to send eight cylinders' worth of soothing fourth-order burble down both pipes. In Bad-Boy mode this one closes to send a CLA45-like snarl down each pipe while the other two valves open to short-circuit the rearmost mufflers. (These two open even in Comfort mode when engine speed exceeds 5,500 rpm to relieve back pressure.) Finally, the fuel system contributes just enough juice to produce lovely crackles and pops on overrun. It will even produce a dramatic growl upon startup, just like the M156 did. 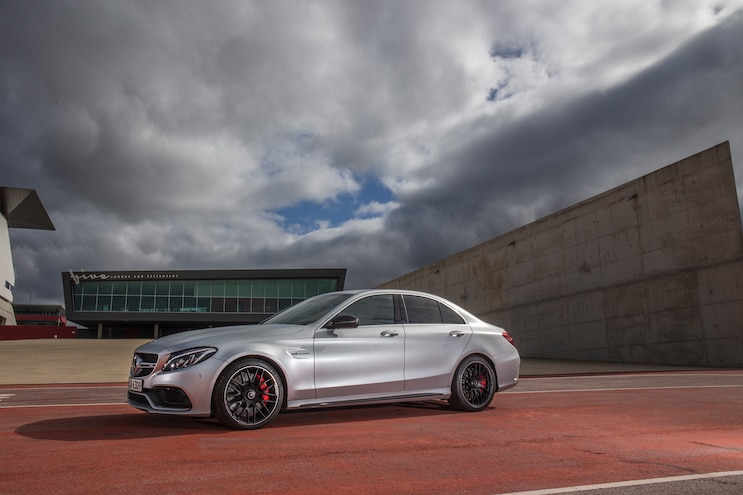 View Photo Gallery | 180 Photos
Photo 9/180   |   2015 Mercedes AMG C63 S Side Profile
This epic thrust is routed aft through AMG's Speedshift MCT seven-speed automatic, as the GT's twin-clutch transaxle could not be packaged in this sedan. There's no torque converter, and locking the launch clutch makes shifts feel as quick and crisp as those of the twin-clutch when driving in the sportier Dynamic Select modes. Conversely, slipping this clutch smooths shifts when in Comfort mode. 4Matic all-wheel drive will not be offered, but a limited-slip differential helps make the most of the available grip, and S models get electronic control to further enhance handling and differentiate the Dynamic Select modes. Between the added power, suspension mods, and E-Diff, AMG says to expect lap times about a second faster on a 1-minute-plus track such as Hockenheim.
As before, the suspension is completely unique to AMG, wider front and rear, and adjustable to Comfort, Sport, Sport+, and (in S models) Race mode, with three levels of damping stiffness individually selectable within the aforementioned modes — ideal for adding compliance on a rough track, for example. Tire and brake sizes ratchet up from base to S models, with staggered-width 18s on the base, 19s on the S, and carbon-ceramic front rotors optional on the S. 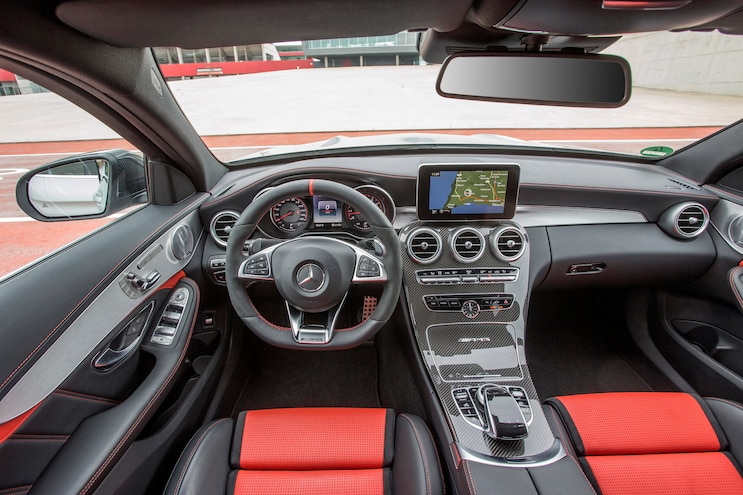 View Photo Gallery | 180 Photos
Photo 10/180   |   2015 Mercedes AMG C63 S Interior View
To fully demonstrate the capabilities of the new C63 S, AMG opened the launch with lapping sessions on the new-in-2008 2.9-mile Autodromo Internacional do Algarve in Portimao, Portugal. The recommended setup was Race mode, with ESP Sport Handling mode engaged and the damping set to its middle setting for greater compliance on with the many bumpy apex curbs. My first session was a lead/follow with five-time DTM champ Bernd Schneider leading and three journos struggling to build confidence in the car's ability to match his blistering pace. I chickened out in the first few turns, braking too early and too hard, only to discover that with all this extra torque on tap, haste in returning to full throttle while trying to close the gap easily caused the rear to break traction, resulting in further time-consuming (but smile-inducing) powerslides.
Soon it became clear that these steel stoppers never disappoint and that (miraculously) this electrified steering rack was communicating all I needed to know about how hard the front end was biting into the turns via the thick-rimmed, flat-bottom steering wheel. The sport seat held me firmly enough to feel at one with the car, and the sharp new color graphics on the AMG-designed head-up display informed me of speed and redline proximity without taking my eyes off the braking-zone cones. The old C63 had softer springs and taller bump-stops that provided a progressive spring rate change in hard cornering. This one features stiffer springs and shorter bump stops, resulting in slightly more linear and predictable behavior in the tightest corners. 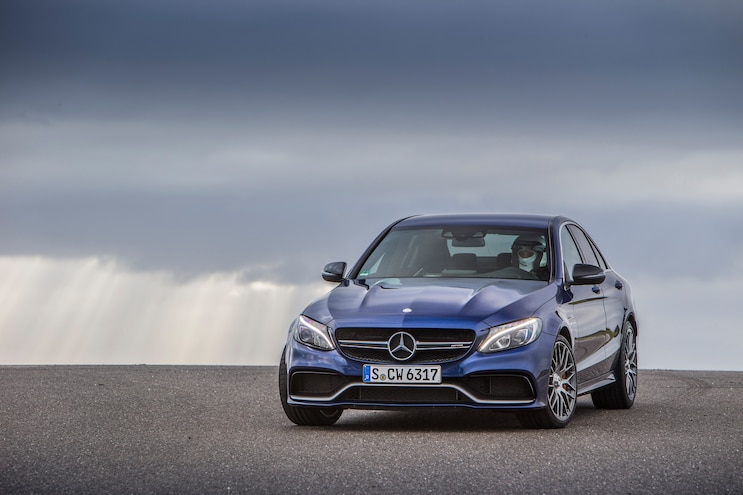 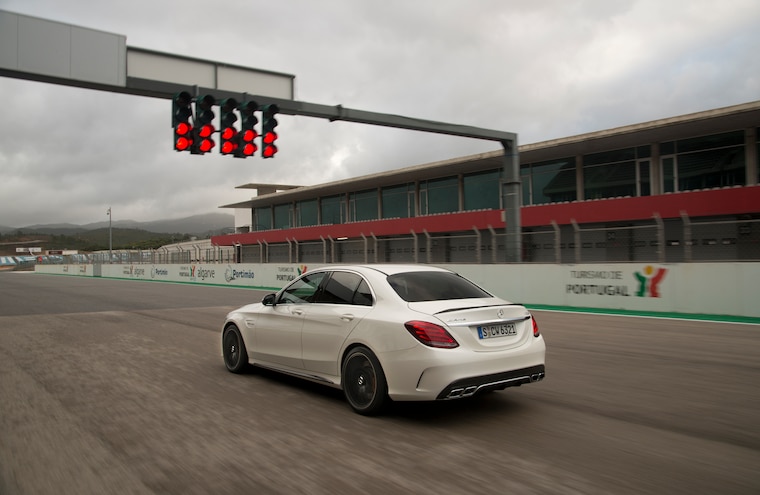 View Photo Gallery | 180 Photos
Photo 27/180   |   LAUNCH CONTROLA Race Start function can be enabled by first dialing up Sport, Sport+, or Race mode, setting the transmission to manual mode, and the ESP to Sport Handling. Then, from a stop with one foot on the brake, you tug both shift paddles, prompting a message in the instrument cluster. Acknowledge Race Start by pulling the upshift paddle, floor the accelerator, the engine revs to about 3,500 rpm, release the brake, and off you go with a modest amount of wheelspin.
Before departing the track, I strapped in with Herr Schneider (with no journos in tow) to witness the car's full potential. Naturally, he ran with all nannies off in the middle damping setting and seemed to carry 20 or 30 mph more speed than I had through every corner while seldom provoking perceptible wheelspin, thanks to his supernatural ability to constantly sense and account for the available grip even more efficiently than a stability control system can.
I left the track in a base C63 and was struck by how civilized the ride quality remains, even with the stiffer springs. The tire noise on various surfaces borders on deafening at highway speeds, but the exhaust seems just right -- quiet enough in Comfort mode (drowned out as it is by the Michelin Pilots), super engaging in Sport+ mode. Smart money says the S will outsell the base, and indeed if I were faced with the choice, the (as yet unknown but presumed to be $10,000) upcharge would probably seem worth it for the E-Diff, better brakes, 180-mph speed-limiter (155 is standard), Race mode programming, and minor interior and exterior styling spiffs (especially the Dynamica suede accented sport steering wheel). 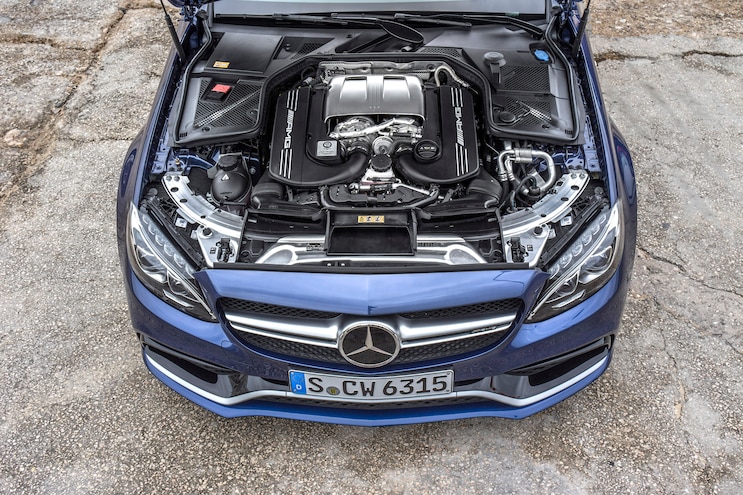 View Photo Gallery | 180 Photos
Photo 28/180   |   Powertrain development director Christian Enderle says 900 Nm (664 lb-ft) is the absolute limit of this engine with these turbos (leaving an open question as to what the block could withstand with bigger turbos). So we reckon that when the new starts to wear off of the C63 and C63 S, we can expect a Black Series to arrive, producing perhaps upward of 700 hp and 650 lb-ft, and chassis integration chief Markus Hofbauer says there's bandwidth for increased chassis performance to keep up.
Is it OK to mourn the M156 C63 AMG? Sure. That engine in that car made for big, hairy, loud, stupid fun. But trust me. A strong dose of smaller, blown, loud, stupid M177 fun (plus faster lap times and hopefully a lighter fuel bill) should dry those crocodile tears right up. 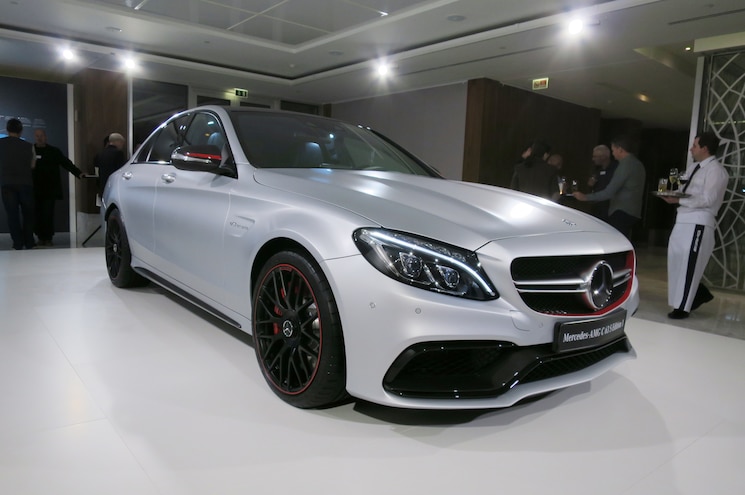 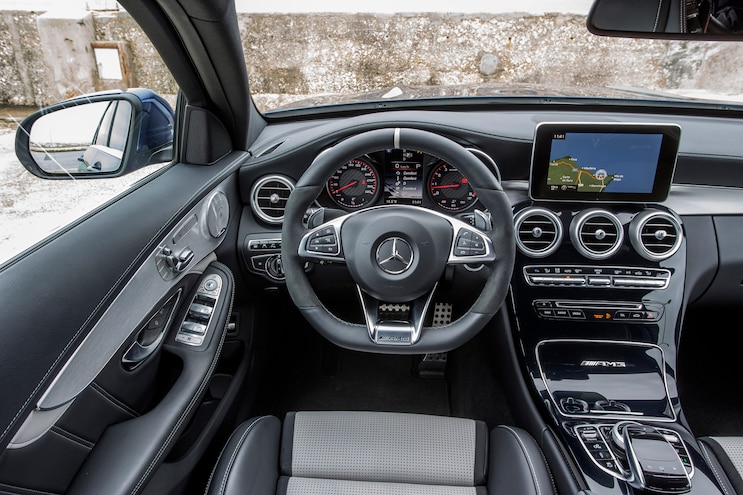