For those who think a Porsche 911 S just isn't quite enough and the Porsche 911 GT3 is just a bit too much, fear not. Porsche has filled that void with the Porsche 911 Carrera GTS. The GT3 is simply in a different league than its two siblings, so I want to focus on the differences and similarities between the S and GTS.
The loftier starting price for the GTS gets you numerous things standard, such as the 430-hp version of Porsche's 3.8-liter flat-six engine, PASM adaptive damper system, Sport Chrono package, Sport Exhaust, and 20-inch wheels. Again, all this comes standard on the GTS, but it's still available on a non-GTS 911 -- for an additional price, of course. There are also a few things you can't even chose as an option, such as the standard wide-body kit on all GTS variants, which you can only get on a C4S. Then there are the black accents, which include the headlights, trim stripes, exhaust tailpipes, and GTS badges. They actually look very good. Also, if you want the 30 extra ponies in your non-GTS (a $17,000 option), you can only get Porsche's PDK transmission; with the GTS you can get either the seven-speed manual or the PDK. View Photo Gallery | 38 Photos
Photo 2/38   |   2015 Porsche 911 Carrera GTS Models
I wish I could tell you I was able to sample an S and GTS back to back during our track day, but we weren't afforded that opportunity. As expected, the GTS felt great, but it would have been nice to see just how different (or similar) these two really were around a track. One thing that was immediately noticeable on the GTS was the shifter in the manual gearbox. Porsches have always had very good shifters but have tended to be notchy and require decent effort to switch between cogs. But the shifter in the GTS is probably the best I have ever felt in a Porsche. It's not notchy at all and moves between the gears with almost no effort while maintaining a solid feel.
Luckily, our day wasn't spent entirely at the track. Although I always like more track time, our drive to the track was just as enjoyable. Porsche laid out a fantastic route from Pasadena, California, to Willow Springs Raceway via Angeles Crest Highway. For those of you who haven't had the opportunity to run the Crest, it's a must. It has everything you could ask of a road, and the GTS felt right at home. The fact that I was in a Cabriolet just added to the experience. Front-end feel is superb; the GTS has a perfect balance of power and capability. And the sound, the crackling exhaust bouncing off the canyon walls -- simply amazing. 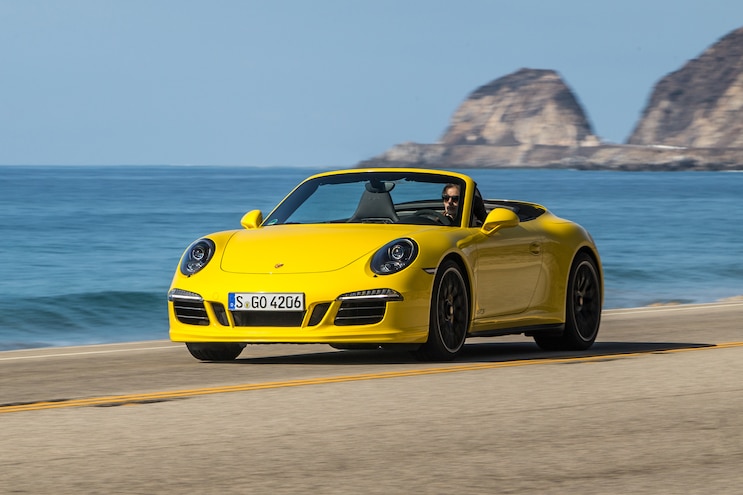 View Photo Gallery | 38 Photos
Photo 9/38   |   2015 Porsche 911 GTS Cabriolet Front Three Quarter 02
You can build a 911 S that almost identically matches the GTS, short a couple features. That said, you'll spend a lot more money optioning your 911 S to match the standard features on the GTS, and it still won't match it because there are a few goodies only offered on the GTS.
Porsche wanted a car that fit between the 911 S and GT3, and it has definitely done that, but at what cost? With pricing being relatively similar, I truly see the GTS taking sales away from the 911 S. To me the question is, why do you need an equally performing S when you can get the GTS for less money?