Centrist's Hammer: At Last, An AMG for Goldilocks 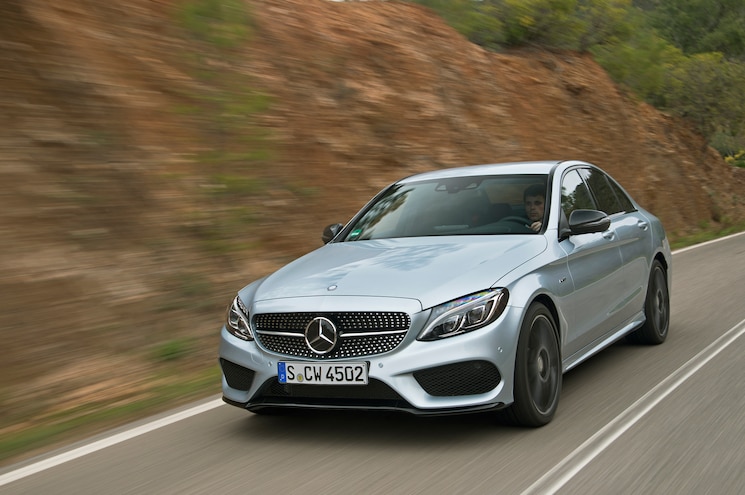 Apparently C-segment sport sedan buyers have been quitting Mercedes-Benz dealers empty handed, mumbling, "This race car C63 is too hard and loud (and expensive)," or "The AMGness of this C400 sport package is too soft and slow (and inconspicuous)." They've been having their "Ahhhh, just right" moment in the Audi store with an S4 or at BMW with a 335i M Sport. Enter the just-right tweener -- Mercedes-Benz C450 AMG 4Matic.
We cognoscenti have already learned that "real" AMGs -- the ones with an engine built in Affalterbach and autographed by a single technician -- now get the "AMG" written before the letter/number designation and this new breed of mid-price Hammers say AMG after the number. They'll also, it appears, all be getting 4Matic all-wheel drive to make their performance more accessible to this new Goldilocksian class of less hardcore performance clientele. (AMG driving school isn't part of the deal on these.) 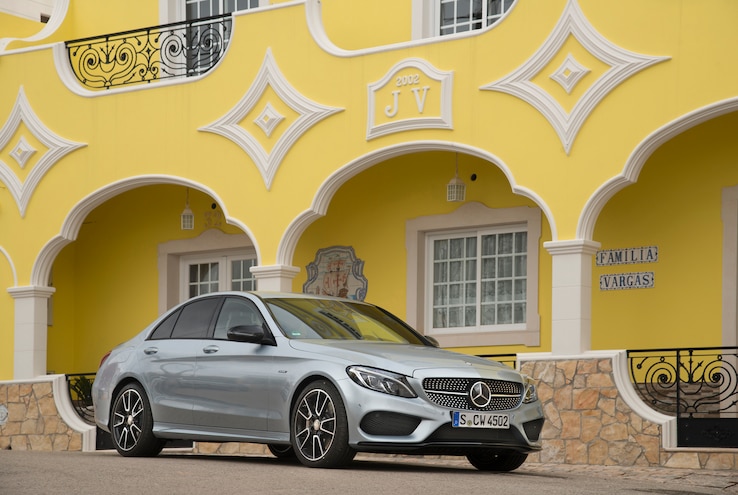 View Photo Gallery | 128 Photos
Photo 2/128   |   2016 Mercedes Benz C450 AMG 4Matic Front Three Quarter Static 02
Naturally, AMG will enter this market niche from a position of dominant engine performance by turning up the wick on the twin-turbo, 3.0-liter V-6 that has been serving the C400 range. (That model will be dropped upon the C450's introduction for 2016.) By nudging the boost up, output climbs from 329 hp and 354 lb-ft in the C400 to 362/384. That's segment-leading thrust against the S4's 333/325 and BMW 335i's (admittedly coy) 300/300. Oh, and there's a sporty red applique on the engine cover.
The lone transmission choice is Mercedes' 7G-Tronic automatic, which uses a traditional torque converter but is programmed for crisper, quicker shifts in the Sport+ setting of the AMG Dynamic Select program. Engine ignition and injection timing is slightly retarded to speed these shifts up and make them sound sportier. The standard 4Matic all-wheel-drive system is tuned by AMG for sportier handling with a permanent front/rear torque split of 33/67 percent, and the stability control system is programmed to support cornering with brake-actuated Curve Dynamic Assist. 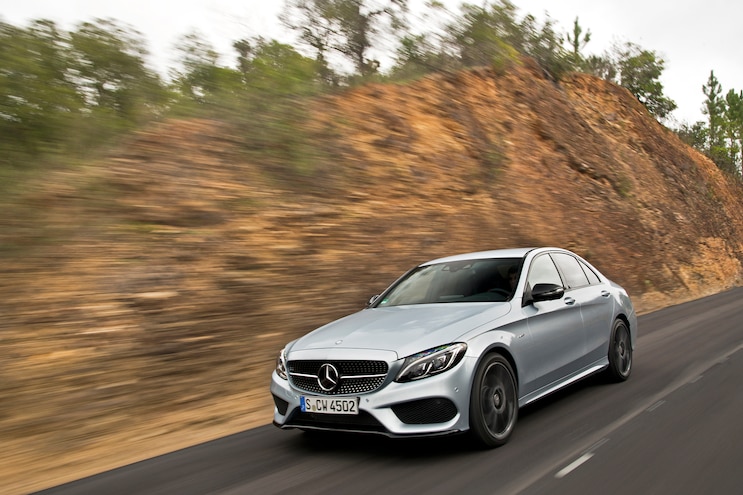 View Photo Gallery | 128 Photos
Photo 6/128   |   2016 Mercedes Benz C450 AMG 4Matic Front Three Quarter In Motion 04
The suspension also benefits from AMG fettling, including thoroughly revised geometry (a touch more negative camber front and rear for better cornering), elastokinematics (bushings stiffened to resist lateral dynamic loads), and fitment of three-position electronic damping and variable electric steering-assist systems like those used on the C63. Brakes are also upsized to 14.2-inch front and 12.6-inch rear vented rotors.
To make Goldilocks comfortable with the conspicuousness of her new AMG, the exterior gets a decklid spoiler and revised fascias, with the intake nostrils in front flaring to look more menacing and racy than a C300 but comfortably less so than a C63. These elements are further enhanced by gloss black accent trim, special 18-inch standard or 19-inch optional AMG wheels, and new AMG sports model logo badges on both front fenders. (They're different than those of the big-boy AMGs.) Inside there's red stitching galore on the leatherette-covered dash, door trim, seats, console, and steering wheel, plus aluminum and piano-black trim. (Woods are optional.) 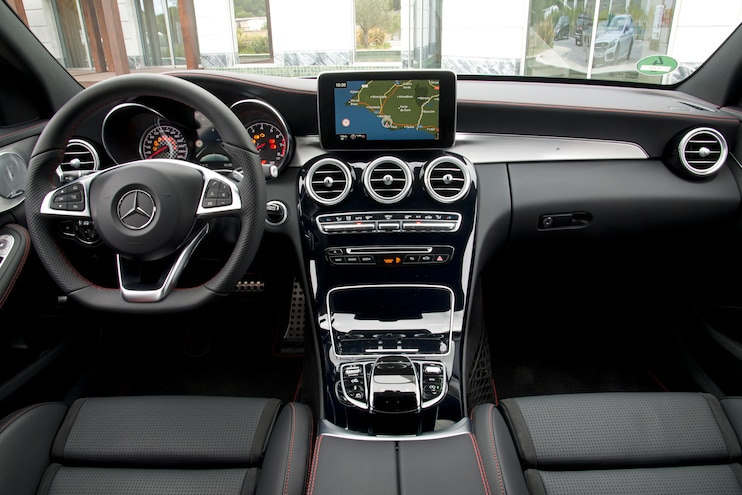 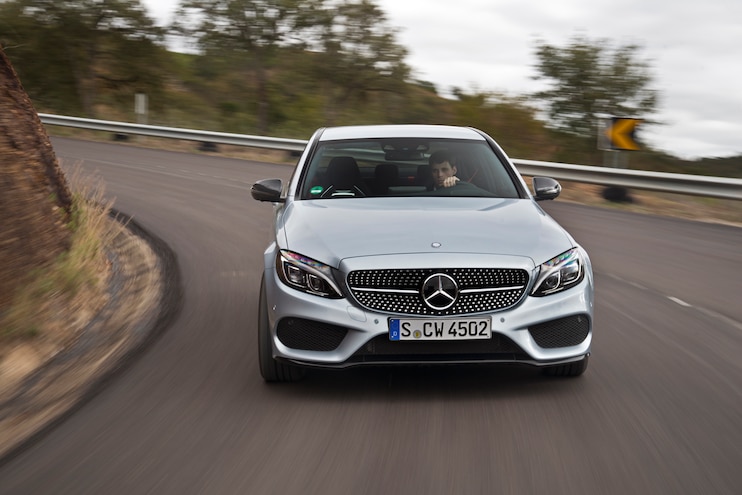 View Photo Gallery | 128 Photos
Photo 14/128   |   2016 Mercedes Benz C450 AMG 4Matic Front End In Motion 02
Out on the road, the C450 AMG's dynamics occupy a decidedly sweet spot in the C-Class lineup -- way more powerful and fun to toss around than the cooking-grade C300, quieter and slightly more comfortable than the C63 with a noticeably lighter, more nimble nose. Having driven them directly back-to-back, the C450's steering and turn-in actually felt more satisfying on public roads. On a wide, smooth track with FIA-approved runoff and protection and no opposing traffic, I'll choose the C63 every time, but in southern Portugal's hilly, twisty, narrow, Algarve hill country with Sport+ and soft damping selected, the C450's sure-footedness and agility proved delightfully engaging with just a bit of that "more fun to drive a slow car fast" thing going for it. And then there's that equally engaging exhaust note — you get the C63's same sort of braaps and farts on downshifts and overrun, just sung in a slightly higher V-6 register. You'll find yourself fingering the minus paddle just to enjoy the noise.
Pricing has not been finalized but is expected to mirror the S4's, so figure mid-$50s to start with ample opportunities on the order sheet to inflate that. At $54,000, relative to the base C300, you're paying a 37 percent base price premium to get 50 percent more horsepower and 41 percent more torque -- reasonable bang for the buck. Using the same math, Audi S4 folks pay 52 percent for 51 and 26 percent, and a 335i with all the M-Sport boxes ticked costs 41 percent more than a base 320i but buys 67 and 50 percent more (conservatively rated) horsepower and torque. 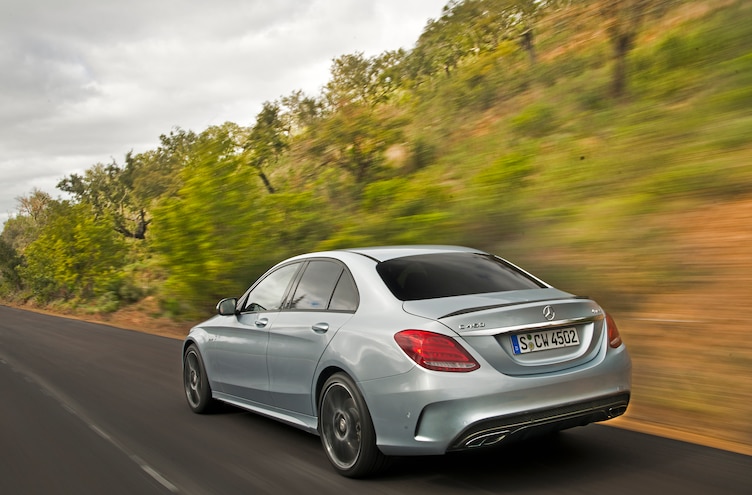 View Photo Gallery | 128 Photos
Photo 15/128   |   2016 Mercedes Benz C450 AMG 4Matic Rear Three Quarter In Motion
Prior to my arrival in Portugal, I was concerned that this new crop of quasi-AMGs would dilute the brand's Hammer image. What are these, jewelers' hammers? Nope. Class-dominating power that sounds as good as it feels plus race-bred dynamics and just enough visual drama satisfy me that these cars have earned their black AMG badges. We'll organize a comparison test of these C tweeners as soon as the first C450s hit our shores, but for now we're eager to hear how our readers handicap that face-off. Let us know in the comments.


Editor's Note: Although the U.S.-spec 2016 Mercedes-Benz C450 AMG 4Matic will only be offered as a sedan, the European-spec wagon is also shown here.