One Grandfather, One Farm, and 650 Horses 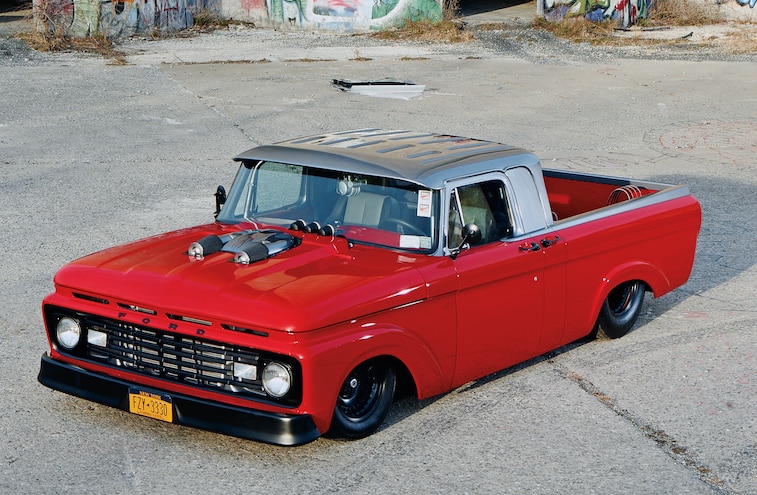 Editor's Note: This story originally appeared on Truckin Magazine, as well as on the Hot Rod Network. Visit both sites for more stories like this one.
Your first truck has a way of sneaking into your memories and staying there. It leaves an undeniable mark, even long after it has gone down the road to be sat in by another owner. For Scott Winter of Germantown, New York, that truck was his grandfather’s beat-up ’63 Ford F-100 that had traveled the family farm for many years before the acreage and the truck were left to him after his grandfather died.
He drove it for a few years and then decided to sell it, telling himself it was just an old truck and he didn’t need it. But the F-100 stayed in Germantown and came back to him over 20 years after he had seen it a little dustier than he left it, parked at a local repair shop. After three owners, it still had his name on the registration. Take that, New York DMV! He now knew what he wanted to do with the truck his grandfather had left him: chop it, lower it, stretch the frame, add a third door, and turn it into a Pro Touring monster.
Scott already had a few years of fabrication experience under his belt so he decided what any normal person would do when faced with a tired old farm truck and that is to make it fast and sleek.
He started with boxing the stock frame while adding new crossmembers and new rear section with a few buddies on nights and weekends. Then, the suspension got dialed in with a Fat Man frontend, as a set of Firestone ’bags with 3/8-inch air lines got paired with QA1 shocks and were added to the mix. In the rear a set of Dominator ’bags were paired with more QA1s, as a four-link setup was created by Scott and a master machinist and metal manipulator friend of his. 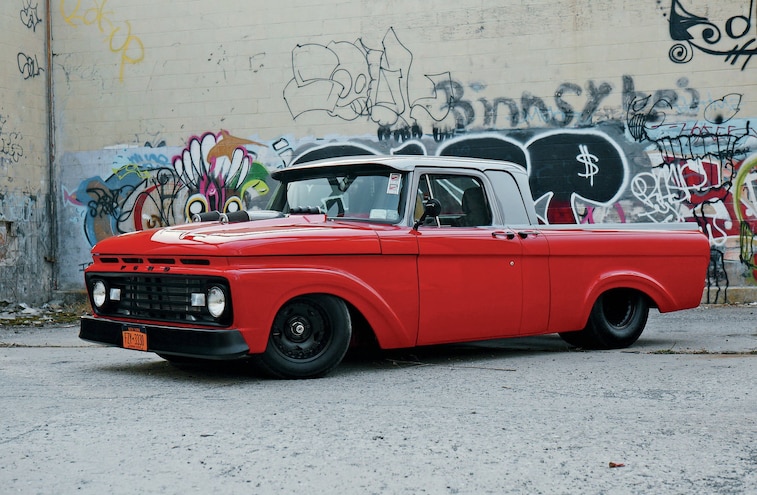 View Photo Gallery | 13 Photos
Photo 2/13   |   1963 Ford F100 Rear Side View
The engine got sent out to Pacific Performance Solutions in Anaheim, California, where a mid-’80’s 460 got pushed out to become a fire-breathing 533 maxing out at 650 hp with 685 lb-ft. With ported heads, a 4340 forged steel crank, H-beam connecting rods, Manley pistons, Crane hydraulic roller cam, dAMBEST carburetor, Edelbrock intake, custom air cleaner, MSD ignition, Be Cool Radiator and fan, this beast will redline at 6K in Second gear! A FB Performance Transmissions AOD with electric overdrive, 2,200-stall speed converter, and a Hurst Quarter Stick shifter keep all that power in check, but just barely. With a line locker, Scott lights up the tires just for fun at red lights.
The body has a laundry list of mods that were all done by Scott and his metal man in residence over the course of five years. The hood had a void put in where the scoop normally goes to give the twin K&N filters unrestricted airflow as a donor hood got sliced up and the section put in between the intake pipes. The entire cab was reworked, starting with the windshield being cut, then the roof lowered 3 inches, and a late-’80s Dodge van got scalped for its roof skin. The cab wall was cut and moved back a foot so a third door could be added from a donor F-100, and, finally, all the gaps were sewn up with steel.
The paint was kept simple by using PPG Viper Red and Tungsten Gray paint, sprayed by Brian Semancik, which contrasts the black powder accents added to the wheels, bumper, and grille. A red pinstripe was added to the wheels to match the ’stripe of the intake shield. A small plaque to commemorate the build was added to the engine bay to forever thank his friends, and his grandfather’s name was added to the tailgate. 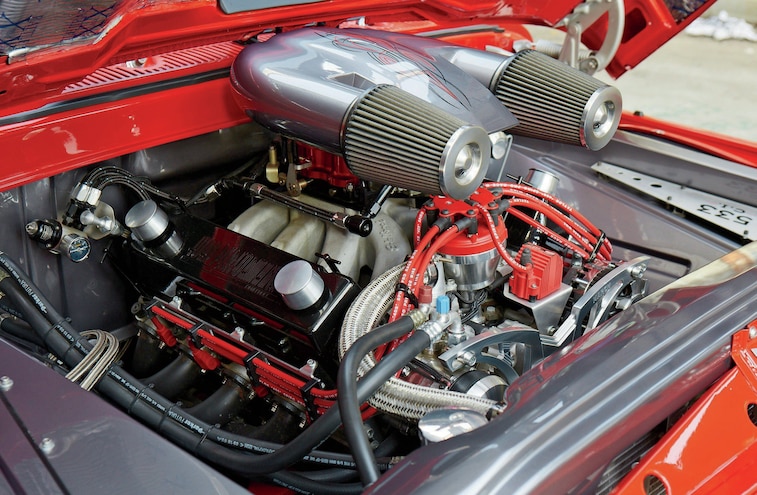 View Photo Gallery | 13 Photos
Photo 3/13   |   1963 Ford F100 Engine View
The interior got treated to a custom rollcage, ’09 Grand Prix bucket seats were wrapped in black and gray leather, and a custom center console that elevated to become more driver-centric. The fuse box was relocated behind the driver for easier access, and a set of gauges got mounted at eye level so Scott could monitor all the important info in an analog heads-up display.
“I wanted to build this truck to give it power, strength, and good looks. It’s all about the metalwork, which took forever but is just art to look at,” Scott says. “But this is not some show queen, I’ve had it up to 130 mph and taken it out at least once a week. I’ll be going to Lebanon Speedway soon to really see what she can do!”
Sometimes the past comes back to haunt you; this time the past came back to haul ass! 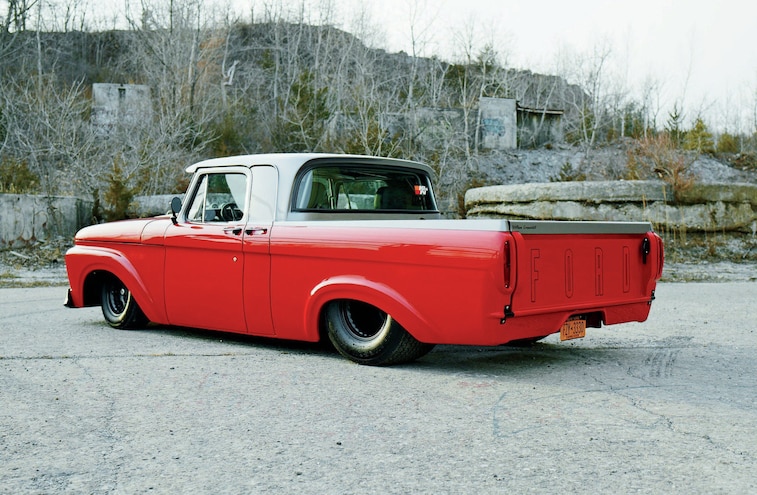