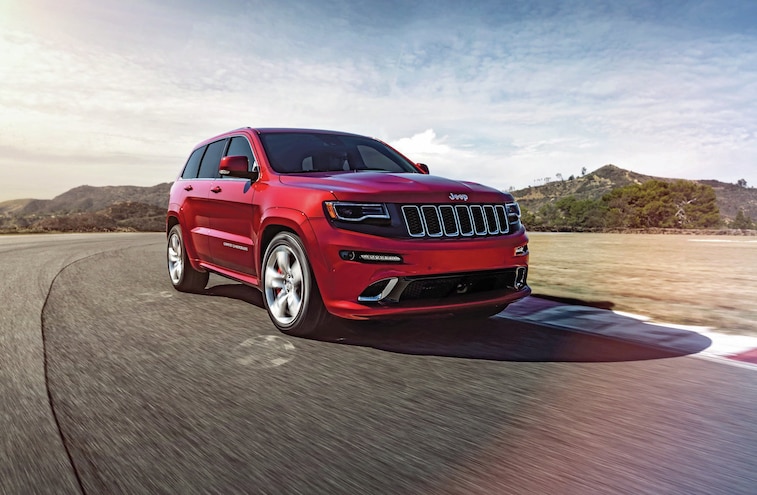 Combine an awe-inspiring powertrain, outstanding braking, wide sticky tires, sports car handling, aggressive exterior styling, and a race-inspired interior and you’d probably think we’re talking about one of the hottest new performance cars to come out of Europe. But we’re not. We’re talking about an American SUV; specifically, the angry, pissed-off younger brother of the Jeep Grand Cherokee family, the SRT. It’s all of these things, and more, rolled into one fire-breathing 2 ½-ton American SUV.
Considered by many to be the most underrated of the performance SUVs, the Grand Cherokee SRT leaves no doubt about its mission. The folks at Jeep and SRT have aimed squarely at their European competitors, and they are gunning them down one by one. Stuffed between the fenders is a brutal 470hp 6.4L Hemi V-8 engine that propels the five-passenger grocery getter from 0-60 mph in just 4.4 seconds. That’s quicker than a Porsche 911 Targa 4S.
New for ’14 is the addition of the sophisticated ZF 8HP70 eight-speed automatic transmission. The result is quicker shifts and, with more ratios to choose from, improved fuel economy. In manual mode (activated by way of new steering wheel-mounted paddles), shifts fly at a lightning pace, unlike with the previous transmission. Also accompanying the new slushbox is the addition of Launch Control. As much fun as it is to play with, we got the best reaction from the Jeep with the old-school brake and throttle two-step with the Selec-Track placed in Track Mode. Having all-wheel drive, the Jeep isn’t very susceptible to wheel spin, leaving the Launch Control feature far better suited to the Dodge Charger or Challenger SRT. 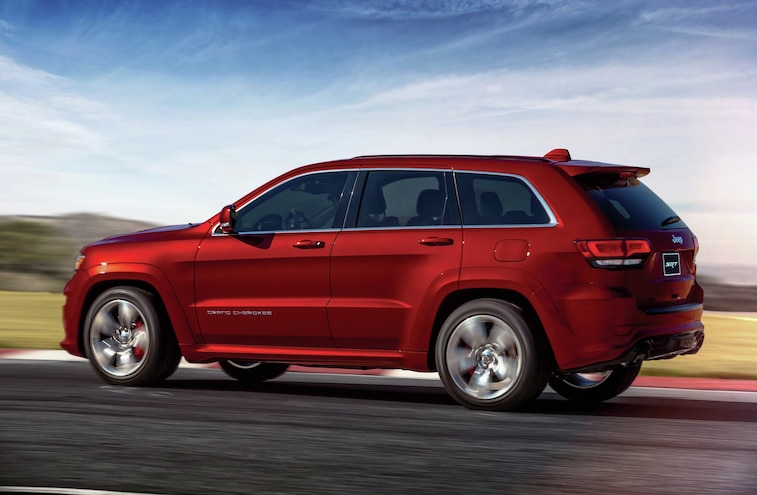 View Photo Gallery | 19 Photos
Photo 2/19   |   A large dual exhaust system gives steed a deep, throaty, rumble, while black chrome tips add to the aggressive styling. An integrated trailer hitch lives under the SRT cover, and a 7,200-pound tow rating means you don’t need to leave the toys at home.
The sophisticated all-wheel-drive system is rear-biased and becomes even more so when placed in Track Mode. Selecting this most aggressive of driving modes changes the damper settings to full firm, opens exhaust flapper valves for a throatier sound, and disables the traction control. Stability control remains active but is less restrictive. You really don’t want that one turned off anyway. Torque delivery in Auto Mode is split 40 percent to the front and 60 to the rear through the electronic center differential. However, in Track Mode, this changes to a 30/70 split, allowing the Grand to hang the rear end out a bit in the corners. Sport Mode offers a happy medium between Auto and Track, which is calibrated more for spirited highway driving. The Selec-Track system also offers two specialty modes: Snow and Tow. Snow Mode dampens engine torque delivery and splits it 50/50 for full control in adverse weather conditions. Tow Mode is quite similar but also firms up the suspension to combat squat from the added weight of a trailer.
Twisty mountain and canyon roads are where this Jeep loves to live. It eats corners and destroys straightaways. Yet, cruising on the highway, it proves to be as docile as a house cat—that is if you can keep your foot out of the skinny pedal. Equipped with cylinder deactivation, it also has the ability to knock down fuel economy numbers in the low 20s (beating the EPA estimate), which is quite impressive in a vehicle with 392 ci under the hood.
All in all, we have to say that the Grand Cherokee SRT is one of the must fun vehicles that we’ve ever driven, and that’s really saying something. The power and performance is amazing, and interior appointments are fun, luxurious, and sporty all at the same time. Best of all, it seats five adults and still has room for the golf clubs. And lest we forget, the exterior styling is phenomenal. This Jeep is brutal, fiery, and flat angry. It lays waste to the road and anything on it. It’s juvenile at its core, while still delivering on the needs of adulthood—And we love it! Starting at a mere $63k, this sport utility racer is a flat bargain at half the price of the competition. If you can find your way behind the wheel of one of these beasts, we guarantee you will not be disappointed. 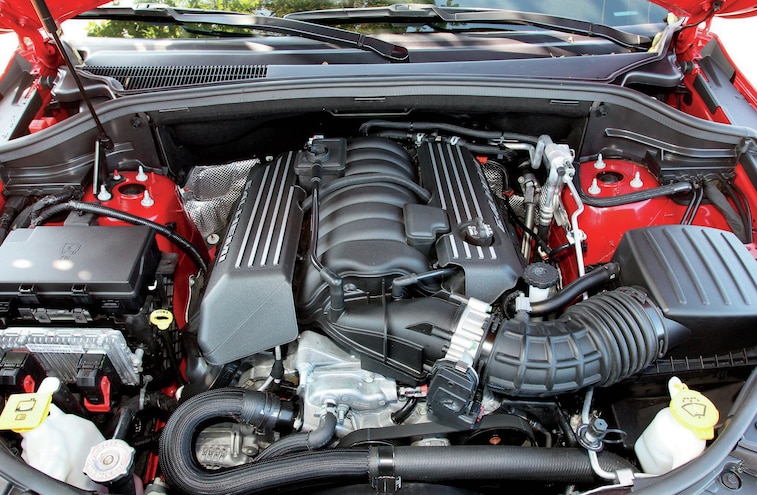 View Photo Gallery | 19 Photos
Photo 3/19   |   Under the hood lives a ferocious beast taking the form of a 6.4L Hemi V-8. Cranking out 470 hp and 465 lb-ft of torque, this hot mill propels the 2 ½-ton SRT from 0-60 in just 4.4 seconds. Below, Eco mode and fuel saver technology have been added without compromising the power output of the 6.4L Hemi engine. When the vehicle is moving down the road at a steady pace, the system can deactivate four cylinders, which helps to increase fuel economy. 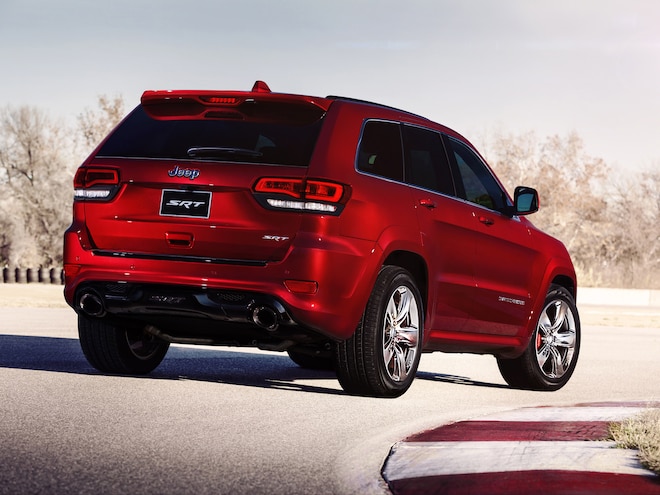