Living up to the Hype 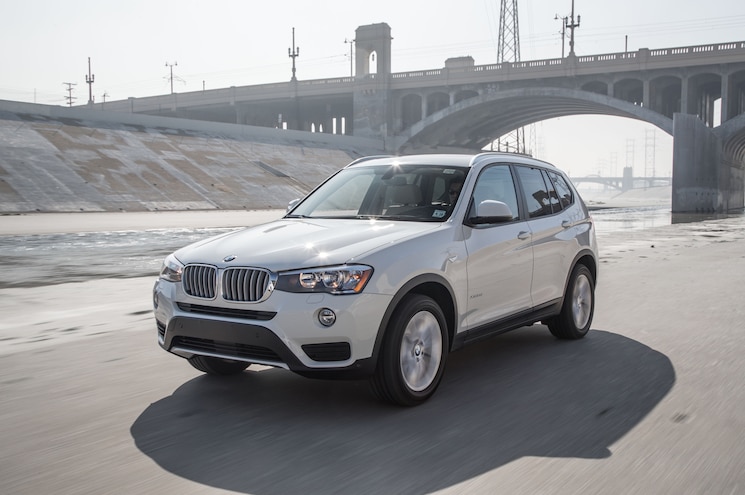 BMW's reputation precedes it. Putting the roundel on a vehicle brings expectations. Because it has the BMW badge, it must be a sporty, fun-to-drive vehicle, and it must be built to the highest standards of German quality. These are a few preconceived notions consumers have formed about the brand over the years. But are those assumptions always well-deserved? A few days behind the wheel of an X3, BMW's fourth-best-selling vehicle in 2014, shed some light on the subject.
Our 2015 X3 was an xDrive28i model equipped with the ubiquitous turbocharged 2.0-liter I-4 and all-wheel drive. The X3 was refreshed for the 2015 model year, but the base turbo-four engine still makes the same 240 hp and 258 lb-ft of torque. The refresh brings some welcome changes, however. The styling has been brought up to date with the rest of BMW's lineup, with headlights that connect with the kidney grilles and a few other minor details. Our X3 as equipped rang up at $50,200, including more than $8,000 worth of options. That's a lot of cash, but it does get you a good amount of content. It's also not outrageous for the class. A Range Rover Evoque, which starts slightly higher than the X3 at $42,025, recently came in equipped to $61,070. If you don't need all-wheel drive, you could opt for the new-for-2015 rear-drive X3 sDrive28i, which starts a bit cheaper at $39,450. 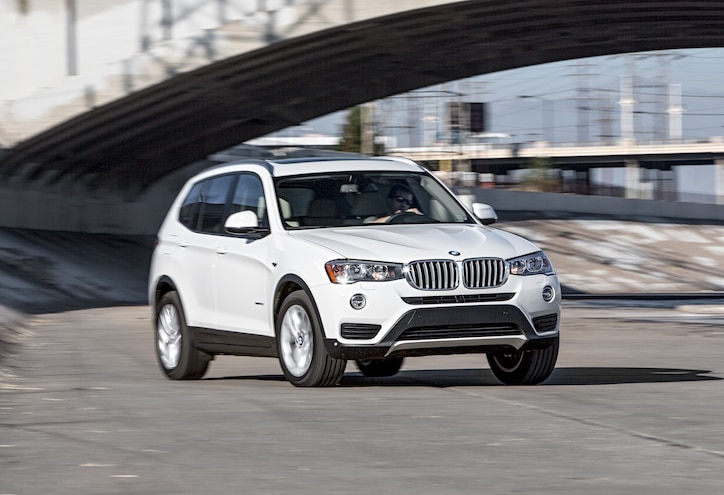 View Photo Gallery | 23 Photos
Photo 2/23   |   2015 BMW X3 XDrive28i Front Three Quarters In Motion
The eight-speed automatic transmission is marvelous as usual, but steering wheel-mounted paddle shifters were sorely missed. However, you can still pull the gear selector to the left for Steptronic mode to manually shift quickly and precisely. When left in Automatic mode, the gearbox likes getting into high gear as quickly (and seamlessly) as possible. There were times when the crossover stayed in high gear even at low speeds, hampering acceleration. But a deliberate application of the throttle forces the transmission awake and causes it to downshift. Switching to Sport mode also seems to do the trick.
Acceleration with the 2.0-liter turbo is brisk for a crossover, with the X3 recording a 6.0-second 0-60 mph time in our tests. The quarter mile came in 14.7 seconds at 91.3 mph. That compares favorably to the previous X3 xDrive28i with the 240-hp, naturally aspirated, 3.0-liter I-6. Our long-term 2011 X3 took 6.7 seconds to get to 60 mph and 15 seconds to complete the quarter mile. The X3 is also more than a match for its turbo-four-powered contemporaries. A Lexus NX200t recently put down a 7.0-second 0-60 time, and a Range Rover Evoque hit 60 mph in 7.4 seconds. Even the 302-hp, twin-charged I-4 of the Volvo XC60 T6 was only able to scoot it to 60 mph in 6.3 seconds, though that engine currently only comes paired with front-wheel drive. 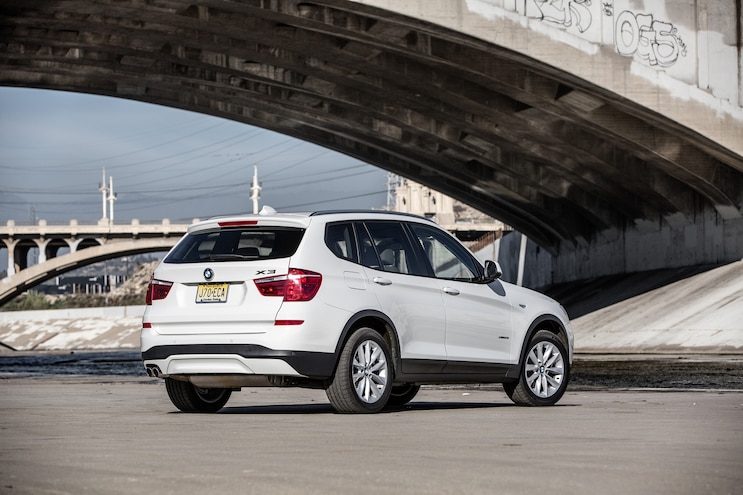 View Photo Gallery | 23 Photos
Photo 6/23   |   2015 BMW X3 XDrive28i Rear Three Quarter
Braking improved over the six-cylinder xDrive28i, with the 2015 model stopping from 60-0 mph in 114 feet compared to 125 feet for the 2011 model. The 2015 was also quicker around our figure-eight course, posting a time of 26.9 seconds at an average of 0.77 g versus 27.8 seconds at 0.61 g for the last xDrive28i we tested. The Range Rover Evoque is slightly quicker at 26.7 seconds and a higher average of 0.79 g. The BMW, however, bests others in the category, including the Audi Q5 and Lexus NX, which posted 27.1 seconds at 0.76 g and 27.2 seconds at 0.65 g, respectively.
Though the X3 wouldn't be out of place on a curvy road, it's better suited for the highway and city streets. The ride is smooth and quiet, with minimal road noise making it into the cabin. The seating position gives you a commanding view of the road, and the unobstructed greenhouse provides great visibility. The head-up display that comes with the $3,150 technology package is convenient and well-placed, though we wish there was a way to make the numbers bigger. Although the cabin is nice enough, some staffers weren't sold on the interior design and quality. The dash and door panels use a soft-touch, rubbery material, but the dashboard's look is sterile and uninteresting. The Burl Walnut wood trim looks and feels like plastic despite using genuine wood veneers, and the leather upholstery is stiff and feels dry. However, the visible, textured grain is a nice touch. When we pressed certain buttons, the plastic trim surrounding the radio and HVAC controls creaked. So if buyers are expecting the highest level of German precision and craftsmanship, they might be somewhat disappointed. If they want a nice, safe-looking interior that's comfortable and feels premium, then the X3's interior fits the bill. 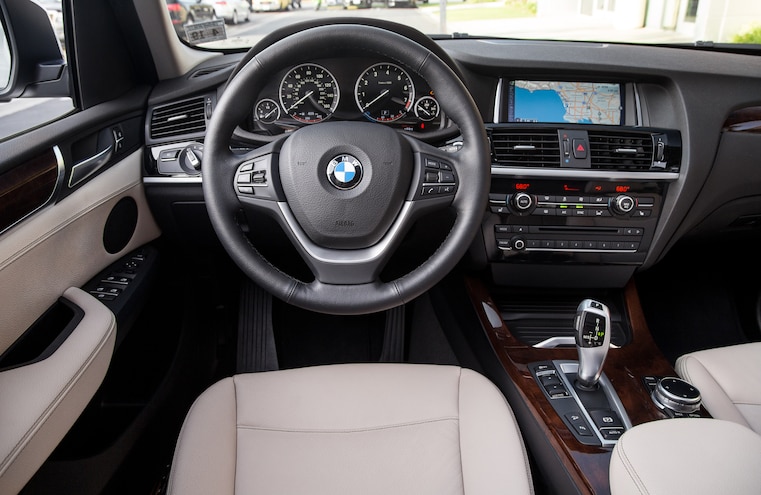 View Photo Gallery | 23 Photos
Photo 7/23   |   2015 BMW X3 XDrive28i Cockpit
No one denied that the X3 was spacious inside. I had legroom to spare sitting in the back seat behind a 6-foot driver, and rear headroom was also more than adequate. In the driver's seat, ergonomics are very good. The armrests are well-placed and provide plenty of cushioning. All of the controls are within reach, and the infotainment system's menus are intuitive and easy to navigate. The touchpad on the iDrive control knob makes inputting destinations quick and painless, though the voice recognition isn't half-bad, either. The rear cargo area offers ample space with the back seats up, and the standard cargo rails with tie-down points are useful if you need to secure something. If you don't, you can slide them up and out of the way.
The X3 xDrive28i is a solid pick in a segment that continues to offer buyers more and more choices. With its blend of performance, comfort, and utility, the X3 will please not only the casual crossover shopper who wants something premium and usable but also the driving enthusiast who needs something bigger but still wants a sporty ride. In the X3's case, the reputation that precedes it is earned. 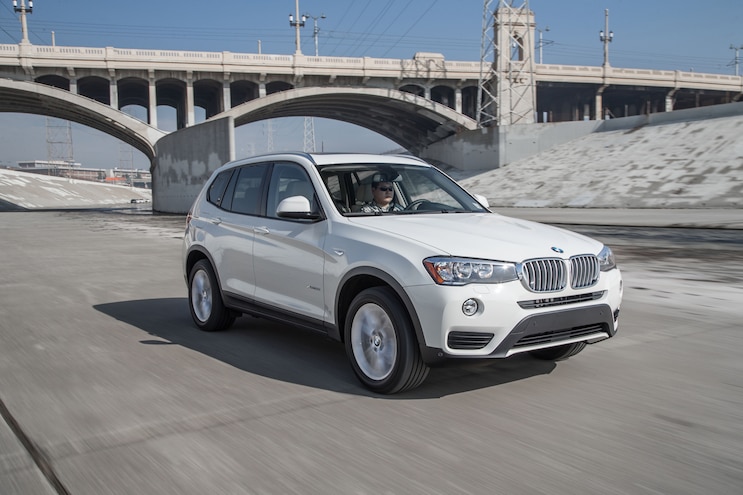 - OF
By Alex Nishimoto
196 Articles