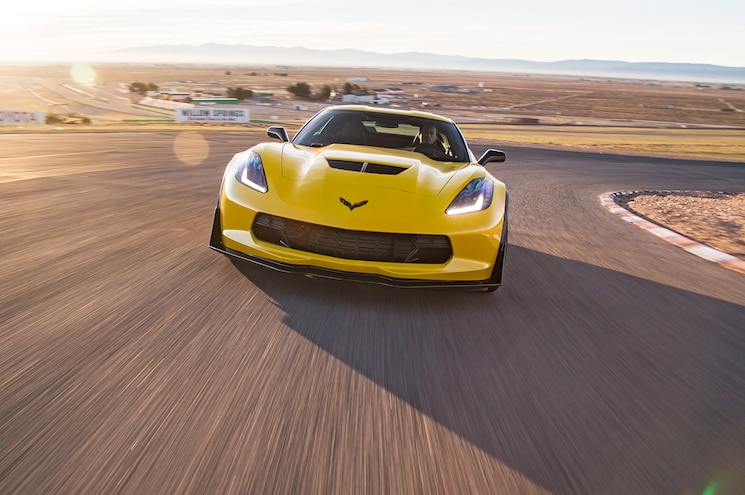 "Unfortunately for the Z06, these numerical advantages don't play out on the racetrack."
With those words, our highly anticipated comparison between the Chevrolet Corvette Z06 and the Nissan GT-R NISMO, our April 2015 cover story, took a serious turn. On paper, the Z06 should've schooled the NISMO. In the real world, it didn't, and that was the biggest factor in tipping the test toward the NISMO (the Z06 from that comparison is shown here)
It certainly didn't seem right to us, and we said so. The Z06 has power, weight, grip, and braking advantages, but it was 1.4 seconds slower around Willow Springs International Raceway's "Big Track." Because the Z06 was slower on the straights while being quicker mid-corner and braking later, we assumed the fault was in the Z06's massive aerodynamic package. As best we could figure based on the data we had, excessive drag from all the downforce the aero kit was making had to be the reason the Z06 was slower.
Turns out we were wrong. 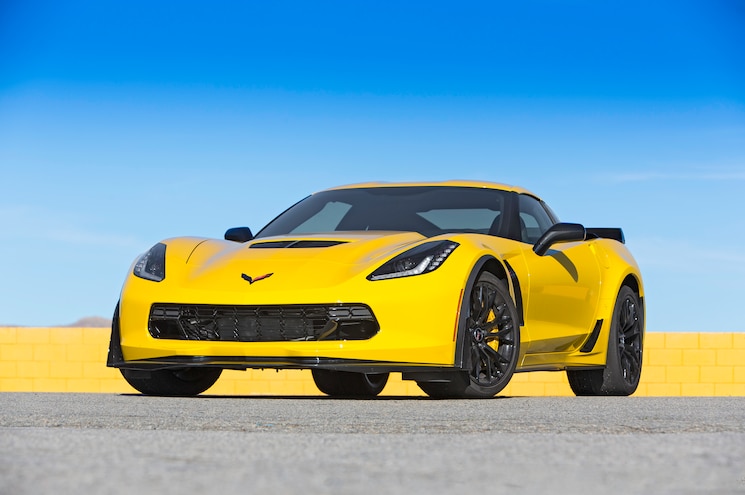 View Photo Gallery | 26 Photos
Photo 2/26   |   2015 Chevrolet Corvette Z06 Front Three Quarters
The real reason the Z06 was slower was because Chevrolet gave us a car with the rear suspension out of alignment. It was supposed to be running 0 degrees of rear caster. Instead, it was running positive 2 degrees. This made the rear dampers less effective at controlling the rear suspension and as a result made it more difficult for the Z06 to put power down. This is exactly what Randy Pobst complained about during our test.
How did this happen? Rear caster adjustability is pretty rare. Outside of a race shop, most people will tell you it's not a real thing, that caster adjustment only affects the front wheels (the steering wheels). Usually, rear caster is set at the factory and can't be changed even if you want to. It's something Chevrolet engineers added to the C7 Z06 so it could be better aligned for track duty, and when you change the rear camber and toe, you can mess up the caster if you don't check for it. This is apparently what happened at Chevy's alignment shop.
Let's answer the obvious question then: How does the Z06 perform when the rear end is aligned properly? Better. Much better. Recall the car previously did a good-but-not-great 1:27.10 during our comparison test. This time? 1:25.00. A massive 2.1-second difference. 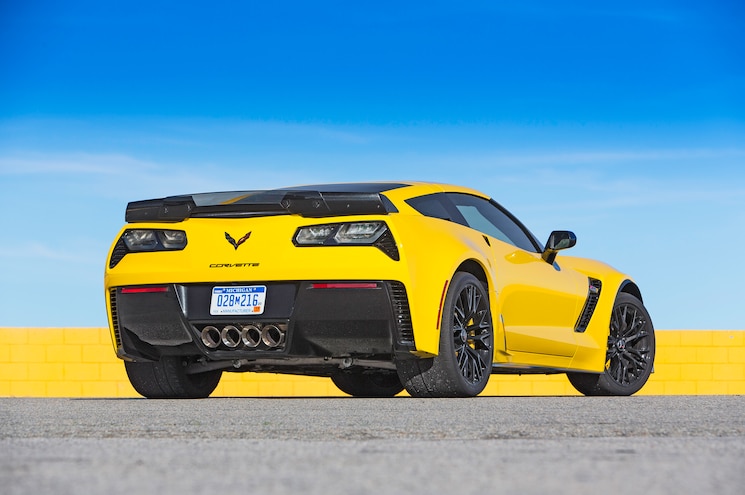 View Photo Gallery | 26 Photos
Photo 3/26   |   2015 Chevrolet Corvette Z06 Rear Three Quarters
It should be noted, however, that Chevrolet fixed more than the rear alignment. At the same time we were performing our original test, Chevrolet was both launching the car to the media and testing it at Spring Mountain Motor Resort in Pahrump, Nevada. Like Willow Springs, Spring Mountain's track is rough and bumpy. Until this point, Chevrolet had done most of its development testing at newer and smoother Virginia International Raceway, Road Atlanta, and at its Milford Proving Grounds. The car hadn't been developed on a rough track, which is why Pobst complained it was too harsh at Willow Springs and was beating him up. Pobst actually preferred to run the car with the suspension in the softer Sport mode. As a result of this new testing at Spring Mountain and additional testing at Willow Springs, Chevrolet developed a new Rough Track mode for the Z06 that softens the dampers in Track mode. Chevrolet plans to make this software update to the Z06 available soon through the GM Performance Parts catalog, and our test cars at this retest were both fitted with the new software. We cannot say, then, that the improvement in lap time was due solely to the corrected rear alignment, as it's possible the new damper programming also aided the Z06's performance.
"The ride was far better than the last car I drove, in Track mode," Pobst said. "It made it so much easier to drive. It was still firm. But I don't think the ride was really that important. I think it's that alignment issue because I don't get that rear steer anymore. The car is still, in my opinion, a little bit oversteer-y. It should be, in my opinion, a little bit understeer-y, especially so you can keep your foot in it when you're going around a corner -- you can use more power -- so it doesn't go to oversteer as quickly."
Back to the lap. The data revealed our assumptions about the aerodynamics were wrong. The Z06 was faster on the straights than before but still not as fast as the NISMO. It gained mightily at corner exits. Now able to put power down more effectively, the Z06 exited Turns 2, 6, and 9 faster, making up precious time there and on the straights that followed. Pobst's renewed confidence in the car's handling also allowed him to carry more speed through tricky Turns 8 and 9. Over the course of his fastest laps, Pobst carried more speed with the Z06 than the NISMO through Turns 1, 2, 8, and 9. The data showed he also braked later into Turns 1 and 2, which could be due to both increased confidence in the car and more familiarity with it after so many additional laps.
"Way better than it was last time!" Pobst yelled as the door swung open. "This was so much nicer to drive. Oh my gosh. The butterflies are gone. The fear is gone. There was a lot of fear in the car before. Just the handling, I trusted it way more. I still don't experience a push anywhere. All the way around the Turn 2 carousel, it feels like I have very little steering in the car. Really balanced. Even the tail, the tail may be coming, but in a no-fear kind of way, like, 'Wow, this thing's really balanced!' "
Still, there was one hang-up: the four-five upshift. "It is a little tricky to hit fifth gear," Pobst said. "The first lap, I got the wall between fifth and seventh. So I practiced it. The next lap, I tried it and got third. Then the next lap, I didn't need it, and I was like, 'Crap, I wasted my 4 extra mph fifth would've given me." 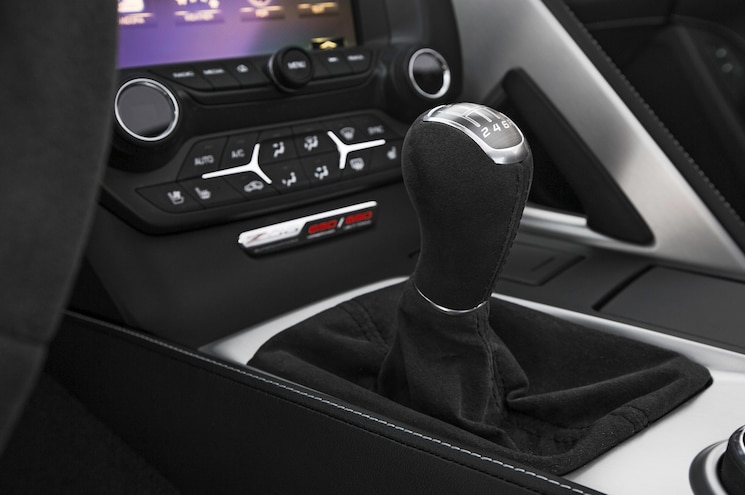 View Photo Gallery | 26 Photos
Photo 8/26   |   2015 Chevrolet Corvette Z06 Front End In Motion
We agree with that call for a serious track day enthusiast. As in previous tests, the Z06 got very hot during lapping and pulled power. Per Pobst: "The power starts to fall off significantly after the first lap. It was nearly pegging the oil temp gauge after a few laps. 320 degrees. I did a cool-off lap and it came right back down."
We checked the data, and lap times and peak speeds did fall off by a few tenths of a second and 1 or 2 mph on each subsequent lap, though these could also be attributed to tire wear and other factors. Although Pobst has consistently complained of reduced engine power when lapping C7 Z06s, the problem does not appear to be especially great (in terms of lap times) and only seems to affect drivers of Pobst's incredibly high skill, suggesting that most customers won't encounter it.
Which transmission would Pobst choose? "Automatic 'cause I have fifth gear," he said. "If I'm at a track where I don't need fifth, I might prefer the manual because I like the level of control."
Regardless, the results are clear. When properly aligned and using a softer damper calibration, the Corvette Z06 is as fast as or faster than the GT-R NISMO at Willow Springs. All said and done, the manual Z06 ran a 1:25.00 and the automatic a 1:25.76 to the NISMO's 1:25.70.
The big question, then, is whether to reverse the result of the comparison test. As you'll recall, the decision was extremely close. What ultimately tipped the balance in favor of the NISMO is that its performance came despite its disadvantages. As noted in that test, "It's working with an older chassis, significantly more weight, less powerful brakes, less tire, less power, and much, much less torque." In that regard, nothing has changed. It's also almost as fun to drive on the street and nearly as fast as the Z06 on a racetrack. Carlos Lago and I have debated the subject, and we agree it's simply impossible to say without putting both cars back-to-back again. Based on the information we have, the best we can do is declare a mistrial rather than overturn on appeal. 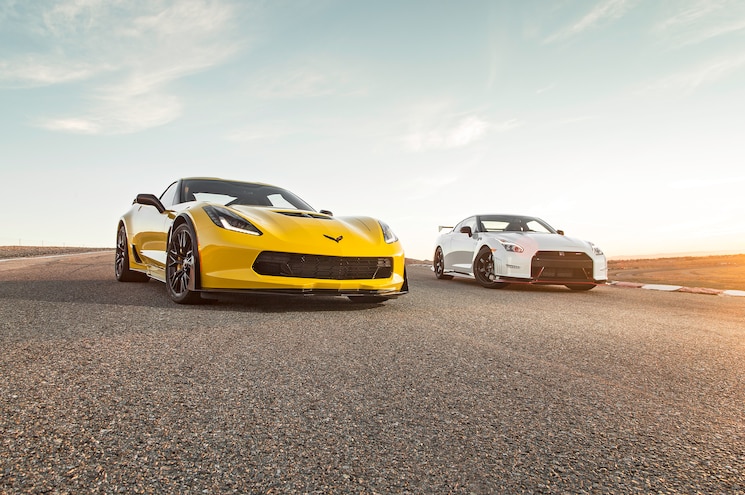