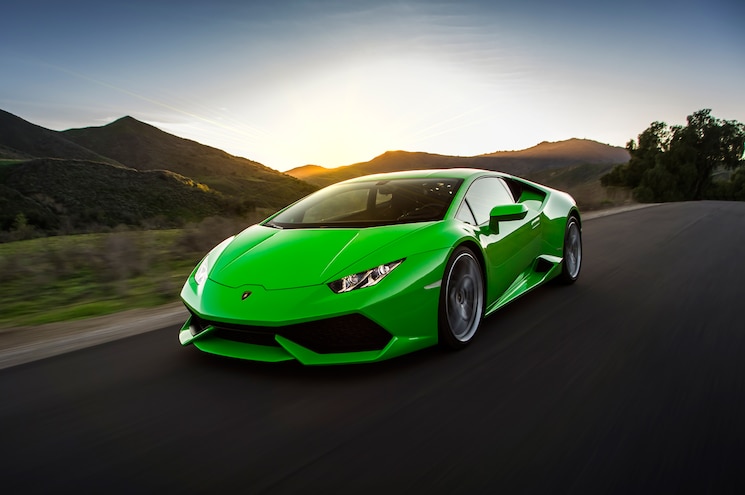 When writing a car review, I generally try to throw some misdirection into the first paragraph to keep the reader guessing. Not here. "Wow, wow, wow, WOW! That's better than any Ferrari I've ever driven!" So exclaimed Motor Trend hot shoe Randy Pobst as he swung open the Lamborghini Huracan's door and jumped onto his feet. His smile was a mile wide. Randy had just finished five laps of Big Willow, the infamously high-speed track north of Los Angeles. Randy usually performs three hot laps for us when he's trying to set a fast time. "I took a couple extra because the car's so good," he admitted. Randy's not alone. I let one of our video guys drive Kermit the Lambo to grab a spare battery. When he climbed out of the Huracan, he hugged me.
Let's just cut right to the performance figures. The 3,419-pound Huracan is AWD and has a mid-mounted, 5.2-liter naturally aspirated V-10 with 602 horsepower and 413 lb-ft of torque. That howler of a motor sends its fury to a seven-speed twin-clutch gearbox. The following numbers were recorded on Pirelli P Zero tires (245/30R20 front, 305/30R20 rear), a good but not particularly aggressive street tire. Zero to 60 mph happens in 2.8 seconds. That's very quick, especially for a naturally aspirated car. Just to give you some context, the Huracan's obvious competitors -- the Ferrari 458 Italia and McLaren 650S -- both need 3.0 seconds. The normally giant-slaying Nissan GT-R NISMO hits 60 mph in 2.9 seconds. Granted, a Porsche 991 Turbo S is quicker, hitting 60 mph in 2.6 seconds. 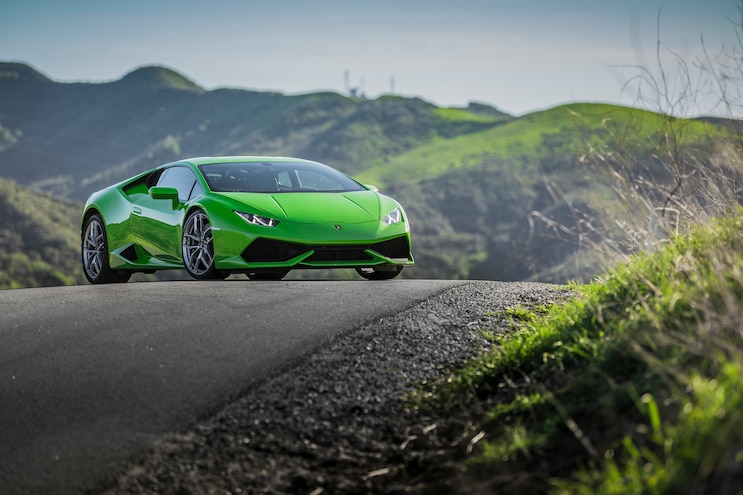 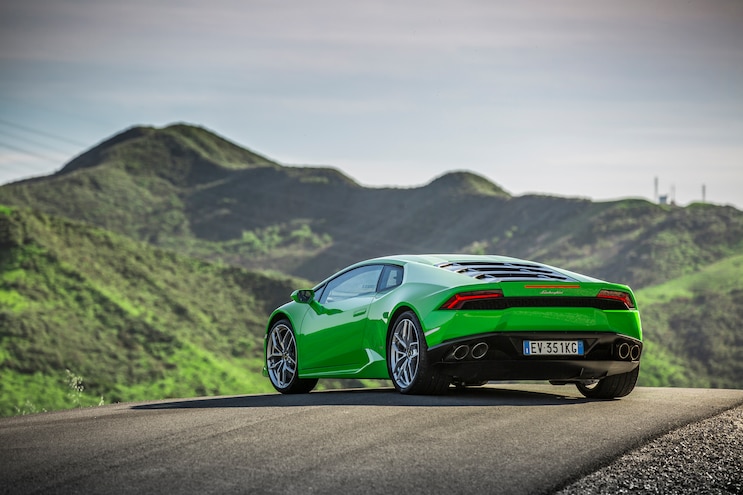 View Photo Gallery | 39 Photos
Photo 3/39   |   2014 Lamborghini Huracan Rear Three Quarter 02
As for other measurements, stopping from 60 mph requires a very average 104 feet. Randy noted that his only gripe about the Huracan was the brakes. Not necessarily the brakes themselves, but the ABS software that lets the tires lock up under hard braking. However, the McLaren 650S takes 105 feet, whereas the Ferrari 458 needs only 99 feet. The Turbo S takes 100 feet, and the NISMO needs 97. I should also mention that the other four cars were wearing much more aggressive rubber. That leads me to my next point, our figure-eight test. The obnoxiously green ($4,500 for the paint) Lambo requires 23.0 seconds to do the deed. The McLaren takes 23.1, the Ferrari takes 24.0, the Porsche Turbo S takes 23.0, and the Nissan GT-R NISMO needs 23.1. Had the Huracan worn tires like the others it would have easily broken into the 22s.
We wound up running the Huracan at Big Willow with Pirelli Trofeo Rs. Why? The P Zeros were pretty mangled after a day of testing (and mock testing for video). The only spare set of wheels we had was skinned in Trofeo Rs. The bad news? They're not a factory option. The factory optional tires for the Huracan are Pirelli Corsas or Corsa Rosas. Why did we have the wrong tires? I don't know. But we had to change them. So the result you're about to read gets a big fat asterisk next to it. Randy lapped Big Willow's bumpy 2.42 miles in 1:25.17. A blisteringly quick time. For instance, the McLaren 650S does it in 1:25.88. The NISMO does it in 1:25.70, and the Porsche takes 1:27.17. (We never tested the Ferrari 458 at Big Willow.) But yeah, cheater tires. Is it within the realm of possibilities that the person who purchases a $269,305 car might go down to Tire Rack and pick up a set of Trofeo R tires for track use? You betcha. However, consider this lap time more a guideline than an out-and-out result. The good news? We're getting a Huracan back and will retest at Big Willow with proper tires. 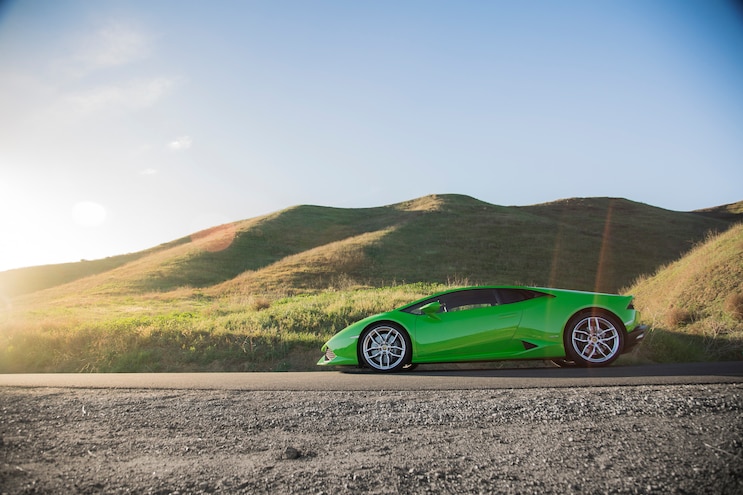 View Photo Gallery | 39 Photos
Photo 10/39   |   2014 Lamborghini Huracan Side Profile
As I often say, those are just numbers. I want to get back to the top, back to what Randy proclaimed. The Lamborghini Huracan is one of the three best performance cars I've ever driven -- the other two were the Ferrari 458 Italia and the Pagani Huayra. There's a part of my brain -- call it the Supercar Cortex -- that starts tingling when I get behind the wheel of something truly special. The Huracan lit it up like a supernova. Is the Huracan better than the other Italians? Impossible to say without driving the three back to back. But I will note that the 458 is basically out of production, soon to be replaced by the (turbocharged) 488 GTB, and the Pagani starts life at $1.75 or so million. 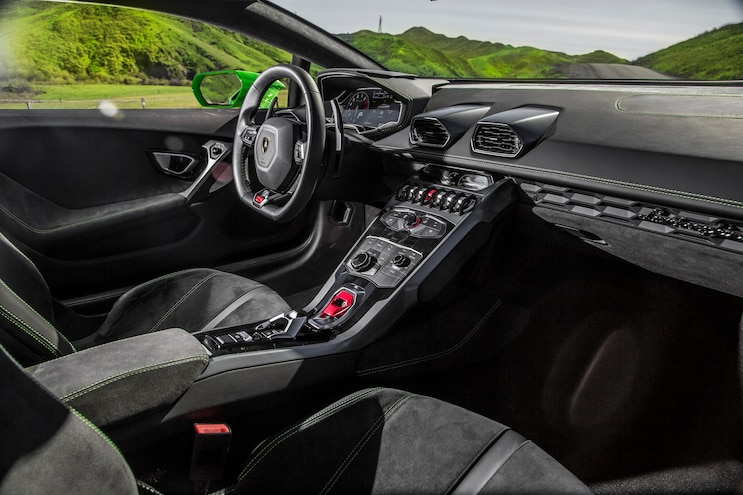 View Photo Gallery | 39 Photos
Photo 11/39   |   2014 Lamborghini Huracan Interior 02
Why is the Huracan so great? The glorious, naturally aspirated engine is part of it. This green monster didn't have the optional magnetic dampers. Instead there's a fixed suspension that beat me up at 75 mph on the freeway (especially after climbing out of a S65 AMG) but behaved near perfectly at 150-plus mph on the racetrack and even better when tearing up a back road. My gut tells me this is the suspension you want. This Huracan also didn't have Dynamic Steering, which sounds to me like something out of the Audi parts bin. After all, the Huracan is a mechanical twin of the Audi R8. I know I'll hear about it in the comments, but I've always hated Audi's adjustable steering. There's no good setting, and the wheel feels numb no matter what you choose. The Huracan's steering is so excellent that Randy didn't know the car was AWD until after his laps. I also think the thin, nearly cushionless carbon-fiber seats help overall performance by keeping the weight down.
The Huracan is the first Lamborghini that lives up to the promise of its striking, gorgeous design. When Ferruccio Lamborghini founded his car company in 1963, the idea was that his cars would not only be an alternative to Enzo Ferrari's prancing stallions, but would in fact be better. It's taken them 52 years, but now there exists a Lamborghini that is easily as good as the Ferrari it directly competes against. And if you believe Randy Pobst, the Huracan's better. 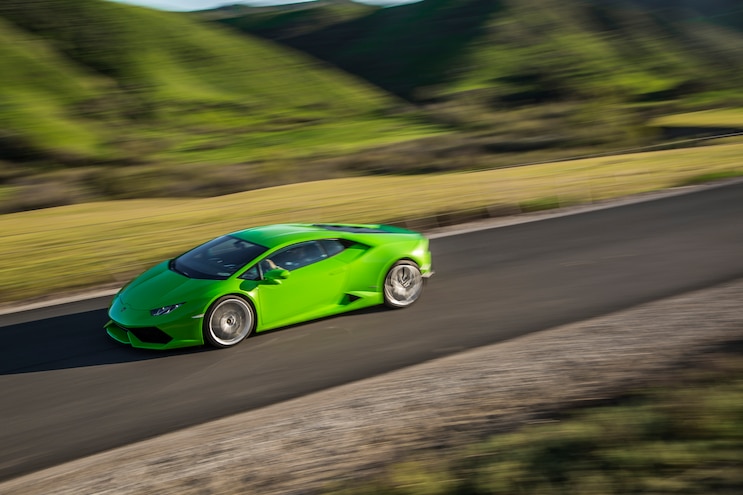