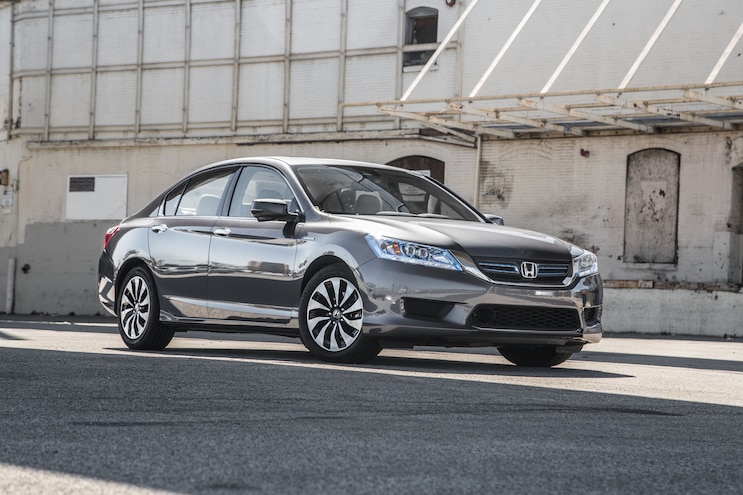 In my opinion, there are two features that quickly prove their worth on the Honda Accord Hybrid's Touring level.
First, the LED headlights shine brilliantly down dark roads, and their intensity never ceases to amaze me. After more than 10 months of LED goodness, it's hard reverting back (even briefly) to the conventional halogen lighting on other vehicles that come in for testing. My stance is because many drivers don't pay attention on the road, you might as well have LED headlights to illuminate the troublemakers ahead.
The adaptive cruise control is the second thing. The Accord Hybrid's ACC is not one of the best units on the market today. It occasionally speeds the car beyond the designated cruise mph for no apparent reason. It should respond more rapidly to vehicles that've cut in front of the car, slowing gradually instead of stabbing the brakes. It has sensed more than its fair share of phantoms, the nonexistent objects on the road that trick the ACC's radar into thinking there's something there. After a spook, it triggers the forward collision warning, cancels the adaptive cruise, and then the driver has to set the speed again. 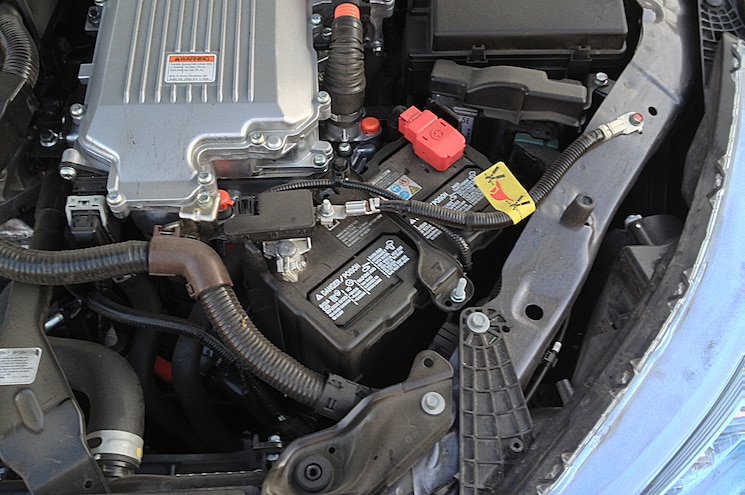 View Photo Gallery | 19 Photos
Photo 2/19   |   This is a typical lead-acid battery. Interestingly, it's bolted into the engine compartment. Every other new hybrid midsize sedan secures it in the trunk (inspection of the Malibu Hybrid pending). 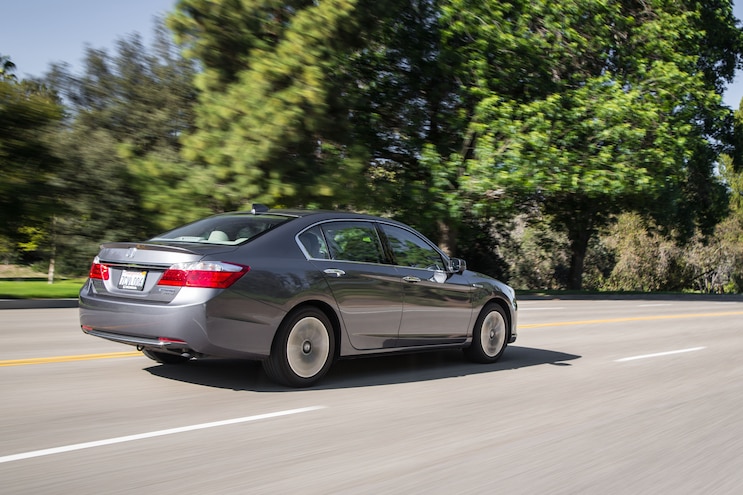 View Photo Gallery | 19 Photos
Photo 9/19   |   2014 Honda Accord Hybrid Touring Rear Three Quarter In Motion 02
Nevertheless, I often use the adaptive portion of the cruise control. It's reasonably alert and adds a slight feeling of safety on long highway drives. ACC can sometimes be overeager to slow down, but it hasn't yet made me feel like it's incapable of detecting actual obstacles. ACC's operational speeds are from 25 to 90 mph.
The feature most "worth it" on all Accord Hybrids is clearly the two-motor hybrid system with its ability to move the car without depending on a gas engine. Have you ever wondered what kind of fuel economy the hybrid system is worth? I have. To scratch the itch, I posed the inquiry to our pals at Emissions Analytics. They pulled up our long-term car's Real MPG test (46.8/41.6/44.3 mpg city/highway/combined to the EPA's 50/45/47), combed through the data, stripped out all instances of zero-emissions travel (where the hybrid battery powers propulsion), and recalculated the mpg. View Photo Gallery | 19 Photos
Photo 10/19   |   2014 Honda Accord Hybrid Touring Top View In Motion
The following numbers are just estimates. Emissions Analytics determined that shedding the benefit of engine-off, electric driving would drop our Accord Hybrid Touring's highway mpg to 36.5 (-5.1, still pretty good!) and the city number to 27.6 mpg (-19.2). The city mpg factors in approximated fuel consumption at idle (the car doesn't have a real idling fuel draw to incorporate), and it understandably takes a bigger hit compared to the highway figure. The findings remind me of a hybrid peculiarity: Newcomers to the hybrid domain might have to readjust their expectations because getting worse fuel economy on the highway swims against the automotive norm.
Lastly, the steering wheel creak at parking speeds reported in Update 3 has gone AWOL. I have to try really hard to hear it now. Two staffers who have taken the Accord Hybrid for several days apiece appeared puzzled when asked if they picked up on the creak. Neither did, and I'm not looking to make a mountain out of a molehill. 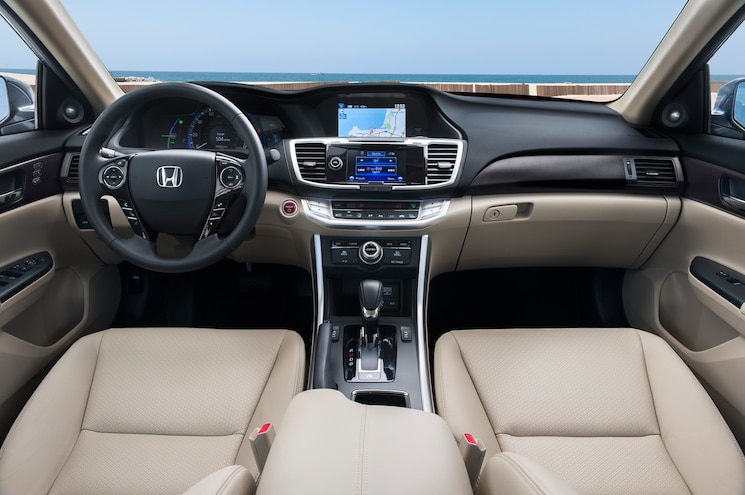 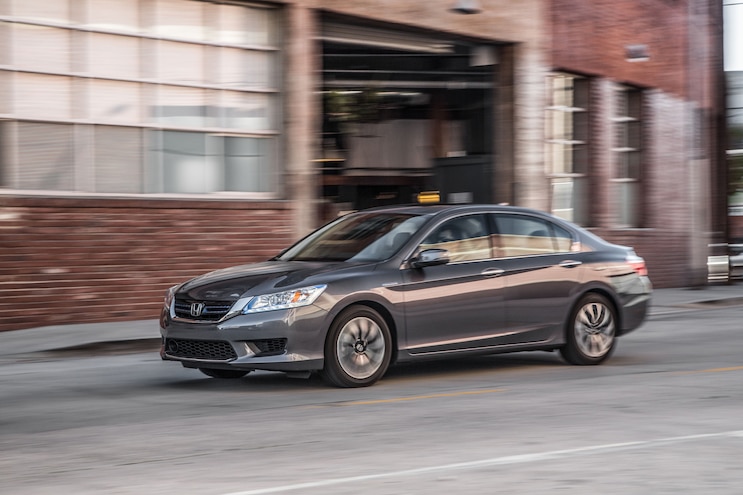 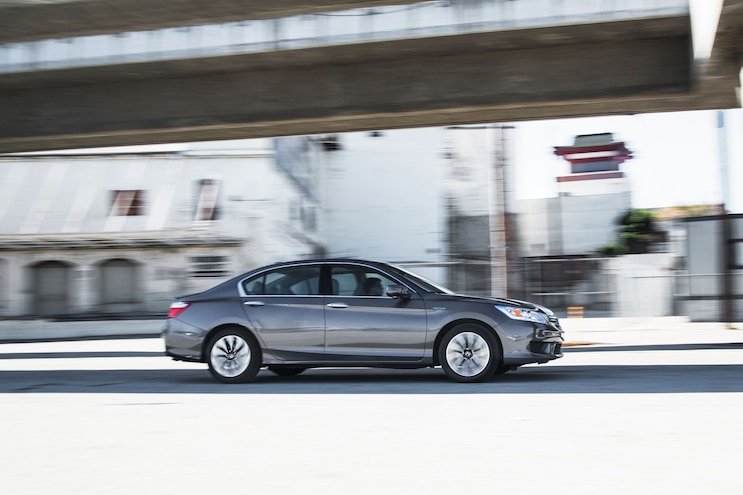