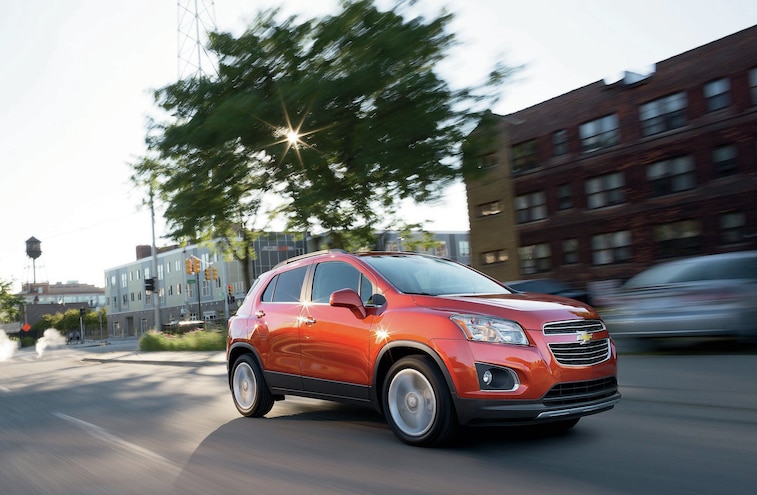 Chevrolet has jumped into the compact-crossover market in the U.S. with its recent introduction of the all-new ’15 Chevrolet Trax. The Trax has become a popular offering in Chevrolet’s global portfolio in over 66 markets since it was introduced in 2012 as a result of the world’s increasing demand for small SUVs. It’s a market that’s expected to grow to more than 2 million in the next few years. In America, the growth of this segment is estimated to increase by over 80 percent, with an expected six new entries by 2016. Chevy points out that it has introduced seven new small-sized vehicles over the past four years, and the city-smart Trax is one of its highlights.
What you’ll notice from the outside is the Trax’s tall-hatchback looks that are reminiscent of the Chevy Equinox. The front end is accented with Chevy’s signature dual-port grille and swept-back headlights, with chrome accents along the aerodynamic body. Fog lamps, roof rails, power sliding sunroof, and heated power-adjustable side mirrors are available as well. The Trax sits on a 100.6-inch wheelbase and has a planted and wide stance, with a 60.6-inch front and rear track. These dimensions not only bring an urban-runabout feel to the driving experience but also a tight 36.7-feet turning circle that enhances maneuverability and nimbleness in congested urban environments and helps make the Trax easy to park. A standard rearview camera helps here as well. 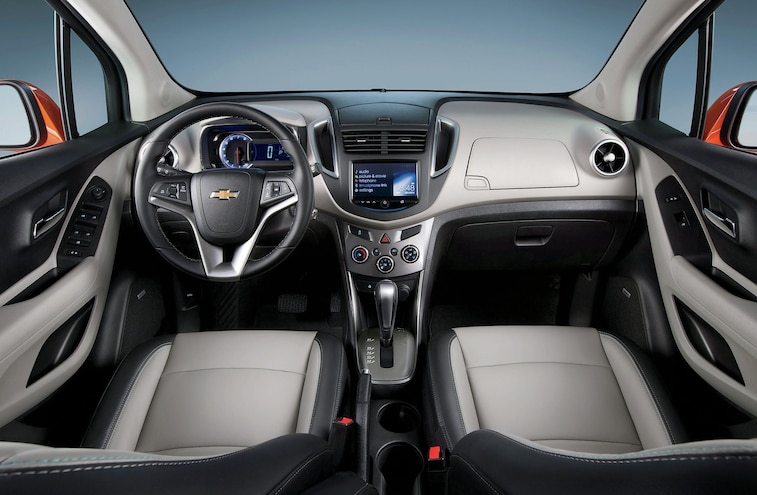 View Photo Gallery | 5 Photos
Photo 2/5   |   The Trax shares many of its interior styling elements from the Sonic subcompact, including the pod-like gauge cluster and the touchscreen display.
The Trax is powered by GM’s Ecotec 1.4L turbocharged engine that produces 138hp at 4,900 rpm and 148 ft-lbs of torque at 1,850 rpm and is matched to a six-speed automatic transmission. Chevy claims the combination will get the Trax to 60 mph in 9.2 seconds. Front-wheel drive is standard, with available all-wheel drive that enhances performance and adds confidence in slippery conditions. The automatically engaging system seamlessly splits torque between the front and rear wheels, when needed, to increase traction.
Our drive of the new Trax was filled with urban adventures that were designed to illuminate how the Trax is going to stand out in this emerging segment. One motoring route took us out of San Diego, California, along beach roads, parks and sports areas, where we saw a demonstration highlighting the storage capacity of the Trax with a surfboard and other athletic gear tucked in the cabin with the front passenger seat folded. During this 50-mile-long drive and a second 30-mile drive through a downtown cityscape, we tried out a number of the gizmos and gadgets that make the Trax a motorized entertainment system on wheels. 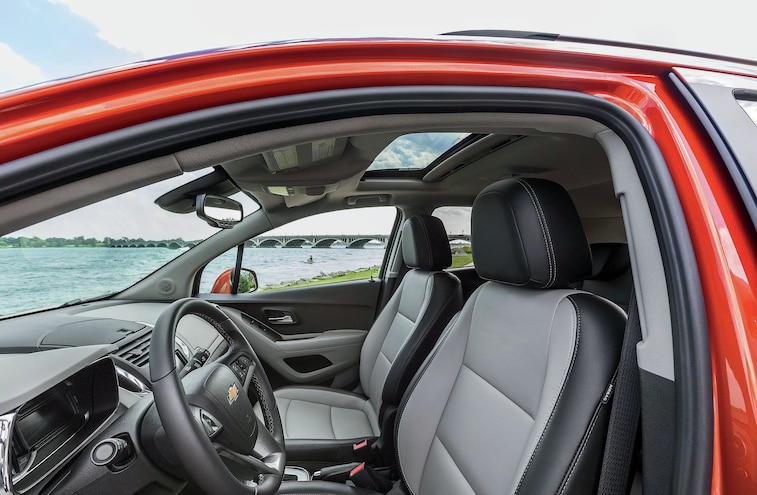 View Photo Gallery | 5 Photos
Photo 3/5   |   2015 Chevy Trax Ltz Awd Front Seats
Slipping on and off of busy freeways and navigating through heavy traffic, we appreciated the responsive handling, good steering, and compliant suspension. Engineers have used a MacPherson-strut front suspension system and a compound crank rear that make for impressive driving agility. Up front are coil springs, a large stabilizer bar, and side-load-compensated front strut modules, bringing ride comfort and sporty, direct responsiveness. The rear torsion beam setup incorporates gas-charged twin-tube shocks that provide a number of advantages, including minimal space requirements, low weight, and good control for the backend of the vehicle when motoring and carrying loads. Noise-damping urethane spring isolators help reduce noise and make a quieter cabin on the roadway. All models feature a fuel-saving column-mounted electric power steering system (EPS) that helps save fuel by drawing energy only when the steering wheel is turned. The EPS’s feel is light, yet direct, and enhances the vehicle’s maneuverability, particularly at low speeds and during parking.

View Photo Gallery | 5 Photos
Photo 5/5   |   Sharing a platform with the Buick Encore and the European-market Opel Mokka, the Trax is styled to resemble the larger Equinox crossover.