Living up to the Family Name 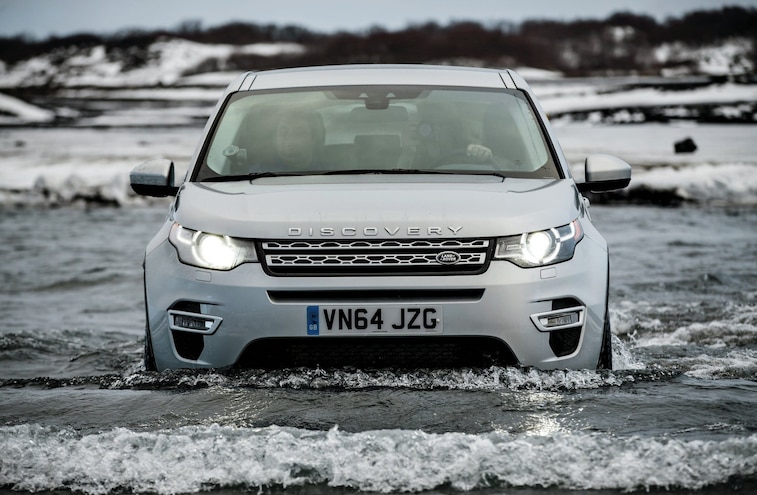 Land Rover was founded in 1948 and has specialized in building tough and rugged four-wheel-drive vehicles since. It should be no surprise then that when they set out to demonstrate the capabilities of the newest member of the family it would be in a locale fitting to the brand’s adventuresome heritage. Joining the lineup for 2015 is the all-new Discovery Sport, and what better place to prove that this compact SUV comes from the same bloodline of such greats as Defender than the barren, snow-covered hills of Iceland—in the dead of winter. 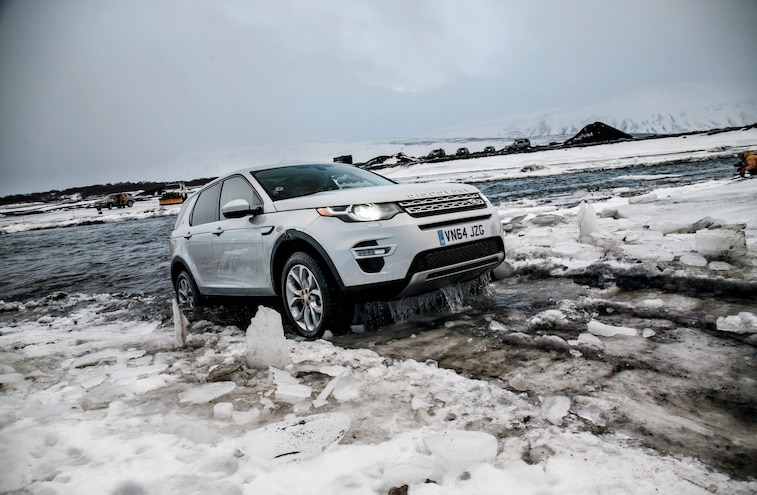 View Photo Gallery | 21 Photos
Photo 2/21   |   Excellent approach, departure, and breakover angles separate the Sport from others in its class. Though it lacks a traditional two-speed transfer case, the fifth-generation Haldex all-wheel-drive and Terrain Response systems work incredibly well for getting drivers through any obstacle Mother Nature may throw at them.
While the ’15 Land Rover Discovery Sport is more urban-oriented than its siblings, the plucky CUV didn’t shy away from any of the challenges presented by the rugged terrain of southwestern Iceland. The Discovery Sport is missing one important feature common to most other models of the brand: a low-range transfer case. However, it makes up for this lack of gearing with a sophisticated fifth-generation Haldex all-wheel-drive system (why anyone would buy the two-wheel-drive version is beyond us, but Rover does offer such a model) and a Terrain Response system similar to that of the larger Land and Range Rovers. Terrain Response tailors vehicle dynamics, such as steering sensitivity, throttle response, gear shifts, braking, and stability control, to the road conditions selected.
The Discovery Sport’s off-road prowess is also aided by high approach, departure, and break-over angles (relative to its class) and a sound suspension system. This extra clearance means that the new Sport can climb, clear, and descend obstacles that would leave its competitors trembling with fear. At all four corners the new Rover is fit with independent suspension crafted of lightweight aluminum bits. Torque vectoring by braking greatly enhances traction both on- and off-road. 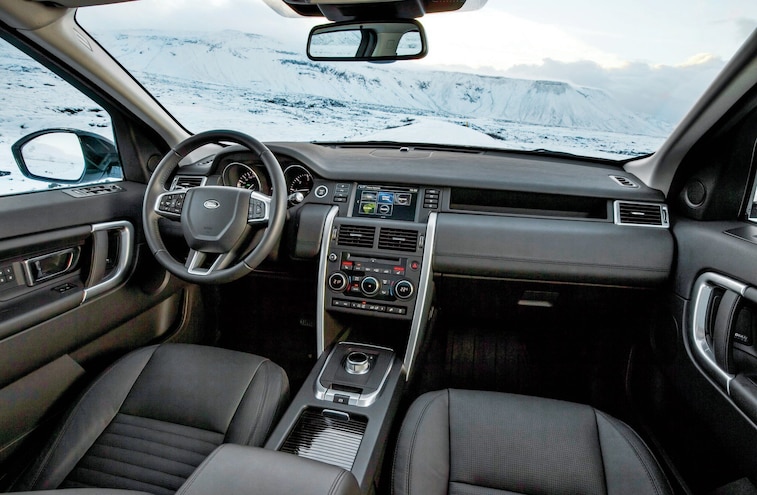 View Photo Gallery | 21 Photos
Photo 3/21   |   Standard room for five with optional seating for up to seven is unique to this class of SUV. Upper trim levels feature twin-needle-stitched leather accenting and Windsor leather seating. Configurable mood lighting, which is controlled via the 8-inch infotainment touch screen, creates a comfortable ambiance.
Powering the Discovery Sport is a peppy 2.0L turbocharged direct injected gasoline inline four-cylinder engine. This proven mill churns out a respectable 240 hp and 250 lb-ft of torque. As you would expect from a small-displacement engine such as this, it takes a bit of flogging into the higher revs to really experience the full output. However, once the turbo builds a bit of pressure and the tachometer starts to reach higher, the small SUV has no problem overtaking those less speedy. Throttle tip-in is excellent, mostly due to the fact that all 250 lb-ft of torque are on tap at a mere 1,750 rpm. A ZF-sourced nine-speed automatic transmission (think Jeep Cherokee) is mated to the engine and helps boost fuel economy to an EPA-estimated 26 mpg highway. Two diesel engine options are available to those living outside of the U.S., but we should be seeing one wash ashore in the coming years. 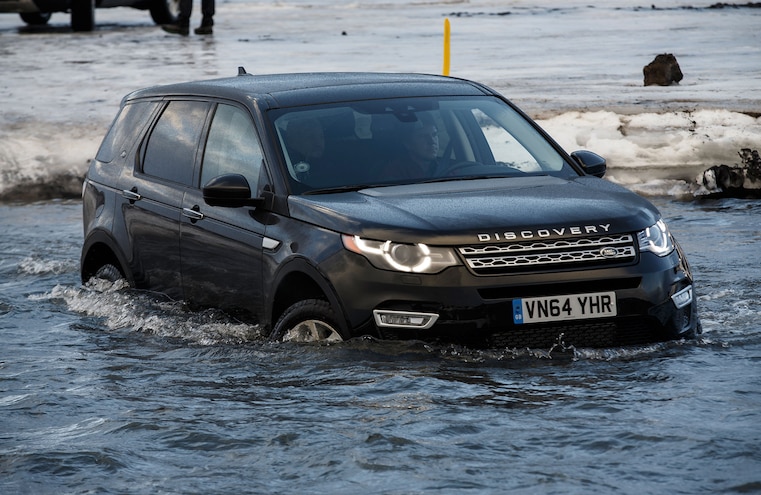 View Photo Gallery | 21 Photos
Photo 4/21   |   The new Discovery Sport has the ability to wade through water that is nearly 2 feet deep. On European models, sensors mounted in the mirrors indicate when the water level is getting too high. Why this feature is absent on U.S. models, the world may never know.
Land Rover’s designers nailed the Discovery Sport’s styling, inside and out. The interior is both contemporary and comfortable, while not being so opulent that you’re afraid to get it dirty (see Range Rover Sport). Standard is a panoramic glass roof, which adds to the roomy and open feeling of the Sport’s otherwise small stature. The dash is graced with an updated infotainment system that features a host of new technology. Unfortunately, it’s no easier to operate than those found in the rest of the Rover family and ultimately leads to frustration. Unique to this segment, the Discovery Sport can be optioned with a 5+2 seating arrangement. For those needing accommodations for seven, a pair of seats can be added at the factory in what otherwise would be the cargo area. While it’s a nice feature for those needing the space, the rear seats are hardly practical for anyone out of middle school. The exterior is sculpted with excellent proportions and short overhangs. While the 20-inch wheels on our tester were adequate, we were told those looking for a more off-road-friendly wheel package could fit the Sport with 18s. LED lighting is standard and adds to the Discovery Sport’s unique look while identifying it as pure Land Rover.
While our time with the new Discovery Sport was short, it did leave a lasting impression. Of all the compact SUVs we’ve driven, this was far and away the most capable. The fearless little adventurer got us into and out of situations that no soccer mom will ever find herself in. But rest assured, should the suburbs suddenly freeze over like the wild and barren tundra of Iceland, little Timmy will still get to practice on time. 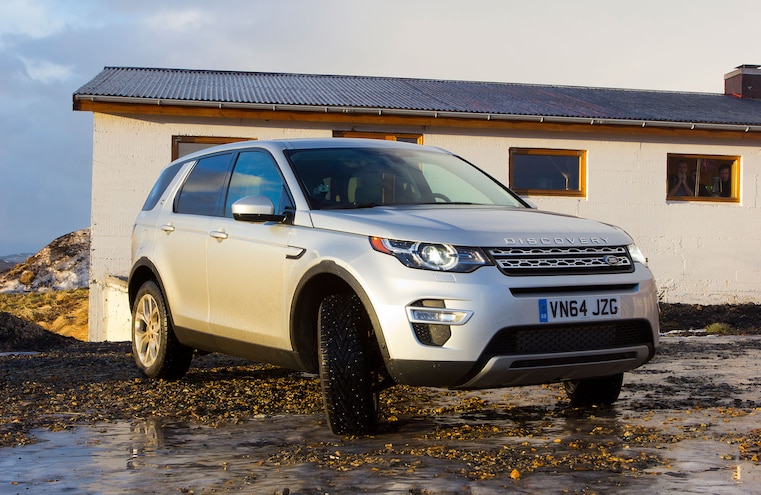 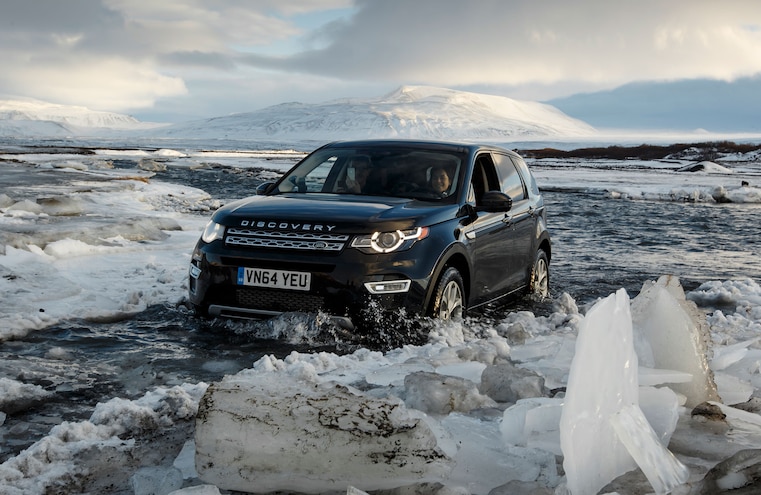