This Spice Girl Gets Even Hotter 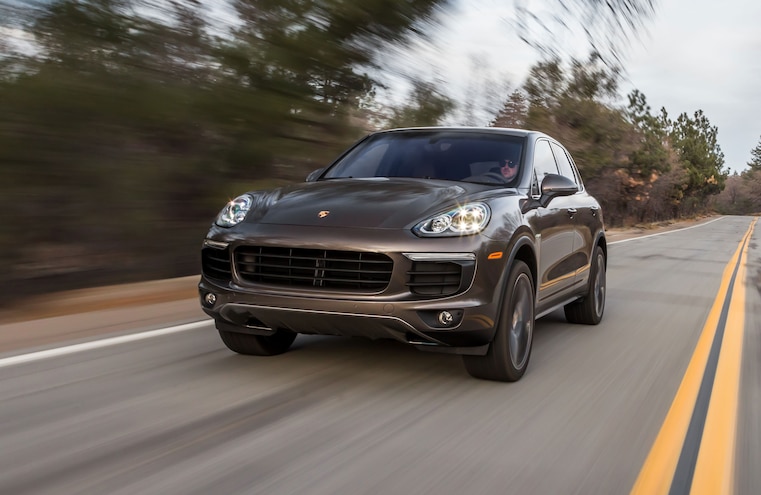 In San Diego, rush-hour traffic is never easy. However, the vehicle I was test driving along the bustling freeways of southern California made it as palatable as it could be until I could shed the city and head for the hills, where snaking tarmac two-lanes beckoned. I’ve been enamored with the Porsche Cayenne since it first came to market in 2002 as a 2003 model. The first V-8 engine built by Porsche since 1995, when the Porsche 928 was discontinued, powers this midsized luxury crossover marketed by the German marque known for exhilarating sports cars. 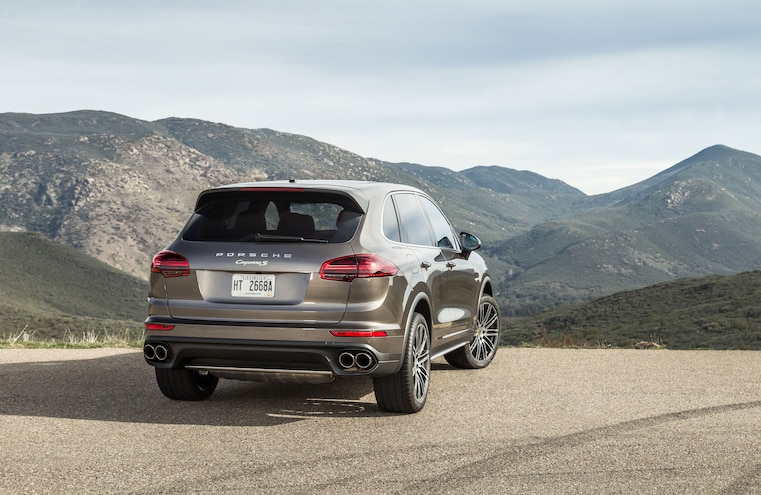 View Photo Gallery | 71 Photos
Photo 2/71   |   2015 Porsche Cayenne SE Hybrid
I remember my first drive in the 2003 Cayenne like it was yesterday: We started on a racetrack, where I was in a state of blissful shock when I hit three digits on the tarmac. The SUV handled like a sports sedan, hugging the corners with no head toss or body roll! Next, it was on to an genuinely rugged four-wheel-drive trail, where the Cayenne’s performance was flawless and beset with some Star Wars technology like Hill Hold (a system that was novel at the time), great off-road grunt and growl, and enough ground clearance to roll over ruts and rocks.
The Cayenne was built to meet the growing demand from high-end buyers who wanted it all and especially Porsche owners that wanted a vehicle with sporty looks, crisp handling, and invigorating power that would make their hearts race. But, at the same time, they needed enough space for a family and all of their assorted gear and a healthy dose off-road capability, in case it might ever be called into service. Enter the Cayenne--an anti-midlife crisis car! An SUV that allowed its owners to maintain the professional appearance of adult responsibility, while still retaining the ability to make their hair stand on end motoring a twisty ribbon of road or skirting through rush-hour traffic! 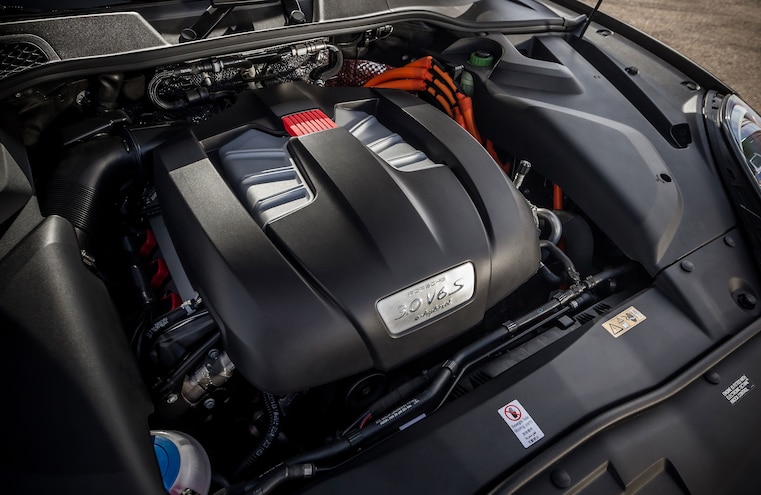 View Photo Gallery | 71 Photos
Photo 3/71   |   2015 Porsche Cayenne SE Hybrid
We drove two models of the newest Porsche Cayenne that has been updated with more power, improved handling, greater comfort, upgraded driver-assistance systems, and improved efficiency. Leading this effort, the 2015 Cayenne S E-Hybrid premieres as the world’s first luxury SUV with a plug-in hybrid drive, while the 2015 Cayenne S gets a 3.6L twin-turbo V6 engine that replaces the 4.8L naturally aspirated V8 engine. The other available engines have been upgraded as well.
Another of Porsche’s main goals was to give the Cayenne a more aggressive look, penned to better suit its sporty personality. Designers took a few pages from the new Macan’s styling handbook by adding enlarged air intakes on the front bumper, a rear spoiler, and LED daytime running lights across the entire model range. Additionally, the height of the rear tailgate has been raised, allowing the quad-exit tailpipes to be integrated into the lower valence of the rear bumper. These tasteful alterations give the newest Cayenne a wider and more anchored stance on the road, a significant improvement to the overly generic and rounded-off styling of the pre-facelift model. 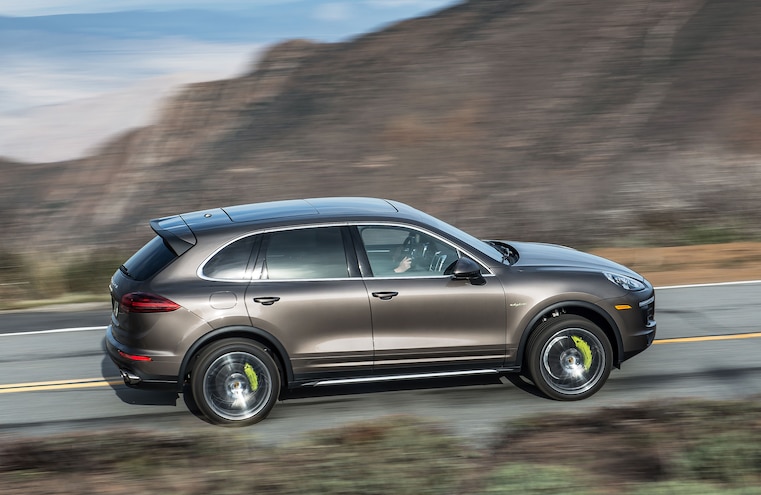 View Photo Gallery | 71 Photos
Photo 4/71   |   2015 Porsche Cayenne SE Hybrid
The interior remains largely unchanged, save for some added bolstering in the rear seats, as well as an elegant updated three-spoke sport steering wheel. The metallic wheel mimics the three-spoke in the 918, a reminder of Porsche’s sporting ancestry when you’re at the helm.
The new Cayenne will launch in the U.S. with four different versions, down from the previous model year’s stable of seven. Starting at an MSRP of $61,700, the 2015 Porsche Cayenne Diesel is an appealing combination of delectable Porsche handling, midsize-SUV usability, and space, as well as fuel efficiency with an EPA rating of 20 mpg city/29 mpg highway. While the 3.0L turbodiesel engine is only rated at 240 hp, it produces an impressive 406 lb-ft of torque, allowing the midsizer to go from 0-60 in 7.2 seconds (7.1 with the Sport Chrono package) and reach a top speed of 135 mph. Around town, the Cayenne Diesel acquires speed with ease without ever seeming stressed. It’s the Paul Newman of the luxury SUV world! 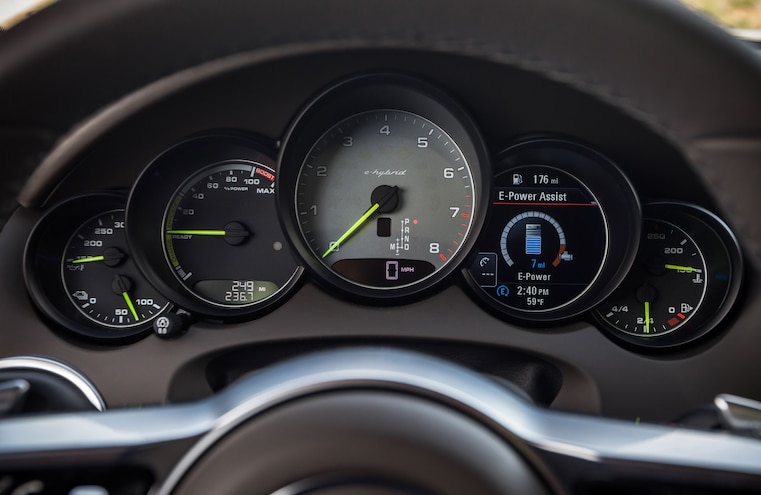 View Photo Gallery | 71 Photos
Photo 5/71   |   2015 Porsche Cayenne SE Hybrid
The 2015 Porsche Cayenne S E-Hybrid is more akin to Elon Musk, or at least a version of him that went to the gym more. With 416 hp and 435 lb-ft of torque, it bravely goes where no midsize luxury SUV has gone before: to your wall socket! With the launch of the E-Hybrid Cayenne, Porsche AG, known for its motorsports prowess and penchant for power above all else, now has more plug-in hybrids than any other carmaker. The Audi-sourced 3.0L supercharged V-6 delivers a respectable 333 hp, while the electric motor brings 95 more to the party. With a starting price of $76,400, it has an impressive 0-60 time of 5.4 seconds (0.7 seconds faster than the outgoing Cayenne Hybrid), a top speed of 151 mph, plus the ability to be run in electric-only E-Hybrid mode. However, while it can achieve speeds up to 78 mph in electric-only, its EPA-rated electric range is only 14 miles. Unlike most plug-in hybrids, which usually rely on a single-speed or CVT transmission, the Cayenne S E-Hybrid uses the same eight-speed Tiptronic transmission utilized by the gas engine. This makes transitions between electric and gas power seamless and makes motoring in electric mode a familiar, albeit less novel, experience. Another nice touch not often seen in hybrids is the progressive and predictable brake pedal, even with regenerative braking enabled. These technologies can trace their roots back to the $845,000 Porsche 918 Spyder hybrid hypercar. The updated three-spoke metallic steering wheel is there to help remind you of that sporting ancestry every time you sit behind the helm. In addition to the electric-only E-Hybrid mode, the car also has a selectable E-Charge mode that sacrifices fuel economy to recharge the Cayenne’s battery packs, as well as the no-holds-barred Sport Plus mode from the 918.
The 2015 Cayenne S starts at $74,100 and is powered by Porsche’s new bi-turbo V6 that runs with 420 horses and 405 lb-ft of torque, with best-in-class handling, says Porsche. Like its stablemates, it is set up with shift paddles and the S boasts racecar-spec automatic launch control and a 0-60 time of 5.2 seconds (5.1 with the Sport Chrono, 0.4 seconds quicker than the outgoing V8 model) and a top speed of 161 mph. While the potent 4.8L V8 may have disappeared from all of the naturally aspirated models, the joy of point-and-squirt torque from the new bi-turbo V6 in an SUV that feels like it has no right to be this quick and never failed to delight during our drive. 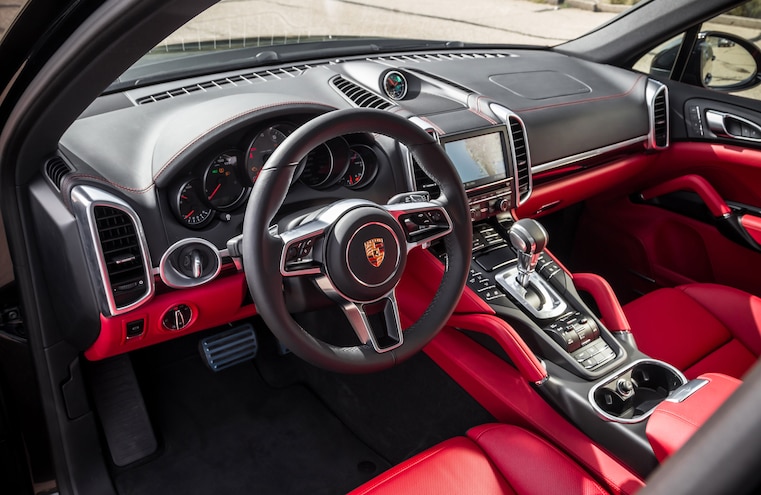 View Photo Gallery | 71 Photos
Photo 9/71   |   2015 Porsche Cayenne S
Top-of-the-line is the “no-compromise” driving experience and power of the Cayenne Turbo ($113,600) that has face-bending acceleration and 0-60 times of 4.2 seconds (4.1 with the Sport Chrono package). The V-8 bi-turbo has 520 hp and 553 lb-ft of twist and will rocket to a top speed of 173 mph faster than you can say, “I’m sorry officer.” Thanks to improvements such as active thermal engine management and active air intake air flaps, mileage for all 2015 Cayennes has risen across the board. Even the raucous Turbo will return a respectable 21 highway mpg rating. 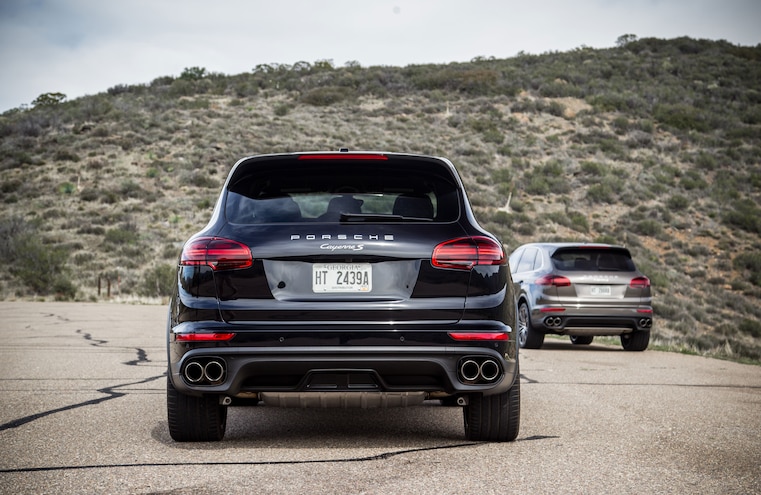 View Photo Gallery | 71 Photos
Photo 10/71   |   2015 Porsche Cayenne S
All Cayennes are equipped with adjustable air suspension for better ground clearance, as well as three different selectable modes for the adjustable PASM suspension and traction control to help you tackle a myriad of surfaces, wet or dry. The Cayenne S, Diesel, and Turbo models also receive added off-road capability through an electronically controlled variable rear differential with Porsche Torque Vectoring Plus. This system allows all of the differentials to be fully locked for serious four-wheel-drive traction. Combined with the virtual overhead view generated by the new-for-2015 optional Park Assist system, driving off road is an almost video-game-like experience.
The 2015 Cayenne is a fast Porsche that will carry your family, your dog, and your gear. Plus, it goes off-road! How spicy hot is that? 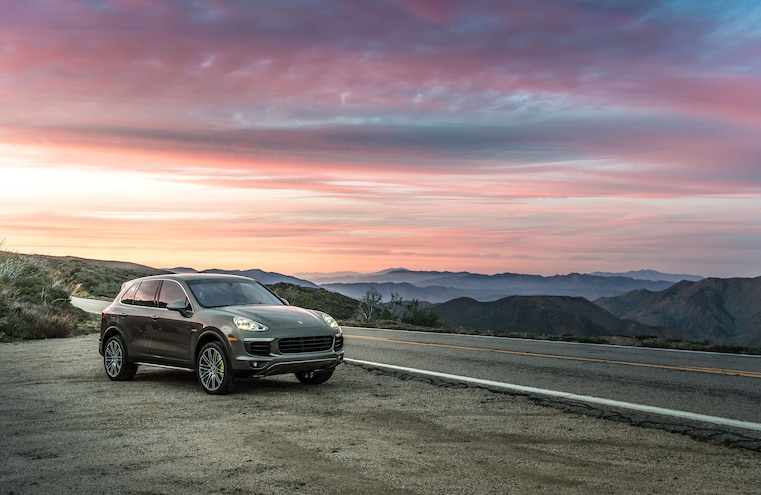