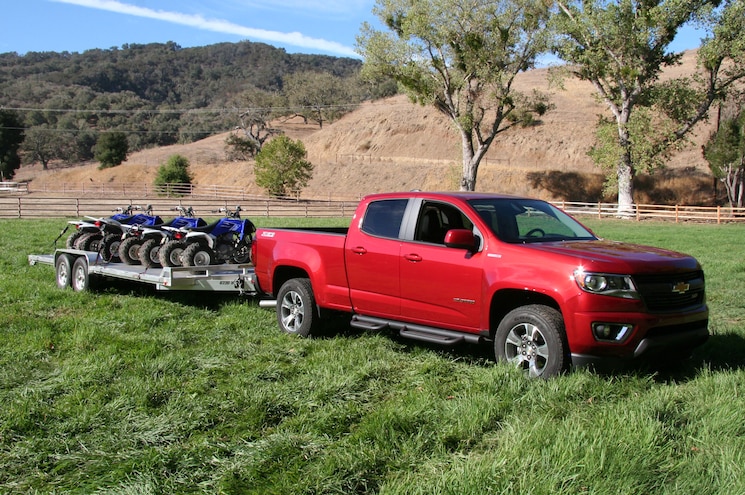 For the better part of the last two decades, diesel engines have been the exclusive reserve of HD trucks. Not since the ’80s has a diesel engine been offered in a compact or midsize truck, and not since the early ’90s in 1/2-tons until the Ram EcoDiesel. As soon as General Motors announced a diesel option would be offered with the redesigned Chevrolet Colorado and GMC Canyon, anticipation has been high for the engine option. Based on initial specifications, the engine offered the promise of both best-in-class fuel economy, as well as best-in-class towing capability. After our first drive of the 2016 Chevrolet Colorado diesel, we’d say GM succeeded.
Torque of the Town
When we drove the Colorado and Canyon last year as part of our Pickup Truck of the Year test, we loved the trucks’ nimble feel, modern, high-tech cabins, and garage-friendly size. However, many on staff felt the 305hp 3.6L V-6 was not the best fit for truck use. Although plenty powerful, the V-6 delivered most of its punch high in the RPM range, sometimes feeling flat-footed at low revs. The power and torque curves on the 2.8L I-4 Duramax diesel are the complete inverse. Low and mid-range torque is abundant, as expected of a diesel. Also characteristic of a diesel, there’s little reason to rev it past 3,500 rpm -- there’s just not much there. Indeed, the peak horsepower of the I-4 Duramax is the lowest of the Colorado’s three available engines at 181 hp. However, torque is the highest, at a V-8-like 369 lb-ft at 2,000 rpm. The sweet spot in the rev range of the engine is between 1,500 and 3,000 rpm. Diesel owners often speak of “riding the wave of torque,” and the saying is an appropriate description of the power delivery.
If you’re looking for outright speed out-of-the-box, the V-6 is probably the best choice, with a 0-60 time in the mid-to-high 7s. GM didn’t have official figures for the diesel’s acceleration times but said it would probably be around 9 seconds. However, in real-world driving, the Colorado diesel feels quicker than that figure would indicate, with mid-range acceleration and passing power being particularly impressive. Although many diesel enthusiasts say they enjoy the engine’s characteristic clatter, to appeal to a broader customer base, GM worked hard on the noise, vibration, and harshness (NVH) characteristics of this powertrain.
Putting a Damper on Things
Among the items employed to subdue the big four’s inherent vibration are a balance shaft, a centrifugal torque converter damper, and liquid-filled engine mounts. Although the 2.8L Duramax has been used in the global version of the Colorado for several years, GM said the NVH expectations of the markets in which that model is sold are generally lower than that of U.S. customers. The 2.8L Duramax is clearly a diesel at idle and under load but not objectionably loud under any conditions. At steady cruise, the engine note fades into the background. 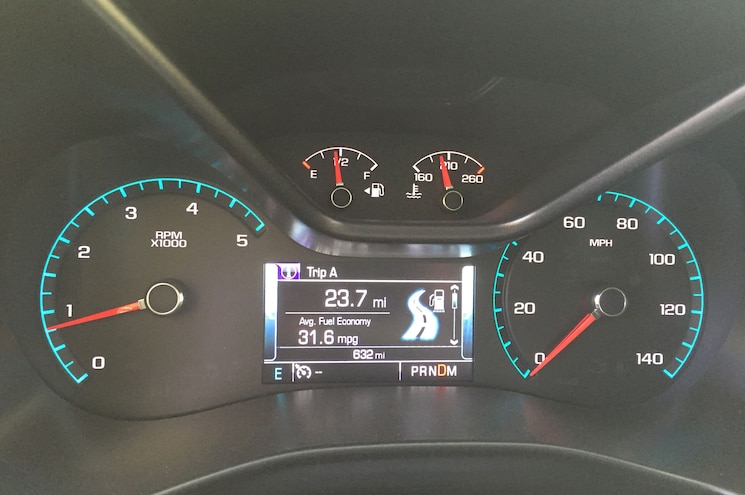 View Photo Gallery | 14 Photos
Photo 8/14   |   2016 Chevrolet Colorado Diesel Fuel Economy Gauge
The two big draws for the diesel option in the Colorado and Canyon are the dual attributes of capability and fuel economy. With a maximum towing capacity of up to 7,700 pounds, the capability is top-of-class in the midsize segment. While official MPG figures are still pending, GM representatives confidently predicted the trucks would be “the most fuel efficient pickups available in the U.S.” Based on our mixed driving loop of in-town and freeway driving, we averaged 31.6 mpg in a 2WD model. We expect the highway figure for both the 2WD and 4WD models to be north of 30. Equally, if not more impressive, was an indicated 20 mpg while towing a near 4,000-pound trailer. Also indicative of the diesel’s mission in life is an integrated trailer brake, which, as far as we know, is a first for the midsize market.
Pay Now, Save Later
While the capability and fuel efficiency of the diesel are indisputable, how midsize buyers will respond to the relatively steep $3,700 option price remains to be seen. For diesel enthusiasts and those that like the packaging and style of a midsize and want car-like fuel economy and near-fullsize capability, the option is a no-brainer. Chevrolet expects about 10 percent of buyers will opt for the diesel engine, which, for consumer-grade trims, is limited to LT and higher trim Crew Cab models. The engine will be available for fleet buyers in the more basic extended-cab configuration. Aside from the new engine option, the 2016 Colorado features Apple CarPlay and Android Auto integration, mirroring the mobile device experience on the dashboard.
Globally, diesel-powered midsize trucks aren’t the exception, they’re the rule. Whether you’re talking the Toyota Hilux, Ford Ranger, Volkswagen Amarok, or the global Colorado, the majority are sold with diesel engines. However, for the U.S. market, GM has the exclusive, for now. If or when Ford decides to bring the Ranger back to the states or Toyota decides to offer its Euro-6 compliant 2.8L I-4 diesel in the Tacoma, things could change. The prospect of a Cummins I-4-powered Nissan Frontier is also intriguing. GM seems to welcome the potential competition, while kindly reminding us that for now, the diesel option in the Colorado and Canyon is a class exclusive.