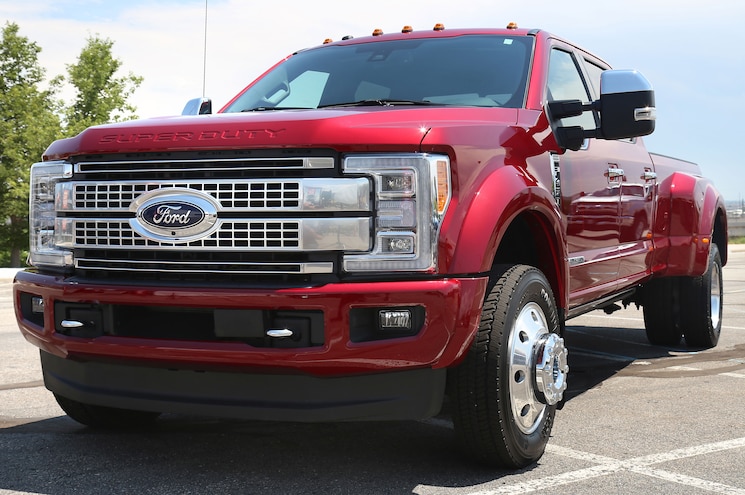 The Ford F-Series is about to reach a milestone as the best-selling truck in the U.S. for 40 straight years, a nearly unprecedented winning streak. For many months over the last few years, the F-Series has even outsold the Chevrolet Silverado and GMC Sierra combined. While the F-150 is the volume-seller in Ford’s truck lineup, the contribution of the Super Duty to the F-Series’ success cannot be denied. Ford does not publicly break out separate figures for the F-150 and Super Duty, but it is estimated that the Super Duty accounts for between 30 and 40 percent of total F-Series sales. So when it came time to redesign the standard-bearer of the “Built Ford Tough” brand, Dearborn knew it had a lot riding on it. Based on our first impressions and an explanation of the new hardware, we think Ford is in it to win it with the 2017 Super Duty. 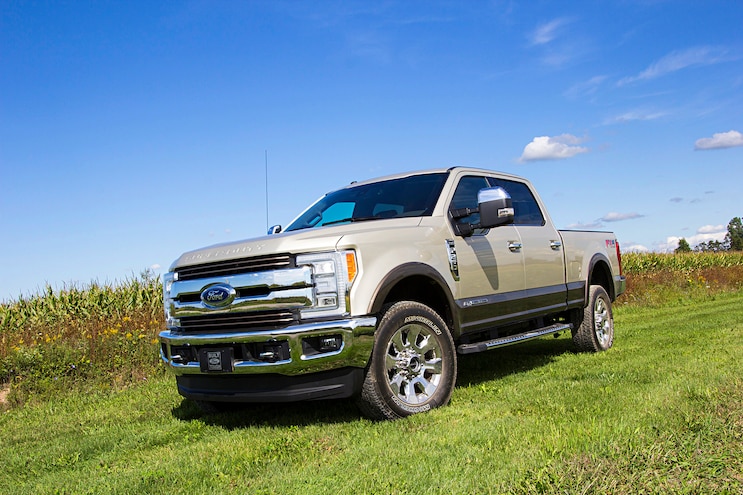 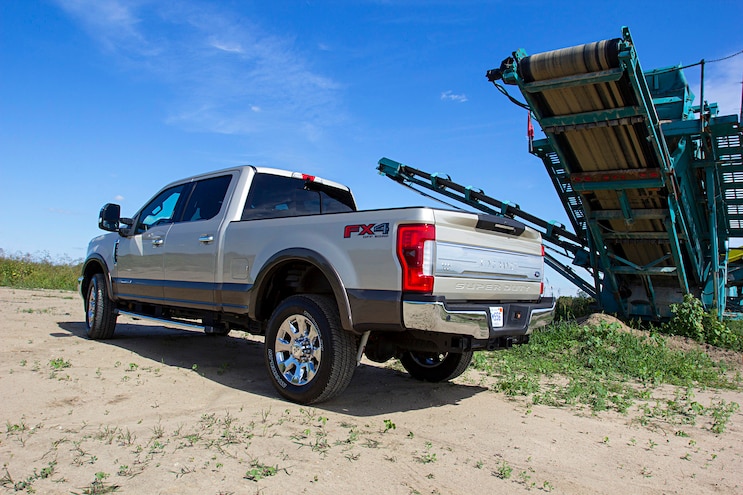 View Photo Gallery | 47 Photos
Photo 3/47   |   2017 Ford Super Duty F 250 King Ranch Fx4 Rear
Strategic Strength
Like the F-150, the 2017 Super Duty features a nearly all-aluminum body, the only notable exception being the engine firewall. Ford claims as much as a 350-pound weight savings over the previous model. You may note that’s only half as much as the claimed 700-pound weight savings of the F-150. Although everyone likes getting better fuel economy, it’s not as much of a factor in the Super Duty, as its more-than-8,600-pound gross vehicle weight rating (GVWR) means it’s exempt from EPA fuel economy reporting and does not factor into corporate average fuel economy (CAFE) standards. Secondly, Super Duty buyers care most about capability and durability. Ford notes that as many as 90 percent of Super Duty buyers tow with their trucks. So part of the weight savings of the aluminum body was reinvested into beefier components to add capability.
To provide a more solid foundation for towing and hauling, an all-new steel frame features 95 percent high-strength steel—six times more than the outgoing model. The frame is also fully boxed from front to rear, with the exception of chassis-cab models, which feature a C-section rear for ease of upfitting. The framerails are 1.5 inches taller than the last-generation model, and the frame features as many as 10 crossmembers for maximum strength. Ford also emphasized the Super Duty features thicker-gauge aluminum in the bed than the F-150, trying to mitigate any concerns about bed strength following GM’s opportunistic videos on the relative merits of steel. To better meet the buyer’s towing needs, the new Super Duty features a patent-pending modular hitch receiver adapter system that can accommodate from a 2-inch-diameter hitch all the way up to a 3-inch-diameter hitch with a set of inserts and different pins. For those who do fifth-wheel and gooseneck towing, a reinforced hitch subframe below the bed is available.
Towing Tech
Several new features make towing and hitching a lot easier as well. The new Super Duty parts ways with its little brother F-150 in its approach to towing features. Whereas the F-150 offers Pro Trailer Backup assist activated by a knob on the dashboard, which takes over steering function to aid reversing a trailer, the Super Duty takes a more hands-on approach, giving drivers visual aids and cues with Trailer Reverse Guidance and Straight-Line Backup Guidance. Like on the F-150, both systems utilize a “target” sticker the system uses to determine trailer angle. Trailer Reverse Guidance shows a projected trajectory with yellow and red zones for potential jackknife situations. For Straight Line Backup Guidance, the system gives the driver prompts to turn the wheel right or left to keep the trailer straight while reversing. We see both of these features as being useful for both towing rookies, as well as drivers more experienced with towing. In addition, with the available multi-camera setup, the third brake light–mounted camera can also be used to line up a gooseneck or fifth-wheel hitch in the bed, a process aided by the optional remote-opening tailgate, which can be actuated from the cab or with the key fob.
Speaking of towing capacity, Ford is claiming best-in-class towing and payload figures, up to 32,500 pounds on the F-450 with a gooseneck hitch, 21,000 maximum conventional towing without the need for a weight-distributing hitch, and 18,000 conventional on the F-250 with the trailer tow package. Maximum payload is 7,630 pounds on the F-350 dualie with the 6.2L gas V-8.
One of the most innovative features on the new Super Duty is a trailer tire pressure monitoring system, which can monitor and display the pressure of up to six trailer tires, or a three-axle trailer. The system consists of special valve stems and a wiring harness and requires an initial setup by the customer. Up to 10 trailer profiles can be stored in the truck’s memory for the reverse and backup guidance systems. The new Super Duty also offers a class-exclusive adaptive cruise control that remains active when towing, even on steep downhill grades, utilizing engine braking and grade descent control. One feature we were initially skeptical about that we came to appreciate was Ford’s new adaptive steering system. The system consists of a motor and gearset within the steering wheel itself that multiplies input to make low-speed maneuverability easier and actually reduces input at highway speeds when towing to make transitions more gradual and easily controlled. From behind the wheel, the system is nearly transparent, manifesting itself only by easier low-speed transitions with less arm flailing. The system is non-defeatable, but frankly, after experiencing it, we see no reason to disable it. Ford says the system has a built-in failsafe that locks the system into a direct mechanical connection if there’s any malfunction. 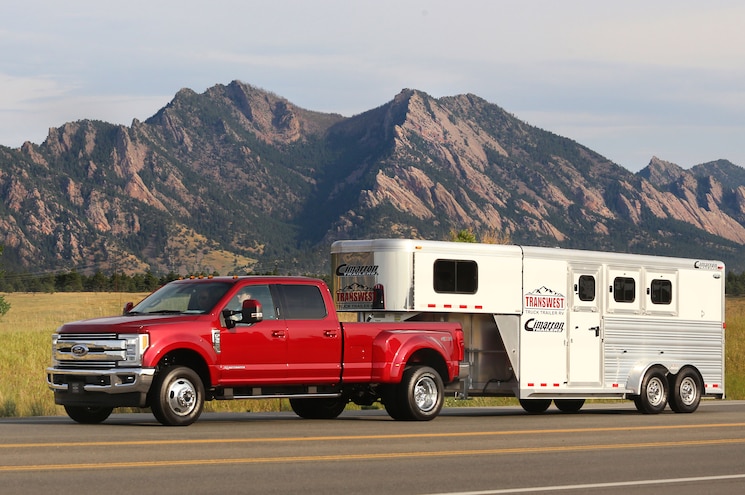 View Photo Gallery | 47 Photos
Photo 10/47   |   2017 Ford F 350 Super Duty Dualie Horse Trailer
Torque of the Town
As expected, the engines have been tuned for greater output for 2017. Horsepower for both the 6.7L Power Stroke diesel V-8 and the 6.2L gas V-8 are unchanged at 440 and 385 hp, respectively. However, torque gets a bump, with the diesel getting a 65–lb-ft boost to a staggering 925 lb-ft, and the gas engine going from 405 to 430 lb-ft. Honestly, it’s getting into the area of bragging rights at this point. The Power Stroke is torque-managed in the first three gears, so you’re not getting the full torque wallop until you’re well down the road. And none of us thought last year’s Power Stroke was underpowered at all. The torque boost on the gas V-8 is noticeable and makes it a respectable choice for the budget-sensitive customer who isn’t towing regularly.
The 6.7L Power Stroke was already class-leading for refinement and NVH, and the newest version raises the refinement bar even further. At idle, inside or out, the engine is remarkably quiet. Under acceleration or load, the engine’s sound makes it clear it’s a diesel, but the sound is so muffled and remote, it’s more a matter of sound quality than quantity. During the presentation, one of the trucks was started up to move in the morning. We had to do a double-take to figure out whether it was a gas or diesel model. While GM and Ram like to tout their “commercial-grade” powertrains with third-party-sourced engines and transmissions, Ford feels its in-house development and integration gives it the edge in refinement, ease of service, and uptime.
Another competitive advantage the ’17 Super Duty can claim is fuel and diesel exhaust fluid (DEF) capacity. The Super Duty offers a maximum fuel tank capacity of up to 48 gallons on longbed crew cab models, and a DEF tank capacity of 7.5 gallons, compared to 5.3 gallons for GM and 5.5 gallons for Ram. 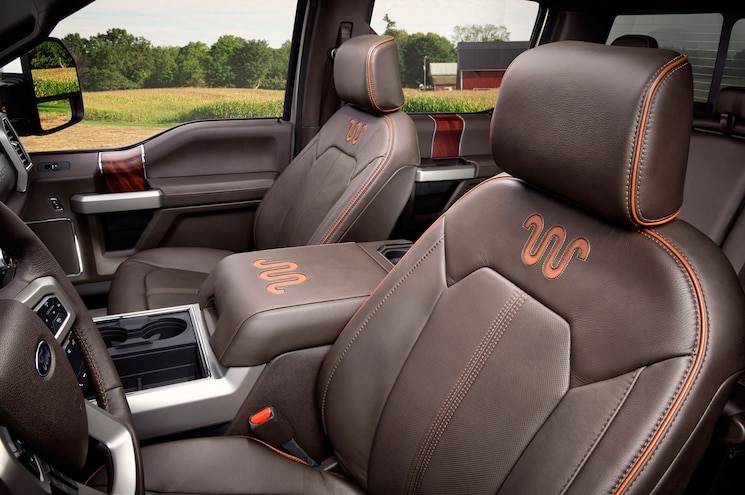 View Photo Gallery | 47 Photos
Photo 11/47   |   2017 Ford Super Duty King Ranch Interior
Common Cab
From the A pillars to the C pillars, the 2017 Super Duty shares its cab with the F-150. While that may seem like a step backward in size, it actually represents an increase in size from its predecessor in all cab configurations. This is the first completely all-new Super Duty body and chassis in 18 years. The commonality with the F-150 also makes future updates easier. The cabin of the new Super Duty offers a mind-boggling array of comfort, convenience, and productivity features that we can only touch the tip of the iceberg of in this review. Aside from the available multiview cameras that offer unprecedented front and rear visibility, Ford seems most proud of its configurable four-container convertible front cupholder that features a sliding upper piece that converts the driver side of the console into an additional cupholder for four spots total, excluding the two cupholders in the rear armrest of crew cab models. The number of auxiliary upfitter switches increases from four to six, including two dedicated 40-amp switches. All models equipped with the 8-inch Sync 3 system also feature Apple CarPlay and Android Auto capability built-in.
On the road, the new Super Duty raises the bar on refinement for the HD truck class. While we wouldn’t describe the ride quality as “cushy,” it’s one of the smoothest we’ve experienced with this class of truck, and NVH and road noise is impressively hushed. As noted, the refinement of the 6.7L Power Stroke diesel is nothing short of astonishing. The idiom of an iron fist in a velvet glove truly fits in this case. Ford has not yet officially released full-line pricing, but it did have pricing sheets for the demonstration models we drove. Figure the typically configured diesel F-250 crew cab in XLT or Lariat trim to go in the $60-65,000 range, with the higher-trim Platinum and King Ranch F-250s and F-350s going into the $70,000-plus range, cresting the $80,000 barrier at the top end. The Power Stroke Diesel alone adds around $9,000, so even a bare-bones vinyl seat, crank-window XL 4x4 will go for the mid-to-high $40s.
It took Ford 18 years to do a complete, clean-sheet redesign of the Super Duty, and the new model doesn’t disappoint. It sets a high bar for GM and Ram to crest with their HD trucks and will likely ensure Ford’s truck sales leadership for years more to come.