The marriage of beauty, agility, and refinement 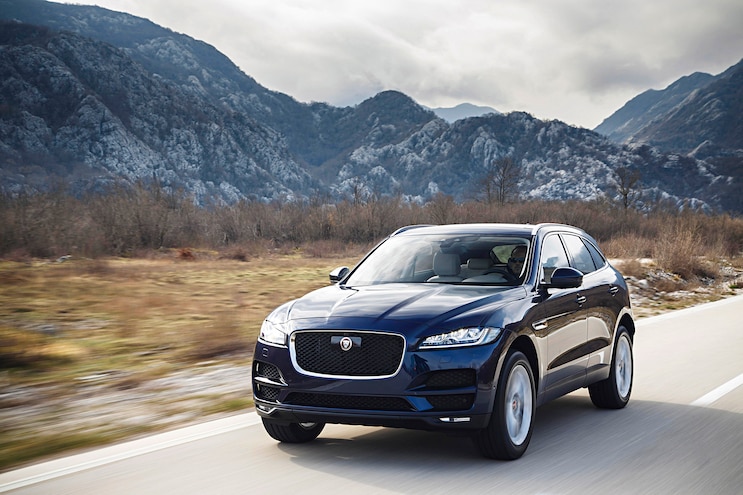 Some might have been surprised. We weren’t. When Jaguar strutted its stunning, high-performance C-X17 concept on the international auto show circuit, we knew we’d soon be driving an all-new SUV made by this luxury marque known for creating fast cats that, until now, have taken the shape of sports cars and sedans. Jag’s first sport ute enters into the hottest segment of the global market that has attracted not only all mainstream manufacturers over the past two decades but nearly every top-end luxury auto purveyor as well.
Pundits scoffed when Porsche introduced its performance SUV in 2002. Since then, the Cayenne has become a top performer in its lineup. Jaguar is predicting the F-Pace, with a wheelbase that slots between the Cayenne and Cayman models, will do the same. In fact, the automaker is anticipating the tall sports car, with wide proportions and the largest “trunk” of any Jaguar vehicle, will triple its sales in the U.S. market and will quickly become the automaker’s best-selling model. It will be the least expensive model in Jaguar’s lineup until the compact XE sedan arrives, and the British automaker hopes it move the marque from what many perceive as an older person’s brand to a hipper space in the market. Jag says to think of it as a James Bond car that will appeal to millennials. 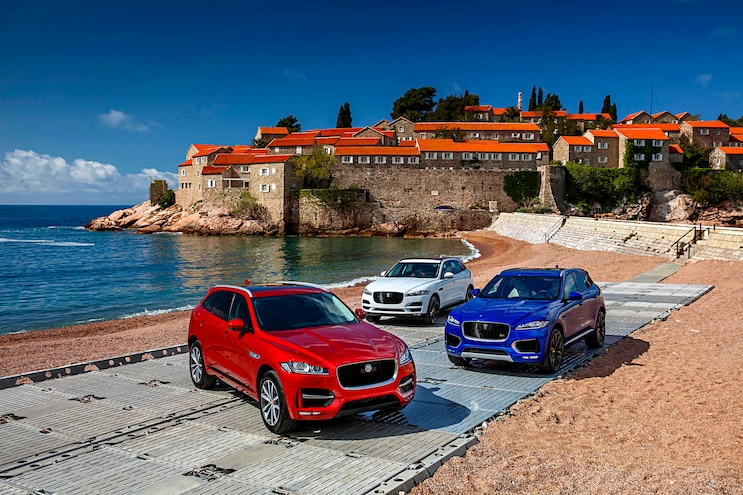 View Photo Gallery | 48 Photos
Photo 2/48   |   005 2017 Jaguar Fpace First Drive
Motivated by its standard all-aluminum 340hp 3.0L V-6 and torque-on-demand all-wheel drive, F-Pace has top speed of 155 mph and 0-60 time of 5.4 seconds. An optional 380hp powertrain drops the 0-60 time to 5.1 seconds. Powertrain options include the aforementioned high-performance 380hp version of the V-6 and a 180hp 2.0L I-4 turbodiesel that will come later in the year. All engines are mated to an eight-speed automatic transmission with manual shift control and steering-wheel-mounted paddles. Top towing capacity is rated at 5,290 pounds. In addition to its all-aluminum engines, aluminum is used throughout the chassis in an effort to keep it as svelte as possible, tipping the scales at just more than 4,000 pounds.
The F-Pace exterior strikes a highly nuanced and sensual silhouette with a sleek roofline. An assertive grille and Jaguar’s iconic power bulge on the hood punctuate the front. There are short front and rear overhangs, with front wheels teased forward and muscular rear haunches, a steeply raked rear window, and elegant LED rear taillights. Five trims for top-engined models and four for the 35t and diesel models will be available: F-PACE, F-PACE Premium, F-PACE Prestige, F-PACE R-Sport, and F-PACE S levels, ranging from $40,990 to $56,700 without destination. 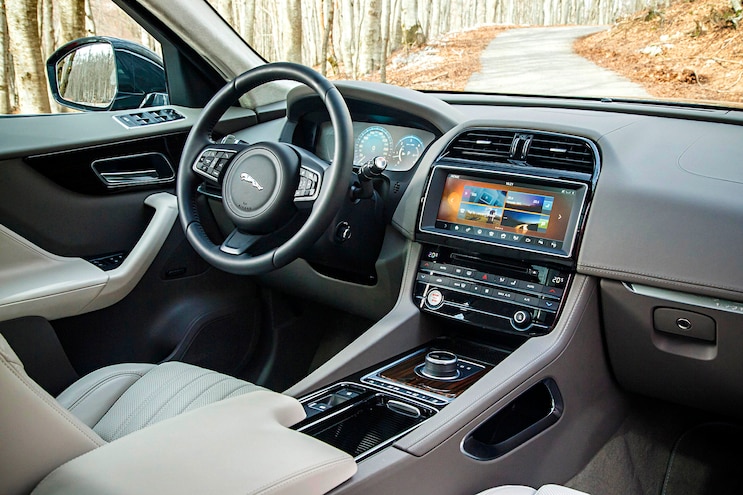 View Photo Gallery | 48 Photos
Photo 3/48   |   030 2017 Jaguar Fpace First Drive
The interior persona of the five-seater speaks to luxury, comfort and convenience with a “Sports Command” driver’s cockpit as a focal point. The cabin is bright and airy and is adorned with premium materials, like real metal, hand-crafted wood veneers, and ambient lighting. The instrument panel features two analogue dials with a central TFT display or an optional 12.3-inch virtual cluster featuring a selection of four visual themes and full-screen navigation. The 40/20/40 split rear seats allow through-loading, where there is 33 1/2 cubic feet of stowage behind and up to 63 1/2 cubic feet when the second-row is folded flat. Jag says its rear legroom leads the class.
The pulse of F-Pace communications and infotainment come from its standard InControl Touch system with an 8-inch screen. An optional InControl Touch Pro connectivity system comes with a 10.2-inch screen that can be customized with apps and widgets. The onboard Wi-Fi connection with access to location-based navigation allows the system to determine whether there's sufficient fuel to complete the journey.
Onboard are state-of-the-art safety and convenience technologies, such as a color head-up display, autonomous emergency braking with pedestrian detection, lane departure warning and lane keeping, blind spot monitor and reverse traffic detection, a driver fatigue sensor, semi-automatic park assist for parallel and perpendicular parking maneuvers, and adaptive cruise control with queue assist. An available Traffic Sign Recognition system uses the stereo cameras to read traffic signs and to keep the driver informed via the instrument cluster (or head-up display, if equipped) of speed limits, including temporary speeds that might apply in road construction zones. An intelligent speed limiter can also automatically monitor vehicle speed to match the posted speed limits. 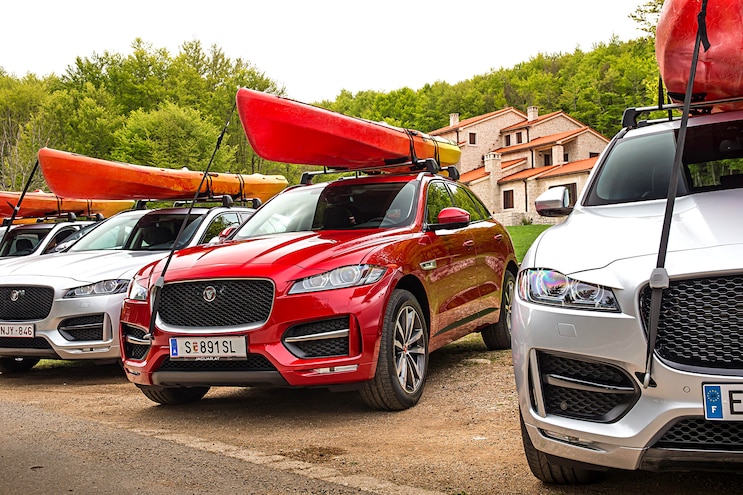 View Photo Gallery | 48 Photos
Photo 4/48   |   017 2017 Jaguar Fpace First Drive
The F-PACE also debuts Jaguar's new “Activity Key,” a water- and shockproof wristband that allows the keyfob to be locked safely within the vehicle for owners that want to participate in wet and/or active sports, such as surfing or kayaking. When locked using the Activity Key, the system will disable keyfobs left inside. The Activity Key works on the same RF frequencies as the other keys and can lock and unlock the vehicle by holding it in close proximity to the “J” of the Jaguar lettering on the tailgate.
Engineered for light-to-moderate backcountry travel, the F-Pace also has prowess when the pavement ends. The front subframe and suspension set-up aid in chassis stiffness for both on-road and off-pavement travel and provide for supple wheel travel, while low-speed cruise control technology, borrowed from its Land Rover brethren, allows the F-Pace to climb and descend steep mountain roads with little to no driver input on the throttle or brake. It also has a competent Adaptive Surface Response system borrowed from Land Rover that gives slow and mannered crawl control and off-road dynamics that keep it from getting hung up on rocky bits or getting mired in mud troughs. Good approach and departure angles help as well, as does as an impressive ground clearance of 8.4 inches. 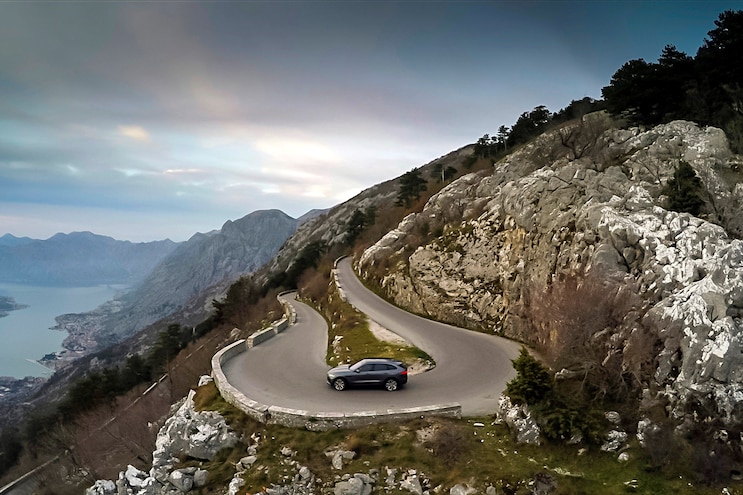 View Photo Gallery | 48 Photos
Photo 5/48   |   006 2017 Jaguar Fpace First Drive
Jaguar's Adaptive Dynamics system monitors the vehicle’s body movement 100 times per second to adapt suspension damping according to road conditions. When paired with Configurable Dynamics, the system allows the driver to select dynamic or normal modes for throttle mapping, transmission shift strategy, steering feel, and adaptive damper setting, all using the central touchscreen.
We drove the new F-Pace over a course of more than 200 miles along a varied collection of roads in Aman Sveti Stefan, a charmed coastal village resort in Montenegro, which included narrow and twisty mountain passes with both good and poor surfaces. The sports-minded crossover was unshakable in its drive and was comfortable and quiet in all settings, with fast-moving and highly responsive performance when indulged. We especially liked the heavy-weighted, linear steering and impressively agile suspension tuning. Its aluminum architecture and rear-drive-biased platform give it a light-on-its-toes feel that has been patterned after the F-Type. A press of the throttle is rewarded with a seductive and addictive exhaust note, and we were grateful that the two-ton ute stops in a confident demeanor with tall brakes. 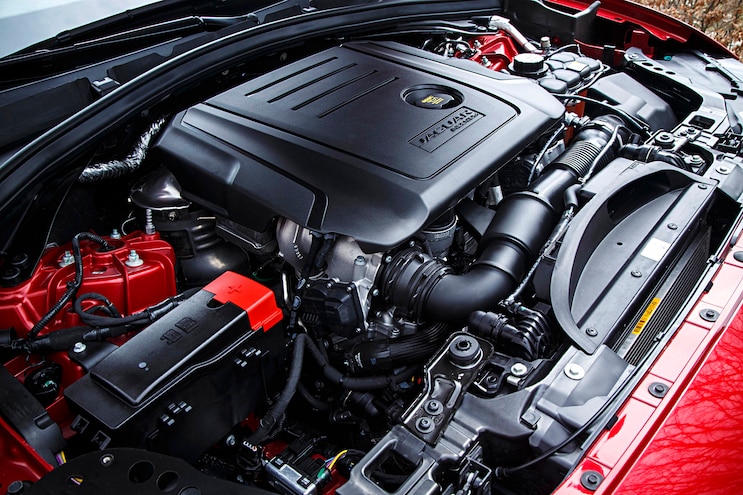