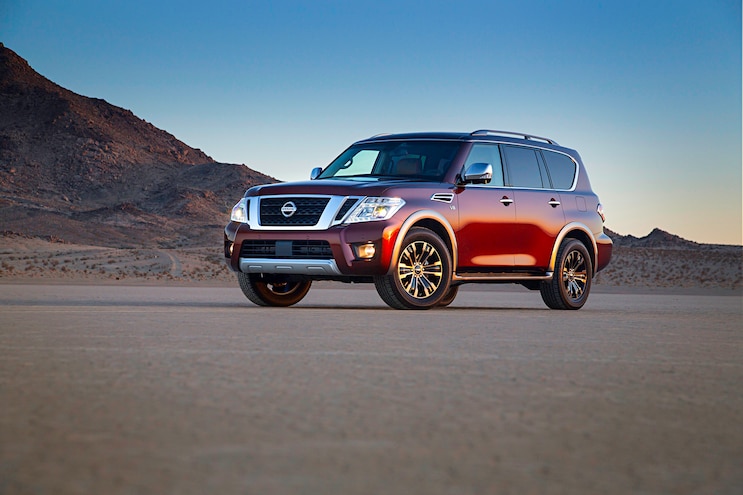 The first-generation Nissan Armada, as we currently know it, was born in 2003 as an ’04 model. Originally named the Pathfinder Armada, the biggest of Nissan’s SUVs became simply known as Armada a year later. A mid-cycle refresh came about in ’08, and trim levels were introduced and retired frequently. Though sales remained respectable, 2015 brought a year of uncertainty as to the Armada’s future, with Nissan first announcing that the second-generation Armada would be based on the next-generation Titan chassis and then following that with another announcement ambiguously stating that the future of Armada was undecided. It was a nervous time for lovers of this starkly beautiful fullsize ute. 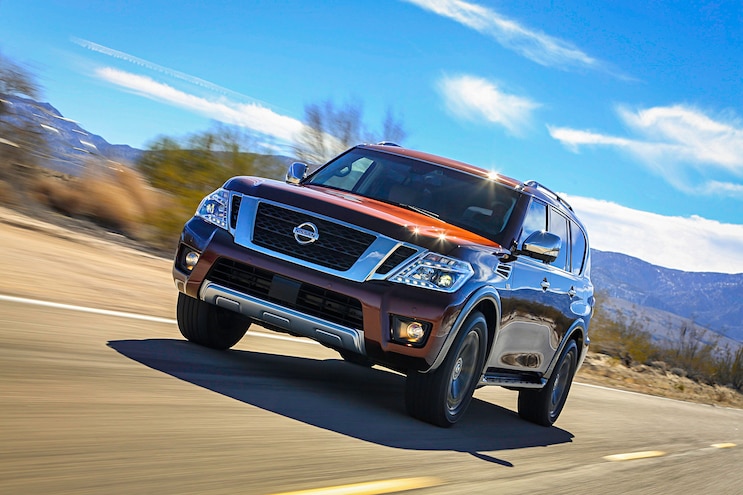 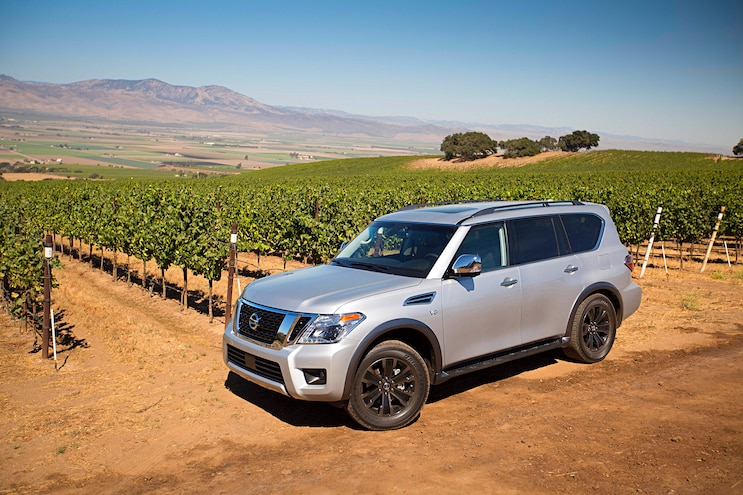 View Photo Gallery | 34 Photos
Photo 3/34   |   2017 Nissan Armada First Drive Review Vineyard
Then it happened—the moment fan boys around the world had been waiting for—at the 2016 Chicago Auto Show: the cover was pulled off the all-new ’17 Nissan Armada, and it was everything we hoped it could be. No longer would the Armada be Titan-based. Instead, the second-generation would move to the legendary Patrol chassis. Known worldwide as a Dakar Rally champion, sand dune hero, and off-road legend, the Patrol has some serious pedigree. Unfortunately, on it’s trip over from Kyushu, Japan, the ’17 Armada loses some of the bits that make the Patrol what it is. Locking differentials aren’t available, nor the disconnecting sway bars or cross-linked hydraulic suspension. It’s a decontended Patrol, sure, but it’s a Patrol nonetheless.
For the U.S. market, the second-generation Armada more closely mirrors Infiniti’s QX80, which has been on sale stateside since the ’11 model year. Though in regards to the Patrol and QX, one might think that the platform is growing a bit long in tooth, but when it comes to Armada this is a very welcome step forward. As you may recall, we at Truck Trend had a ’14 Armada Platinum Reserve in our long-term fleet for a year, and we grew very fond of it. So for us, getting the opportunity to finally jump behind the wheel of the new ’17 model was a real treat. 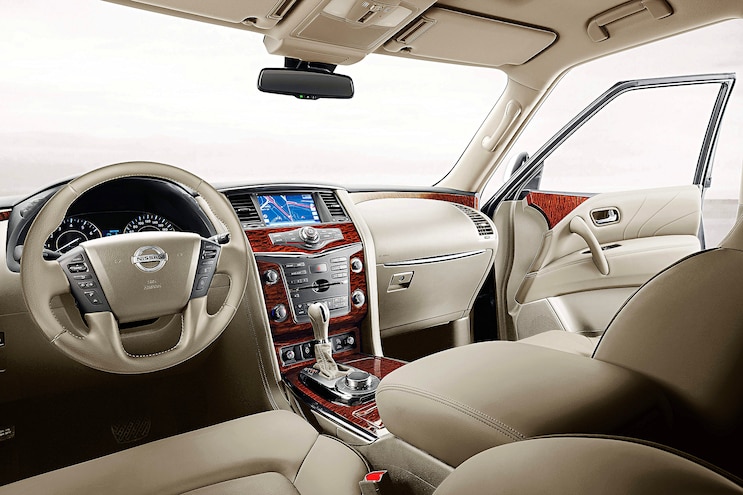 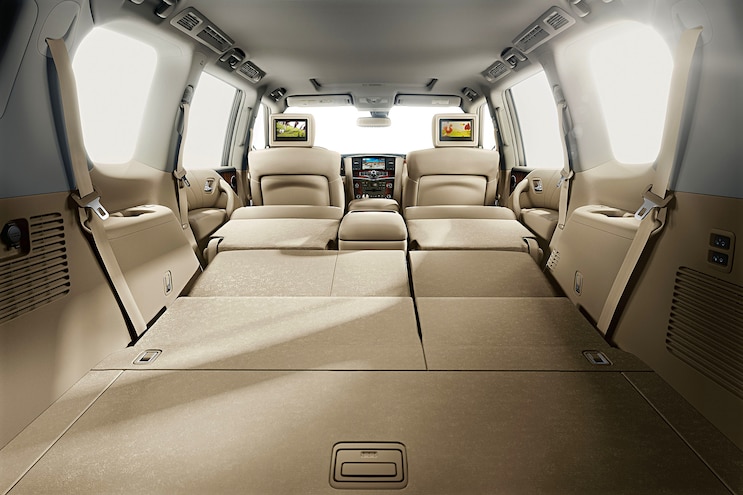 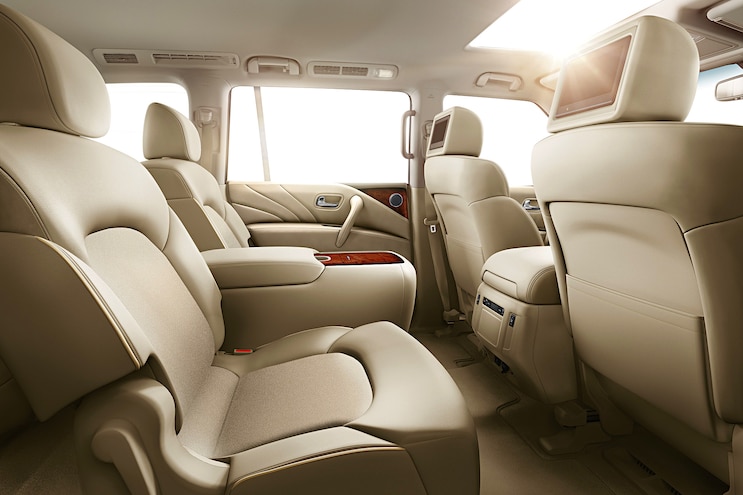 View Photo Gallery | 34 Photos
Photo 6/34   |   2017 Nissan Armada First Drive Review Interior
The ’17 Armada will be available in three trim levels: SV, SL, and Platinum (gone is Platinum Reserve, which is now earmarked for Titan and Titan XD). However, Nissan only had Platinum-trimmed four-wheel-drive versions available for us, which was quite all right. If you’ve spent any amount of time in the QX80, then slipping behind the wheel will feel like déjà vu. This isn’t to condemn the Armada—rather it’s a reflection of the notion that Nissan buyers don’t cross-shop Infiniti and vice versa, ultimately making the Armada Platinum one of the best-kept secrets among fullsize luxury SUVs. Supple leather seating and soft-touch material encapsulate the occupants, while accents of faux wood and chrome adorn the instrument panel and center console. Seating for eight is standard while middle row captains chairs are optional, reducing seating to seven. The front and middle rows are quite comfortable for passengers of all sizes, but as you would expect even in the girthy Armada, the third row is best left to the kids. Cruising down the road, the first thing you notice is how quiet Nissan has been able to make the cabin. That isn’t really surprising given the emphasis automakers are putting on eliminating discernable noise, vibration, and harshness these days. The Armada rides like you would expect a nearly 3-ton body-on-frame SUV should, with comfortable and confident handling more akin to a modern 1/2-ton pickup than a luxury SUV. Highway cruising is effortless, and the Armada is no slouch on twisty roads either, sticking to the corners tight enough to make both second and third row passengers a bit queasy. Power delivery from the new-to-Armada direct-injection VK56VD 5.6L Endurance V-8 is swift yet controllable. Horsepower jumps from 317 on the outgoing model to 390 for the second generation, which is down from 400 in the Infiniti due to tuning for regular versus premium fuel. A smooth-shifting seven-speed Jatco automatic transmission delivers power to the axles, up from five cogs in the outgoing transmission, and the combination allows for an EPA estimated 14 city, 19 highway, and 16 combined mpg—subtract one from that for the four-wheel-drive models. 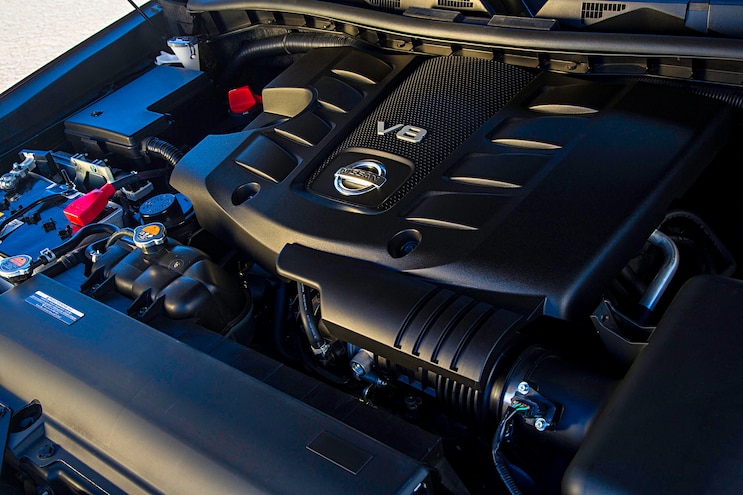 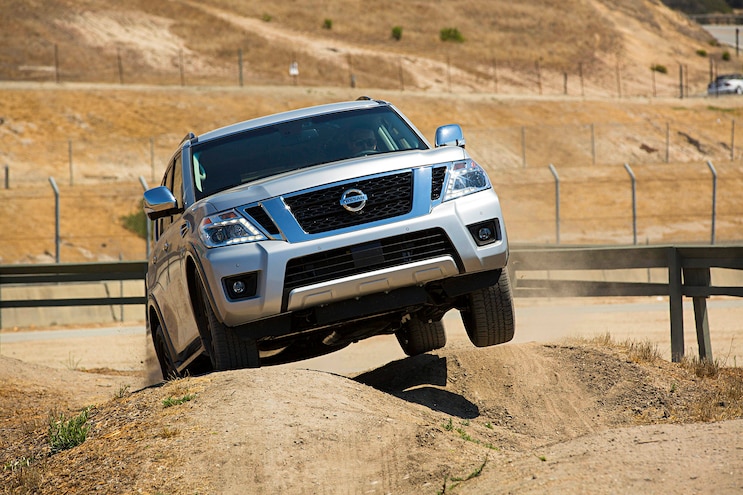 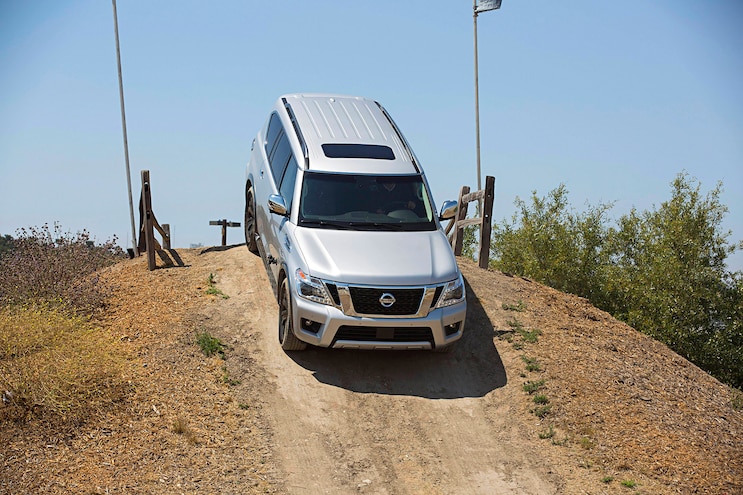 View Photo Gallery | 34 Photos
Photo 9/34   |   2017 Nissan Armada First Drive Review Down The Hill
Despite being tuned for the suburban sprawl rather than the Dubai deserts, the Armada still has what it takes to get the family deep into the woods for an off-the-grid weekend. Four-wheel drive is available, and the Armada uses a traditional two-speed transfer case with a dedicated low-range. Hill descent control is also available and works exceptionally well. While the Patrol’s locking differentials are noticeably absent, brake-bias traction control steps in to keep the Armada moving forward when traction becomes limited.
In our limited time behind the wheel, the second-generation Armada proved to be everything we expected and so much more. Pricing starts at $44,400 for the SV two-wheel drive and climbs up to $59,990 for Platinum four-wheel drive, which places it right in line with the others in its class. And when you consider the features available that price proves to be a downright bargain. We’re beyond excited for the new Armada and are certain that the buying public will embrace it as well. 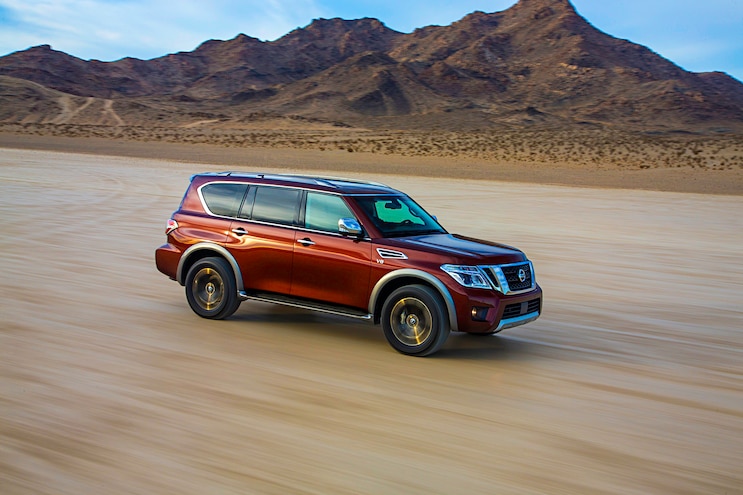 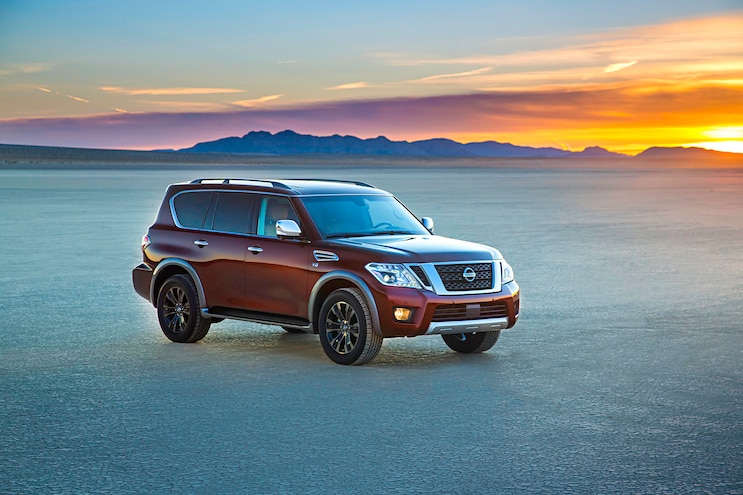 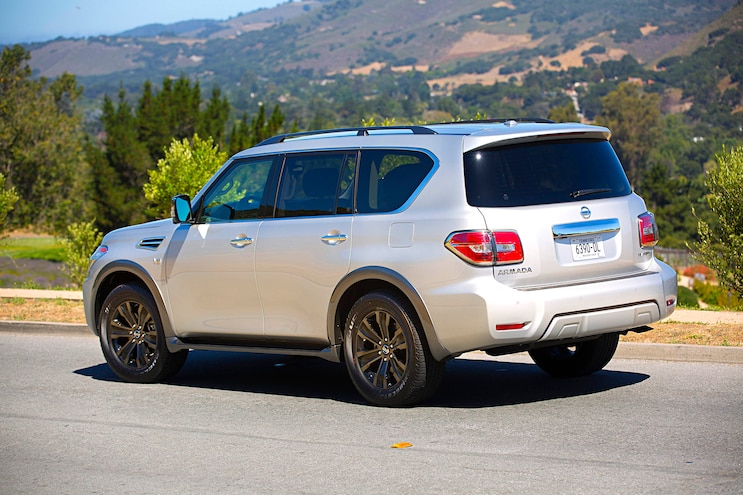