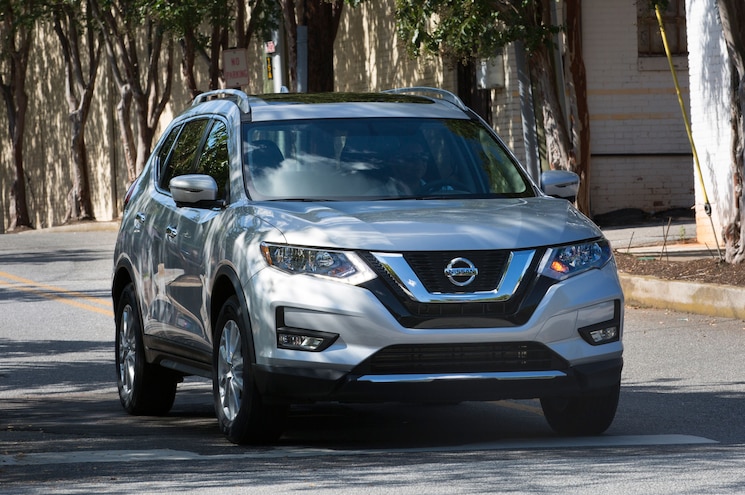 Nissan introduced the second-generation Rogue crossover in 2014, replacing a model that had done reasonably well in the marketplace as the company’s first car-based compact SUV. Although the first-gen Rogue was reasonably popular, it never set anyone’s hearts ablaze, thanks in part to somewhat dowdy styling and an interior with materials seemingly sourced from the same people who make red party cups.
That changed for 2014, when a much more expressive Nissan compact SUV hit the stage and immediately began selling in numbers that rivaled segment stalwarts like the Honda CR-V and Toyota RAV4. In response to the Rogue’s newfound competitiveness (plus the arrival of the lovely Mazda CX-5), the established compact-SUV players redesigned or refreshed their offerings in an attempt to maintain their hold on the segment. 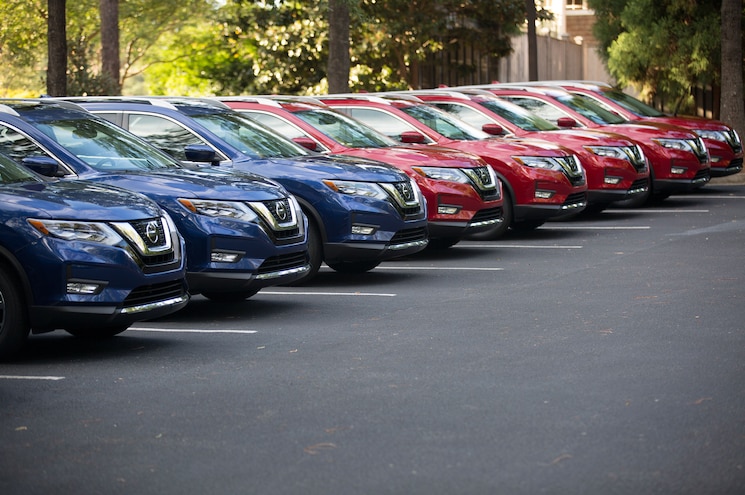 View Photo Gallery | 16 Photos
Photo 2/16   |   2017 Nissan Rogue Lineup
That puts the current Rogue in something of a sticky situation, going from one of the newest to one of the oldest designs in its competitive market in just two model years. Keen on holding off competition, Nissan gave its bread-and-butter SUV a comprehensive refresh for the 2017 model year, bringing attractive new styling, a nicer interior, and a new hybrid option along for the ride. 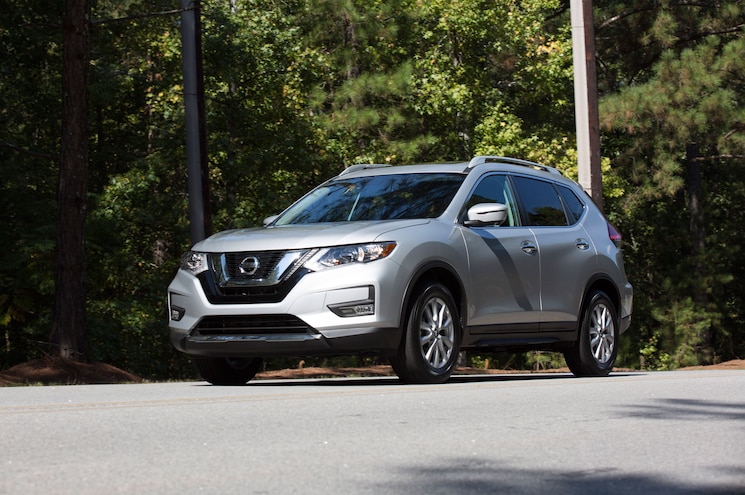 View Photo Gallery | 16 Photos
Photo 3/16   |   2017 Nissan Rogue Sv Front Three Quarter In Motion 01
Foremost, the subtle updates to the Rogue’s exterior make it a thoroughly attractive SUV. Nissan’s V-Motion grille new LED daytime running lamps combine with a sculpted new hood for a surprisingly cohesive look. Furthermore, the tacky, chrome-finished taillamps of the pre-facelift Rogue are gone, replaced by lights with classy, dark-red lenses. Nissan also made changes to the Rogue’s lower third in the way of an extra strip of chrome around the rocker panels, a new rear bumper with skid-plate graphic, and a much more sculpted front bumper with integrated foglights. It’s a great new look, one that we think rivals the segment-best Mazda CX-5. 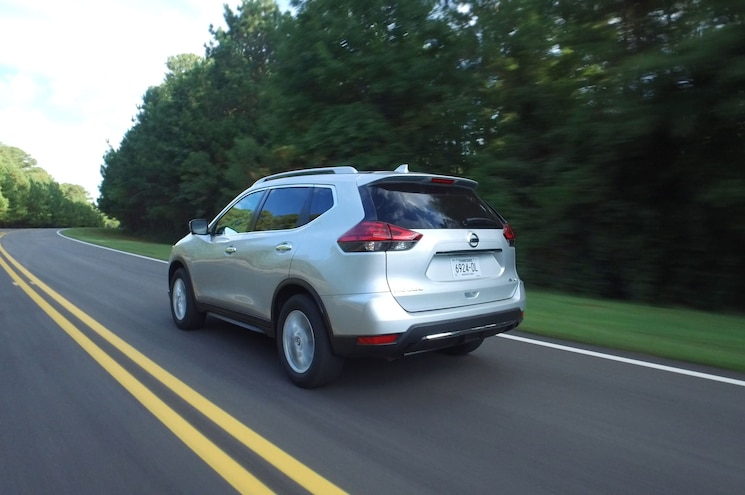 View Photo Gallery | 16 Photos
Photo 4/16   |   2017 Nissan Rogue Sv Rear Three Quarter In Motion 01
We wanted to know how the Rogue compared to its competition, and to that end, Nissan invited us to spend the day in a Rogue SL with the Platinum Reserve Interior package. This top-spec Rogue included gorgeous caramel-colored leather seating with unique stitching, new-to-Rogue 19-inch wheels, and a long list of standard features that would embarrass some luxury cars. On our vehicle (and appearing for the first time in the Rogue) were adaptive cruise control, lane departure prevention, and forward emergency braking.
Immediately upon setting out along Georgia’s two-lane byways, Nissan’s efforts to reduce noise, vibration, and harshness are apparent. The 2017 Rogue provides a surprisingly hushed environment at freeway speeds, with only minor tire noise intrusion and some powertrain droning at full throttle. However, it’s a big improvement over the 2016 Rogue, accomplished via thicker door glass and insulation, improved tolerances with weather seals, and extra sound-absorbing materials in the dashboard and fenderwells. 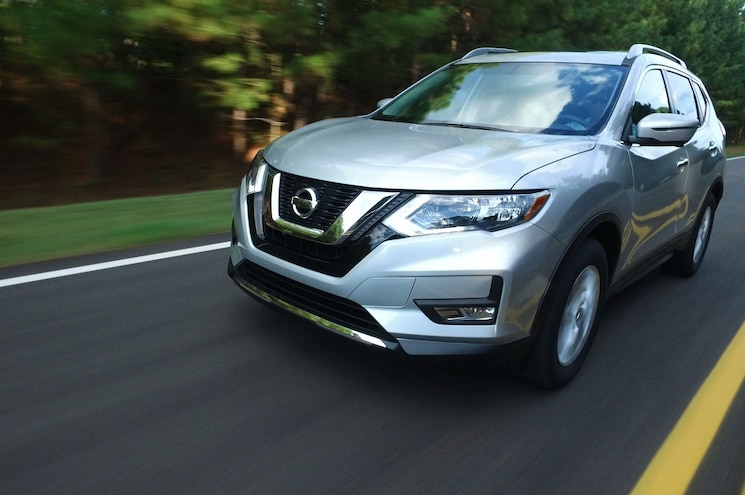 View Photo Gallery | 16 Photos
Photo 5/16   |   2017 Nissan Rogue Sv Front Three Quarter In Motion 03
The quiet environment allowed us to appreciate the efforts Nissan made to update the Rogue’s interior, headlined by the fantastic new steering wheel. The wheel’s thick rim and meaty thumb rests felt great under our palms, and the flattened wheel bottom and tiny center section give the Rogue’s tiller a very sporty look, one we think Nissan should adopt across the board. Other updated interior materials include a new passenger-side dash cover design, new interior accents, and new upholstery for each trim level. 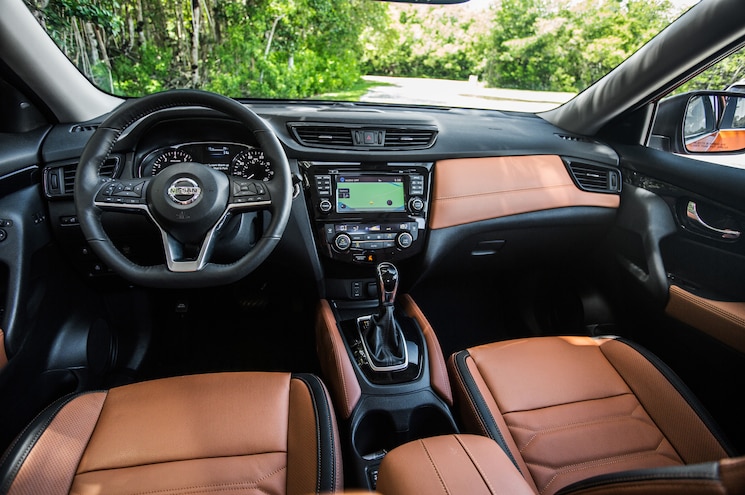 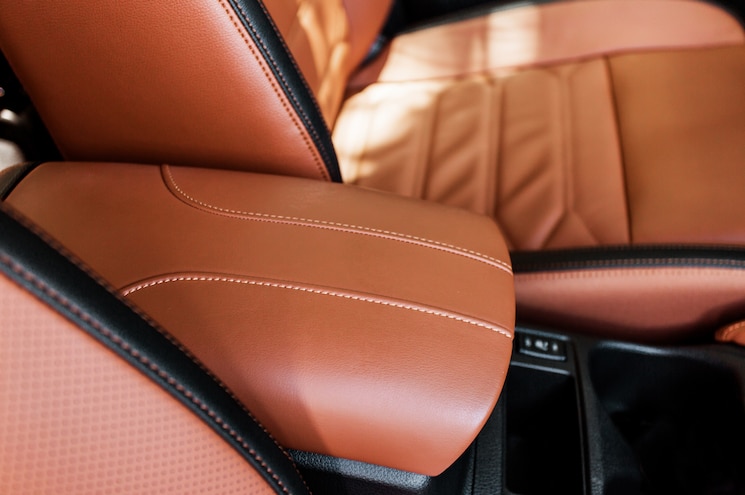 View Photo Gallery | 16 Photos
Photo 7/16   |   2017 Nissan Rogue Sl Interior Armrest
Thankfully, Nissan didn’t abandon the old Rogue’s cargo flexibility, offering a unique Divide ‘N Hide cargo management system that can be configured in 18 different ways to separate, secure, or hide cargo as needed. We used the two-piece system to create a hidden space for our camera bags when the Rogue was parked.
With credits duly given, it’s time to discuss the Rogue’s demerits. Although the company went to great lengths to insulate its noisy 2.5L I-4 from the passenger cabin, the 175hp engine needs to work hard to move this spacious SUV around with any authority. Although the Rogue will easily maintain freeway speeds, passing on two-lane roads would require a lot of planning. Helping the engine in its momentum mission is an Xtronic continuously variable transmission, but even that infinitely adaptable “gearbox” has its drawbacks. Indeed, full-throttle inputs resulted in a lot of high-RPM droning thanks to the CVT, and increased volume didn’t always mean increased speed, especially if hilly driving is on the itinerary. Even so, we must doff our hats to the Rogue’s trip-computer–indicated 31 mpg after a full day of hilly, challenging driving. Hitting the three-oh in the Rogue should be easy. 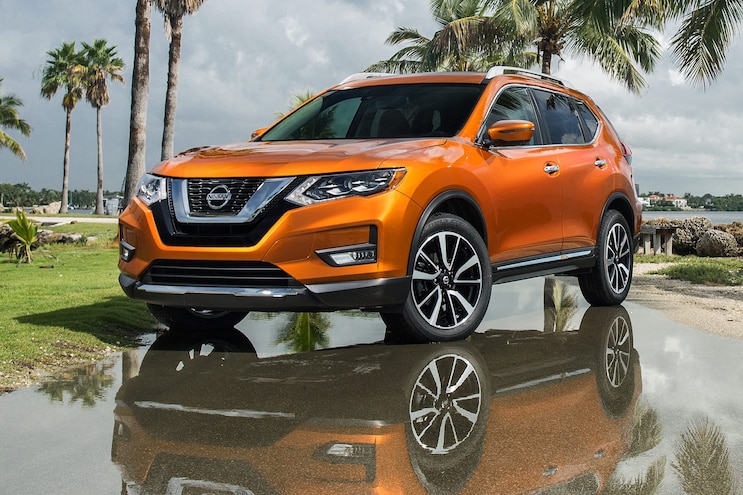 View Photo Gallery | 16 Photos
Photo 8/16   |   2017 Nissan Rogue SL AWD Front Three Quarter 03 E1473458646482
In addition to the SL trim level, the Rogue will also be available as a base S and midgrade SV. Each trim level is available with packages and a la carte options to suit the needs of most buyers, including the S Family Package and SV Family Package. These options take the space used by the Divide ‘N Hide system and turn it into a tiny third-row seat, making the Rogue one of the few compact seven-seat crossovers on the market. Like the similarly configured Dodge Journey and Mitsubishi Outlander, way-back passengers shouldn’t expect much space, but it does turn the Rogue into a decent carpool machine for grade-schoolers and their friends.
Also available in SV and SL trims will be an all-new Rogue Hybrid, which subs in a 2.0L I-4 and a 30kWh electric motor for the regular Rogue’s 2.5L unit. Available in front- or all-wheel drive, the Rogue Hybrid is unavailable with the third row or the Divide ‘N Hide system, as that space is preempted by a 0.8kW battery. Other than that, the Rogue Hybrid has the same cargo and passenger space as its more conventional cousin. We’ll get a chance to drive that later this month, and we’ll report back. 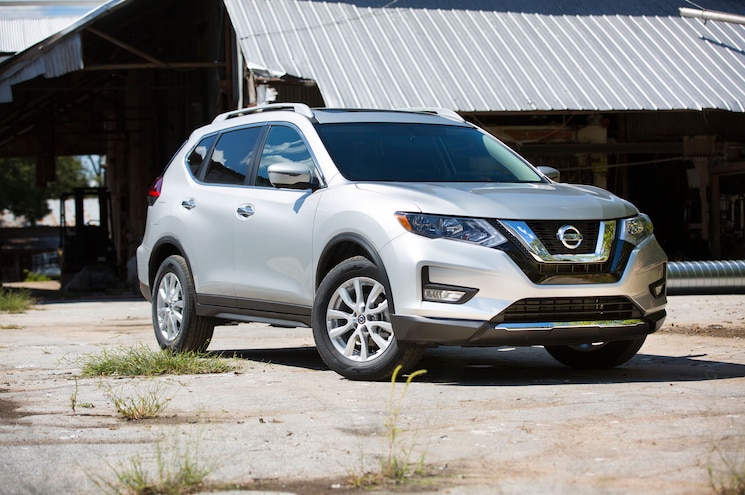 View Photo Gallery | 16 Photos
Photo 9/16   |   2017 Nissan Rogue Sv Front Three Quarter 02
Overall, we came away very impressed with the 2017 Nissan Rogue. Engineers did a good job of tweaking the interior and structure for added interior composure, and the crossover’s segment-competitive dynamics and abilities port over nearly unchanged for 2017. The styling is now at or near the head of the pack, with subtle and effective changes combining for an aggressive, attractive new look. The interior’s new materials and excellent touch points (steering wheel, shift knob, buttons) convey a surprisingly upmarket image, one that’s backed up with luxurious optional extras and a long list of standard features. And the continued availability of either the slick cargo-management system or versatile third-row seat gives the Rogue an extra ace in its deck compared to other compact SUVs. There’s almost nothing to deter us from recommending the Rogue wholesale, thanks to its all-around proficiency at doing things that crossover shoppers love. The improved styling and comfort are just a bonus that will put the Rogue back on the shopping lists of crossover buyers everywhere. 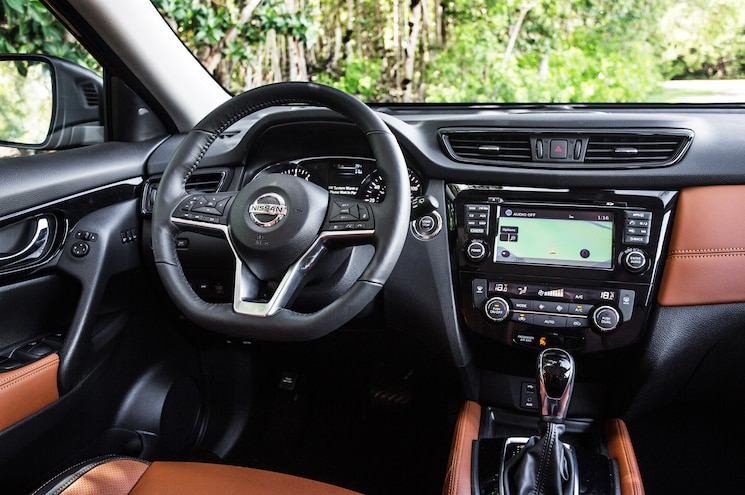