Any takers for a Rambo Caddy? 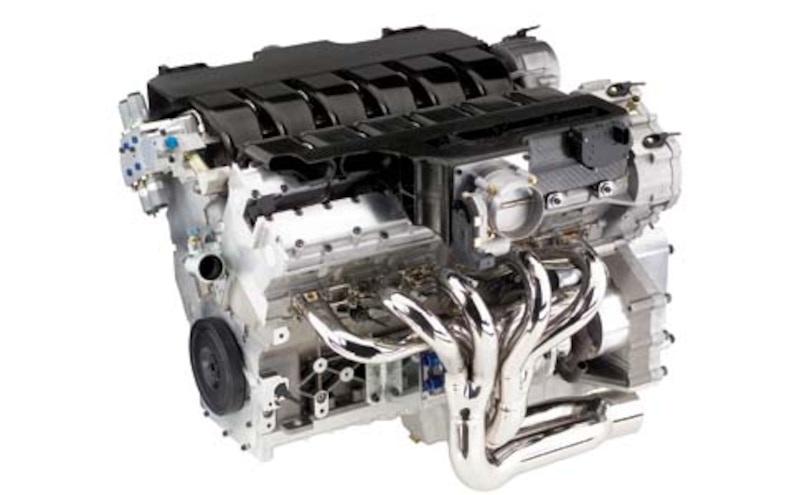 View Photo Gallery | 2 Photos
Photo 2/2   |   2003 Cadillac Escalade V12 Engine View
An engine with more than eight cylinders contributes greatly to a car's ranking as a status symbol, not to mention its performance. In its prewar heyday, Cadillac had not only smooth, torquey V-16s, but prestigious V-12s, too. It's in this vein that GM Powertrain developed the Northstar XV12 concept engine for this year's Cadillac Cien mid-engine exotic. While the Cien, as a production project, is on the shelf for the moment, development of the 7.5-liter XV12 will move ahead.
GM's engineers assembled an XV12-powered Escalade as an R&D toy, and we drove it. No, it's not the first V-12 sport/utility; that distinction belongs to Lamborghini's LM002-the "Rambo Lambo" -of the late '80s. The XV12 is a technology-packed powerplant: 60-degree V-angle, aluminum block and heads, carbon-fiber intake, block-mounted accessories, Displacement On Demand cylinder deactivation, and direct fuel injection are just a few of its features. It's rated at 750 horsepower in Cien trim, but is detuned to a paltry 500 horses for sport/utility duty.
As you'd expect, it's fast and smooth. The V-12's perfectly balanced 60-degree cylinder architecture gives it a turbine-like feel, and it burbles out a sound that speaks decidedly upscale power. The engine's output doesn't feel like 500 horsepower to us, but it's assuredly 400-plus and moves the 5500-pound Escalade smartly. It's especially fun to feel the engine's substantial torque power the truck out of a slow corner, without lots of revs or a need to downshift. To its credit, Cadillac is taking a risk putting the V-12 in the Escalade because the Northstar XV12 won't fit in the engine bay of its cars-the sport/utility is the division's only current product in which the engine can gain some on-the-road miles. At a time when cost cutting and efficiency can ruin the day, it's nice to see this moving forward. Looking down the road, it might find its way under the hood of the next Seville (STS) and/or a full-size Sigma-based flagship sedan-perhaps the next DeVille.
At least, we now know it works in the current Escalade/EXT/ESV platform. Any takers for a Rambo Caddy?