As it rolls off the tongue, the term "small truck" is almost an oxymoron. Trucks are all about tackling jobs cars can't, so the thought of limiting a truck to small jobs doesn't have the same ring as a truck that can handle whatever you might throw at it. In general, the perception is the bigger the truck, the more capable.
Over the past decade, sales of full-size pickups have rocketed, thanks to personal-use buyers flocking to exciting new, big-rig-inspired designs from the Big Three and Toyota. Manufacturers have pumped time and talent into new full-size product, chasing the rich profit margins these vehicles command. At the same time, the less-profitable compact and midsize pickups have been largely ignored, and sales have languished. For the most part, compact trucks became cheap wheels for teenagers or retirees, a small rig the gardener or pool guy tooled around in, or something people drove until they could step up to a full-size. 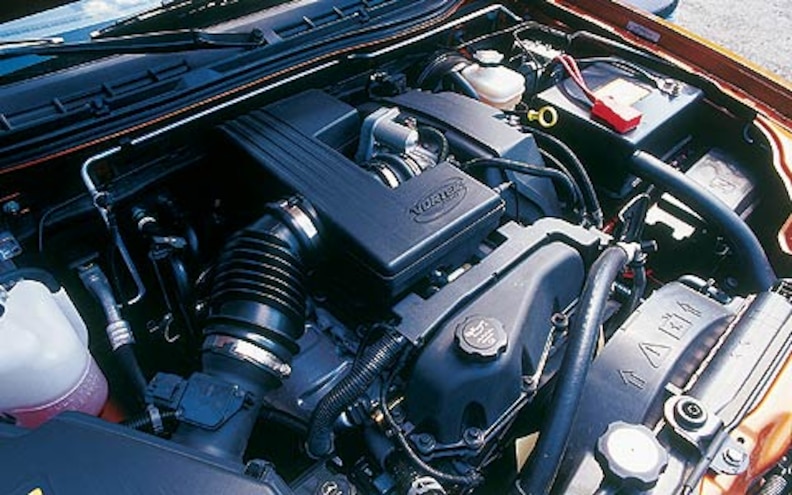 View Photo Gallery | 6 Photos
Photo 2/6   |   2004 Chevrolet Colorado top Engine View
As a result, a lot of people are driving much more truck than they really need. This is more than idle conversation with gas prices rising to $2 per gallon in some areas. Everyone knows you don't need a five-pound sledgehammer to hang a picture frame on the wall.
So the question remains: Is the reason small trucks have faded a lack of interested buyers or a paucity of exciting product?
General Motors is about to bet the farm that the latter is true. At Chevrolet, the compact S-10 is out and the "midsize" Colorado is in for 2004. What constitutes a midsize classification? It's just a question of a few inches here and there, but the perception of a midsize truck carries fewer negatives than a compact one. How does it fit in? The new Colorado's wheelbase is about three inches longer than the previous S-10, and it's about three inches taller, too. Though the new truck is no wider than the S-10, its stance is roughly three inches broader. The Colorado is larger than the Ford Ranger, Toyota Tacoma, and Nissan Frontier, but not as big as the other midsizer, the Dodge Dakota. GM has accomplished this increase without any severe weight gain.
The Colorado's design is a clean sheet of paper. It isn't spun off the TrailBlazer/Envoy platform, nor is it a decontented or downsized Silverado. Rather, it's a completely new truck, the first in the segment since the Durango was redone in 1997. Though the Colorado started out as a joint program with GM-owned Isuzu, as time went on, the General evolved the program (dubbed 355 internally) to deal with North American priorities, while Isuzu honed its version to Asian and third-world needs.

View Photo Gallery | 6 Photos
Photo 4/6   |   2004 Chevrolet Colorado rear Interior View
Underhood is a choice of two all-new inline engines: a 2.8-liter four and a 3.5-liter five. Yes, five cylinders! Spun off the Vortec 4200 inline-six, the engine that powered Motor Trend magazine's 2002 Sport/Utility of the Year, the GMC Envoy, the Colorado's two new engines feature a lightweight aluminum block and head, dual overhead cams, four valves per cylinder, variable-valve timing, electronic throttle control, and coil-on-plug ignition. Both have balance shafts to help tame vibration. And both new engines have a responsiveness that doesn't trail off just above fast idle. There's a pleasing amount of reserve power left at higher engine speeds for merging onto the Interstate or overtaking another vehicle on a winding two-lane.
At 175 horsepower, the new 2.8-liter has the most standard horsepower of any four-cylinder in the market. And the 220-horse 3.5-liter five-cylinder makes 16 percent more power than last year's V-6, with one less cylinder. Fuel economy is equally impressive: up from the S-10 4300 Vortec's dismal 15/18 mpg, to a respectable 18/22 for a 4WD crew cab with automatic transmission. The new inline-five engine is slated for roughly 55 percent of production.
Buyers can choose from a pair of new transmissions as well. Aisin is the supplier for a buttery smooth-shifting five-speed manual transmission with triple-cone synchros on the first three forward gears. It's the match of any manual gearbox you'll find in a Toyota. GM's own Hydra-matic 4L60-E four-speed automatic transmission takes care of autoshift duties and features a snow mode, which allows second-gear starts in poor traction situations. This transmission also sports electronic control of the lockup torque converter, can retard ignition timing during shifts to protect the drivetrain from shocks, and has shift stabilization to prevent hunting between gears when driving over hilly terrain.
Four-wheel-drive Colorados get a new aluminum two-speed transfer case from Isuzu that features shift-on-the-fly capability from two-wheel high range to four-wheel high range and back. The transfer case is controlled electrically by a control panel on the dash, and there's a neutral position to enable the truck to be flat-towed behind a motorhome, even if the truck's equipped with an automatic transmission.
A pleasant surprise is how much interior space GM packed into this truck. Chevrolet says the Colorado has more interior volume than any other compact or midsize truck--more than Dodge Dakota, even though the Chevy's exterior size is trimmer. This is most evident in the new Colorado extended cab, which now has a front-facing rear seat--no jump seats here. The extra room was made possible by moving the steering wheel and instrument panel forward. Also, the Colorado's seat tracks are longer (compared to last year's S-10) to accommodate a greater range of drivers. Although this is obviously a lower-priced truck, the cabin is remarkably quiet, no doubt aided by triple-seal doors, which help reduce interior noise.
There are two bed lengths: regular and extended cabs get a 6-foot-1-inch-long bed and crew cabs feature a 5-foot-1-inch-long bed. These beds are extra deep, giving the Colorado an edge over similar length--but shallower--beds in competitor models in total volume. All beds feature two-tier loading and boast a total of eight tie-downs. Four-wheel-drive models feature a side step carved into the outside of the bed to facilitate easier loading.
Colorado features a new two-position tailgate; it can be lowered parallel to the ground or roughly halfway, to 55 degrees. At this height, the angled tailgate is on the same level as the tops of the wheelwells and depressions in the bedsides, which correspond to a standard 4x8 sheet of building material. The tailgate is lockable, and it's completely removable, too.
Tieing it all together is the Colorado's ladder frame, which GM claims to be some 250 percent stiffer torsionally than the S-10's. You can feel the solidity. This helps pay off GM's move from recirculating-ball to more responsive rack-and-pinion steering in the new pickup. Though the rest of the Colorado chassis specification reads like the compact-truck norm, the stiff frame helps the double A-arm front suspension, leaf-sprung live rear axle and anti-lock front-disc/rear-drum brakes play together like they're on the same team. This is an engaging truck to drive, from the liveliness of the engines to the precision of the manual-transmission shifter and the responsiveness of the chassis. Whether you choose the standard-height Z85, high-riding Z71, or lowrider ZQ8, the same pleasing synergy applies. Chevrolet is offering traction control on 2WD models for the first time--kind of a poor man's 4WD and not widely available in smaller trucks. Other options new to Chevy's smallest truck are XM Satellite Radio ($325), OnStar ($695), and side-curtain airbags, starting at $195.
Maximum towing capacity of the Colorado is down to 4000 pounds, compared to 5900 pounds in the S-10. This reflects new thinking that compact or midsize truck owners don't tow or do a lot of heavy hauling. So why not make the truck more enjoyable to drive lightly loaded? Buyers will move up to a full-size truck if they regularly do heavy towing.
Or maybe they'll just borrow their buddy's Silverado for the next annual weekend outing to Lake Wobegone.

View Photo Gallery | 6 Photos
Photo 6/6   |   Tom Wallace, Colorado/Canyon Vehicle Line Executive
Meet Tom Wallace, Colorado/Canyon Vehicle Line Executive
Truck Trend: GM's calling this new truck a midsize. How is it different from the S-10?
Wallace: We wanted to increase interior space without making the truck too big and infringing on our full-size trucks. Tumblehome was kept to a minimum to maximize headroom. We increased the distance between the driver and front passenger by about two inches, so they're not rubbing shoulders. With our new airbag technology, we were able to move the instrument panel forward, getting it out of the driver's face. We scooped out the doors to make some more elbowroom. And back in the bed, we raised the sides to make the cargo space deeper and roomier.
TT: Can manufacturers make money on small trucks, or are they loss leaders to give CAFE credits against sales of more profitable, but more fuel thirsty, full-size trucks?
Wallace: GM will make money with the Colorado/Canyon because it costs less to build. By designing the new truck for ease of manufacture, we've taken about five hours off the production process. That's roughly 20 percent more efficient.
TT: Why does the Colorado have less towing capacity than the S-10 it replaces?
Wallace: We believe customers who do heavy towing will buy a full-size. The Colorado five-cylinder will tow up to 4000 pounds, which is enough for two Harleys, two snowmobiles, two jet skis, or a small fishing boat.
TT: How does GM view the sport-truck trend?
Wallace: The outgoing S-10 Xtreme model was about seven percent of sales and popular among ethnic groups in the South and West. The lowered Colorado with ZQ8 suspension, 17-inch alloys, a 220-horse five-cylinder, and a manual transmission is a real barnstormer. And it can be ordered with a lot of dealer-installed accessories that can be rolled into the loan. We're thinking sport-truck versions of the new Colorado may get up to 15 percent of sales.
TT: Is there room under the hood for an SS treatment with a supercharger or turbocharger?
Wallace: Stay tuned.

- OF
By Ron Sessions
53 Articles