Is this the next big Jeep?

In the aftermath of this year's North American International Auto Show (NAIAS) in Detroit, the massive Jeep Rescue was the center of attention. The idea of a big Jeep, larger than the existing Grand Cherokee, has been kicked around the halls at Auburn Hills for quite some time, even before the 1999 merger. In fact, the Chrysler Group was reportedly close to green-lighting the project as far back as 2000, but as Chrysler's financial difficulties escalated, the project was first put on hold, then ultimately cancelled.

Fast forward to late 2002, when the planning process was in motion for the following year's concept vehicles, just as the 2003 concepts were being finished for unveiling at the 2003 NAIAS. The idea again surfaced to build the ultimate Jeep--a big Jeep that could go anywhere, do anything, and serve as a lightning rod for future design direction.
Trevor Creed, senior vice president Chrysler Group Design, says, "One of the rationales behind the concepts each year is to not provide too many specific borders beyond those provided by the brand itself...but [a concept] still needs to fulfill the [Jeep] promise." 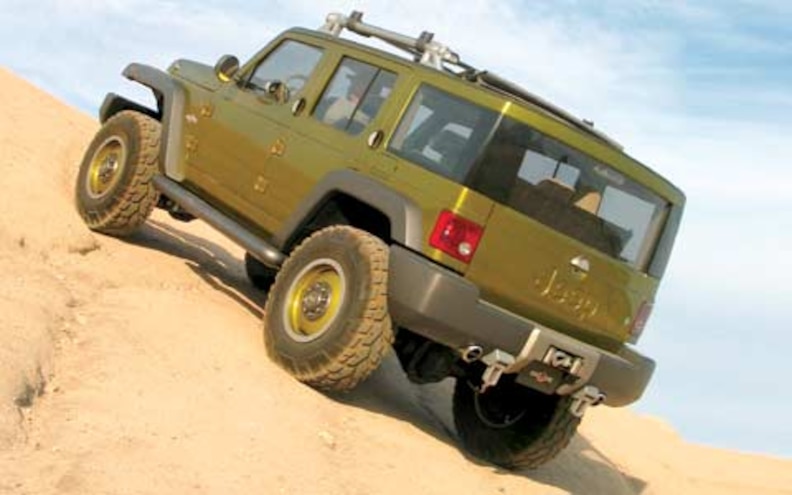 View Photo Gallery | 13 Photos
Photo 2/13   |   2005 Jeep Rescue Concept Rear Drivers Side View Climbing Up A Hill
The Jeep Rescue is a full-size SUV with comfortable seating for seven in its three rows of seats. With removable doors like the Wrangler, the designers at the Jeep Design Studio felt they were developing the ultimate Jeep, not building a vehicle in response to competition in the marketplace. One pointed out that the Rescue was actually the popular Dakar concept, fully realized in a competitive full-size package, not much larger than current category benchmarks like the Chevy Tahoe and Ford Expedition. 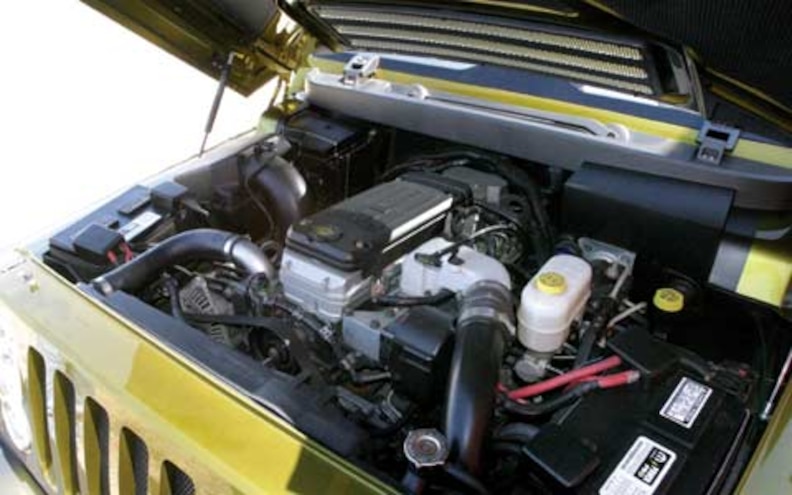 View Photo Gallery | 13 Photos
Photo 3/13   |   2005 Jeep Rescue Concept Engine View
Structurally, the biggest departure for the Rescue is its body-on-frame architecture. This is certainly a throwback to Jeep's earlier vehicles, such as the Wagoneer, last produced in 1991 (see sidebar). Its hydroformed frame is derived from the current Dodge Ram pickup; however, the suspension components bear little resemblance to those found under a heavy-duty Ram.
With an 80-inch-wide chassis and 123-inch wheelbase, the Jeep Rescue is built for anything thrown its way. The front hydropneumatic (airbag) suspension combines with the heavy-duty link-coil rear suspension to give the Rescue solid footing on all terrain. The suspension has adjustable ride height and an additional 4-inch lift available for fording. The 37-inch tires feature an MTR tread and run-flat capability, negating the need for a spare. Onboard tire-pressure control allows the driver to tune tire pressures for maximum traction on all surfaces.

Under the hood, you'll find the same Cummins turbodiesel that powers heavy-duty Rams. With 300 horsepower and 600 pound-feet of torque on tap, there's enough power available for the most demanding search-and-rescue efforts. Rising fuel prices make a turbodiesel's overall efficiency a tempting addition to a truck or SUV. Expect that future Jeeps, including the all-new 2005 Grand Cherokee, will have a turbodiesel option domestically by as early as 2006, when low-sulfur diesel fuel is expected to be available in all 50 states.

View Photo Gallery | 13 Photos
Photo 4/13   |   2005 Jeep Rescue Concept Overhead View Rear Roof Open
No concept would be complete without an assortment of trick features, and the Rescue is no exception. In addition to the underchassis camera rig, the Rescue's list of added features includes a trick 10kW AC electric-power generator for field use, 3D topographical mapping software and topographical navigation system, passive infrared (thermal) cameras for search and rescue, satellite-linked telephone, VHF radio, digital video recorder with satellite transmission capability, four-point retractable harnesses for all vehicle occupants, exterior perimeter lighting, white LED lighting for long-distance visual search and reduced power use, folding seats in the rear of the vehicle, and twin winches, front and rear, integrated into the bumpers. Together, these features give the Rescue unequalled rescue capability.

View Photo Gallery | 13 Photos
Photo 5/13   |   2005 Jeep Rescue Concept Under Carriage View
At the Detroit Auto Show, primary interior designer Dan Zimmerman, senior designer, Jeep Product Design Studio, said, "We were able to push the envelope of the design by bringing in elements of extreme off-road enthusiasts with the design of industrial equipment or power tools." Two examples are the seats and the advanced sat-nav system. "We studied many different off-road seat applications before creating the final design," says Zimmerman. "I studied the air-ride seats in tractor-trailer cabs, motorcycle seats, excavating-equipment seats, and mountain bike suspension. The seat base utilizes adjustable mountain-bike shock absorbers to help dampen the ride when the terrain gets rough.
While the sat-nav system has capabilities far beyond those found in contemporary OEM systems, it's possible that a system with similar capabilities might be available in the aftermarket in the next 18-24 months.

Given recent statements from Chrysler Group management, there is continued speculation that the Jeep line will be expanded with one or two new models in the next 24 months.

View Photo Gallery | 13 Photos
Photo 6/13   |   2005 Jeep Rescue Concept Interior View Front Cabin
Most of the speculation has been centered on an entry-level car-based Jeep, slotted below the current Liberty and priced below $16,000. Much of the remaining speculation is centered on a stretched version of the upcoming 2005 Grand Cherokee, with competitive third-row-seating. Reading the tea leaves from Auburn Hills, others believe the longer version of the Grand Cherokee will feature substantially different bodywork to better compete in the over-$40,000 full-size SUV category. While we like the look of the new Grand Cherokee, incorporating the Rescue's bold design in a full-size Jeep could make it stand out among the competition. Since its unveiling at the 2004 NAIAS, feedback on the Rescue has been almost universally positive with regard to its design and especially its styling. If we're about to see the reintroduction of a full-size Jeep, we encourage Jeep's product team to not stray far from the Rescue's innovative package.

There's probably no single company more connected with the development of the modern SUV than Jeep. The design DNA of the Jeep Rescue goes back to 1947, when Willys introduced its first postwar station wagon, available first in two-wheel drive, featuring a Brooks Stevens-designed all-steel body. In 1949, the station wagon incorporated four-wheel drive, making it the first sport/utility vehicle.

This green 1962 example (pictured) belongs to Larry Howlett from Orange County, California. About the same size as a contemporary Jeep Liberty, Howlett's station wagon can still cruise at 70 mph while getting almost 20 miles per gallon.

View Photo Gallery | 13 Photos
Photo 13/13   |   2005 Jeep Rescue Concept Interior View Steering Wheel Emblem
Another link in the Rescue's evolutionary chain was the Kaiser Jeep Wagoneer, introduced as a 1963 model. The Wagoneer offered a number of firsts to the emerging SUV category: automatic transmission, V-8 engines, and fac-tory-installed air-conditioning. The yellow Wagoneer pictured is a rare 1969 Super Wagoneer owned by the author. Costing as much as a contemporary Cadillac--around $6000 in 1969--it featured as standard equipment a 350-cubic inch Buick-sourced V-8, a Turbo HydroMatic three-speed automatic transmission with console-mount-ed shifter, bucket seats, air-conditioning, vinyl roof, and unique gold-anodized trim on the sides and tailgate. The last Grand Wagoneer rolled off the Toledo, Ohio, assembly line in 1991.
With its slab-side exterior design, it's easy to see where Jeep's designers got their inspiration for the Rescue. Parked side by side, from its vertical grille to the trapezoidal wheel-arch openings and other Jeep design cues, the Rescue knows from where it evolved--an unbroken string of evolution and innovation.

- OF
By Rich Truesdell
33 Articles