This super high passenger van does it all

Pooler, Georgia, is the assembly point for Sprinters as well as the location of Roebling Road Raceway. This made it an appropriate destination for our first look at this van. Taking the Sprinter to the track would provide a chance to test its towing utility and its usefulness as a weekend apartment and all-around headquarters.

The Sprinter is available in commercial and consumer versions, with three different wheelbases (long, extra long, and incredibly long) and two different heights (tall and funny looking or even taller and funnier looking) for consumers. The passenger versions (eight- and 10-seat configurations are available) feature fixed windows in the passenger space, and panel versions are available for people without friends or family. 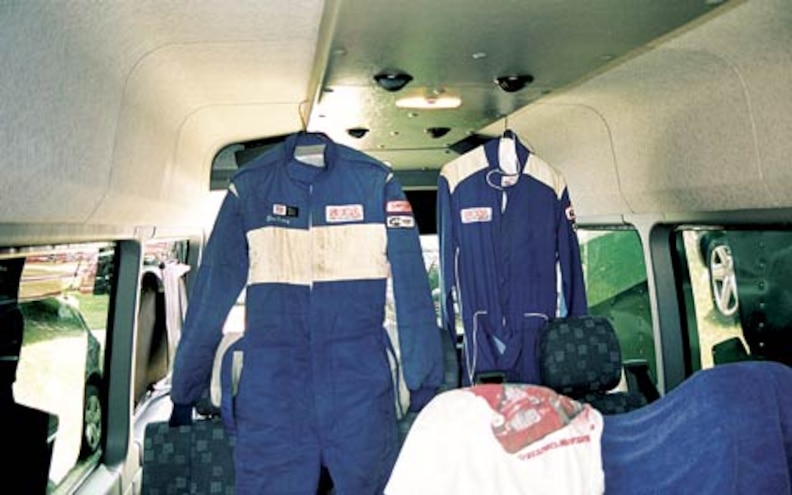 View Photo Gallery | 5 Photos
Photo 2/5   |   2004 Dodge Sprinter Interior View Uniforms Hanging Up
Pickups and SUVs have largely assumed the role of tow vehicles for hauling boats, horses, race cars, and motorcycles, as the full-size, rear-drive van market has languished. With that in mind, Chrysler cancelled a new van that was under development a couple of years ago, opting instead for the Mercedes-Benz Sprinter van favored by commercial customers all over the Continent. 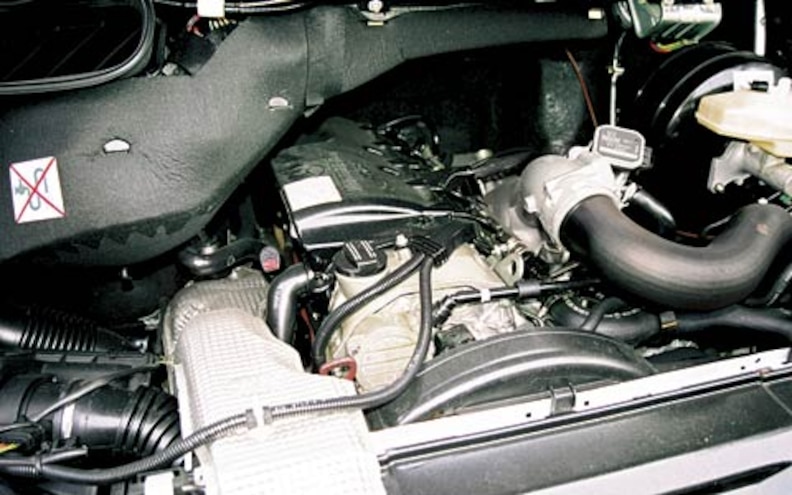 View Photo Gallery | 5 Photos
Photo 3/5   |   2004 Dodge Sprinter Engine View
Commercial customers in the U.S. have quickly adopted the vans, which sell here as both Freightliner and Dodge vehicles, for urban parcel delivery and hotel airport shuttle service. But we wanted to know what the passenger version is like for family hauling and recreational towing.
The sturdy, body-on-frame rear-drive, 3/4-ton Sprinter 2500 is well-suited to towing, and its commodious interior can take as many people and luggage as you're likely to need. Ours comfortably seated 10.
The potential weak link for people pondering the possibilities of such a vehicle is the 154-horsepower, 2.7-liter common-rail fuel-injection five-cylinder turbodiesel powerplant. The company claims 22 mpg for the van, but with a vehicle of this size and the frontal area of a billboard, that seems optimistic.

Towing a 950-pound Formula Ford race car on a 500-pound flatbed trailer and carrying another couple hundred pounds of tools and spare parts inside the gigantic cargo area, we got 13 mpg, with the cruise control set on 70 mph much of the time. Four refills of the 26-gallon tank showed this was a consistent result, not the outcome of unusual circumstances. Around town, with less aerodynamic drag and with no trailer, the van ought to achieve economy in the 20s without difficulty.

View Photo Gallery | 5 Photos
Photo 4/5   |   2004 Dodge Sprinter Rear Passenger Side View Door Open
The little motor pulled the light trailer smartly at highway speeds, but the Sprinter makes use of a few of the five gears in its automatic transmission when climbing even slight grades and loses speed on steeper hills. With a heavier trailer using more of the van's 5000-pound towing capacity, steep hills wouldn't be much fun.
The company brought the Sprinter into the U.S. nearly unmodified from its European-tuned specifications just to get a product on the market, and the vehicle is ideal for several applications here. But it would be even better with a bigger optional engine, such as the Cummins turbodiesel used in the Ram pickups. The van is built in 3/4- and one-ton versions, so there isn't much doubt that it's strong enough to accept that engine's output. An updated version of the Sprinter is scheduled for a few years from now, so if this lighter-duty hauler doesn't suit your purposes now, maybe a future model will.
The Sprinter's interior could be called cavernous, except that there are plenty of caverns that aren't as large. Motorcycles, ATVs, kayaks, and more will not only fit inside the Sprinter--you wouldn't need a trailer--they'll fit with space left for passengers and supplies.
For the race weekend, I used the six feet behind the last row of seats to carry toolboxes and parts en route. At the track, I unloaded the cargo and inflated my double-bed air mattress with a compact shop vac, using the cargo hold as a bedroom for the duration.

Camping in the van at the track was quite pleasant, thanks to the generous amount of space inside. The temperature inside the Sprinter was comfortable as well. With the roof-mounted rear air-conditioning unit, the van quickly chills the interior to a nice temperature. An option to run that supplemental air-conditioner on 110-volt AC shore power would've been a nice addition, so I hope they'll consider that possibility.

View Photo Gallery | 5 Photos
Photo 5/5   |   2004 Dodge Sprinter Door Jamb
A plastic ceiling-mounted distribution channel carries cool air from the A/C forward. This cuts into the 73 inches of interior headroom, but only in the middle of the van. On both sides there's still plenty of space for most of us to stand upright while changing into a driver's suit, riding gear, wetsuit, or whatever manner of attire is required by your particular activity. Even the low-top version has 64 inches of headroom, if you don't mind hunching over a bit.
Interior amenities were a curious mix of commercial-cargo-van Spartan and European luxury-brand rich. The rubber floormat made vacuuming Roebling Road's sand out of the interior an easier task, but it wasn't exactly Berber carpeting, for those looking for that kind of thing. And a CD player isn't even available as an option with the AM/FM/cassette stereo. That radio did, however, have startlingly good reception.
On the luxury side, the Sprinter featured heated bucket seats for both front-seat occupants, power windows and locks, and enough thermostatically controlled HVAC capacity to provide the physical plant for a small apartment building. More important, the Sprinter is equipped with standard anti-lock brakes and Electronic Stability Program stability control to help keep the shiny side up.
At the other end of that steering wheel, the wheels turn to sharp angles left and right, giving the Sprinter a tight turning radius (36.7, 42, and 47 feet for the 118-, 140-, and 158-inch wheelbases, respectively) that makes the van no harder to park than say, a Suburban, despite its significantly greater length. Feel through the steering wheel is good, making it easy to keep the Sprinter on track.

On the highway, the accurate steering was a help, because the Sprinter's huge profile made it susceptible to buffeting from the bow shock off tractor-trailers when passing them. And the tall van has a high center of gravity, giving the Sprinter the feeling of a sailboat heeling from one side to the other when it crosses over the center of a crowned highway, as when changing lanes on the Interstate.
Getting into the driver's seat takes a bit of effort because of its height, made worse by the lack of a grab handle to assist the ascent to the summit. Once in place, I couldn't find a seat position that didn't leave my view of the left-side mirror split by the window divider in the driver-side door. Fortunately, the Sprinter was equipped with convex towing mirrors on both sides, which provide an excellent view of the road around the van, but the obstructed view of the flat mirror was consistently distracting.
The view is excellent otherwise, with a large windshield and windows all around providing a clear view of surroundings. People who have an equally clear view of what they want in their next utility/recreation machine should take a close look at the Sprinter. One of its six variations of length and height is likely to provide an interesting option for a wide variety of activities. And maybe if we buy enough Sprinters, DaimlerChrysler will think about giving us a stronger engine for true heavy-duty towing duty.

- OF
By Dan Carney
19 Articles