The Biggest Just Got Bigger, International RXT is a Friendly Sibling to CXT 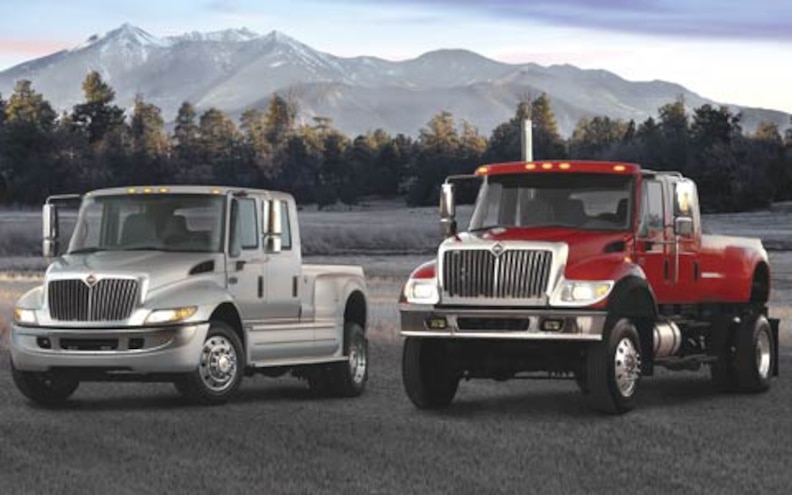 In a sea of big trucks, certainly none stands taller right now than the International CXT--the world's largest production pickup. We know from experience that you can't drive a CXT without someone flailing his arms at you or kids running up to you in parking lots wanting to sit behind the wheel. At 10 feet tall with a big-rig personality, yet wearing a familiar one-ton pickup-truck bed, the CXT gets attention wherever it goes, whether it's parked or on the road. Likewise, since the CXT went on sale (and International tells us it's selling about 40 a month), it's been getting a lot of attention from newspapers, magazines, and television; we even had it on our cover two issues ago. But getting all of this attention was only part of International's plan.
Now it moves on to Phase Two.
Introduced at the Chicago auto show (company headquarters are just down the road) are two kinder and gentler International trucks; the first called the RXT, the second the MXT. Think of the RXT as a smaller, two-wheel-drive version of the CXT, with a less aggressive stance--less intimidating size and mass. Based off a slightly smaller platform, the RXT has smaller wheels and tires, is two feet shorter, offers an integrated set of sidesteps, and has a smaller V-8 turbodiesel (VT365) with an Allison five-speed transmission. International's CEO called the RXT sleeker and sportier, with a stronger, more athletic look. Certainly, the integrated body lines, color-matched bumpers, and lower skirts molding into the bed give the RXT a unified look. We're told RXTs will go on sale this fall at a starting price of $70,000.
Also at the RXT's coming-out party was a concept Project XT, which allowed International designers to play with skylights, body spoilers, and a custom wide-mouth pickup bed without any wheelwell humps in the tub. That particular truck also has the VT365, but it's tuned for 300 horsepower. 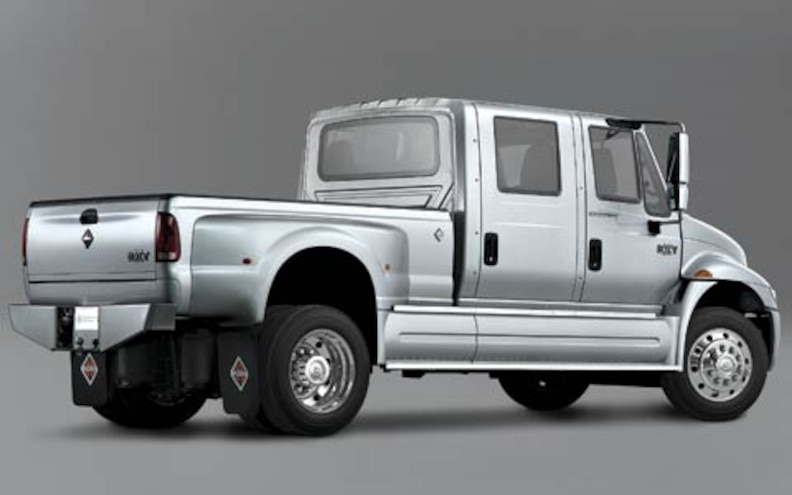 View Photo Gallery | 5 Photos
Photo 2/5   |   The bed, although modified, is still a standard-issue one-ton dualie Ford. The smaller tires and two-wheel-drive setup allow for a much lower load-lift height--by more than 18 inches compared with the CXT--but still requires a ladder to climb into the bed. For loading purposes, use a forklift.

View Photo Gallery | 5 Photos
Photo 3/5   |   Side by side, the RXT and CXT share a definite family resemblance but the differences are clear. RXT models will be two-wheel drive, built on a smaller platform, and have a more proportioned overall look.
Don't think for a second that the company's stopping there. From what its design and marketing people are saying (and we may have overheard a few conversations), it's planning on going even smaller, entering the 3/4- and one-ton light-duty segment relatively soon. International was quick to mention it still owns the Scout name, so we're guessing a diesel (maybe hybrid) SUV is in its future. Should be interesting.
The Concept Project XT is a styling exercise. A smaller front grille, more integrated body panels, and a custom high-walled bed (that doesn't have wheelwell humps) are just a few of the proposals that might make it into the next-generation International pickup. In addition, Project XT has a 300-horsepower VT365 engine, dual skylights, a widescreen DVD entertainment system, front and rear cab spoilers, and an adjustable airbag suspension.
The runt of the family and the one most likely for personal use, the MXT should look familiar; it was the cover story for Truck Trend's July/August 2004 issue, as we highlighted the SmarTruck III with all its military sophistication. Eventually, MXTs will be offered with either a coil-link or airbag suspension option in 4x4 and 4x2 configurations. Although technically a preproduction prototype, this MXT is ideally suited for work duties such as ranching, construction, race-car hauling, and boat towing. This prototype has automatic slide-out steps, a custom rollout bedcover, and five fully harnessed racing seats.